Taittinger is located in Reims, one of the two epicenters in Champagne. This is the high-rent district, full of all the glitz that is such a big part of the grand marque image. In many ways, though Taittinger stands apart from its peers. Deeply held family values – so often a rarity today – inform everything that happens here. Pierre-Emmanuel Taittinger, founder Jean Taittinger’s grandson, bought the family business back from Starwood Capital Group in 2006, and is now at the helm. Taittinger has built a very strong team around him, always the sign of a true leader. Every detail is given the utmost attention, something that is evident each and every time I visit the winery. Just as importantly, production of the dual flagships Comtes de Champagne and Comtes de Champagne Rosé remains tiny next to most other tête de cuvées, ensuring that quality is consistently high. 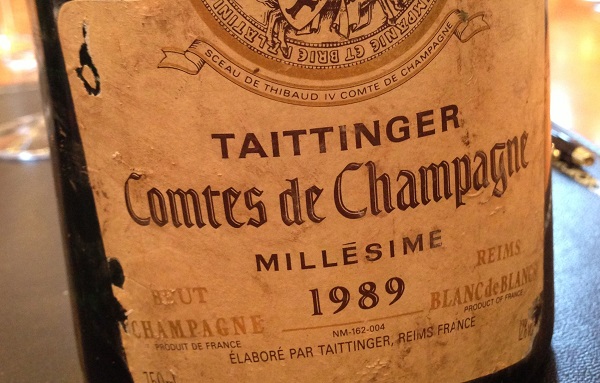 First produced in 1973, Taittinger’s Comtes de Champagne Rosé is one of the most singular wines in Champagne. Pinot Noir is front and center in Comtes Rosé. About 70% of the blend is Pinot (mostly from Ambonnay, Mailly, Verzenazy and Verzy), which includes 12-15% still Pinot from Bouzy, a village that is known for the power and resonance of its wines. Chardonnay comprises 30% of the blend and is sourced predominantly from sites in Avize, Mesnil and Oger. Today, dosage is around 9 grams per liter, down from the 12-13 or so that was customary during the 1980s and 1990s. One of the things I appreciate most about Comtes Rosé is its ability to deliver considerable pleasure throughout its entire life. Every wine in this vertical is gorgeous, but all for different reasons. 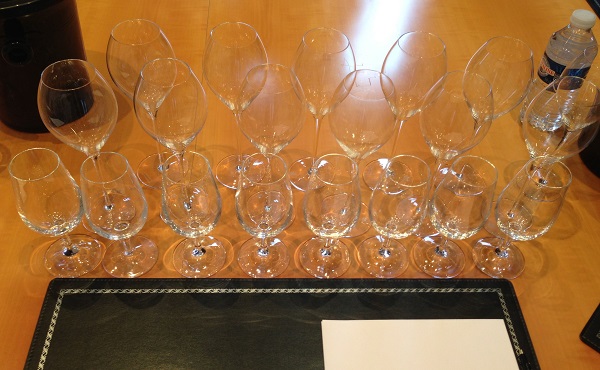 A dazzling, totally seductive wine, the 2006 Comtes de Champagne Rosé brings together finesse and power. In this vintage, the weight of the Pinot is especially evident. Highly perfumed, expressive aromatics find a gorgeous counterpoint in the vivid, chiseled flavors, while the huge, resonant finish leaves a lasting impression. The 2006 Comtes Rosé is a fabulous Champagne to follow over the next two decades-plus. 94+/Drinking window: 2016-2036. The 2005 Comtes de Champagne Rosé is a wine of contrasts. At first rich and vinous on the palate, the 2005 turns more delicate with time in the glass as its silkier and floral qualities become more evident. Sweet red berry and spice notes linger on the delicate finish. 93/Drinking window: 2014-2025.

Initially quite reticent, the 2003 Comtes de Champagne Rosé need a lot of air to open up, which is frankly a bit of a surprise, given the extremely warm vintage. Dried rose petals, and sweet red berry fruit are the signatures. Overall, the 2003 Comtes Rosé is a bit light and lacks the structure of the best wines. It is best enjoyed over the next decade or so. Readers should plan on giving the 2003 a good bit of air. This is an unusual vintage for Taittinger, as there is no Comtes the Champagne Blanc, the result of a crippling April frost that took with it 90% of the Chardonnay production. Because of the scorching hot summer, all the fruit was harvested in August. 92/Drinking window: 2014-2023. A round, voluptuous wine, the 2002 Comtes de Champagne Rosé bursts from the glass with notable energy and intensity. Blood orange, pomegranate and sweet spices are all very much alive in a huge, resonant Champagne built on pure power. At the same time, the 2002 is silky and polished to the core. The 2002 is a fabulous Comtes Rosé in one of the truly great vintages for this iconic house. 95/Drinking window: 2014-2032. 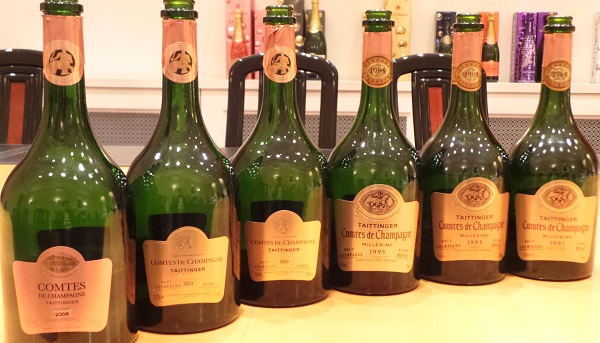 Dried rose petal, leather, anise and dried cherries are all laced together in the 1996 Comtes de Champagne Rosé. Subtle, pretty and highly nuanced, the 1996 is in the early part of its drinking window. Within the context of the year, the 1996 is relatively soft and accessible. It is best enjoyed over the next few years. 93/Drinking window: 2014-2021. The 1995 Comtes de Champagne Rosé is starting to show the signs of maturity in its aromas and flavors, yet it remains powerful, explosive and decidedly masculine. Hard candy, dried flowers, mint and sweet red berries meld together gracefully in the glass. Deceptively medium in body, but with broad shoulders and notable intensity, the 1995 has enough depth and stuffing to drink well for at least a number of years. 94/Drinking window: 2014-2025.

A stunning, totally drop-dead gorgeous wine, the 1993 Comtes de Champagne Rosé is intense and deep to the core. Even at 21 years of age, the 1993 possesses stunning richness and tons of pure resonance. Blood orange, spices, dried flowers and anise blossom from the glass in an effortless, totally gracious Champagne. The 1993 won't live forever, but it is striking now and should continue to deliver the goods for another 5-10 years. Hints of truffle, dried cherry and spice linger on the exquisite finish. 95/Drinking window: 2014-2023. The 1991 Comtes de Champagne Rosé is incredibly subtle, lifted and delicate. Dried cherries, wilted flowers, mint, sweet spices, tobacco and white truffles are all effortless in this highly nuanced Champagne. Seamless, textured and utterly impeccable in its balance, the 1991 is firing on all cylinders today. What a beautiful, eternal wine this is. The 1991 is just beginning to enter its tertiary stage of development. Well-stored bottles will drink well for at least another handful of years. 95/Drinking window: 2014-2021. 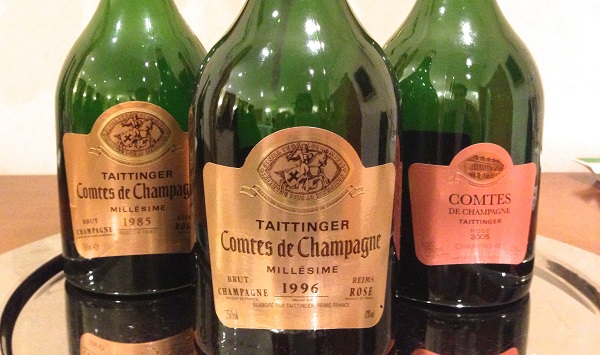 The 1985 Comtes de Champagne Rosé has developed into a rich, ample wine built on pure texture. Leather, smoke and tobacco are some of the nuances that open up before the intense, Pinot-inflected fruit takes over all the senses. The 1985 is a bit more forward in its aromatics than on the palate, which suggests it is best enjoyed sooner rather than later. Still, there is a lot to like here, especially for readers who favor ample, resonant Champagnes. 92/Drinking window: 2014-2020.