Jacques Selosse: A Study of Substance

Anselme Selosse is one of the pivotal figures in the modern history of Champagne. Selosse’s meticulous attention to detail in the vineyards and bold wines inspired a whole generation of younger growers, some of whom spent time working alongside him, and others who were captivated by a vision of Champagne as a wine that is, first and foremost, born in the vineyard. This recent tasting, hosted by Mannie Berk and the Rare Wine Co., provided a remarkable opportunity to check in on a number of disgorgements of Selosse's flagship Substance going back to the early days. All of the wines in this article were tasted over dinner at Jardinière in San Francisco. Wine Director Alan Murray did a fabulous job handling the wines, while the food was absolutely brilliant. It was a tremendous evening all around. Much of the historical background for this article is taken from a conversation I had with Selosse prior to the tasting itself.

Anselme Selosse’s Champagnes are coveted the world over for their unique, bold personalities. Over the years and decades, Substance has arguably become Selosse’s most sought-after Champagne. A rabid core of fans snap up the 3,000 bottles produced annually upon release, while the wines disappear from restaurant wine lists just as fast as they appear. For that reason, very few people have a chance to taste these wines with years of post-disgorgement age. But Substance is also a controversial wine that is often cited as an example by those who believe the Selosse style is too oxidative. I, too, was curious to see how Substance develops in bottle across multiple disgorgements. Moreover, I was intrigued by the concept of a retrospective of a wine whose sole purpose is to negate the effect of vintage. At the end of the night, I could only marvel at how well these wines have aged. With a few exceptions, most of these Champagnes still have a lot to give. 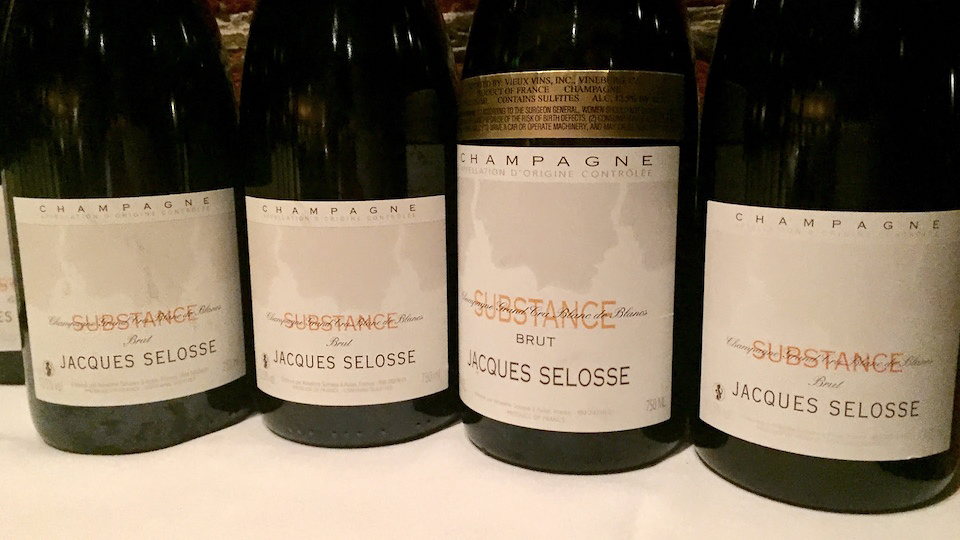 A young Anselme Selosse studied viticulture in Champagne and then in Burgundy. Selosse worked his first harvest at the family domaine in 1974 and took over the estate formally with his wife, Corinne, in 1980. “At the time, we made about 7,000 bottles under our own label,” Selosse recounted. "We sold the rest of our fruit to Lanson and Roederer.” Selosse lowered yields and work his land in a more natural and non-interventionalist manner than was common at a time when yields and high production were the objectives of most houses. The grower Champagne movement is now in its second generation, but in the 1970s and 1980s, the concept of small, artisan, estate-bottled wines in Champagne was radical. Readers who have tasted some of Selosse's finest wines from this era, such as the 1988 and 1990 vintage Champagnes, know they remain riveting and vivid to this day. Throughout the years and decades, Selosse has always remained a pragmatist. While he generally pursues more natural approach to making wine, Selosse has long rejected some of the more rigid schools of thought that have become all the rage in recent times. The objective is to make the best wines possible rather than being strictly wedded to ideological principles that may not always deliver the most optimal results.

“Early on I noticed that in Champagne, the prestige of a wine was set by its vintage, in other words, its birth year, whereas in Burgundy, the prestige of a wine was determined by site, where it came from,” Selosse told me recently. “I started to think about how to add a greater sense of place to my wines, to emphasize terroir. Of course, that is not possible beyond a certain point, so I arrived at the idea of trying to completely erase the effect of vintage.” 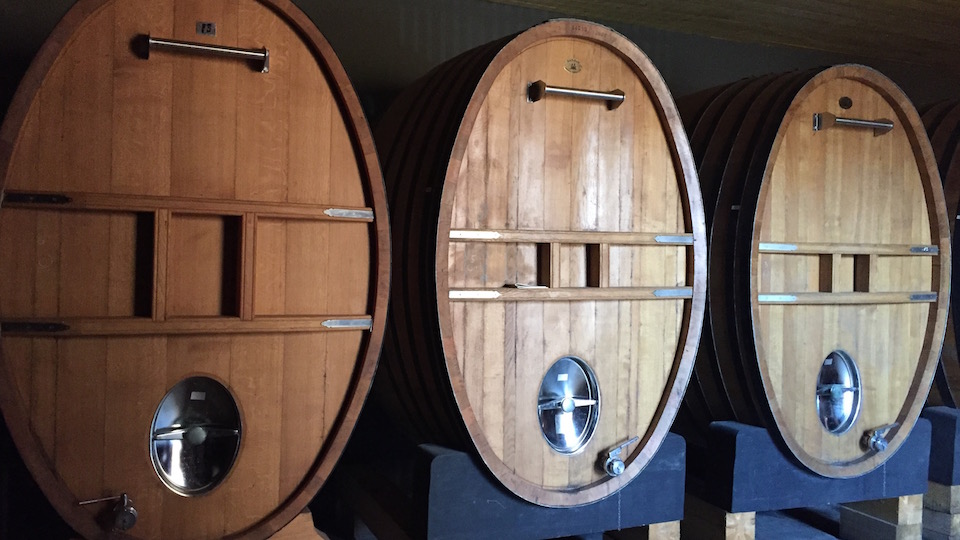 Casks in the Selosse cellar, Avize

“In 1972 I traveled to Spain and saw a number of producers,” Selosse told me. “I remember we visited López de Heredia. I didn’t even know who they were! Can you believe that? But it was the time I spent in Jerez that planted the early seeds for what would become Substance. In the mid 1980s I decided to adopt the solera style, which is used for the production of Sherry (Jerez) for Champagne. Substance includes all vintages, good, bad and average; hot, cold and normal. In theory, all of those differences should net out in the blend.” Selosse christened his new wine ‘Origine.’ Unfortunately, Selosse did not copyright the name and in 1998 was forced to change it, thus giving birth to Substance.

The term solera is most often used loosely in Champagne to refer to wines made with what is more accurately described as a perpetual reserve in which the wine from a base vintage is blended with the reserve wines of all previous vintages. Selosse’s own lieu-dit Champagnes are made with this approach, and the blending is done just prior to bottling. For Substance, Selosse employs a true solera approach, with two levels of reserve wines (or criaderas), one aged in cask and the other in tank. The youngest vintage accounts for about 22% of the volume and is aged together with the reserve wines rather than blended in at the end. Among other things, this means that the influence of the most recent vintage is not perceptible. Substance then spends about 6 years in bottle prior to being disgorged and finished with very low dosage. 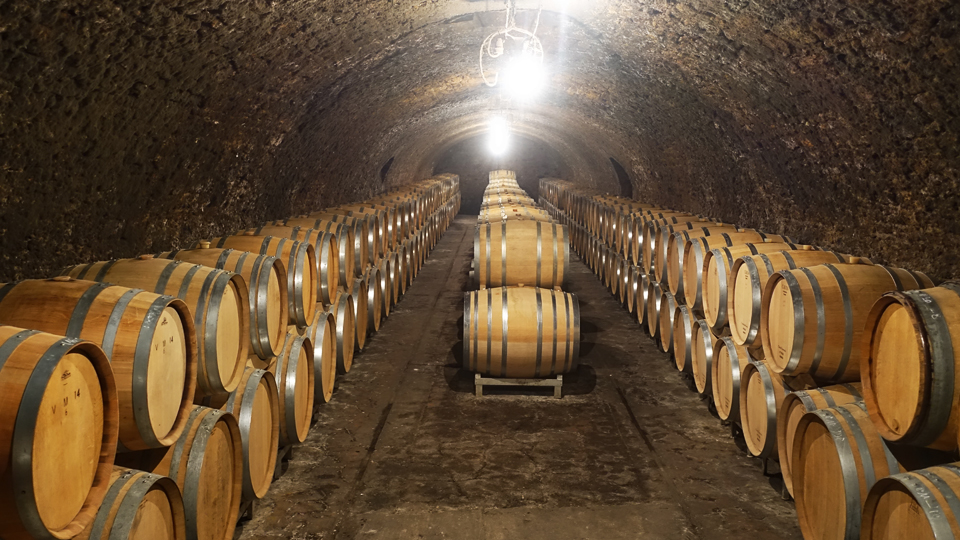 From the beginning, Origine (and later Substance) has been a blend of two sites in Avize. Les Chantereines is a steep, east-facing slope with clay-rich soils, while Le Mont de Cramant is a south-facing, hillside site planted on chalky soils. Les Chantereines is also used for the vintage Champagne and bottled separately as one of the six wines in Selosse’s boxed collection of lieu-dit Champagnes.

The history of Origine begins in 1986, although Mother Nature threw a few curve balls as Selosse was getting his new project started. In 1987, Champagne was dealt a very challenging growing season. Rain and rot were rampant. Selosse was only satisfied with two of his parcels, Les Chantereines and Le Mont de Cramant, both of which were harvested on October 26, exceedingly late for Champagne. As a result of the overall poor quality of the harvest, Selosse did not make a vintage Champagne, which would have come from Chantereines and Les Maladries du Midi, but instead bottled a small amount of pure 1987 Origine as a NV Champagne. The first release of Origine as a solera Champagne was composed of the 1986, 1987, 1988, 1989 and 1990 vintages. It was bottled in 1992 and sold in 1997 and 1998. 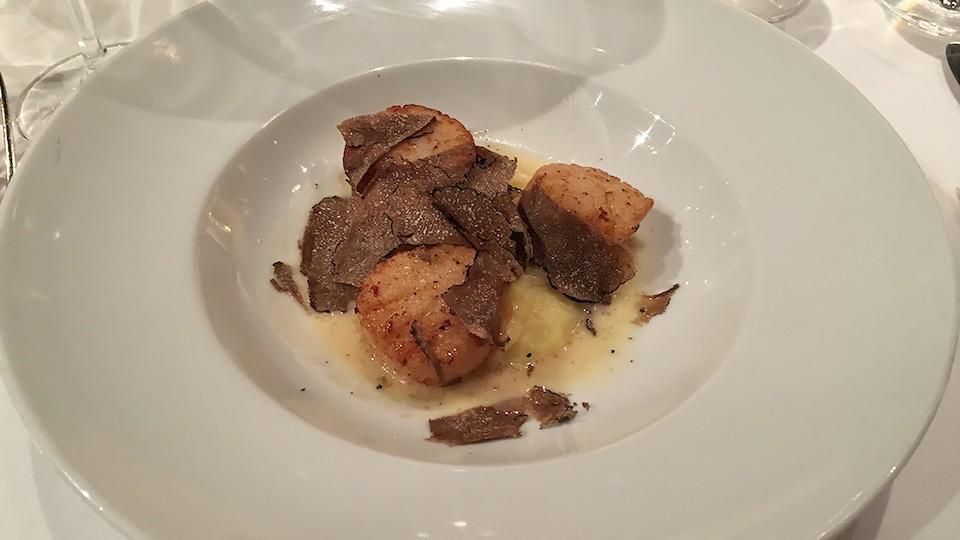 The evening gets off to a fabulous start with four gorgeous wines. The Substance (05/16) is powerful and sumptuous in the glass, with tons of apricot jam and exotic spice notes. Rich, ample and texturally resonant, this release shows the more lush side of Substance. A crystalline, bright expression of Chardonnay emerges from the Substance (10/15). Here the flavors tend towards the brighter end of the spectrum, with hints of hazelnut and lemon oil that add nuance throughout. This stellar Substance that shows far better than it has previously. Dried flowers, savory herbs and almonds, along with a decidedly mid-weight expression of structure, give the Substance (10/14) much of its distinctive personality. In this release, Substance is linear and brilliant in style. In this setting, the Substance (09/13) comes across as a bit monolithic. There is no shortage of depth or density, but here the wine feels a bit heavy and bombastic, especially next to the other wines in the flight. 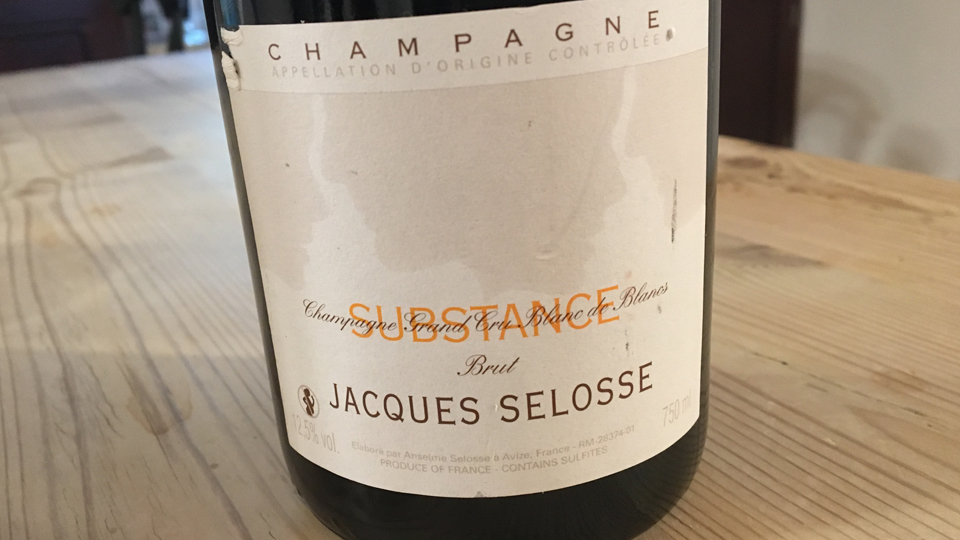 The Substance (10/11) is exotic and unctuous in the glass. Honey, chamomile, dried herbs and dried apricots are laced throughout. Seamless and sumptuous on the palate while preserving tons of detail, this release is simply phenomenal. One of the few disappointments of the evening, the Substance (10/10) is dominated by a host of oxidative, mushroomy notes that are not especially inviting. I have had far better bottles of this wine. Selosse’s Substance (09/09) rounds this flight out in style. Rose petal, mint, candied orange peel, dried flowers and spice give this release a decidedly exotic, Pinot-leaning feel to match its layered, sumptuous personality. 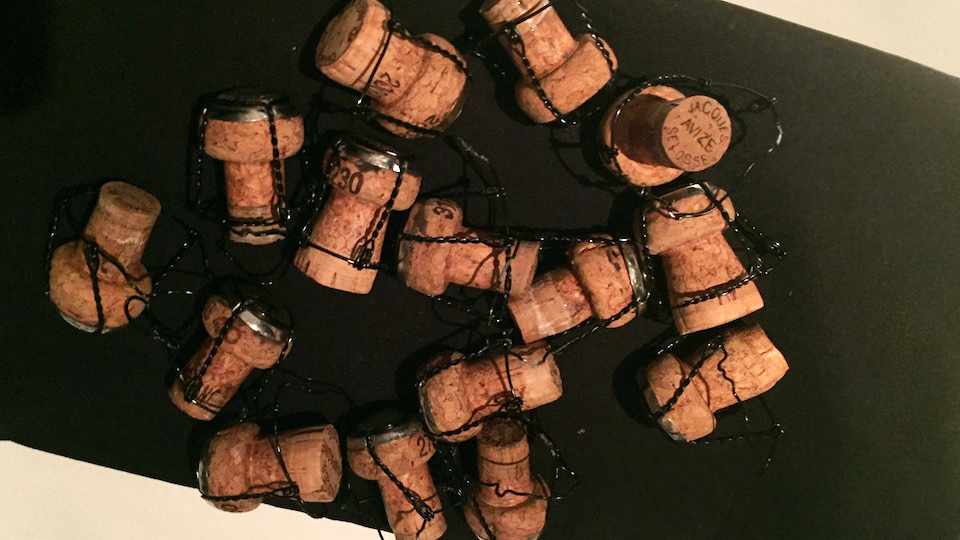 A decidedly dense, virile Substance from the December 2008 disgorgement kick off this flight. Apricot, hazelnut and honey are some the notes that develop in the glass. This is one of the more burnished, oxidative wines in the tasting. Although heading into a more mature phase, this release also retains good energy. I would prefer to drink it sooner rather than later. Fresh, nuanced and expressive, the Substance (04/07) is wonderfully fresh and alive, with plenty of citrus oil, tangerine, hazelnut and herb. The balance of energy and fleshiness here is compelling. Sadly, the Substance (03/06) is flawed. Another brilliant wine, the Substance (06/05) is a stunner. Vibrant and powerful, with tons of focus, Substance absolutely sizzles in this release. Time in the glass brings out a more polished, translucent side of Substance, an impression that is reinforced by the wine’s silky feel. 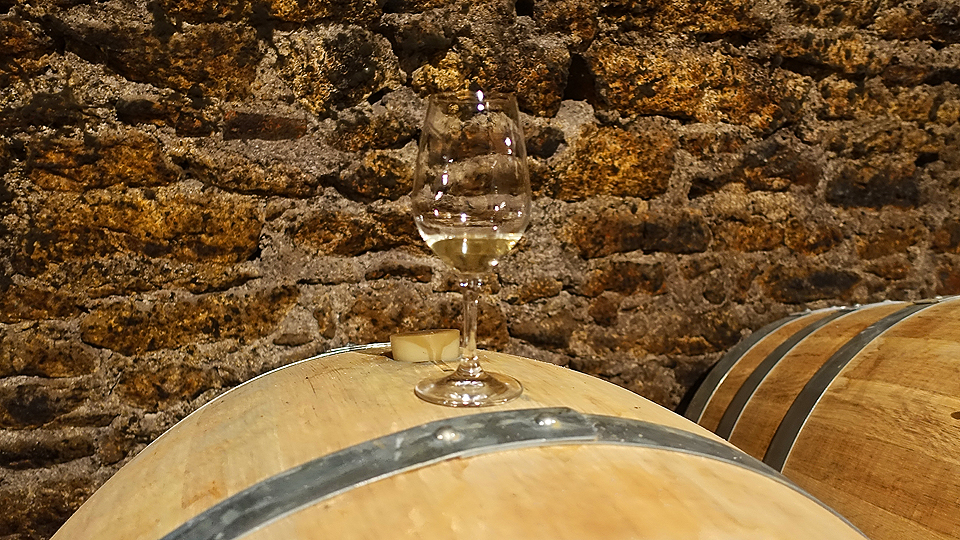 Tasting a component wine of Substance

Precise, tense and beautifully sculpted, the Substance (07/02) is terrific. Even with more than a dozen years on the cork, this release remains wonderfully alive. Lemon oil, almond and dried flowers add complexity, but it is the wine’s vibrancy that stands out most. The Substance (11/01) is endowed with serious depth and intensity. Citrus, floral and saline notes abound in this finely sketched, articulate Substance. This is one of the highlights of the evening. What a treat it is to taste Selosse’s Origine (10/99). Soft and pretty much resolved, the 1999 disgorgement is a terrific example of a fully mature Substance that will still hold for some time. Truffle, lemon oil and white flowers give the wine much of its distinctive personality. Alluring and impossible to resist, Origine is absolutely irresistible in this edition.

See All the Wines Tasted