Champagne fans have plenty to look forward to, as the fall season brings with it a number of fabulous new releases and plenty of occasions to enjoy them.

With Vinous now in full swing, this year we were able to something we had always wanted to do which is offer year-round coverage of Champagne. Although there are plenty of new and upcoming releases in this article, I encourage readers to check our Spring Preview, Champagne: New Releases and Collectibles, which covers a number of the finest wines from the region. We have also made it easy to search the database of all wines reviewed in 2014:

See All Champagnes Reviewed in 2014

Last May, I wrote about some of the issues surrounding NV Champagnes based on the 2011 vintage. At the time, I hoped the green, vegetal notes afflicting some wines might lessen over time. Instead, the exact opposite has happened. Those notes have only become more accentuated since the spring. While preparing this article I ran across countless wines with harsh, vegetal notes. Like Burgundy, Champagne suffered from a challenging growing season in 2011. In tasting through the NV Champagnes based on 2011, I found the same strident, vegetal flavors that are also characteristic of the 2011s and 2004s in Burgundy, specifically excessively green notes that are often attributed to high ladybug populations. Perhaps because of the higher yields used to make Champagne the vegetal characteristics are more evident than they are in the still wines of Burgundy because there is less fruit concentration to mask any rough edges. I urge readers to be especially selective when it comes to the current crop of NV Champagnes. 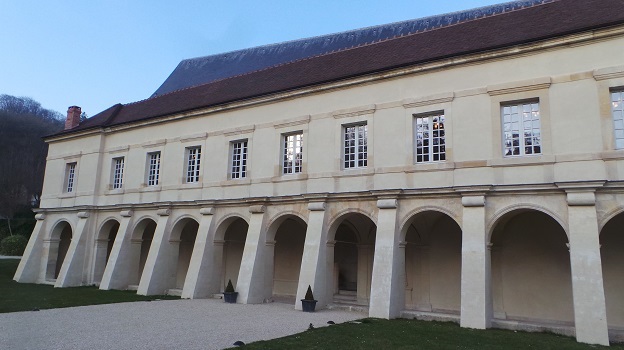 The modern-day Hautvillers Abbey, where Dom Pérignon spent most of his life

I want you to know you are buying the same wines I taste, review and recommend. That is pretty easy to do with vintage Champagnes, but next to impossible to do with NV Champagnes unless the wines are clearly labeled and differentiated from release to release. Without some type of clear identifier there is no way for consumers to know if the wine they are buying is the same wine I tasted, a ridiculous state of affairs that exists with no other wine.

Ideally, a NV Champagne back label would indicate the base vintage (an even greater indication of the qualities of a given wine) plus the disgorgement date, both of which are helpful to consumers. Let me be clear. Newer disgorgements aren’t better or more desirable than older disgorgements, they are just different. There are times when older disgorgements are preferable, as the wines have had more time on the cork to recover post-bottling and to develop nuance.

As has been my policy for several years, I only review non-vintage wines with a disgorgement date or some other easily visible, consumer-friendly labeling, such as the ID codes producers have begun to introduce recently. I am happy to report that the number of wineries that now include information on disgorgement dates, base vintages and/or other information on their NV Champagnes is growing, which is great for the consumer.

All of the wines in this article were tasted in Fall 2014. A number of houses did not have new releases in the market since our last article, but where possible, I went back and tasted wines again for reference.

Champagne: New Releases and Collectibles (May 2014)