When I was a child my father gave his best customers bottles of Dom Pérignon as a holiday gift. From an early age, to me Dom Pérignon was virtually synonymous with fine Champagne. I imagine many people feel the same way, as Moët et Chandon has done a remarkable job in building Dom Pérignon’s prestige around the globe. While some of the large production Champagnes often give emphasis to style over substance, there can be no denying that at its best Dom Pérignon is more than just a brand. There is something quite magical about Dom Pérignon, especially in strong vintages. This recent tasting with Chef de Caves Richard Geoffroy and Winemaker Vincent Chaperone provided a great opportunity to check in on handful of new and past releases. It was quite fitting that on this cold day we tasted in the abbey at Hautvillers, where the Benedictine monk and cellarmaster, Dom Pérignon, advanced a number of viticultural and oenological techniques that were incredibly forward-thinking for his era, some 300 years ago. 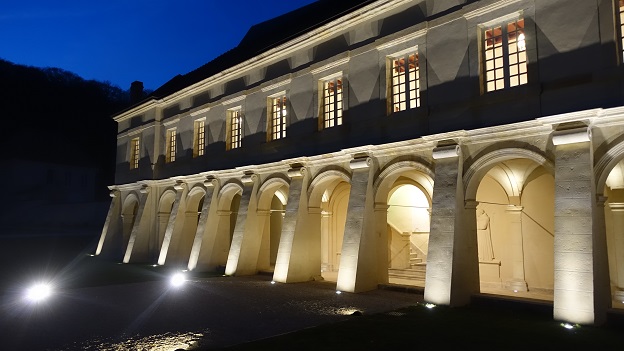 One of the things that is most remarkable about Richard Geoffroy is his artistic, introspective personality. While so many winemakers in Champagne consistently rave about how great their wines are, Geoffroy is not afraid to talk about mistakes and lessons learned along the way, something that makes him rather rare among his colleagues. Geoffroy describes Dom Pérignon as a wine of paradoxes. “Dom Pérignon is perceived as quite traditional and classic in the minds of consumers,” says Geoffroy “but the reality is quite different. As opposed to the traditional, oxidative style some houses pursue, Dom Pérignon is made in a more modern, reductive style aimed at maintaining acidity and freshness.” Although Geoffroy uses only natural yeasts for Dom Pérignon, he says the real secret is in the blending of vineyards and grape varieties, much of which remains top-secret, as do production numbers.

Geoffroy describes his winemaking as striving to bring out what he calls “grey” tones that remain an element of freshness rather than the more oxidized, honeyed aromas and flavors, which he classifies as “brown.” He talks about the Pinot elements requiring time to emerge, while the Chardonnay components are rather evident from the outset. Over the years, Geoffroy has also moved to lower dosage levels for his wines. For example, the 2000 Dom Pérignon saw just 6 grams of dosage, which is decidedly towards the lower end of the spectrum for the large production Champagnes.

These four vintages of Dom Pérignon provide a fascinating snapshot of how the house has performed in recent years. The 2000 Dom Pérignon is a gorgeous, seductive wine that floats on the palate with remarkable grace. Toasty aromas meld into freshly cut flowers, apricots and pears, with sweet notes of mint and licorice that linger on the long finish. This perfumed, inviting Dom Pérignon is elegance personified, and in this vintage the wine fully merits its lofty reputation. According to winemaker Vincent Chaperone there is only one disgorgement date for the first release of Dom Pérignon, and the 2000 was disgorged over a period of weeks in March and April, 2007. Anticipated maturity: 2009-2019. The 1999 Dom Pérignon is a little flabbier than the 2000. Smoke, toastiness, tar and ripe fruit emerge from the glass in a generous, expansive style. The 1999 offers more body than the 2000 but the aromas and flavors are less well-articulated. This is a relatively simple Dom Pérignon, yet the wine possesses outstanding balance and plenty of harmony.  According to Chef de Caves Richard Geoffroy the warm vintage also resulted in relatively high yields, and the low-acid style is most reminiscent of the 1976. Anticipated maturity: 2009-2024. The 1998 Dom Pérignon comes across as somewhat two–dimensional and lacking the sheer cut of the 2000. There is plenty of ripeness in the fruit, but not quite the definition and verve of the finest vintages. This looks to be a relatively early-drinking Dom Pérignon. Geoffroy adds that the estate may have waited a bit too long to pick certain parcels in 1998. Anticipated maturity: 2009-2019. The 1996 Dom Pérignon is superb. Layers of roasted nuts, spices, tar, smoke, acacia blossoms and a light touch of honey emerge from the glass, adding complexity to the fruit. This large-scaled Dom Pérignon is currently in a beautiful place where early tertiary notes have begun to appear, yet the wine retains plenty of freshness. This is a terrific Dom Pérignon that can be enjoyed today but that also promises much pleasure for the future. Anticipated maturity: 2009-2029.

I am a big fan of Dom Pérignon’s Rosé, so it is interesting to taste the two most recent vintages side by side. While is tempting to think of the Rosé as a sibling of the regular Dom Pérignon, the base of white grapes is different for the Rosé and it is without question it a wine with its own personality. The 1998 Dom Pérignon Rosé is a striking, intensely perfumed Champagne redolent of sweet candied cherries and spices. This medium-bodied wine possesses gorgeous structure, but ideally another year or two of cellaring is warranted in order for the full range of aromas and flavors to emerge. The Dom Pérignon Rosé is 80% Chardonnay and 20% Pinot Noir, with most of the Pinot coming from the south-facing vineyards of Aÿ. Anticipated maturity: 2010-2020. The 1996 Dom Pérignon Rosé has lost some of its freshness and also developed a more candied profile since I last tasted it about six months ago. Geoffroy describes 1996 as a challenging vintage, especially for the Pinot, which suffered somewhat from the heat and has sometimes shown blowsy characteristics. The 1996 remains a generous, layered version of this wine. The best bottles are drinking beautifully today and have the structure to continue to drink well for at least another decade. In general though, my preference has been to drink Dom Pérignon Rosé relatively early (within 15 years or so of the vintage) as my experiences with older wines has been decidedly mixed. Anticipated maturity: 2009-2019. 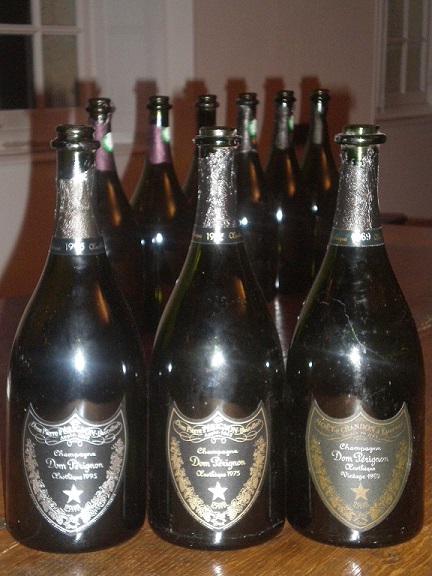 In recent years Geoffroy has instituted a program of releasing recently-disgorged older vintages under the Œenothèque label. Some of the vintages from the 1990s are in their second release (also known as second plenitude), while the older, classic wines from the 1960s and 1970s are being released for a third time (also known as third plenitude), but in miniscule quantities. As part of the disgorging process, each bottle is tasted to insure consistency, something that is especially important with wines that have spent several decades on the cork. Dosage is kept low to minimal, particularly for the older wines. While the Œenothèques, especially the third releases, can be very pricey, at their finest they offer an extraordinary, otherworldly drinking experience matched by few wines in the world.

The 1995 Dom Pérignon Œenothèque is the second release of this wine, and was disgorged in 2005. This silky-textured Champagne reveals breathtaking finesse, elegance and clarity in its perfumed bouquet, with delicate notes of pears and roasted nuts that add further complexity. The finish goes on and on. This mind-bending, kaleidoscopic Champagne possesses all of the qualities of profoundness, most importantly the ability to develop beautifully in the glass and the potential to acquire even more depth in bottle over the coming years. 1995 was a hot vintage, but this wine remains remarkably fresh. Simply put, the 1995 Œenothèque is a stunner. Anticipated maturity: 2009-2029.

I have been privileged to drink the 1975 Dom Pérignon Œenothèque (3rd release) on several occasions and it has never been anything less than breathtaking, as it is again today. This surreal, beautiful Champagne reveals striking purity and clarity in its suggestions of honey, roasted nuts and sweet fruit in a style that recalls a mature grand cru Burgundy at its finest. The aromas and flavors are at once mature yet fresh, very much on the “grey” side of the spectrum Chef de Caves Richard Geoffroy likes to talk about.  Simply put, readers who can find and afford this sensual wine should not hesitate. It is a masterpiece. This bottle was disgorged in 2007 with minimal dosage. Anticipated maturity: 2009-2019. The 1969 Dom Pérignon Œenothèque (3rd release) provides a fascinating contrast to the 1975. The flavors are very much “brown”, which is to say on the oxidative side. Honey, spices, candied orange peel and dried apricots are just some of the nuances that emerge from this generous, ample Champagne. Here too, the balance is impeccable, although the style is very different. I had previously believed that 1969 was the last vintage of Dom Pérignon to be fermented in oak, but according to Geoffroy the move to stainless steel had already taken place in the mid-1960s. Readers who want to experience a fully mature Œenothèque should consider the 1969. It is splendid. This bottle was disgorged in 2006, with minimal dosage of a just a few grams. Anticipated maturity: 2009-2014.