Dom Pérignon: No Guts, No Glory

I was blown away by these four new releases from Dom Pérignon. I confess I have long admired the flagship Dom Pérignon Blanc. There is a timeless elegance about Dom Pérignon that I find comforting and reassuring, like a favorite restaurant or food.  For that reason, nothing could have prepared me for the Champagnes I tasted recently with Chef de Caves Richard Geoffroy. While the 2002 Dom Pérignon and 1996 Dom Pérignon Œenothèque are both for the most part representative of what readers have come to expect from this house, the 2000 Dom Pérignon Rosé and 1990 Dom Pérignon Rosé Œenothèque are wines that push the envelope and push it hard. I can’t think of another winemaker at a Grande Marque who is willing to take these kinds of risks by turning well-established conventions on their head. Much of what I tasted reminded me of the experimental, searching spirit that defines so many of the smaller-production, artisan Champagnes being made today. As the saying goes ‘no guts no glory’ and there is plenty of both here. These wines are nothing short of magnificent.

The 2002 Dom Pérignon is at first intensely floral, with perfumed jasmine that dominates the bouquet. With time in the glass the wine gains richness as the flavors turn decidedly riper and almost tropical. Ripe apricots, passion fruit and peaches emerge from this flashy, opulent Dom Pérignon. The wine’s volume makes it approachable today, but readers in search of more complexity will want to cellar this for at least a few years to allow for some of the baby fat to drop off. Geoffroy describes the vintage as very ripe and adds that some of the Chardonnay showed the ill-effects of the hot growing season in it the somewhat burned, dehydrated fruit that came in that year. This bottle was disgorged in July, 2009. To be released summer 2010. 96/Anticipated maturity: 2012-2032.

The 1996 Dom Pérignon Œenothèque offers up layers of pastry, lemon, smoke and toastiness. At first deceptively understated, the wine turns positively explosive and layered on the palate, showing remarkable tension, elegance and power, all wrapped around a seriously intense frame. The balance between fruit and acidity is awesome. This is a marvelous DP Œeno. The Œeno is the same juice as the regular Dom Pérignon, except the Œeno is aged on the cork while the regular DP is aged in crown-sealed bottles. Once disgorged, the Œenos get a slightly lower dosage than is typical for the original release DP. This bottle was disgorged in 2008. To be released fall 2010. 97/Anticipated maturity: 2012-2026. 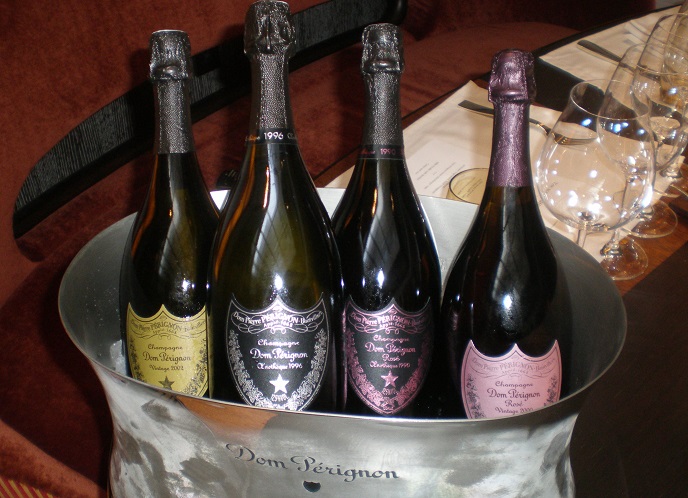 The 2000 Dom Pérignon Rosé is a flashy, ripe Champagne that screams Pinot to a degree I have never encountered in another vintage of this wine. A dark, intense color leads to a Chambolle-like nose followed by endless red berries, flowers and spices, all backed up with plenty of muscle, richness and density. The wine continues to blossom on the palate, with utterly beguiling detail, clarity and polish, all qualities that resonate on the rich, expansive finish. The 2000 Dom Pérignon Rosé is 45% Chardonnay and 55% Pinot Noir, of which 25% is still Pinot. Geoffroy says his goal was to make a statement with the 2000 Dom Pérignon Rosé; he has done that…and so much more. In fact, the 2000 seems to signal a stylistic shift towards a more important, serious style of rosé. This superb wine is not to be missed, but readers should note this is no easygoing rosé, rather it is a Champagne that demands serious attention. The 2000 will test the limits of what readers expect from a Dom Pérignon Rosé, but the wine is simply marvelous. I loved it. This bottle was disgorged in 2008. 96/Anticipated maturity: 2010-2025.

The 1990 is the first Dom Pérignon Rosé to be released as part of the Œenothèque program and is also the year Richard Geoffroy was appointed to his post as Chef de Caves. This is a hypnotic, mesmerizing wine that is unlike any Champagne I have ever tasted. A burnished, deep orange, the wine emerges from the glass with delicate layers of truffles, mushrooms, tea and autumn leaves that recall a great, mature Grand Cru red Burgundy. Candied orange peel, dried roses, spices, apricot jam and white pepper are some of the notes that develop with air. Despite its vivid, textured personality the wine hovers on the palate in a weightless, ethereal style. Geoffroy served the 1990 Rosé Œenothèque in the new Riedel Burgundy glass, which worked beautifully, although this drinking experience may not be for everybody. With air, the 1990 Rosé Œenothèque naturally loses much of its effervescence and turns more wine-like. Though undeniably beautiful, this is a highly quirky wine that should only be purchased by readers familiar with aged rosé Champagne or those with an open mind, because it will challenge many preconceptions of what Champagne is and can be. At an estimated $900 a bottle, it won’t come cheaply, either. That said, it is marvelous and totally compelling. The 1990 Rosé Œenothèque is 50% Chardonnay, 50% Pinot Noir, of which 20% is still Pinot. Geoffroy has plans to release a number of older rosés, including the very rare 1966 sometime next year. The 1990 Rosé Œenothèque is already rather forward, and I am not sure how it will age from here. I also have a personal preference for drinking rosés a touch on the younger side, which readers should take into consideration when looking at my drinking window. Like all DP Œnos, the 1990 Rosé Œenothèque spent quite a bit longer on the lees and received lower dosage than the original release. This bottle was disgorged in 2007. 97/Anticipated maturity: 2010-2015.