I tasted a wide range of wines during two highly educational visits to Champagne this year. Our Summer Preview includes everything from reviews of new releases coming into the market, from both grower domaines and grand marques, as well as notes on a handful of collectibles. The pace of change on the ground is dizzying, which makes Champagne one of the most dynamic regions in the world today. 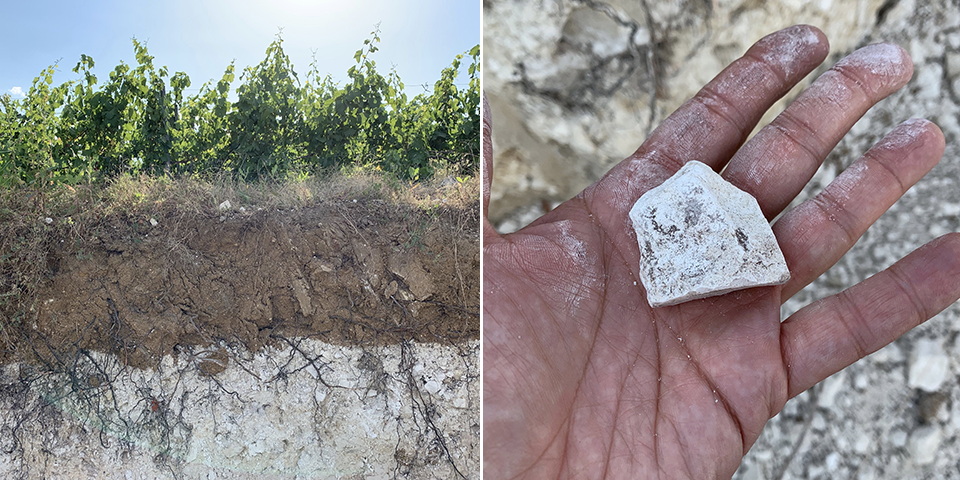 The essence of Champagne terroir. Left: Vines planted on 60-80 centimeters of clay topsoil over a bed of pure chalk. Right: Chalk remains cool and moist to the touch, even after a severe heat wave.

As I have written here before many times, Champagne is far more than a celebration or special occasion wine. All it takes is one look at the best restaurant wine lists to understand the mind share Champagne continues to garner. But what makes Champagne so unique? To, me, it ultimately comes down to terroir, that most defining but also elusive concept that is so central to the understanding of site-specific wines, starting with Burgundy, of course. While terroir is often interpreted as characteristics purely of soil, a more practical definition also includes microclimate, altitude, exposure and the whole range of site-specific traits that give wines their distinctive personalities. The two photos above explain what makes Champagne so special. They were taken in early July 2019, just after a brutal heat spike. On the left we see a vineyard in Cramant sitting on 60-80 centimeters of clay topsoil over a bed of pure chalk. The natural struggle the vines must endure to find nutrients through the clay and into the chalk is clearly visible. When I picked up a piece of chalk (pictured on the right), it was cool to the touch and moist. And that was after the heat wave. This, in a nutshell, is Champagne. Of course, there are many more layers of the onion to peel as we seek to better understand how place influences what we taste, but this is the starting point. 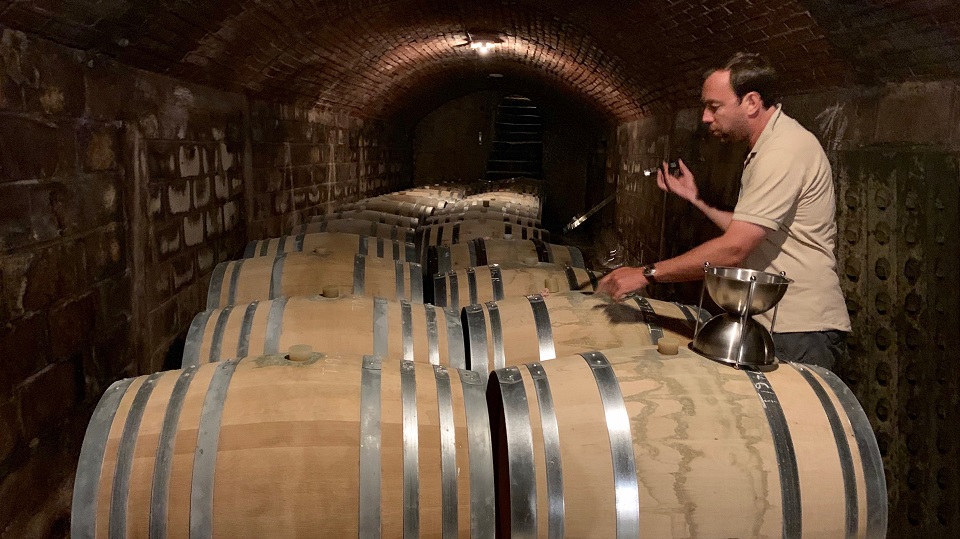 A moment of calm in the cave as Olivier Collin shows me his 2018s from barrel.

As I have done now for over a decade, I spent quite a bit of time tasting vins clairs at a number of properties this past spring and summer. The early expectation for 2018 was for a great year. Some of that was likely a response to 2017, which was very complicated. When all was said and done, 2018 turned out to be an early-ripening vintage (harvest began in late August), with elevated levels of maturity, historically high yields and very clean fruit. Based on what I sampled, 2018 looks better and more consistent for Pinot more than Chardonnay, but quality is inconsistent from house to house. I tasted everything from diluted, washed out vins clairs with little character to wines that were thrilling to taste for their potential.

There is little doubt Chefs de Caves, especially at larger houses, welcomed the abundant crop and stress-free harvest. Regulations allowed for a maximum production of 10,800 kilos per hectare in 2018, plus another 5,000 kilos per hectare that could be designated for reserves. The reality is that, anecdotally, many vineyards yielded far more than 16,000 kilos per hectare. On top of that, local reports suggested that some vineyards were not picked at all because the crop was so abundant. Because of the very high yields Chefs de Caves likely have enough wine to both max out their 2018 reserves and also take advantage of regulations that give them the opportunity to get rid of their 2017 reserves (uneven wines from a very tough year in which yields were decimated and many wines are marked by off flavors) by selling them off to the distillery, and then replacing those 2017 reserves with 2018s. 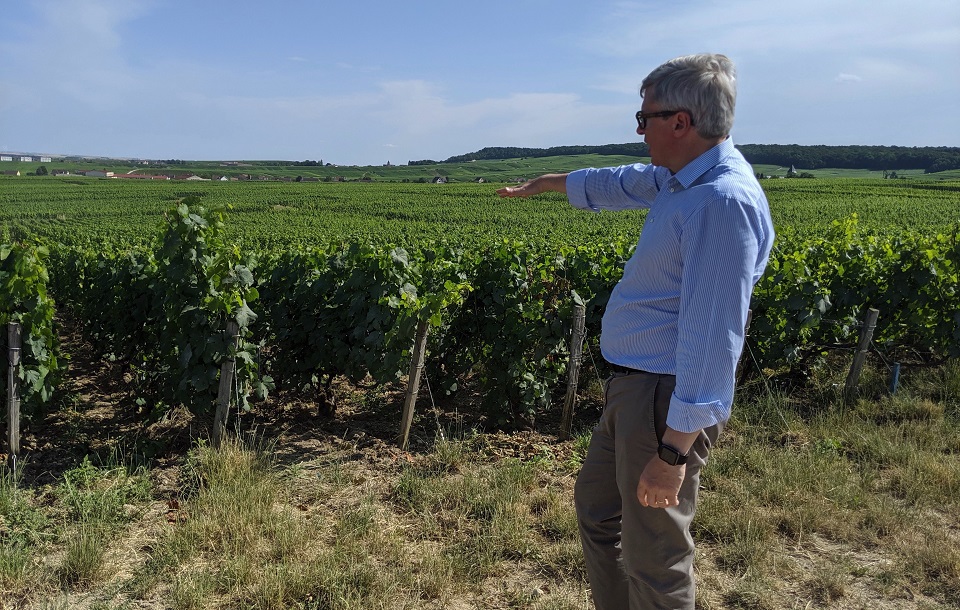 Jean-Baptiste Lécaillon at Roederer is among the most enthusiastic Chefs de Caves when it comes to 2018.

“If you aren’t happy in 2018, when are you going to be happy?” Roederer’s Chef de Caves Jean-Baptiste Lécaillon told me bluntly. “To be sure, you had to have low yields, and in that regard we are helped because we farm so many of our vineyards biodynamically, and therefore yields are naturally moderate. You also had to be patient, especially with the Chardonnay, and wait for full ripeness. In the cellar, blocking the malolactic fermentation was essential in order to preserve as much freshness as possible. If you did those things, there is no question 2018 is a great vintage. These are some of the best wines I have ever made. On paper, 2018 looks a lot like 1959, but it is a ‘false low-acid’ vintage, because the wines have freshness as well.”

Rodolphe Péters echoed some of those themes. “It is a very ripe vintage, with low acids but also low-ish pH,” Péters told me. “In 2018, we reached phenolic maturity at slightly lower sugars than 2017, but the balance of the wines is similar. For the first time ever, I blocked the malolactic fermentations on 50% of my wines to try to retain as much freshness as I could.” 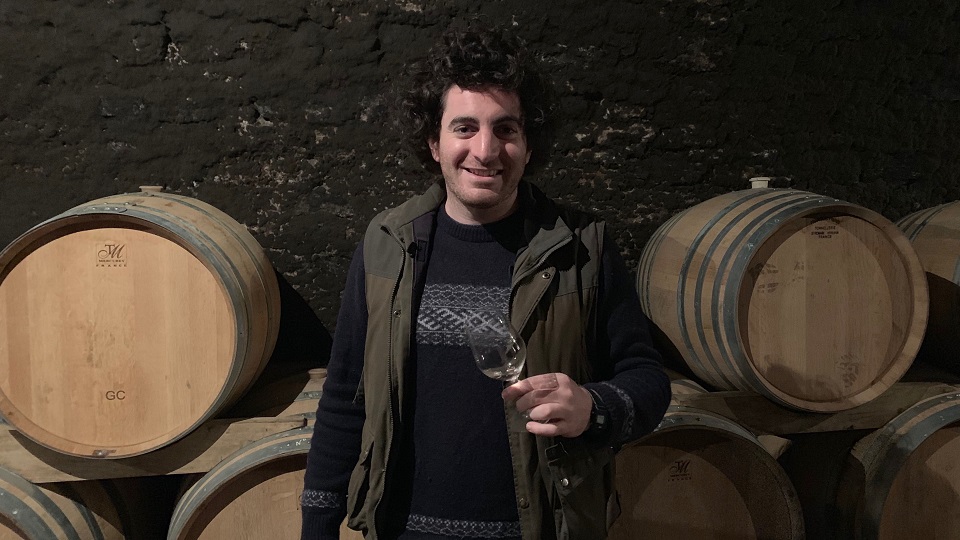 Guillaume Selosse in his cellar after tasting through the 2018s.

“It’s good, but it is not very concentrated or deep,” Guillaume Selosse explained. “Ripening just stopped in some parcels, and even though we waited, ripeness did not always move in a meaningful way.” Based on the vins clairs I tasted at Selosse, at this stage 2018 looks better for Pinot Noir than it does for Chardonnay. Yields were also lower for the Pinot, so that may explain why those wines show more depth today.

I tasted a number of exceptional, vibrant Chardonnays of real character and pedigree at Vilmart. “I started very early to try to save the pH and acid levels,” Laurent Champs recounted. “Most of our fruit came in at 10.8-11%, but pHs are around 2.95, which is low and very good for the year,” he added. “Initially we thought 2018 was going to be a great vintage, instead we are going to have to settle for something less than that,” Jean-Hervé Chiquet told me at Jacquesson. “For us, 2018 is better for Pinot Noir than Chardonnay. We plan to bottle our lieu-dit Pinot, but not the Chardonnays.” 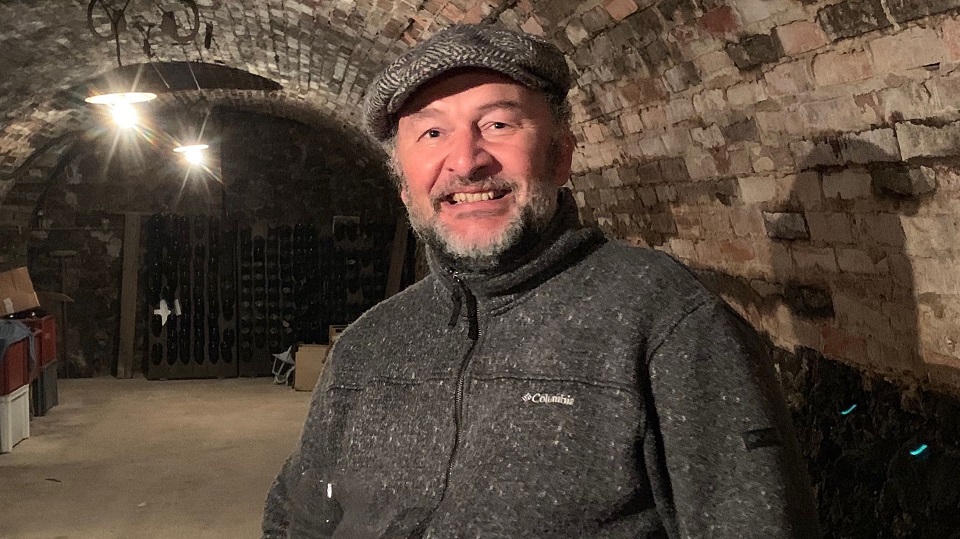 Vincent Laval bottled his 2018s on the early side.

For the first time I can remember, Vincent Laval had all of his 2018s in bottle when I stopped by in mid-March. “The wines were beautiful and round, so why wait?” he told me. “It was a big crop with beautiful grapes. Harvest started on August 28, with good sugars. The Chênes came in at 11.5%, while the Chèvres was 11.8%.”

“Usually, there are some unexpected weather events, but in 2018 everyone was happy because conditions were so favorable and production was abundant.” Krug’s Chef de Caves Eric Lebel told me. "In tasting the wines, though, we noted that they are less consistent than we initially thought. PHs are higher than normal, while acidities are on the lower side.” 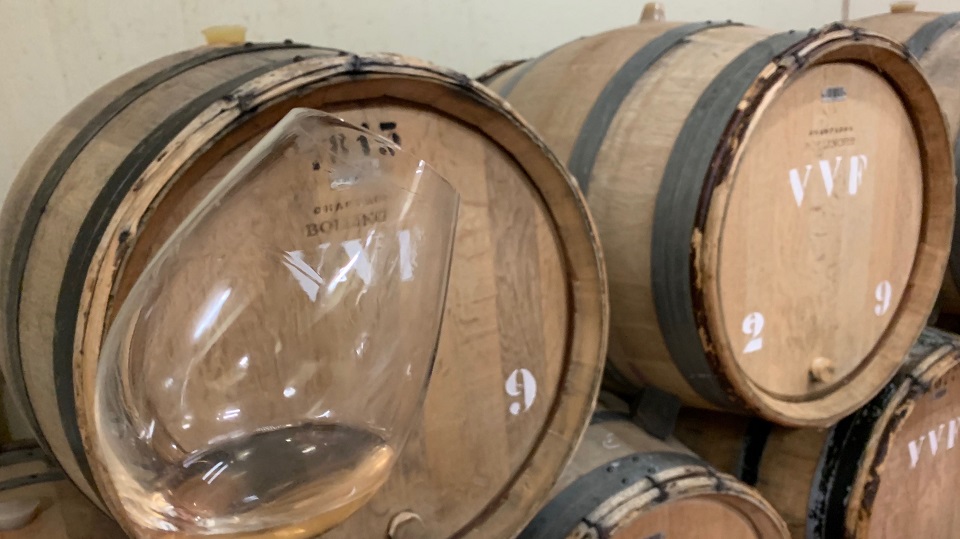 Tasting the 2018 Vieilles Vignes Françaises from barrel at Bollinger.

Coteaux Champenois on the Rise 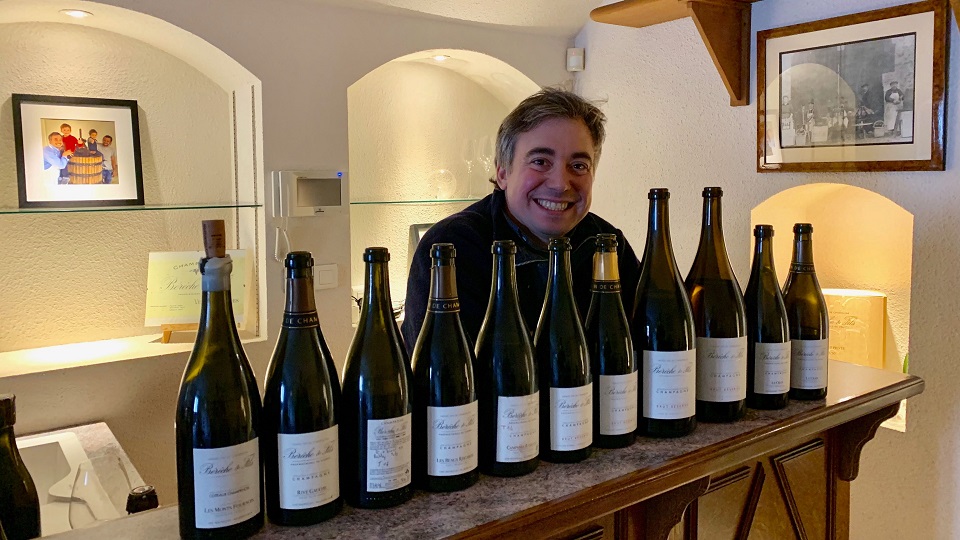 I tasted all of the wines in this article during two visits to Champagne in March and July 2019, and in New York in the months in between those trips.