The 2013 vintage was extremely challenging throughout France, but most of Champagne was spared the worst. In the Côte des Blancs in particular the best Chardonnays are drop-dead gorgeous.

I recently spent a week in Champagne tasting through the young vins clairs, something I have done for a number of years. I visited a number of estates, both small and large. Champagne is fascinating for so many reasons, among them the parallel existence of two very different and complementary cultures. The big, luxurious houses aren’t too dissimilar from what one often sees in Bordeaux, while the typical grower’s cellar could be easily mistaken for something right out of Burgundy. Large houses offer the best global perspective on vintages because they make wines from a large number of villages across the region. Tasting at smaller growers, on the other hand, often provides greater insights as to the performance of a single village and/or grape. My initial thoughts are based on tastings of 2013s at Bereche, Ulysse Collin, Henri Giraud, Jacquesson, Georges Laval, Moët et Chandon, Philipponnat, Pierre Péters, Jerôme Prévost, Roederer, Ruinart, Savart, Camille Saves, Taittinger and Tarlant. A few houses I visited rarely show vins clairs (Dom Pérignon comes to mind), but I tasted plenty of compelling wines I will be sharing with readers shortly. Below are some of the many highlights of the week I spent tasting the 2013 vins clairs. Reviews of new releases will follow in about two weeks’ time.

In 2013, the most critical part of the year was the flowering, which took place later than normal under cool, damp conditions. Vineyards that flowered during the worst weather were severely affected by coulure and millerandage, while plots that flowered outside of that band set a normal crop. Paradoxically, vineyards with no issues during flowering had a very hard time ripening their crop because the rest of the season was cool and very long. On the other hand, vineyards where yields were naturally lowered by the poor flowering had a chance to ripen. In most parts of the region the summer was uneventful, as Champagne emerged largely unscathed from the violent storms that devastated so many vineyards in the Loire, Burgundy, Bordeaux and other regions in France. The Aube, which is actually closer to Chablis, is the exception, as the weather was especially challenging in this district. The harvest took place in late September and early October, virtually unheard of by today’s standards. Vineyards that struggled to ripen became susceptible to outbreaks of rot as the season progressed into the fall. 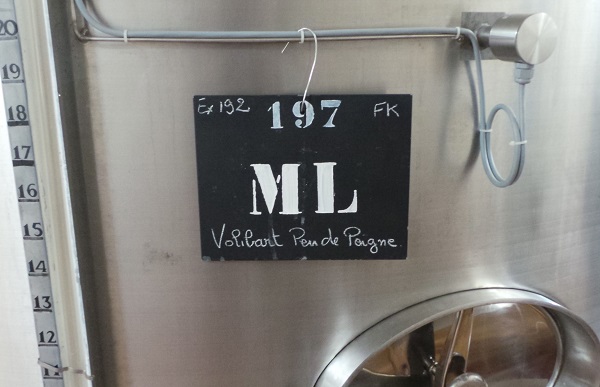 Roederer: Chardonnay from the Volibart lieu-dit in Le Mesnil-sur-Oger

As a result of the challenging and varied conditions, quality is not surprisingly inconsistent across the board, although there are plenty of highs. The best wines, those from sites with low yields, show tremendous concentration, depth and power allied to bright acidities and low pHs. I am particularly impressed with the Chardonnays from the Côtes des Blancs. I also tasted a number of excellent Chardonnays and Pinots from the Grande Vallée (the heart of the Marne Valley) and select houses in the Montagne de Reims. Most of the Chefs de Caves I spoke with plan on declaring the vintage, although a few cautioned that production would be down sharply.

Laurent Champs of Vilmart reported picking Chardonnays at 11.5%, which is quite high. At the same time, acidity readings are high, while pHs were low. Moët et Chandon winemaker Benoit Gouez told me average sugars were in the 9.6%-9.8% range. According to Gouez the vintage is strong for Chardonnay and selectively good for Pinot in places like Aÿ, where the fruit came in at 10.5%. The south-facing vineyards of Aÿ seem to have performed well at a number of addresses, as the relatively warm micro-climate accelerated ripening and staved off disease. Krug’s Chef de Caves Eric Lebel told me he brought in most of the fruit at 10.5%-10.6%, but was mostly concerned with keeping acidities above 8% and pHs in the 2.7-2.8% range. According to Rodolphe Péters, conditions improved markedly after the difficult flowering and throughout the summer, but low yields were the key to quality.

I have said it before, and it is still true: there is no better place to get a handle on a new vintage than at Roederer. Chef de Caves Jean-Baptiste Lecaillon puts on the best vin clair tasting. Usually the samples are prepared in advance, but this year we moved tank to tank, sampling several dozen wines along the way. As is typically the case, the wines are incredibly site specific. Even at this early stage, it is pretty obvious which wines have the potential to be special and which do not. The overall level of quality is well above average, with a few points of true brilliance. Purchased fruit is now only used for the NV Brut Premier. Everything else is 100% estate. The Chardonnays are all above 11%, while the Pinots hover in the 10.5-11.8% range, which is quite high by today’s standards in Champagne. According to Lecaillon, all of the great pre-1970’s vintages (before yields in Champagne began to go up) were ripe years.

Krug: Behind the Scenes

Although I have been tasting vins clairs at Krug since the 2008 vintage, I have never participated in a formal session with the entire team. Today's tasting is being held in the Krug offices, where the setting is much more functional and decidedly less glamorous than in the public rooms. Chef de Caves Eric Lebel runs the show. The entire Krug team is present, starting with CEO Margareth Henriquez, Olivier Krug, Clos du Mesnil winemaker Julie Cavil and several members of the vineyard and winemaking teams. A dozen or so bottles are passed around one by one. Each person comments on the specific wine being looked at, and assigns a numerical score. Cavil is the most demanding taster, while Krug and Henriquez are a bit more forgiving. The discussion reveals which attributes each taster finds most important. Lebel listens attentively to the comments and takes assiduous notes. It is interesting to watch the interplay of opinions. Of course, it is virtually impossible for an outsider to judge vins clairs. Most will become part of future Grande Cuvées. Blending these components, often in excess of 100 wines, is an art of understanding the degree to which single wines complement each other. Needless to say, this front-row seat provides fascinating insights to the way wines are made at Krug. 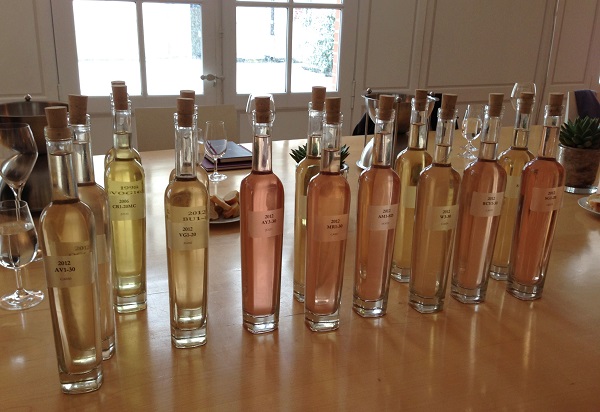 Selosse: One of a Kind

Tasting vins clairs from barrel with Anselme Selosse feels just like being in Burgundy. Low yields in the vineyards give the wines much more texture and depth than is typical in Champagne. We start with the Pinots, then move our way into the Chardonnays, all straight from barrel. The wines are utterly breathtaking in their beauty and transparency. Even with all of their richness, the wines are so eloquent in the way they express their origins. In a word: stunning. Now that all of the Champagnes except for the Vintage are made in a solera-inspired style, it is absolutely thrilling to taste the wines at this stage, when they are untouched and brilliantly pure. What a tasting. 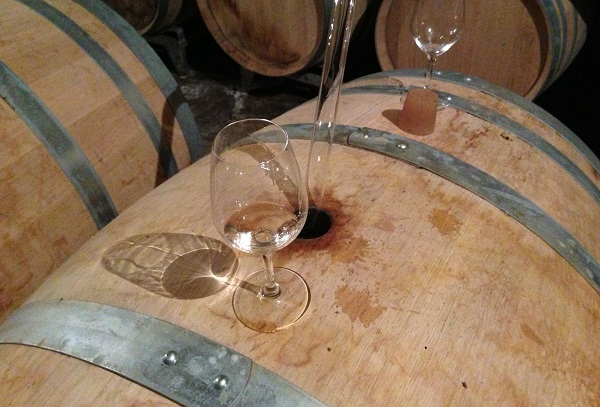 Tasting the 2013s from barrel at Selosse, Avize

The 2013s at Pierre Péters are strikingly beautiful. I tasted a handful of finished blends for the entry-level Champagnes, plus the Chetillons in two separate lots and a composed blend of that wine. Today, the 2013 Chetillons comes across as a synthesis of 2002 and 2004. Needless to say, that is a pretty exciting combination. There is also a new wine from the Montjolys lieu-dit in Mesnil. We finish with the L’étonnant Mr. Victor, a blend composed of the best tank of the year from Chetillons and the best tank of the house’s perpetual reserve, usually 50/50. First produced in 2009 but not yet commercially released, the Victor (named after Rodolphe Péters’s son) is aged on cork, a practice that seems to be coming back into fashion at a number of grower estates, including Bereche and Agrapart. The 2013 boasts impressive depth, not to mention tons of promise for the future. It is a great way to round out this survey of 2013s at one of the top cellars in Champagne. 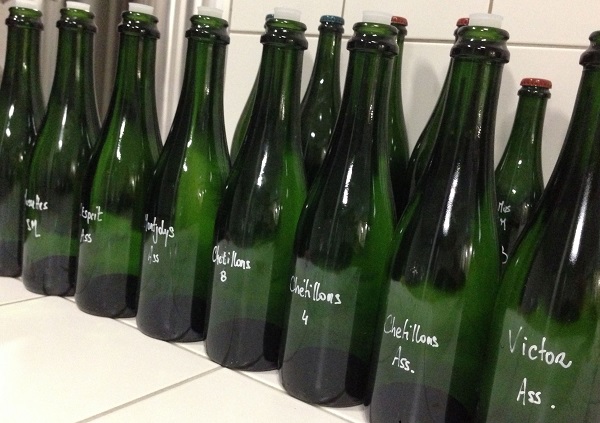 Champagne coverage continues over the next few weeks with a comprehensive look at new releases along with vertical tastings of Salon and Taittinger’s Comtes de Champagne Rosé, plus an update on how some of the larger houses are increasing their transparency to the consumer.