Clos du Mesnil is one of the most revered sites in Champagne. Rémi and Henri Krug bought the 1.84-hectare vineyard in 1971 with the goal of securing a high-quality fruit source. But once they started working with the fruit, they realized they had something special. The first Clos du Mesnil, the 1979, remains epic to this day. Although not be design, Clos du Mesnil is also the archetype for what many grower Champagnes would later become – single vineyard, single variety, single vintage wines. I recently had the chance to taste the 2006 Clos du Mesnil, the latest release, with Olivier Krug over Zoom, which is how everything seems to happen these days.

Krug presented three wines in what they call their “Soloist to Orchestra” tasting; the 2006 Clos du Mesnil, Vintage and 2006-based Grande Cuvée. All the wines reflect the warm, radiant weather that is the single most distinctive attribute of the vintage. I have to admit, this presentation made me chuckle, as it was not too long ago that Krug adamantly refused to provide the market and consumers with any detail whatsoever about their Grande Cuvée. “The market can’t handle that,” I was told steadfastly in the old Krug tasting room in Reims. “If Grand Cuvée releases were differentiated you could do all sorts of things, like market mixed 6-packs,” I replied. I did not review the Grande Cuvée for a number of years because there was no way for consumers to know if they were buying the exact same wine I had reviewed. Then Krug came up with thematic names for each vintage (for the 2006-based Grand Cuvée it was ‘Capricious Indulgence’) and the Krug ID back label, which gives consumers a great deal of information, before settling on the current ‘Édition’ system, a masterstroke of marketing because it distinguishes each release and also highlights Krug’s remarkable history, something very few houses can match. Brilliant.

But lets get back to the wines. The 2006 growing season was marked by unstable weather and some hail early on. Flowering began in mid-June, which is typical. July saw three weeks of uninterrupted elevated temperatures that marked the wines to a significant degree. Intense heat was followed by heavy rain episodes in which two months’ worth of rain fell in just over two weeks. Dry winds from the north and east at the end of the summer and helped restore balance in the vineyards. Harvest began in mid-September, pretty typical by today’s standards. 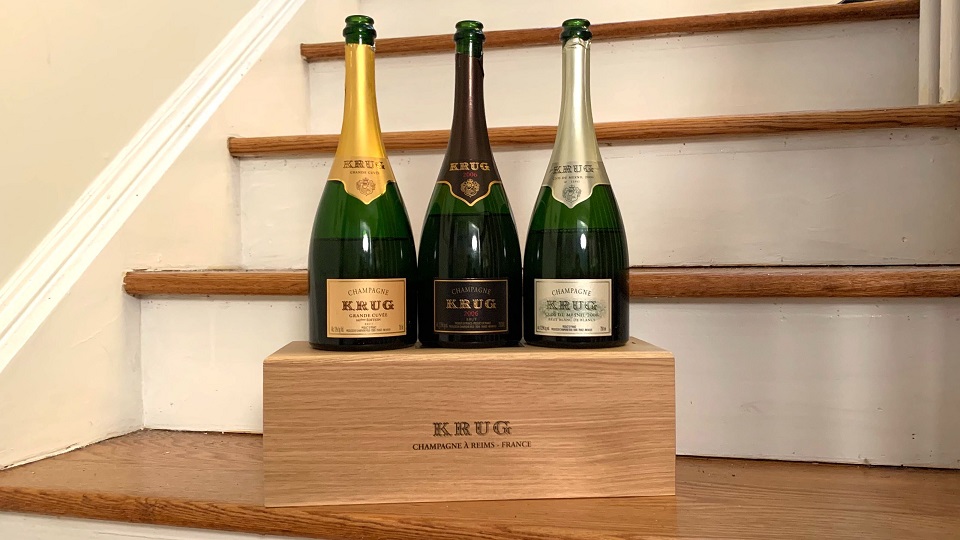 The 2006 Clos du Mesnil was harvested over three days, which is remarkable for a tiny parcel measuring 1.84 hectares divided into five blocks that are often picked over a wider timeframe. Soaring in the glass, the 2006 is stratospheric in its beauty. The richness of the year contrasts so beautifully with the flintiness and energy of Mesnil. With time in the glass the mousse softens, releasing layers of vinous intensity. Tangerine oil, pastry, lemon confit and marzipan all build effortlessly. The 2006 is sumptuous, racy and exotic to the core, with all of that richness supported by a phenolic, intense frame. This is Krug ID: 319030.

The 2006 Krug Vintage is fabulous. Here the richness, breadth and texture of Pinot come through loud and clear in a Champagne that is classic Krug. Red plum, coffee, spice, baked apple tart and lemon confit all flesh out effortlessly in the glass. The ripeness of the year is evident, and yet the vibrancy of the Chardonnay lends so much energy. The 2006 can be enjoyed today, but also has the balance and stuffing to develop well for many years to come. This is a superb showing from the 2006. This is Krug ID: 118014.

The NV Grande Cuvée 162ème Édition, built around the 2006 vintage, is fabulous. All of the natural radiance and intensity of the year comes through in the wine’s ample, resonant personality. Apricot, peach, mint, chamomile, baked apple and lightly honeyed notes all build in racy, sumptuous Grand Cuvée that delivers the goods big time. Readers will find a gorgeous, open-knit Champagne loaded with class and personality. The 162 is still a baby, in fact it hasn’t aged much at all since I last tasted it in 2014, although this is a recent disgorgement. This is the first release that transitioned to the Édition labeling, which was used for some of the later batches, with the 163 being the first wine released as an Édition from the very beginning. Readers will find a small amount of the 162 on the market, most of it reserved for three-packs with the Vintage and Clos du Mesnil, and yes, you guessed it, mixed six packs in wood cases spanning two series; the Éditions 161 through 166 and Éditions 162 through 167. It is an absolutely gorgeous wine. The 162 is based on 2006 and includes wines from 11 vintages going back to 1990. This is Krug ID: 416037.

Lastly, earlier this year Krug appointed Julie Cavil as the new Chef de Caves. Cavil joined Krug at the end of 2006 and was groomed to be outgoing Chef de Caves Eric Lebel’s successor in a gradual transition that was carefully planned. I met Cavil the first time many years ago at Clos du Mesnil, which was her focus back then. Needless to say, it will be very interesting to see what the future holds at Krug.