A recent vertical of 1980s Cristals was the third chapter in a remarkable series of tastings I have been fortunate to experience at Roederer over the last few years. In each of those occasions, I have come away with a deeper understanding of what makes Cristal and Cristal Rosé so special. For this tasting, longtime Chef de Caves Jean-Baptiste Lécaillon presented a complete vertical of the 1980s Cristals, all from the original disgorgements. (Cristal was not released in 1984, 1986 or 1987.) As much as I hope the accompanying tasting notes will be of interest to Vinous readers, Lécaillon’s comments on the vintages, a group of wines that chronicle an age in which so much in Champagne evolved – most notably farming practices and the encroachment of climate change – are a precious contribution to our collective culture and understanding of these wines and Champagne more broadly.

First created in 1876 as a special high-end cuvée for Tsar Alexander II, Cristal is one of Champagne’s most iconic wines and Roederer’s flagship. The distinctive transparent glass bottle (originally lead crystal) adds to Cristal’s allure. Cristal is approximately 60% Pinot Noir and 40% Chardonnay sourced from a collection of estate vineyards in Verzenay, Verzy, Beaumont-sur-Vesle, Aÿ and Mareuil-sur-Aÿ for the Pinots, and Avize, Mesnil and Cramant for the Chardonnays. Readers who want to learn more about the history of Roederer and Cristal may want to revisit my articles Roederer Cristal: That ’70s Show and Roederer Cristal Rosé: A Journey Through Time 1976-2007. 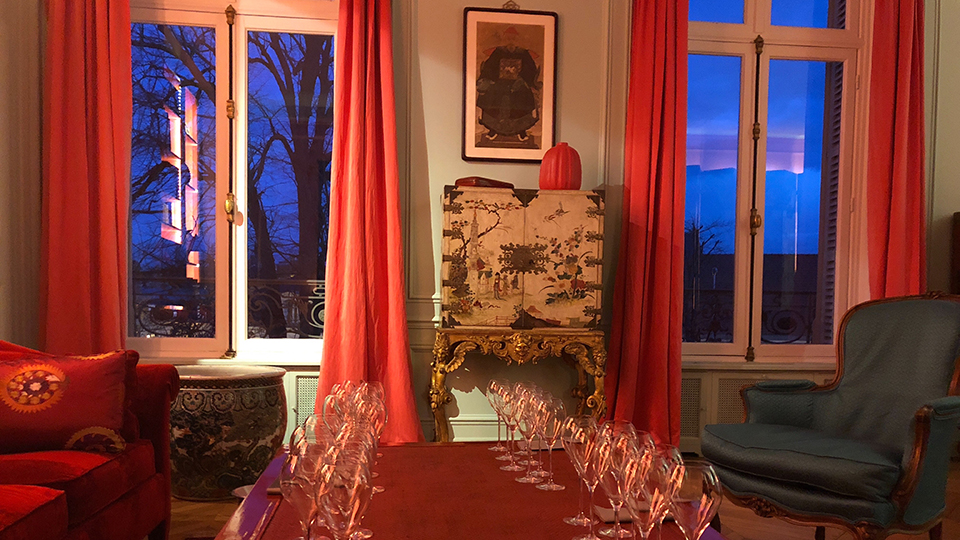 The 1990 Cristal is remarkable. Polished, nuanced and light on its feet, the 1990 is all class. Citrus, orchard fruit and floral notes are wonderfully lifted throughout. A slight reductive note adds character on the finely knit finish. I can’t think of a better way to start this tasting. Simply put, the 1990 is a total rock star. Moreover, it is much more delicate than most wines from this ripe vintage. Amazingly, the 1990 tastes like it is still not ready! “Nineteen ninety was my second vintage here,” says Chef de Caves Jean-Baptiste Lécaillon. “It was ideal. The fruit was just perfect. We blocked the malolactic fermentation completely and only fermented 6-7% of our lots in oak, as opposed to the more typical 20%, in order to preserve as much freshness as possible. The wine was made by my predecessor, Michel Pansu, but I was learning. This was the first year I started working with oxygen by reducing sulfites in vinification to pre-oxidize the Chardonnay musts, as I do know, which allows me to get rid of all the unstable, oxidative compounds. With Pinot, on the other hand, you need a little bit of sulfur at crush or you lose the brilliant fruit." 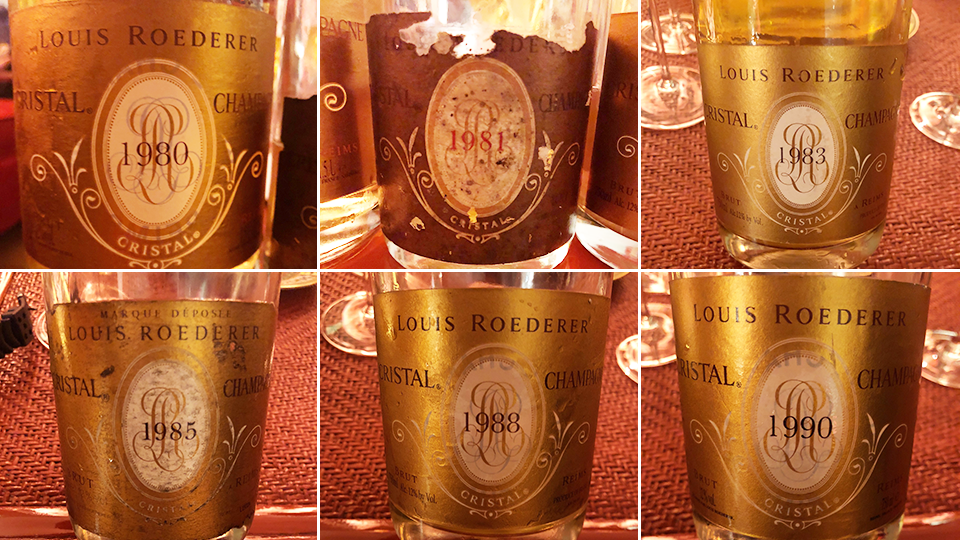 Hints of caramel, orange peel, apricot jam and spice run through the 1989 Cristal. Ample, creamy and generous, the 1989 is in great shape today. The slightly forward aromas and flavors suggest the 1989 has arrived at a plateau of maturity. I would prefer to drink it over the next decade or so, although the wine has more than enough density to hold for many years. I have had fresher bottles of the 1989, but this is a fine showing just the same. The 1989 is always a silky, gracious and totally understated Cristal, as it is once again today. “Nineteen eighty-nine was a riper year, and therefore more Pinot-driven, with about 63-64% Pinot in the final blend than the more typical 60%” adds Lécaillon.

One of the two or three most moving wines in this vertical, the 1988 Cristal is eternal. Deep and vertical, with Gothic spires of soaring aromatic, flavor and structural intensity, the 1988 has it all. At thirty years of age, the 1988 is fresh, vibrant and incredibly powerful. Lemon peel, white flower, chalk and almonds are all given an extra kick of vibrancy from the bright acids and underlying energy of the vintage. Even after three decades, the 1988 remains searing, classically austere and beautifully focused, with tremendous pedigree and stunning balance. The 1988 is a rare Cristal where the Chardonnay, at 48% of the blend, is on the higher side. “When I joined Roederer in 1989, we were blending the 1988s,” Lécaillon explains. “They were such hard wines to work with because the acidities were so high. My teeth suffered. I thought ‘am I going to have to deal with this for the rest of my life? Maybe I should change jobs?’” Luckily, he did not. “In 1988, flowering was very bad for the Chardonnay. Yields were quite low and flavors were super-intense and concentrated. This, to me, is one of the keys for making great Champagne with real dimension. Interestingly, the same is not true of Pinot Noir. Keep a glass of the 1988 to compare with the 2008 later. In my opinion, 2008 is the new 1988.” 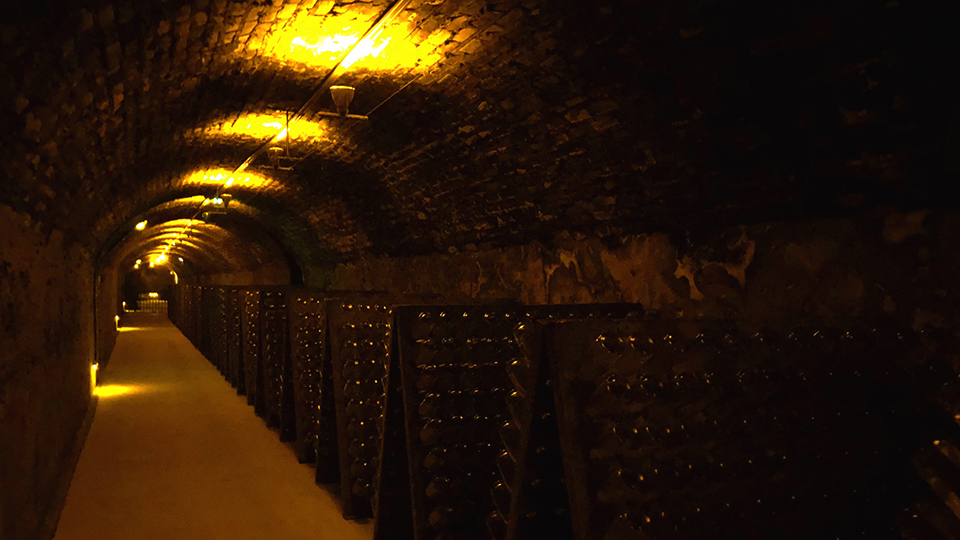 The 1985 Cristal is powerful and resonant on the palate, with just the earliest hints of oxidative notes starting to appear. The 1985 may not have quite the layers, focus or pedigree of the very best years, but it more than makes up for that with its inviting, generous personality. There is so much to like, including the wine’s soft curves and racy feel. The 1985 is an especially opulent Cristal, with attractive smoky and torrefaction overtones, and exceptional balance. “In 1985, we had a severe frost that lowered yields dramatically,” Chef de Caves Jean-Baptiste Lécaillon recounted. “It was a vintage to handle carefully. From what the old-timers told me, because I was not here, set was so bad that the percentage of stems relative to fruit was quite high. Our crew works hard to cut as close as possible, especially in challenging vintages. But I imagine some stems and underripe berries made it into the tanks, resulting in somewhat green, bitter flavors at pressing. In the end though, those qualities have been pretty good for aging. Ultimately, Champagne is a battle between ripeness and greenness. If you are too ripe, you have rot, and if you aren’t ripe enough, you are green. You need to find the optimal window for picking.” 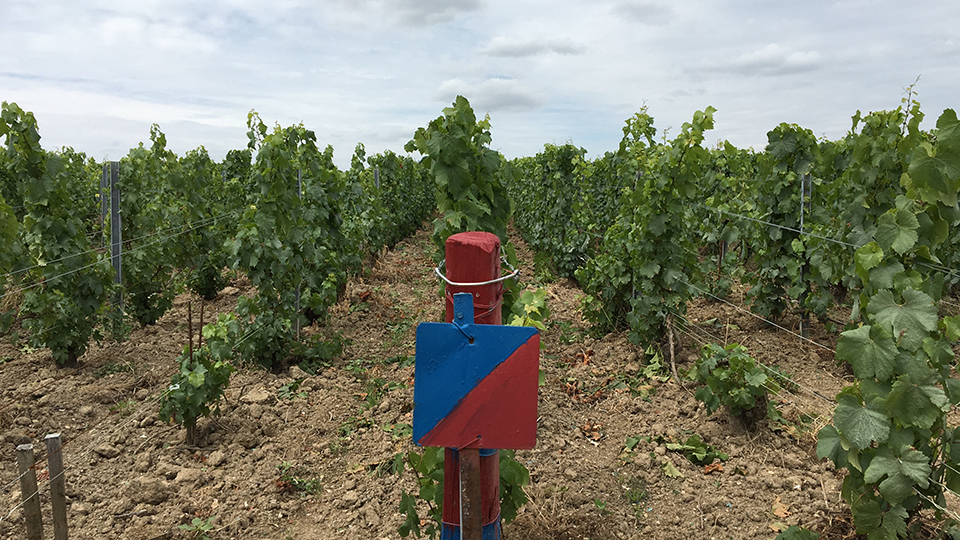 Roederer has taken a leadership role in biodynamics and now farms more biodynamic vineyards than any other house in Champagne. This parcel in Pierre Vaudon in Avize is split between conventional and biodynamic farming and is used to evaluate the benefits and limits of both approaches

The 1983 Cristal is fabulous. Rich, ample and generous, the 1983 is incredibly inviting, with tons of class and personality. A wine of real volume and textural breadth, the 1983 has enough pedigree to drink well for many years. None of the elements stand out in the 1983, the whole is far greater than the sum of the parts. “Nineteen eighty-three is a different animal from some of the other wines of the decade,” Lécaillon explains. “It was a heavy crop, with a lot of fruit. There was so much wine in the cellar that the team could not get to everything in a timely fashion, and so there were some lots that started to oxidize a bit, and that, naturally, made the wine bigger.” In tasting, though, there are no off aromas or mushroomy flavors that suggest the wine is fading. If anything, the 1983 is spectacularly beautiful right now, even in the presence of other wines from more highly reputed vintages.

One of my all time favorites, the 1982 Cristal is magnificent. Fresh, nuanced and exceptionally beautiful, the 1982 remains one of the all-time great Cristals. Apricot, almond and chamomile nuances suggest the 1982 is just starting to turn the corner into its plateau of maturity. This bottle lacks a bit of excitement, but, then again, the 1982 Cristal is not exactly the sort of wine I get to taste on a regular basis, so it is possible this is not the best showing. Hopefully, I will get a chance to taste it again soon. Even so, well-stored bottles will drink well for another decade-plus. “In my opinion, 1982 is the first vintage of climate change in Champagne,” Lécaillon explains. “Sugars were higher than we were used to seeing. As a comparison, the 1981 Cristal is also concentrated, but it is concentrated by low yields. In 1982, we had high yields and elevated ripeness, meaning it was the sun that ripened the fruit." 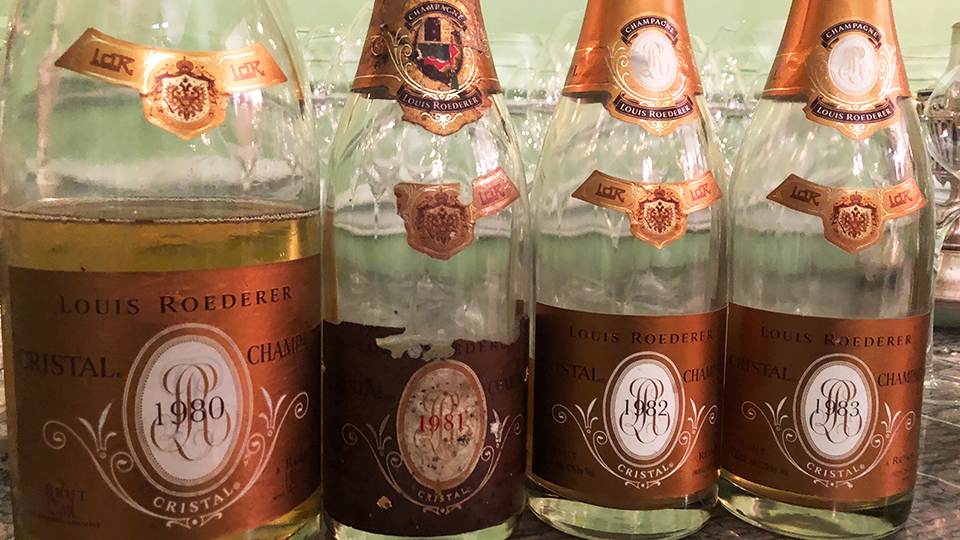 On Climate Change in Champagne

“I think climate change arrived at the wrong time in Champagne,” Lécaillon explains. “It came in the 1980s, when houses shifted to full herbicides, stopped working the soils, and planted clonal selections designed to maximize yields. At the same moment, the climate began to warm. Producers ended up with unexpectedly high yields. Because of this solar envelope, the wines lack connection to the soil. So, what we did, starting in 1996, is we stopped farming with herbicides and now we till the soils to encourage the development of deep root systems. The more sun and photosynthesis you have, the more soil you need to compensate, so you have to get the roots deep down into the chalk. If you do that properly, you can deal with climate change and maintain freshness from the soil in the wines.” 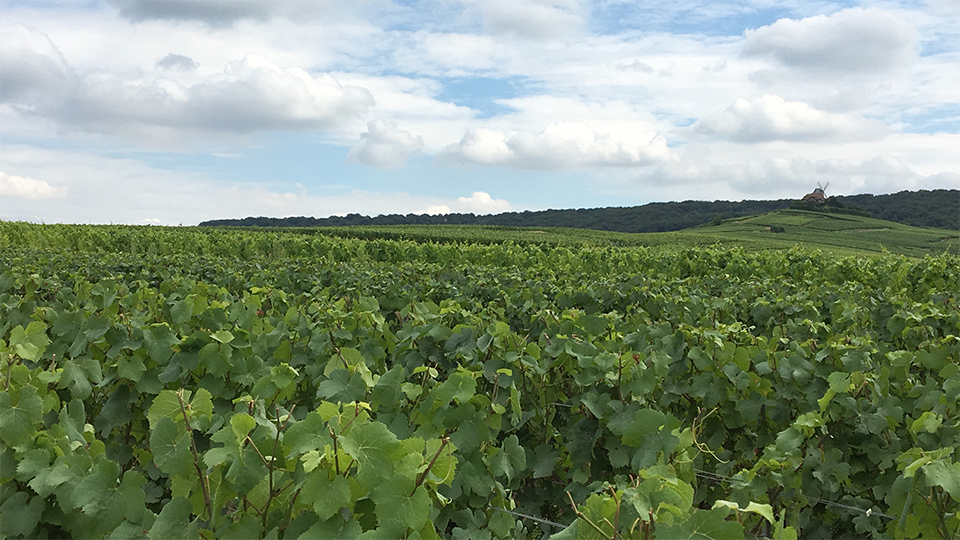 A shot from the Pinot Noir fields of Verzenay, one of the core components in Cristal

Another highlight in this tasting, the 1981 Cristal is ridiculously great. Powerful and resonant in the glass, yet also nuanced, the 1981 is just starting to show the first signs of full maturity. Candied orange peel, apricot, dried flowers, chamomile and exotic spices all fill out the wine’s ample frame effortlessly. “The 1981 Cristal is really the last wine of the pre-climate change era in which the flavors were concentrated solely because of low yields,” Lécaillon continues. Even without that fascinating background, the 1981 is a stunning Champagne.

I can’t think of a better wine to end with than the 1980 Cristal. Utterly dazzling from the very first taste, the 1980 is simply breathtaking. Citrus, chamomile, mint, white pepper, crushed rock and expressive floral notes abound, with razor sharp beams of supporting chalkiness that give the wine tension and energy. Tiny yields and strict selection resulted in a very small production that Roederer chose to bottle only in magnum. There is just not much else to say except that the 1980 is a riveting, arrestingly beautiful wine that remains as a vivid testament to a previous era in the history of Champagne.

See All the Wines in the Order Tasted (Youngest to Oldest)