Grilled sea bass with artichoke and eggplant, clams, calamansi and an artichoke emulsion

The Basque region is a Mecca for holidaymakers: an idyllic assemblage of quaint villages, vistas dappled with squat baserri attired in their vivid red timber frames, lush rolling verdure set against the Pyrenean/Atlantic backdrop, isolated beaches and, not least, a mouthwatering gastronomic nexus that cherry-picks the best of France and Spain. The mass migration of tourists means that there are countless restaurants to choose from, and in general the standard is high compared to many regions. As you would expect, the Pays Basque has its own regional delicacies: Kintoa ham, gâteau basque (the cherry-filled individual ones from Pariès are to die for) or Espelette peppers from the namesake village, the secret ingredient of chefs around the world. It is easy to eat well.

The coastal port town of Saint-Jean-de-Luz is surfeit with bistros and restaurants. No doubt somebody will add to my brief list, but research uncovered four that regularly attract gastronomes: Chez Mattin, Le Kaiku, Xaya and Zoko Moko. Alas, Chez Mattin and Kaiku were both fully booked, but I reserved tables at the latter pair. They made for an intriguing comparison, one of them coming out on top; I shall explain why over two Vinous Table reviews. 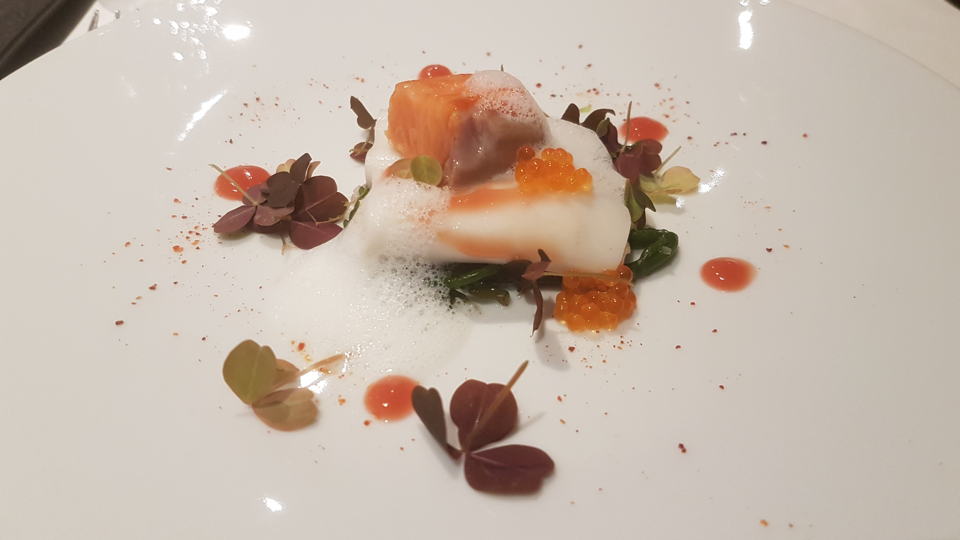 A fine trout starter, though it left me praying that the main course was more filling.

Zoko Moko translates as “cozy corner” in the Basque tongue. “You must go,” a friend told me. The restaurant lies just off the busy, noisy central square in Saint-Jean-de-Luz, thankfully out of earshot of the buskers’ booming PA system. It is a small restaurant, with around 40 covers plus a couple of tables outside. Families are welcome, and it was pleasing to find plenty of well-behaved children on the night of my visit, lending it a casual but respectful atmosphere. The kitchen is located toward the rear, separated from the dining area by a small corridor. The menu is Basque cuisine, though it is far less rustic than many others. The presentation of every dish was meticulous, obligatory edible flowers sprouting up between almost every main ingredient. Aesthetically, Zoko Moko is the best I have found in the area – but more on that later.

We began with a small amuse-bouche of creamed artichoke and grilled hazelnut. The artichoke could have done with a little more seasoning, although the nutty bite of the hazelnut gave it a much-needed edge. 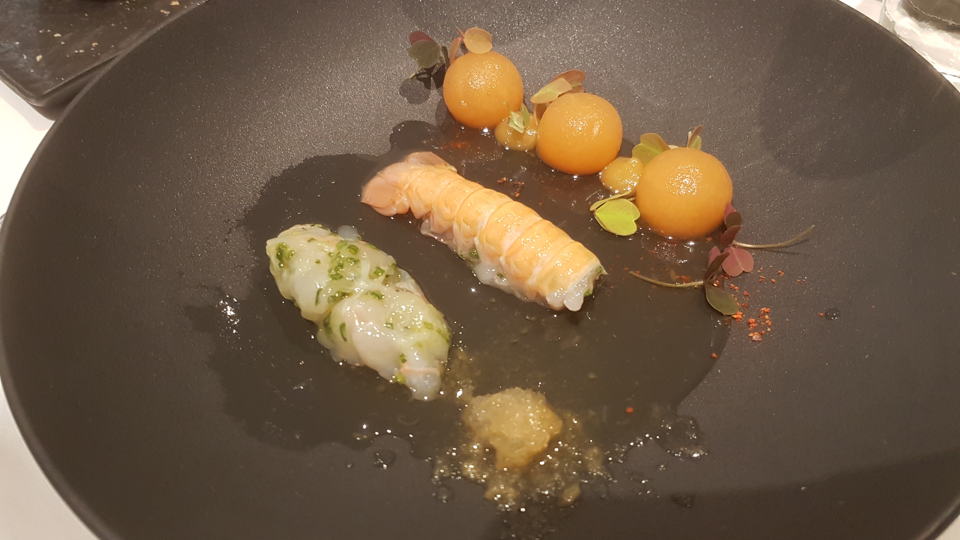 Langoustines...or maybe that should be singular?

We shared three starters. The trout served two ways came with rillette, cod roe, samphire and a lemongrass emulsion. The quality of the fish was outstanding but there was not much of it - several mouthfuls and it disappeared into a memory. The samphire was perfectly cooked, although I found the lemongrass emulsion lacking in intensity. It was a well-thought-out dish that could have been executed better.

The langoustines en tartare came with sliced fresh melon and white peach, served with an Earl Grey bouillon. I was attracted by the bouillon; however, like the aforementioned emulsion, its flavor was difficult to discern, which was a pity, as the langoustines were moist and delicious. Best was the spelt risotto with sheep’s cheese and organic vegetable tempura with ewe’s curd cheese foam. It was the most substantial dish of the three and delivered the most flavor, the risotto cooked supremely well, likewise the tempura. 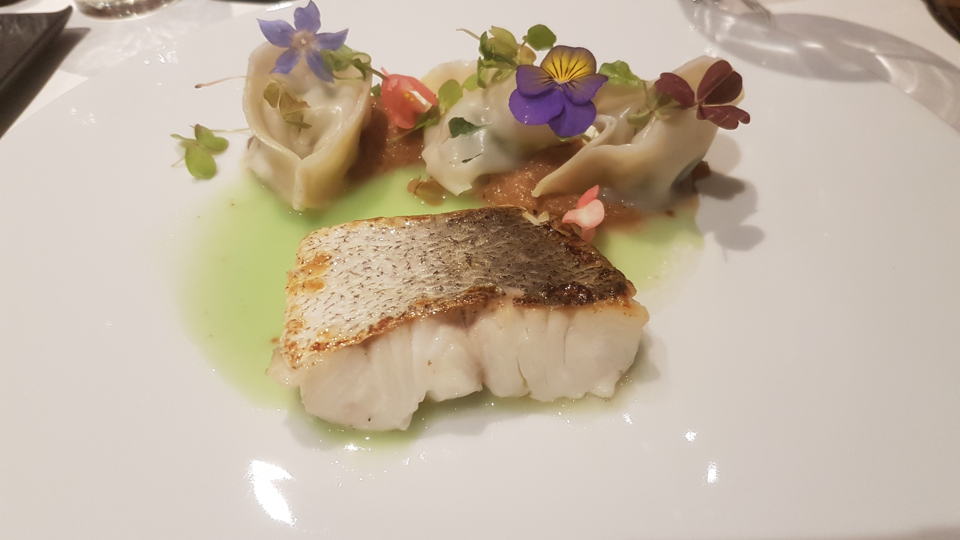 My hake dish with its watery salsa verde and rubbery ravioli.

For mains, we stayed faithful to the fish course. The grilled hake with squid ravioli, onion compote and salsa verde sauce was hit and miss. The hake was perfectly cooked with a light, crispy skin, but again, the portion was stingy. I wondered whether a memo had been sent to the kitchen that I was on a strict diet. Unforgivably, the salsa verde was watery and bereft of flavor. It is extremely rare for me to send back a dish and cause a kerfuffle, but I came close. The squid ravioli was decorated with purple edible flowers, which was very pretty, but it was overcooked and consequently rubbery in texture, not to mention exhibiting negligible squid flavor. The ravioli tasted rather neutral and forgettable. This dish left me perplexed, and the meal sagged at a crucial point. 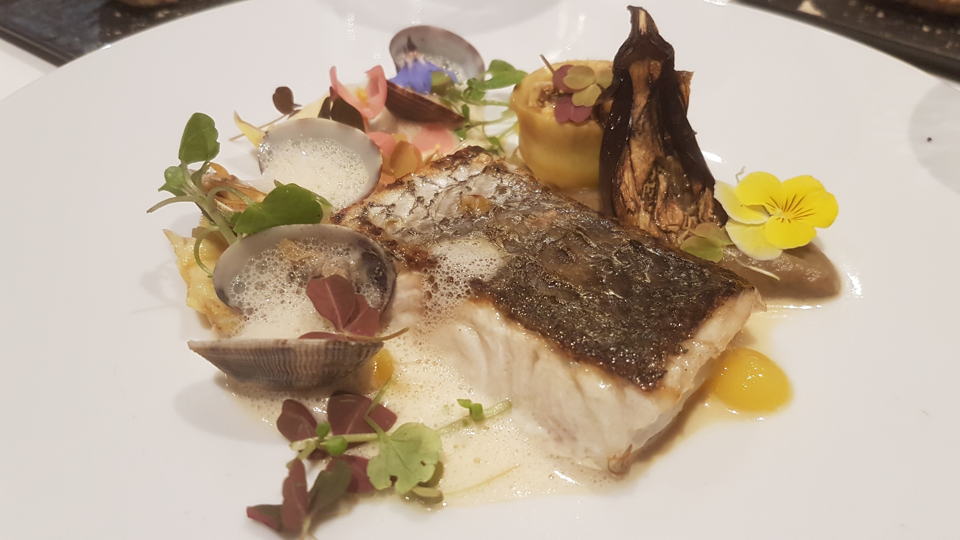 Delicious sea bass and clams, but the eggplant was overcooked.

Sharing dishes, I hoped to find compensation elsewhere. The grilled sea bass with artichoke and eggplant, clams, calamansi (a citrus fruit otherwise known as calamondin or Philippine lime) and an artichoke emulsion was not without fault. The eggplant was (again) overcooked and rendered inedible. Such a shame, as the sea bass had a lovely meaty consistency and, like my hake, was cooked to perfection. Given the reputation of the restaurant, I was beginning to wonder what the fuss was about. 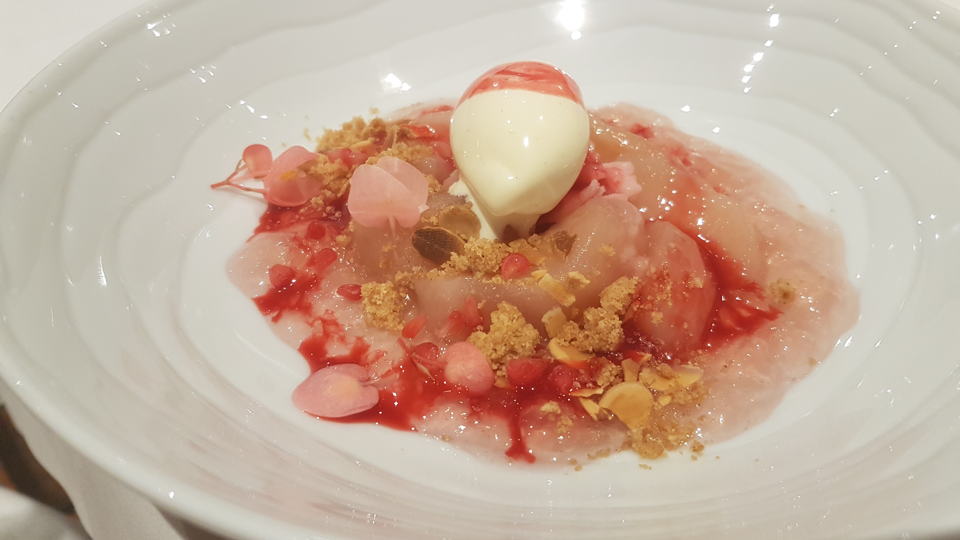 Just at that moment, my wife was informed that the chef preparing the desserts was from her home country of Japan, so all I can say is: “Omodeto gozaimasu” – congratulations. This young chef saved the day. He hit the ball out of the park with his stunning deconstruction of a peach Melba. Like the other dishes, it looked a million dollars; the difference was in the execution. There was complete harmony of flavors, the white peach revitalizing the senses, the panna cotta lending sweetness and texture, the hazelnut crumb adding bite and a boule of vanilla ice cream and strawberry sauce rendering it utterly seductive without overwhelming the peach. The edible flowers added subtle flavor instead of mere aesthetic enhancement. Blissful! Alternatively, there was an excellent Guanaja chocolate mousse: perfect in consistency, not too heavy and served at exactly the right cool temperature. It was scrape-your-bowl delicious.

In terms of wine, there is a very limited selection, although I was pleased with my choice of 2018 G. 1200 from Ekologikoa. It offered lively fresh apricot and nectarine scents and an undercurrent of sea spray. The palate was well balanced with a taut thread of acidity, although I was seeking a little more tension and salinity on the satisfactory but rather forgettable finish. I ordered a glass of rosé, a 2017 Irouléguy from Domaine Mourguy. This was disappointing: quite deep in color, showing some signs of volatility on the nose, heavy and flat-footed on the palate. I felt that it was served a degree too warm, but still, it was not good enough, and after a couple of sips, I could drink no more. 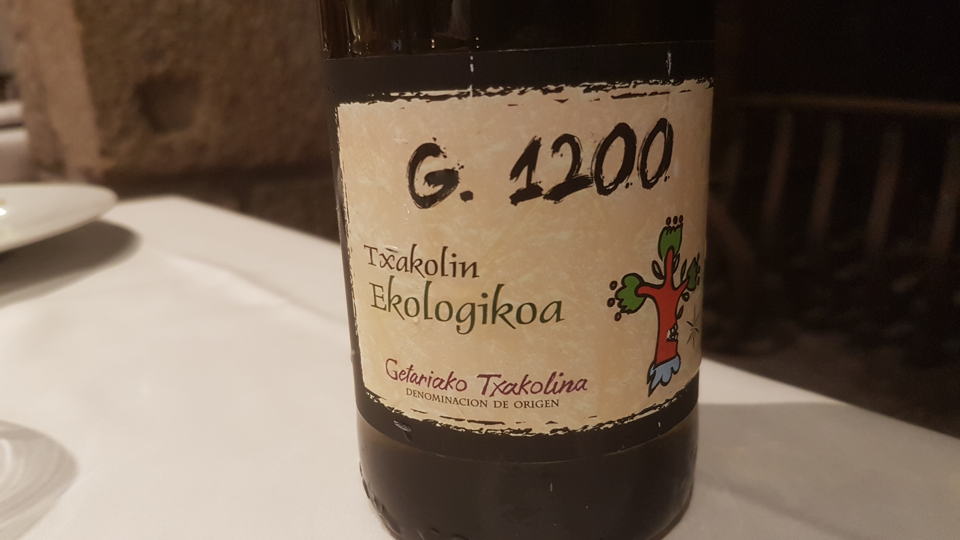 I looked forward to Zoko Moko more than any other restaurant during my time in the Pays Basque. Many had sung its praises, and eating out in Saint-Jean-de-Luz is always a pleasure. I enjoyed the evening; the service was excellent, I appreciated the casual atmosphere, and the desserts sent us out the door on a high. It was only when dissecting the dinner for this article that its shortcomings struck home. The photographs flatter the standard of cooking. Maybe I caught the restaurant on a bad night, but quality was so uneven that I can only conclude Zoko Moko is focusing too much on presentation and – dare I say – what might appeal to a restaurant inspector, making glaring and often basic errors in the process. It would not take much to improve, but I feel that Zoko Moko’s head chef took his eye off the ball too many times.

For one of my next Vinous Tables, I will turn my attention to nearby Xaya, a last-minute booking encouraged by what looked to be a promising menu. How will it fare against Zoko Moko?