Hong Kong’s 8½ Otto e Mezzo - Bombana restaurant is the only three Michelin star Italian restaurant found outside of Italy. Although not all three star eateries always deliver what one might expect from restaurants with similarly lofty credentials, this specific dinner was easily one of my five best meals of the year. Actually, unless memory fails me, it was one of the two or three best meals I have had in an Italian restaurant outside of Italy in my lifetime. 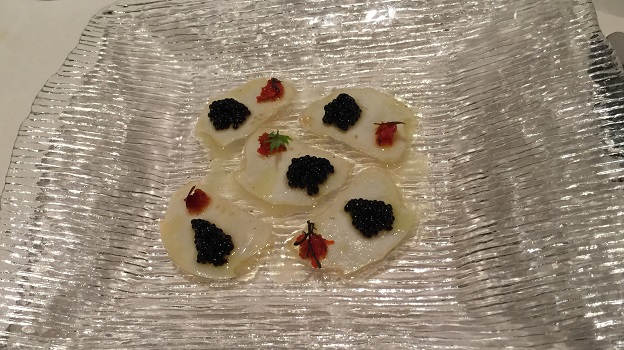 The restaurant’s name is derived from the chef’s last name and his favorite movie. Umberto Bombana is a native of Bergamo who studied under a true Italian master, Ezio Santin of the Antica Osteria del Ponte, located not far from Milan at Cassinetta di Lugagnano and easily one of Italy’s best five restaurants of the 1970s and early 1980s. In 1983 Bombana was head of the cooking brigade at Rex restaurant in Los Angeles (a restaurant that movie lovers will remember especially for the memorable scene in which Julia Roberts has trouble handling snails and risks blinding patrons while uttering the line “… slippery little suckers…” in Pretty Woman, the smash 1990 movie hit with Richard Gere. In that movie the Rex was called ‘the Voltaire’). Bombana moved to Hong Kong in June 1993 to open the Toscana restaurant in the Ritz Carlton hotel. In the years that followed, Bombana consulted for many Ritz Carlton restaurants, such as those at the Laguna Niguel, Boston, Osaka, Seoul and Singapore properties. In 2006, Bombana was elected world ambassador for the white truffle of Alba by the Enoteca Regionale di Cavour. In 2010 Bombana finally opened 8½ Otto e Mezzo - Bombana and immediately earned two Michelin stars. The third star arrived in 2011. Bombana has since opened 8 ½ Otto e Mezzo Bombana Shanghai in 2012, Opera Bombana in Peking in 2013, and a third 8 ½ Otto e Mezzo Bombana at the Galaxy Macao. The other component of the restaurant’s name, the 8½ Otto e Mezzo, is a nod to Bombana’s favorite Italian movie director, Federico Fellini, whose delightful 1963 movie 8½ won a Best Foreign Film Oscar. 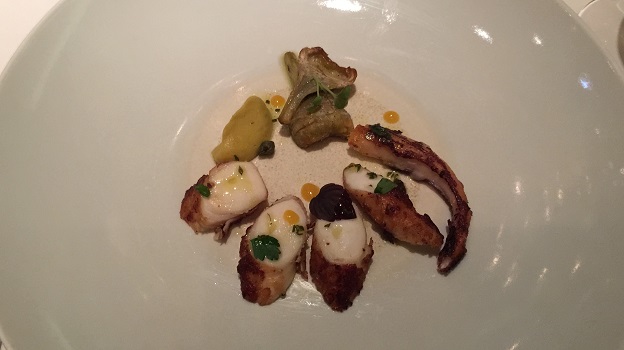 All of the above would be absolutely meaningless if the restaurant wasn’t so good. The dining room is spacious, the acoustics fine, the service accomplished and professional yet friendly, and the patrons well heeled and well behaved. General manager Marino Braccu, restaurant manager Sandro Bruno and the rest of the 8½ Otto e Mezzo team ensure a highly professional and attentive ambience, without any distractions from the food and wines. Most importantly, the food is exceptional, and the wine list offers plenty of great bottles to choose from. Although there are clearly two and three star Michelin restaurants around the world that boast larger selections than you’ll find here, the estates and wines at 8½ Otto e Mezzo Bombana are extremely well chosen. 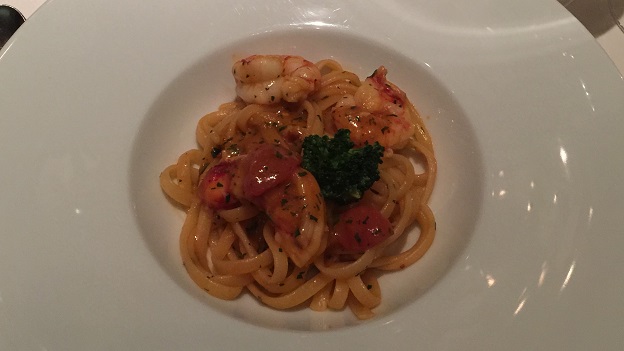 Overall, the dining experience is memorable, with very accurately cooked fresh ingredients and many preparations that really could have been made in Italy. The two antipasti I tried were just about perfect: the confit abalone carpaccio with sweet pepper, semi-dried tomato and Royal Osetra caviar- although not especially Italian- was delicate yet intensely flavorful (the abalone came from Australian waters) while the roasted octopus and roasted artichoke with greens and lemon oregano dressing was a wonderfully perfumed and tasty rendition that took me immediately back to some of my preferred Italian coastal trattoria hangouts (admittedly, these are not trattoria prices). The linguine “Gentile” with red king prawn, confit tomato, red peppers and broccoli was easily one of the two best pasta dishes I had in 2016. A mesmerizingly good preparation of very concentrated yet refined aromas and flavors, this was a dish that I won’t soon forget. The high quality pasta by gentile in Gragnano (founded in 1876, so they know a thing or two about pasta) was a real plus too. Honestly, anything that would have followed that tour de force would have been a letdown, and so it was with the otherwise magnificently cooked Brittany blue lobster with braised vegetables, sea urchin and lobster emulsion, which was almost too French in its fattiness. As good as this dish was (and it was terrific), I have had very similar dishes in France and the USA, so the lobster was ultimately less satisfying than the other dishes I tried on the evening. The hearty short rib & beef tenderloin with whipped potato, red wine and plum sauce dish was also very fine with the whisper of plum sauce constituting a fun wink to the Orient. 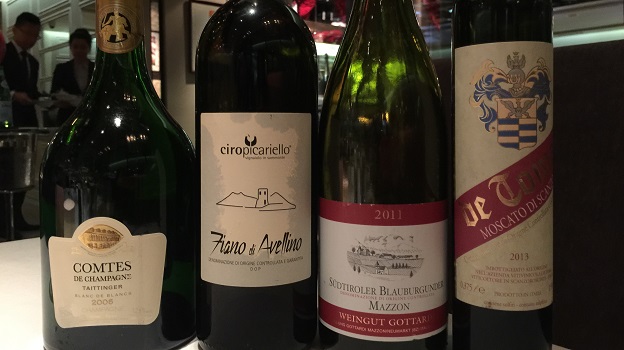 On this night, given the quality of the food, the wines had a tough act to follow but handled themselves well. I can’t think of too many better ways to start off dinner than with a Blanc de Blancs, and the 2006 Taittinger Champagne Comtes de Champagne also enjoys the benefit of being a relatively good buy among prestige cuvées. It is currently a delicate, less showy version of this classic, but that clearly aspires to greatness. It offers magical balance and a suave delivery of lacy apple, pear and floral aromas and flavors of remarkable freshness and precision, and will undoubtedly develop into something special. Ciro’s Picariello 2014 Fiano di Avellino is always a sure bet and rarely disappoints. Crisp green apples and zingy lemony acidity greet the palate and wipe it clean of any food particles still clinging to the taste buds, readying them for the morsels to follow. Its aromas and flavors have sneaky concentration and linger impressively; even better, it is a very varietally accurate Fiano that, thanks to a little bottle age, has improved further from when I tasted it months ago. I know few people that would argue my assertion that Italy’s best Pinot Neros are those made by Gottardi; however, the 2011 Gottardi Blauburgunder Riserva Mazzon is still rather tight and unyielding at present, with the oak showing a bit more than usual presently. I’d forget about this baby in the cellar for at least another three to four years, but the pure red berry and dark plum flavors are very promising, hopefully they will outlast the tannins, which aren’t exactly shy in this vintage. Last but not least, I finished things up with the truly memorable 2013 De Toma Moscato di Scanzo, an aromatic sweet red wine made around the hills of Bergamo from the rare Moscato di Scanzo grape. One of my favorite Italian wines (it couldn’t be any different, given that I grew up in Bergamo and still consider it my second home after Rome), this beauty showcases uncanny balance and was redolent of very pure and precise super-ripe raspberry, red cherry liqueur, violet, cinnamon and nutmeg aromas and flavors that lingered on my taste buds and in my memory cells long after this magnificent dinner has come to a close.