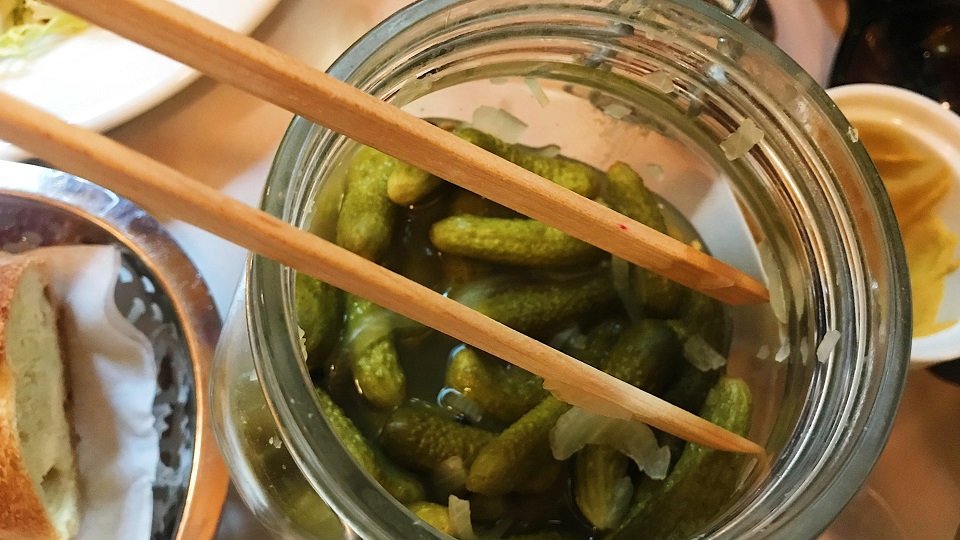 Can't start off things any better than with L’Express' famous cornichions and Dijon mustard!


I have eaten at L’Express, Montreal’s outstanding French bistro and in many ways one of the city’s best restaurants, more times than I care to remember. Wait: actually, no, check that, because I do care to remember. In fact, ever since my post-university days when I lived for almost four years in what is the world’s fourth-largest French-speaking city (after Paris, Kinshasa and Abidjan), L’Express has been one of my favorite restaurants in the world. One of the few, in fact, that I love going back to again and again, never tiring of its food, wine list, decor, and atmosphere – all absolute winners in my book. 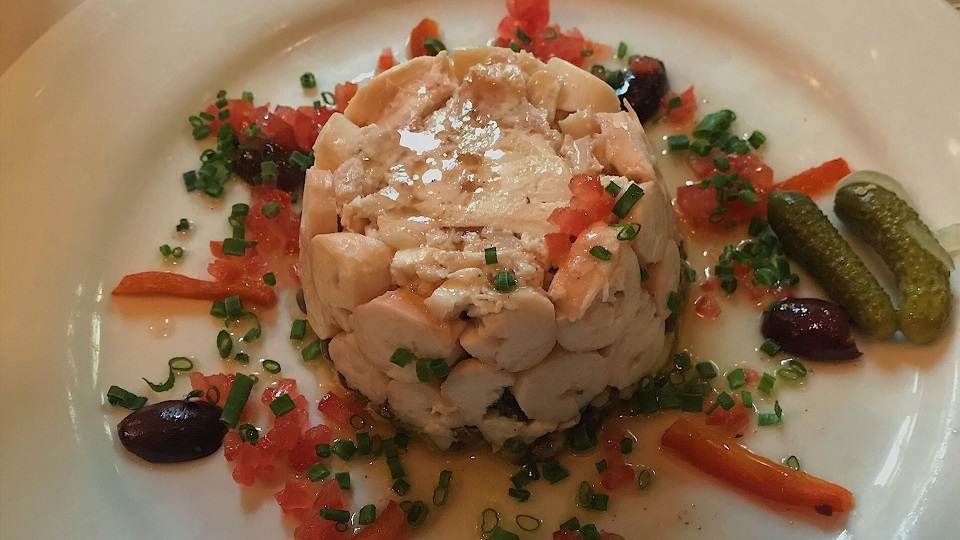 Established nearly 40 years ago by a group of friends (François Tremblay, Colette Brossoit, Pierre Villeneuve and two silent partners) who were lovers of the theatre (Brossoit and Villeneuve actually did work in theatre), the original goal was to create a highly convivial dining spot where artists, technicians, roadies and food lovers alike could come and have a good time, a good meal and a good glass of wine without spending an arm and a leg. L’Express opened in December 1980 on Montréal’s now super-trendy Rue St. Denis (already quite busy and well-frequented back then) and is still its current address today. The tried and true menu, replete with all the French classic bistro dishes, was created by chef Joel Chapoulie, after the original owners tried their hand at cooking (mostly sandwiches and simple fare). And although Chapoulie deservedly retired in 2016 (the chef is now the equally talented Jean-François Vachon), the restaurant’s must-have, signature dishes are still the same: the unforgettable duck leg confit, the thick and strongly flavored fish soup that would make a marseillais proud, the bone marrow with coarse salt, the veal kidney in mustard sauce and the calf liver with tarragon. Also unforgettable, and very much a symbol of everything L’Express stands for, is the jar of small pickles that graces each table, accompanied by a small bowl of strong Dijon mustard. Lunch or dinner at L’Express would not be the same without diving into those little cornichons (prepared twice a day in house). 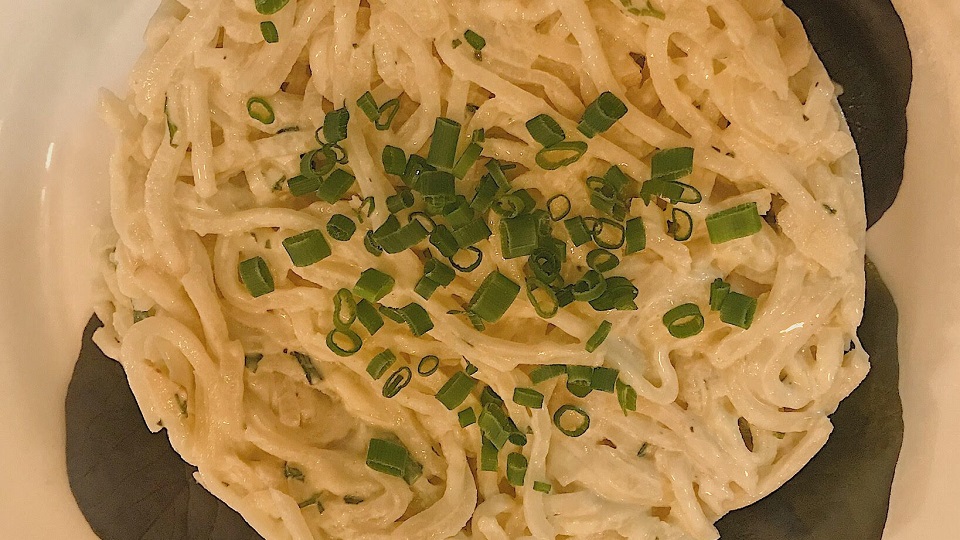 Another focal point of L’Express is its decor, an unabashed success. Designed by super-architect Luc Laporte (whose interior designs are famous and much loved in Montréal), it all begins with the iconic black-and-white checkered entranceway that pulls you in like a magnet. When you enter, you find a few tables to your right and the bar counter with its 15 seats to the left. The room then opens into a bright, larger space that seats about 60, with white tablecloths adorning the tables. Although the restaurant is always packed it never feels cramped, thanks to its luminosity of the space. Without doubt, the juxtaposition of black and white interior elements greatly adds to the restaurant’s chic, timeless atmosphere. 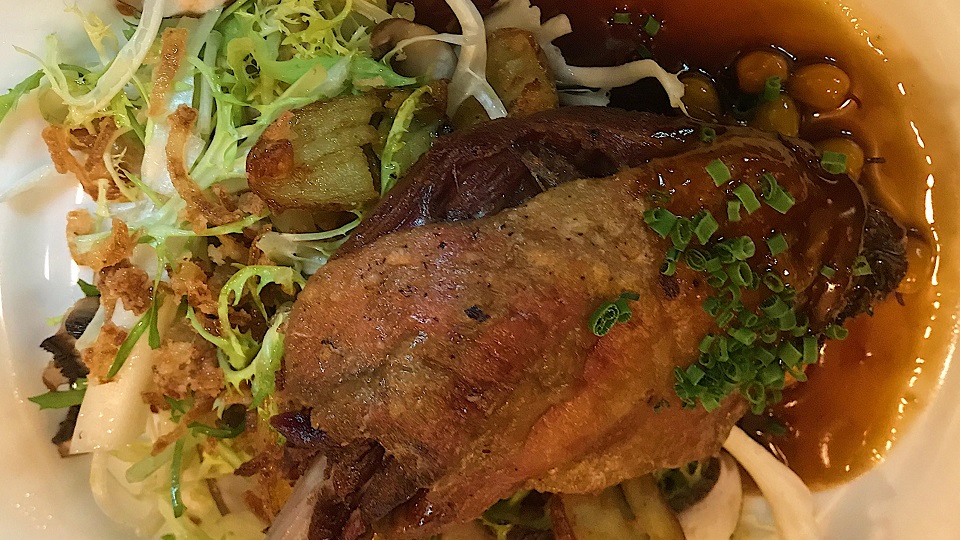 I suppose you could to try to eat poorly at L’Express, but I’m not sure it would ever really happen, for the kitchen expertly delivers well-cooked, flavorful fare. For instance, I’m not the world’s biggest fan of celery root (also known as celeriac) though I know many prefer its earthier, woodsier flavor to that of its above-ground cousin celery, and yet it’s hard to argue with Vachon’s rendition of celeri rémoulade, which is as nicely creamy and tasty as you’d expect to find in Lyon or Paris. I know I might be accused by those who know me of never having encountered a fish soup I didn’t think was delicious, but I admit to having found, this time out at least, the fish soup at L’Express to be less intense than I remembered. In fact, I have never felt L’Express’s version to be the most pungent and deeply flavorful fish soup I have had (I scour the world in the never-ending search for the perfect fish soup, so I’ve tasted quite a few good renditions in my time), but on this occasion it really could have used a stronger garlic and spice presence. Though it was perfectly fine, it seemed a little too subdued, sort of “fish soup for beginners.” By contrast, the duck confit was stellar as always. I first began eating this dish at L’Express in my twenties and haven’t stopped since; it’s usually outstanding, and it was no different this time. Part of the secret to this recipe’s success is the cooking method itself, an ancient technique used to preserve foods at a time when refrigerators were nowhere in sight. It’s a slow-cooking process involving spices, salt and fat that gives the finished meat a fabulous melt-in-your-mouth texture. A generously salted marinade slowly extracts the water from the meat cells, which are then reinflated with fat as the duck cooks gently in that very medium. 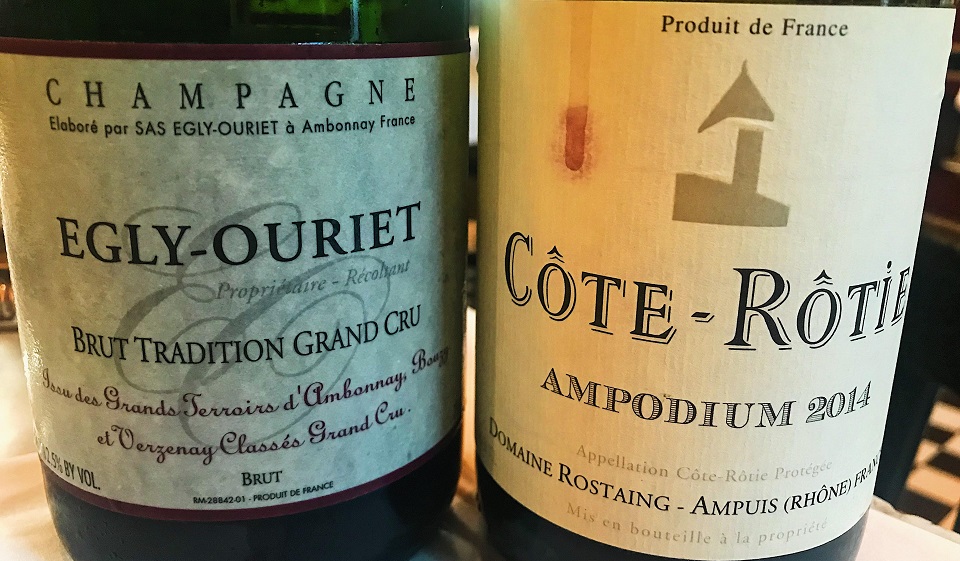 Interestingly, for a restaurant that boasts a wine list with over 11,000 bottles, there is no sommelier at L’Express. Mario Brossoit, who built up what may well be the city’s best and deepest wine list, prefers it that way, aiming for a wine list that will please all palates and pocketbooks. I indulged in two classics, the NV Egly-Ouriet Champagne Grand Cru Brut Tradition and the 2014 Domaine Rostaing Côte-Rôtie Ampodium. The former was its usual delightful self; not just a great way to start off the meal, but also lovely throughout the entirety of the dinner. I found that the red fruit, dried pear, ginger and sweet spice flavors and rich texture nicely stood up even to the duck meat. Rostaing’s knockout Côte-Rôtie Ampodium was just as good with the duck, offering very deep, pure aromas and flavors of violet, smoked beef, black pepper and dark plums. All of Rostaing's Côte Blonde and La Landonne fruit went into this bottling in 2014. It made for a rich, hedonistic end to a wonderful meal, and I lingered in its delightful company right up until closing, the time flying by as I took in the restaurant’s theatre-like view of Montréal life. How appropriate, given its beginnings!