This past fall, I spent the better part of a month driving across Northern Europe for the first leg of my book tour. I ate incredibly well throughout, but one of my most memorable meals was at Restaurang AG in Stockholm. A cavernous, industrial space dedicated to meat above all, AG provided such a thrilling, electric experience that I actually ate there twice—once for a book event, and once purely for pleasure. 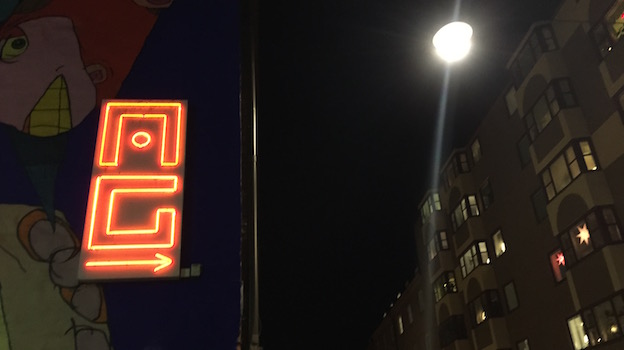 To find AG, one must travel a bit outside of downtown Stockholm and into a more residential neighborhood. The particular street that houses the restaurant was broad and dark, and, with no storefronts to draw pedestrians, completely deserted on both nights of my attendance. That said, once I finally located the building, figured out which unmarked door was the entrance, and ascended the old iron spiral staircase, I was greeted by a remarkable site: a bustling, animated crowd that filled every nook and cranny of the large space. When I commented on the contrast to part-owner Klas Ljundquist, he joked, “yes, we seem to have found the only seedy backstreet in Stockholm.” 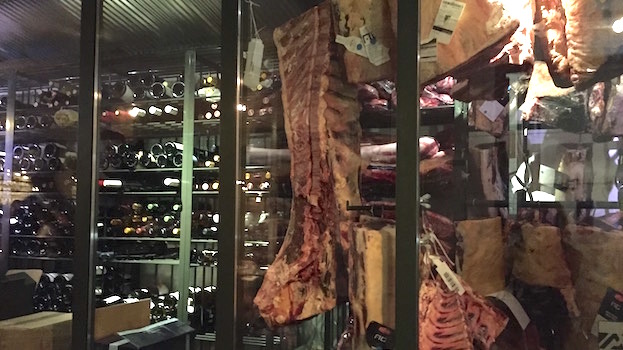 Wine rests next to meat at AG

The building that houses the restaurant is a former silver factory, hence the name (AG is the elemental symbol for silver), and the floor occupied by the restaurant has been smartly redecorated to emphasize its industrial past. Ceiling pipes remain exposed but have been painted white, and all the interior elements are composed of either tile, metal or glass. Giant cuts of beef and other animal segments hang behind glass doors next to the wine cellar, while the giant, vaguely terrifying “meat tree” sculpture between the bar area and the dining room is the only romantic flourish in an otherwise thoroughly modern setting. 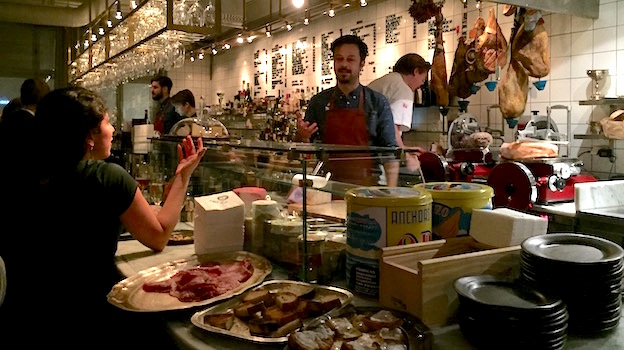 The bar serves a limited menu and is always packed

A moment needs to be spent on the menu, as AG must surely be one of the preeminent destinations for carnivores in the world. The long list of selections changes frequently and spans the globe, and can include such exotic offerings as Chilean Wagyu, Jamon Iberico de Bellota, local dairy cow, a range of seasonal game items, and much, much more. If this sounds overwhelming, don’t worry- an actual “meat sommelier” walks the floor nightly, on hand to assist in matching customer to cut. A particularly exciting part of their menu is dedicated to large format dinners that require a bit of advance planning. This category includes foie gras for 6, ossobuco for 6, a whole turbot for 6, and suckling pig for 8. The wine list, assembled by sommelier Erik Forssell, is also remarkable. It too is international in scope, with an emphasis on European wines from classical regions. The depth of vintages and reasonable prices allows the savvy guest to drink as well as they dine. Which is precisely what I did. 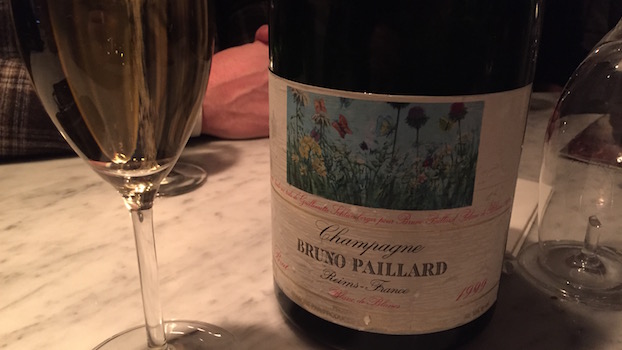 To begin our meal, my group of six headed to the bar, where we enjoyed a magnum of 1999 Bruno Paillard Blanc de Blancs and a few small plates. The champagne was gorgeous, with significant creaminess to the body and rich notes of golden apples, crushed flowers, and the faintest trace of oxidation. It was an ideal match for the incredible lardo toast and fennel salami that we all shared. 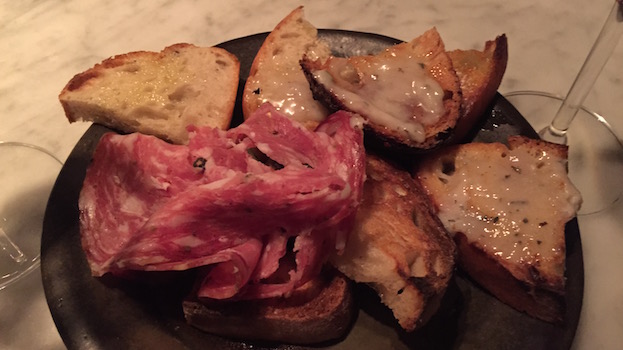 Following our bar snacks, we were ushered into the dining room for the main event. On this particular night, chef-owner Johan Jureskog was joined by a famous Tuscan guest—Dario Cecchini, aka the Butcher of Panzano. Cecchini practically danced around the dining room, trailed by his wife, who translated his Italian exclamations into English. He visited each of the many tables, occasionally stopping to blow on his trumpet, or to wave large cuts of beef in the air. This entertainment added to the already high level of energy, which, as I came to understand during my repeat dinner the following night, is a staple of AG; the place just gets you excited to eat and drink. 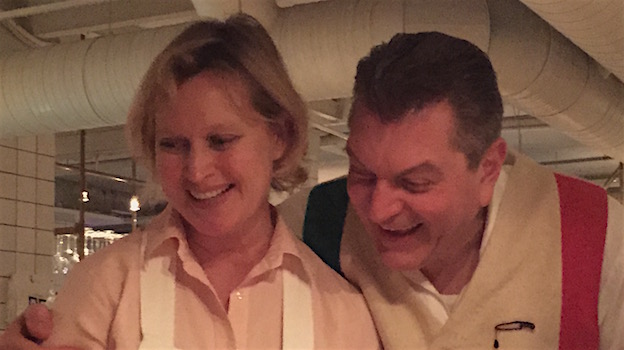 Dario Cecchini and his wife, tableside

The food is generally served family-style at AG and this night was no exception. The first several dishes were presented together on a platter, from which the guest served themselves. Highlights included the “Chianti tuna”, warm beef salad, and the seared rump carpaccio, all of which were flavorful, fresh, and impeccably prepared. In celebration of his native region, Cecchini has developed a “Chianti salt” that he sells at his shop, which is simply sea salt ground with sage, rosemary, and thyme. When used to season food, it is designed to complement the red wines of Tuscany, specially Chianti. Though it made an appearance in several of the evening’s dishes it did not overwhelm, as the herb component was rather subtle. 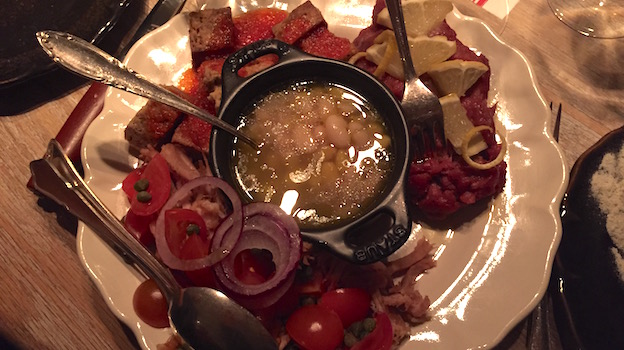 The first course is served family-style

To go with the first round of food, we ordered both a red and a white- the 2010 Leflaive Bourgogne Blanc and the 2011 Mas de Dammas Gausac Rouge. The Leflaive was simply lovely—broad and salty with that classic Leflaive reduction. This is a go-to wine for me; I order it whenever I see it as it always over-delivers for the price. Mas de Daumas Gassac is another sentimental favorite, and this vintage was a delight. Lifted and fragrant, the wine combined high-toned red fruits with a healthy dollop of spice and complicating leather and juniper notes. 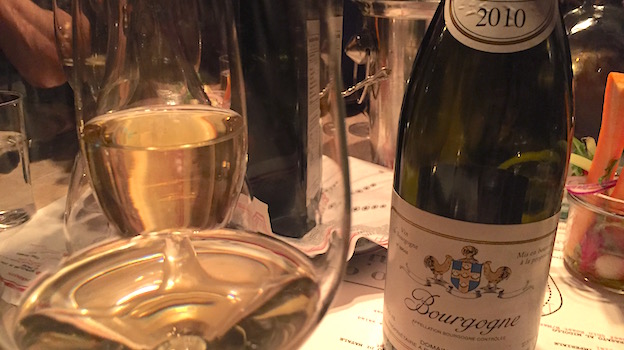 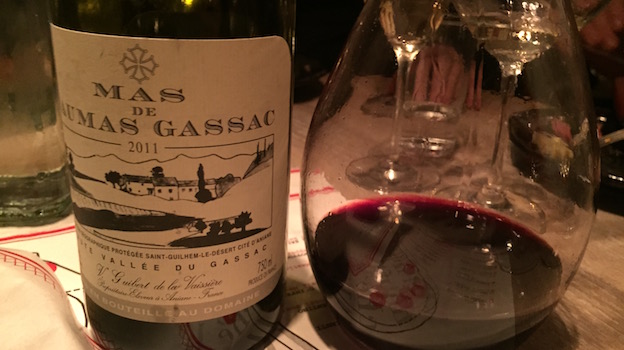 The main course was a selection of Cecchini’s steaks, pre-sliced by the kitchen and presented together on a tray, served with a side of baked potatoes still-wrapped in foil and slathered in butter. There were no light cuts here- each piece contained a good amount of flavorful fat, which melted in the mouth and cried out for red wine. 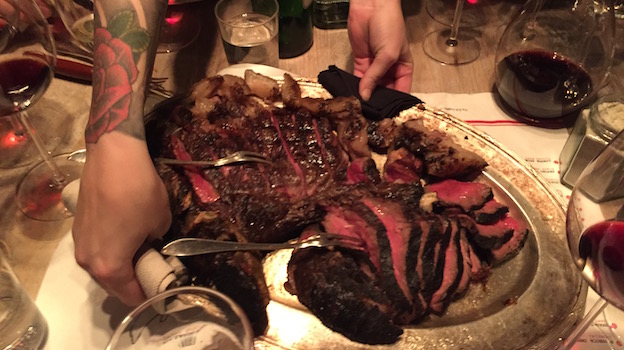 A selection of steaks

To honor the guest chef, we ordered two Italian reds- a 2010 Cappellano Barolo and the 2009 Pergole Torte. The Cappellano was extraordinary- one of the greatest young Barolos I have ever had the pleasure of tasting. It was intricate, floral, and extremely aromatic. On the palate it was perfectly balanced, though still taut and fresh with youth. The impression it left was haunting, and I woke up the following morning still dreaming of this magical wine. Unfortunately, the Pergole Torte did not perform as well. Either the wine was in an awkward place or (more likely) the bottle had experienced a touch of heat at some point in its life. That said, it was still an enjoyable drink, just not as majestic as is typical for Montevertine. 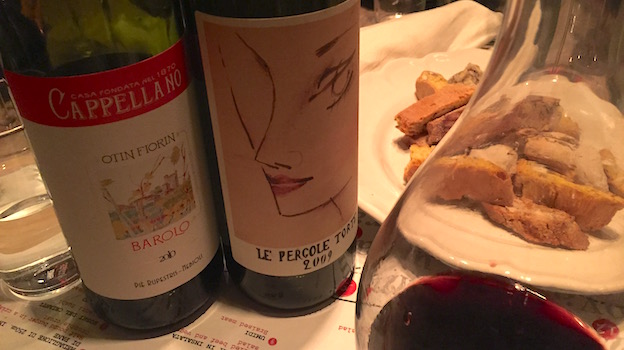 Having escaped the bombings of WWII, Stockholm is one of the most beautiful and historic cities in Europe. It is easy, in a place that old and arresting, to focus solely on the past. My dinners at AG did much more than simply satisfy my body and soul for two blissful nights, they directly exposed me to the young, dynamic, innovative face of one of Europe’s most fascinating capitals. 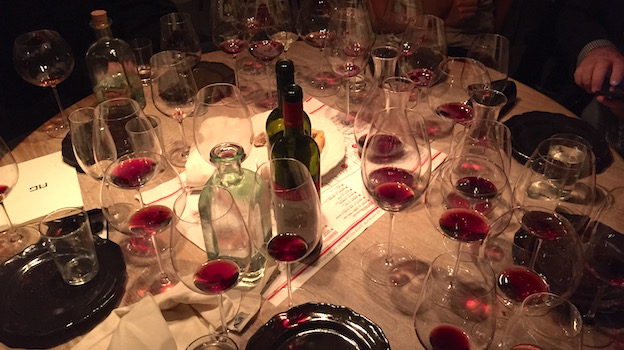