Half a dozen Maldon rock oysters with Chardonnay pickled shallots

Pea soup with langoustines and samphire

This Vinous Table does not concern La Cabotte in Nuits-Saint-Georges. I love its Burgundy namesake. Indeed, they have many similarities. However, if you look out of the window of the La Cabotte in question, you will see harried City workers sweating in their suits, double-decker buses and black cabs; banks and currency exchanges. La Cabotte lies in the heart of the financial centre in London, literally around the corner from the Bank of England. It’s almost perverse that arguably the city’s finest Burgundy-inspired restaurant is located in a postcode that’s never been renowned for fine dining; that has historically tended to drift towards west London and more recently, east and south. Therein lies the genius of its location. La Cabotte is a powerful magnet for legions of Pinot-obsessed stockbrokers and hedge fund managers (who one could argue are the only people that can afford Burgundy’s wines!); it has resisted temptation to fleece the pockets of its affluent clientele and just goes about its job, serving cracking French-inspired cuisine at reasonable prices, its wines mostly devoid of horrendous multiple mark-ups. La Cabotte is rather ace.

I have dined at La Cabotte practically since its opening day. Co-founders and Master Sommeliers Xavier Rousset and Gearoid Devaney are both long-term acquaintances, the former had already opened the widely-praised “Texture” and the popular 28-50 bars, the latter one of the founders of Burgundy specialist, Flint Wines. It occupies two floors with two private dining rooms on the upper level. The décor is simple, with whitewashed hallways and white linen on tables. There’s a bustling atmosphere at La Cabotte, a sense of liveliness. In fact, it can get a bit noisy when the ground floor is full, which it usually is. The menu, under chef Edward Boarland is based around Gallic dishes that have become more and more refined in recent years, to the point where this supper is the best I have ever eaten here. 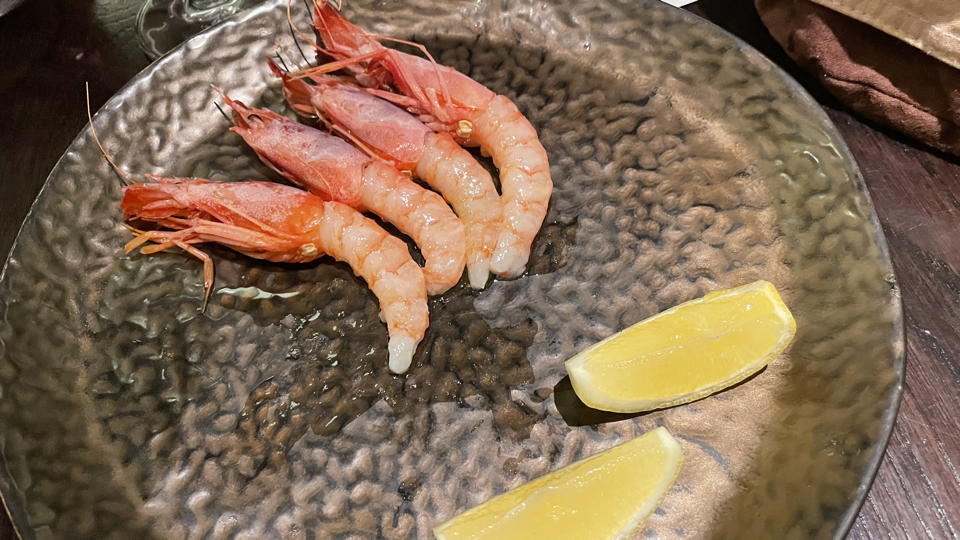 We ordered three “snacks” to begin. The half-dozen Maldon rock oysters come from my home county of Essex, famous for its salt but also a dab hand at bivalves. These were fresh and quite subtle in flavour, less saline than others I have recently eaten, the Chardonnay-pickled shallots adding a welcome tang. The Sicilian prawns with crudo, lemon oil & Maldon sea salt were succulent and sweet, though my favourite was the Cantabrian anchovies that delivered potent salinity, almost overwhelming the superb sourdough & seaweed butter. 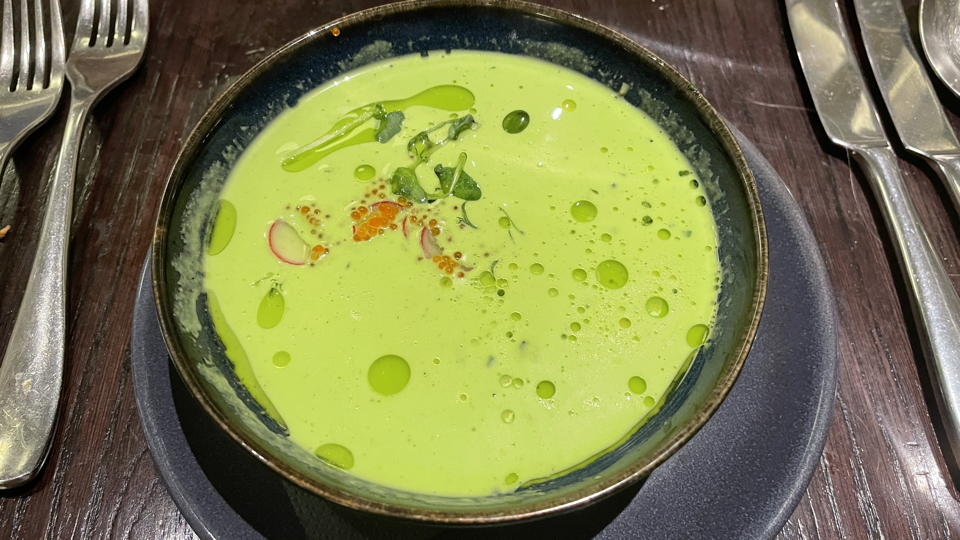 Pea soup with langoustines and samphire.

For a starter, I chose pea soup with langoustines and samphire. This was outstanding, a brilliant dish, perfectly seasoned, packed full of flavour, the langoustine moist and sweet. This soup was so fresh and not too heavy, perfect for a warm July evening. This is up there with my favourite starters of the year. 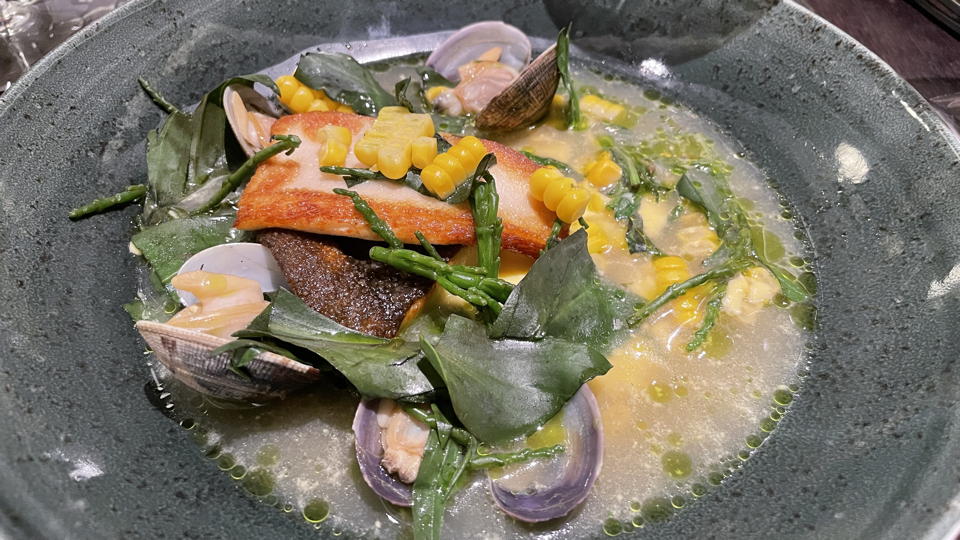 The pan-fried Cornish plaice came with nuggets of sweet corn, langoustine consommé and fresh clams. The fish was perfectly cooked with a crispy skin and flaky flesh, the clams full of flavour (in fact, I could have done with more) and the consommé so delicious that I spent a couple of minutes scraping the bowl with my spoon.

The 700-strong wine list is centred around Burgundy, and it is stupendous - easily one of the best in the capital. Pages of Burgundy are listed by Village AC with more older vintages than you will find elsewhere. (Some of La Cabotte’s backers are notable Burgundy collectors who list parts of their personal collection.) The list does broaden out to other regions, astutely chosen as you would guess with two MS’s at the helm, yet Burgundy is the calling card. 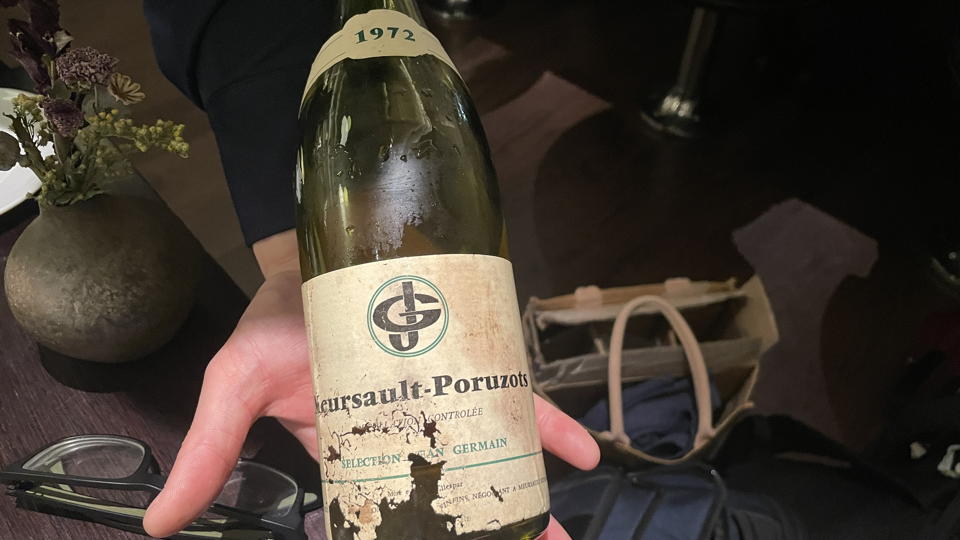 On this occasion, we brought our own wines and ordered one from the list. We commenced in style with an utterly sublime 1972 Meursault Les Poruzots 1er Cru from Sélection Jean Germain. Now, this took a bit of investigation because the 0.25-hectare plot was inherited from François Jobard the following year. The label was torn but bore the name “Sélection Jean Germain”. So perhaps Henri bought the fruit in that year before acquiring the plot? Its half-century age is evidenced by its burnished gold colour, though clear and showing no turbidity. The nose is glorious, transmogrifying over an hour, initially backward but developing beautifully with dried honey, candle wax, lanolin and grilled almond aromas. The palate has wonderful weight and density, yet compelling clarity that is only enhanced by aeration. This was one of those magical wines where you could see this Meursault stretching out, gaining concentration, its honeyed texture and subtle spiciness on the finish utterly seductive. Unfortunately the 1985 Montrachet Grand Cru from Domaine des Comtes-Lafon did not meet expectations. Maybe an unrepresentative bottle? I hope so. It felt fatigued and slightly oxidative on both the nose and the palate. I was willing it on, hoping that it would respond to aeration like the 1971 Montrachet in Hong Kong one time. In fact, it seemed to deteriorate, maybe miffed that it was totally outclassed by Germain’s Meursault. Oh well. 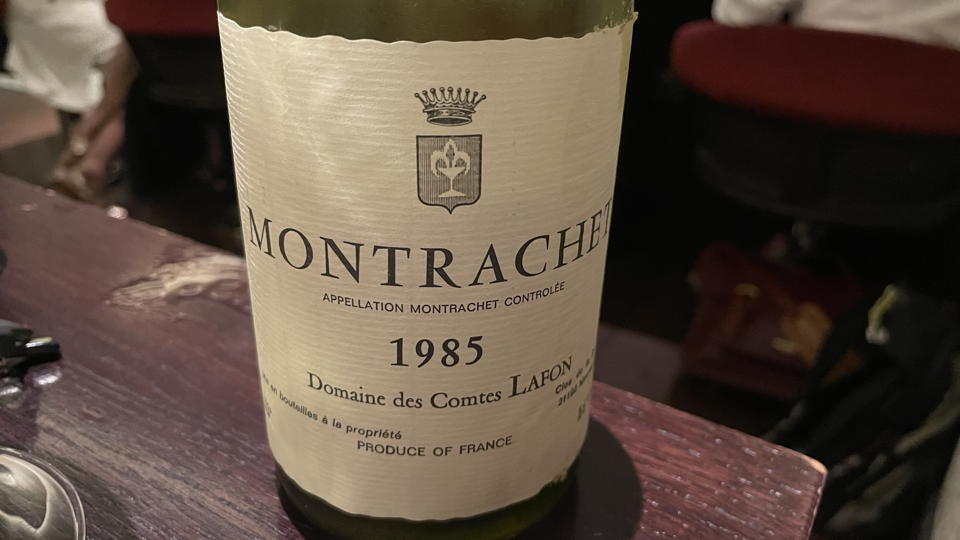 On this occasion, the Meursault showed the Montrachet the art of ageing.

Three reds follow. The 1999 Romanée-Saint-Vivant Grand Cru from Domaine de l’Arlot is ordered from the list. This was made by erstwhile winemaker Jean-Pierre de Smet, who oversaw the running of the de l’Arlot for two decades after it was acquired by AXA in 1987. It delivers a cornucopia of red berry fruit on the nose, complemented by wilted rose petals, light damp loamy scents and a touch of crushed stone. It gains layers by the minute. It comes replete with the fine-boned tannins one expects from this Grand Cru, a bewitching sense of symmetry and a harmonious, satin-textured finish that exerts just the right amount of grip. Probably at its peak, this is a sublime Pinot Noir. (As an aside, the last time I was at La Cabotte was last October for a comprehensive Domaine de l’Arlot tasting with Géraldine Godot – must get that published.)

The 1991 Clos de la Roche Grand Cru from Domaine Hubert Lignier was a bottle that Laurent Lignier himself had given one of the guests to compensate for a corked bottle at a vertical in 2020. This is a glorious Clos de la Roche firing on all cylinders. It was a drastically reduced yield due to hail at flowering, which explains the intense aromatics, black cherries, iris flower and a scintilla of Earl Grey. The 1991 displays brilliant delineation and vigour after three decades. The palate is beautifully balanced with that arching structure that I recall from a couple of bottles drunk when this was around 10 years of age. Fine grip, surfeit with vigour, it has so much swagger on the finish; a Clos de la Roche that stands as one of the Domaine’s crowning achievements. 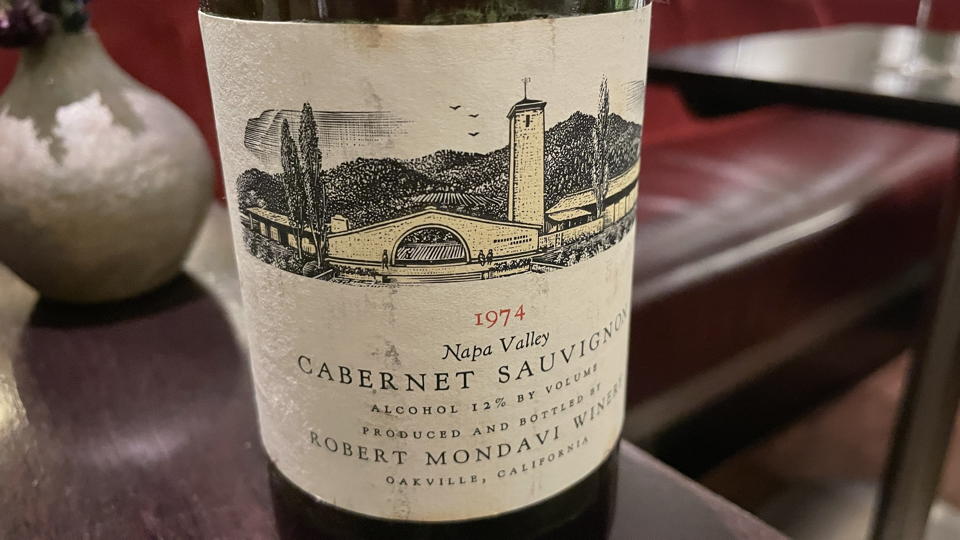 The final wine is one that offered by yours truly. I sought a wine that would deliver the goods since there would be “serious kit” on the table, yet I wanted something off-piste, notwithstanding that these days I can ill-afford bottles of Grand Cru! Back in 2009, I participated in a vertical of Robert Mondavi’s Cabernet Sauvignon Reserve back to the inaugural 1966. Perhaps I should dig out my notes some time. I suspect largely due to Mondavi’s name besmirched by commerciality in recent years, its organiser, Linden Wilkie, found selling tickets difficult.

Firstly, he ended up giving most of the tickets away. Secondly, it was one of the greatest verticals of that era. Thirdly, it was the only occasion when everyone refused to leave the Institute of Directors so that we could finish the bottles.

The fond memories encouraged me to buy a 1974 Cabernet Sauvignon from Robert Mondavi. We’re not even talking about the Reserve here; the regular cuvée was produced in relatively large quantities (50,000 cases odd?). Poured blind to my guests, it delivered…and some. Fresh as a daisy on the nose, it blossoms with black fruit, pencil lead, touches of black truffle and cedar, all beautifully defined, stylistically equidistant between Napa and the Médoc. The palate is perfectly balanced and inspired by Left Bank claret, albeit infinitely superior to anything produced in the Médoc in that dismal season. It is imbued with such freshness and vitality, skipping along as if its 48-years meant absolutely nothing. All this accomplished with a “whopping” 12% alcohol according to the label. Brilliant. 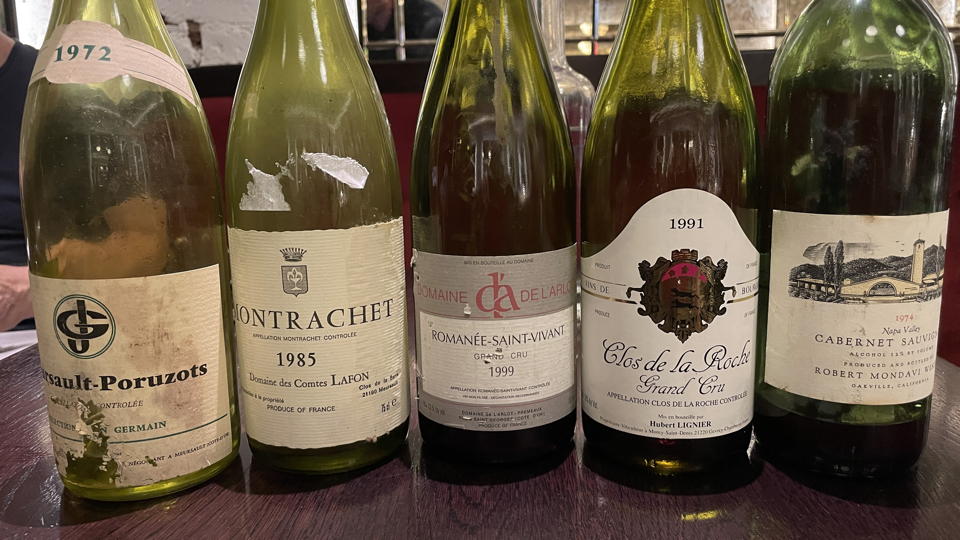 That finished a thoroughly enjoyable evening. A small number of people, a small number of bottles, fantastic cuisine, first-class service and the usual lively cross-table banter – you could not ask for more. Prices are extremely reasonable within the current inflationary climate. If you are a Burgundy lover with time in London, then this restaurant has to be one of your first ports of call. I just hope those stockbrokers and hedge fund managers appreciate the quality of dining on their doorstep. Given that La Cabotte always seems full, I think they do.