Tortellini in capon broth with a ganache of Parmigiano

Pasta with egg and guanciale “Carbonara 2013”

Marzapane is as far removed from classic Roman dining spots such as Armando al Pantheon, Arcangelo, Roscioli or Settembrini as you could imagine. Then again, it has also been the hottest restaurant opening in Rome of the last year and a half. The place enjoyed wonderful word-of-mouth praise when it was still a small, extremely likable neighborhood bistro, but its reputation grew further among food and wine conoscenti following a summer renovation. Owner Mario Sansone (whose wife Sunhee is fast becoming a well known, sought after classic pianist) and his partners also bought out the fastfood place next door, thereby allowing for a few more tables, a necessity given Marzapane's perennially booked status. In other words, should you wish to have dinner here, don’t forget to reserve, and better to do so a week ahead. 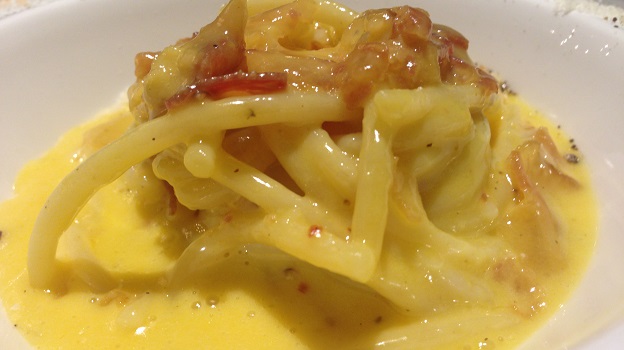 Pasta with egg and guanciale “Carbonara 2013”

And while Marzapane’s Carbonara has been voted the city’s best, one-upping other famous renditions, the restaurant’s cuisine is eclectic by Rome’s standards, and not so recognizably Italian  in scope. Young Alba Esteve Ruiz, recently named Italian emerging chef of the year in 2014, lets her Spanish roots shine through with dishes such as Churrasco with chimichurri and tocinillo de cielo, and many flavor juxtapositions and ingredient combinations not in any way typical of Italy’s many varied cuisines. Still, it all seems to work. 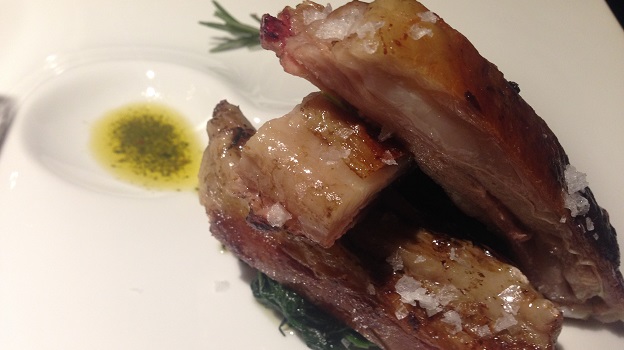 Marzapane’s wine list is also commendable and very well thought out. This may well be the first place in Italy to have two pages devoted just to Italian Rieslings, and another devoted to Rieslings from other countries, a truly great idea given that grape variety’s and wine’s food-friendliness. Spanish wines from interesting producers are also starting to appear, and given the food, it’s probably a good idea; furthermore, such wines are unfindable anywhere else in Italy since Ruiz brings them in directly from Spain. The rest of the wine list is simple and short, characterized by wines by mostly small and at times cultish producers, eschewing most of Italy’s larger estates. 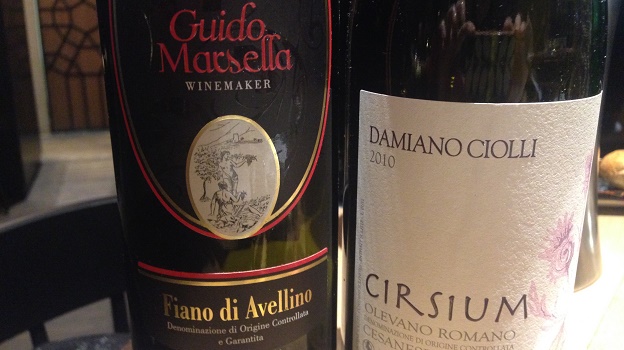 On my night here, I started things off with a spectacular 2007 Guido Marsella Fiano di Avellino. A hot vintage, but the wine is gloriously ripe and rich, with obvious diesel fuel and smoked rubber notes typical of warm climate Fiano. Mercifully, laser-like acidity helps the wine stay focused, providing clarity and welcome cut. It matched heavenly with the red mullet starter and the unbelievably rich, “don’t tell my cardiologist I ate this” Carbonara. Damiano Ciolli is Lazio’s best producer of Cesanese wines: both his entry-level Silene and the top of the line Cirsium bottling (made from roughly 90 year old vines) are standouts. On this day the 2010 Damiano Ciolli Cirsium Cesanese di Olevano Romano, one of Italy’s best kept secrets, impressed me a little less than usual, marked as it was by atypical dark berry and violet aromas and flavors and showing less of the red cherry, sweet spice and creamy, almost Amarone-like richness this wine is known for. Still, it was remarkably pure and clean, and delivered lots of flavor and punch for its low asking price. 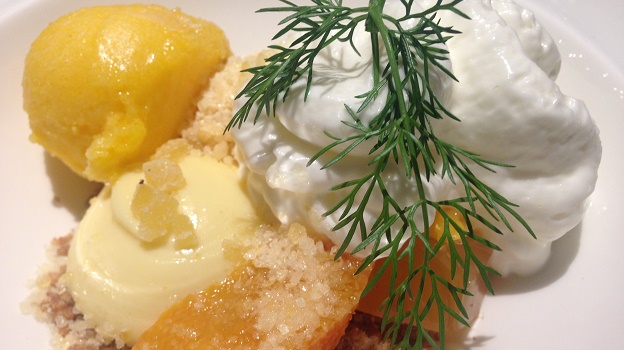 I finished the evening off with Citrus Variations, a new and welcome addition to a much improved dessert list that had, in the past, offered too many rich, heavy sweets and very little in the way of refreshment and lightness. Many foodies and experts alike view Marzapane as one of Rome’s top 15 spots in which to dine. You may find yourself agreeing or not, but it is undoubtedly a great new addition to a city where the food scene is anything but adventurous.