The cheese from our regions (Les fromages de nos regions)

There are restaurants and then there are Restaurants, with a capital “R”: the latter are those that have single handedly written the history of fine food in a specific place, or at the very least, have contributed to the culinary identity of a city or an entire region, if you will, by transcending the eating experience and elevating it to a historical reference point. Examples include Paul Bocuse’s place in Collonges au Mont d’Or, New York’s original Le Cirque (and Le Bernardin today), Ferran Adria’s El Bulli, or Gualtiero Marchesi’s original Milan restaurant at the now mythical address of via Bonvesin de la Riva, where modern Italian cuisine was born. 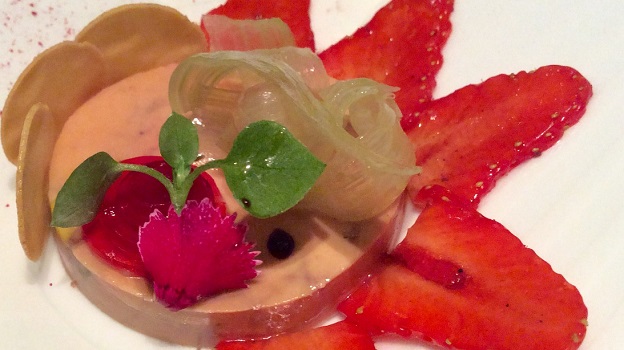 The two Michelin star La Pyramide in Vienne, just a stone’s throw away from the Rhône’s beautiful Côte-Rôtie and Condrieu wine areas, is another such place. For it was long the reign of Fernand Point (1897-1955), arguably the greatest chef of modern France, or at the very least, the father of modern French cuisine. Anyone who cooks anything in France today is, to some extent, indebted to him. Among his many achievements, the book Ma gastronomie, a collection of roughly 200 recipes, reportedly quoted by the likes of Charlie Trotter as “…the most important cookbook”. Point and his restaurant also won three Michelin stars right from the day they were opened (in 1933), and held on to them non-stop until 1986, when his wife, Madò Point, also passed away. Today, the talented Patrick Henriroux mans the stoves and does, by all accounts, a superlative and highly professional job. For example, La Pyramide has just been named one of the five finalists of the “Best hotel restaurant of the year” award along with the likes of the Hôtel Plaza Athénée, the Hôtel Le Bristol in Paris and the Capri Palace Hotel & Spa in Capri. Henriroux is seemingly successful playing away from home as well, having recently also earned one Michelin star at Crown, the restaurant of the Palace Hotel in Tokyo. 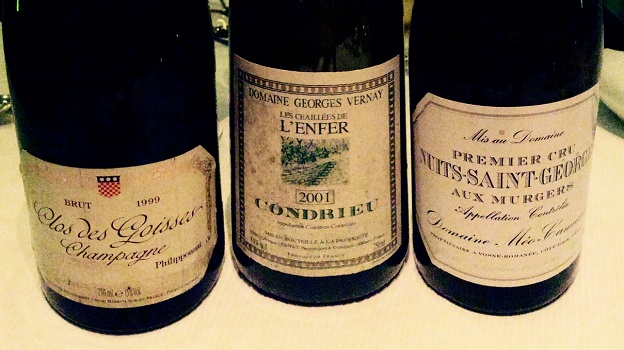 I can’t think of too many better ways to begin a meal than with the glorious 1999 Philipponnat Clos des Goisses, a marvelously perfumed Champagne that is deep, flavorful and chewy. To be sure, not every famous house got 1999 right, but there were no such problems at Philipponnat. The wine has real extract and is quite rich, but is also balanced and vibrant, with an extremely long finish and a juicy, lemony, floral aftertaste that lingers for most of the meal. Nobody produces better Condrieu than the talented Christine Vernay, one of the world’s top winemakers; and though the top of the line Coteau de Vernon Condrieu is justifiably the most famous wine in Domaine Georges Vernay’s portfolio, I find the 2001 Domaine Georges Vernay Condrieu les Chaillées de l’Enfer one of the many vintages of this wine that gives the top dog a run for its money. At 15 years and counting, this magnificent Condrieu is still very much alive and improving, with a memorably rich yet refined texture and highly concentrated aromas and flavors of peach, apricot and white pepper complicated by hints of orange oil and spicy herbs. On this night, its glyceral mouthfeel allowed it to stand up to the foie gras dish quite well. 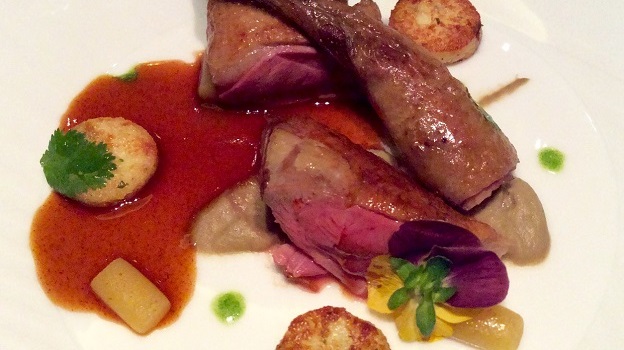 Last but not least, I chose one of the few older red Burgundies on the wine list. If I have just one caveat with La Pyramide is that a dining spot of this repute really should offer a few more older vintages across its otherwise very fine wine list. I am normally a huge fan of Méo-Camuzet’s wines, truly one of the world’s great wine addresses, but it’s likely the 2000 Méo-Camuzet Nuits Saint-Georges Aux Murgers will not be remembered as this venerable estate’s finest hour. Underbrush and spices dominate the slightly fruit-challenged aromas and flavors, while the finish is a little dry, something to which the less than stellar 2000 vintage no doubt contributed to. Happily, the wine did pick up a little sweetness when matched to the juicy, flavorful pigeon dish.

When all is said and done, putting all the awards, quotes and media buzz aside, La Pyramide is one of the best, most professional and smoothly run dining spots in France today, something my most recent visit easily confirmed.