Bresaola with Morels, Favas and Parmigiano-Reggiano

For twenty three seasons Rusty Staub enjoyed a stellar career as one of the most elite players in professional baseball. Since retiring from sports, Staub has focused on a number of other endeavors, including the Rusty Staub Foundation, which supports food pantries for low-income families in the greater New York area. This fundraising dinner, held at David Bouley’s Test Kitchen to benefit the Foundation, featured the cooking of Chefs José Andrés, Mario Batali and David Bouley himself paired with a breathtaking range of wines.

Staub is most often associated with the New York Mets, where he was a fan favorite during two stints in the 1970s and 1980s, but he caught the wine bug while playing for the Montreal Expos during their first season as a Major League Baseball franchise. “I got introduced to wine by a bunch of the guys in Montreal.” says Staub “In those days, it was Bordeaux. Wine was cheap, and I started buying heavily.” Today, Staub’s interest leans much more heavily towards Burgundy, where I often run into him before or after one of my tastings. On this night, the wine choices are varied, with plenty of highlights from Burgundy, Bordeaux, the Rhône, Champagne and Ribera del Duero. 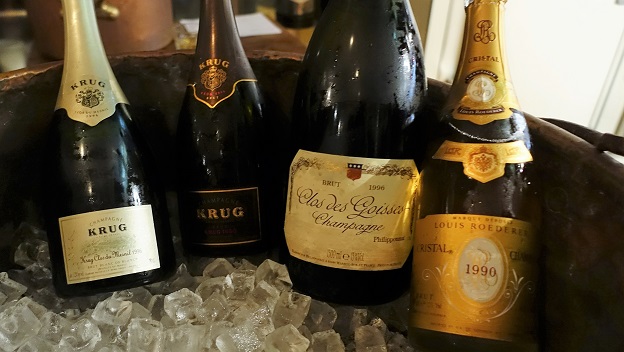 Before dinner starts, though, a breathtaking array of Champagnes greets guests as they enter the Test Kitchen, one of the most intimate spaces in New York. I am drawn to Krug’s 1996 Clos du Mesnil, which is one of the greatest Champagnes I have ever tasted. It is utterly magnificent, as always. The hustle and bustle of New York City below starts to fade. Next up is Philipponnat’s 1996 Clos de Goisses. Tasted from magnum, the 1996 is remarkably fresh, vibrant and powerful. This is a great bottle. Sadly, the same can’t be said for the 1996 Krug, which is a bit more forward and oxidative than it usually is. The 1990 Cristal is in a perfect spot, where the aromas and flavors have developed lovely complexity, while the contours have softened, making it an excellent choice for drinking now and over the next decade or so. 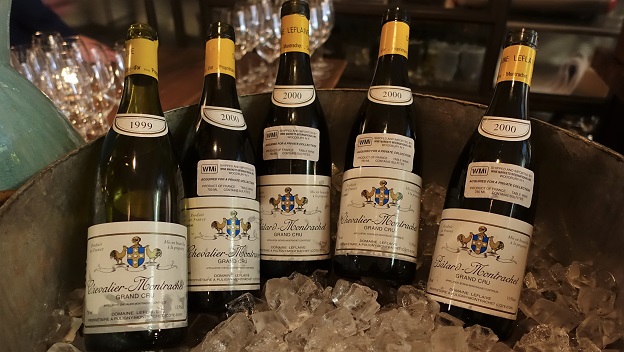 Three wines from Domaine Leflaive are all in terrific shape. The 1999 Chevalier-Montrachet has an almost phenolic intensity to it, with plenty of almond and honey notes woven throughout. This is an especially powerful Chevalier, but I also get an impression that the freshness is starting to fade, so the 1999 is probably best enjoyed sooner rather than later. The 2000 Chevalier-Montrachet is quite a bit brighter and fresher than the 1999 tasted just prior. Here the flavors are bright, precise and lifted. Orchard fruit, slate, smoke, citrus and white flowers are all beautifully delineated, with perfumed, mineral notes that ring out on the finish. A big, voluptuous Burgundy, the 2000 Bâtard-Montrachet captures all of the personality of this site in its large-scaled frame and pure density. All of that energy is focused inward, though, as the Bâtard is not at all showy, but rather a wine of structure. The 2000 still has a lot to say. 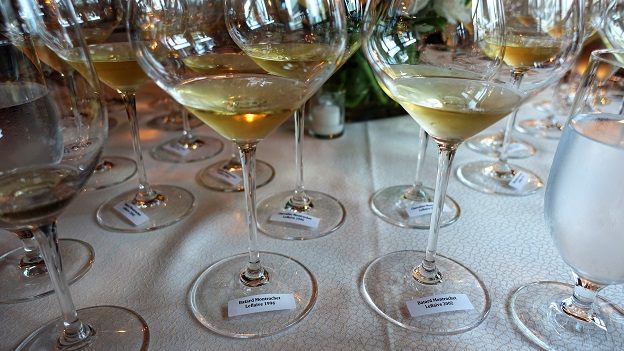 A selection of seven Lafites follows. The 1950 is fully resolved, with pretty hints of mint, crushed flowers and sweet red berry that are laced throughout. A much racier wine, the 1934 is deep, complex and nuanced, especially for a wine of its age. Barnyard and game notes are at the limit, but all the elements are nicely balanced just the same in this mature but showy Lafite. The 1914, 1909, 1905, 1904 and 1901 are all past the point where I personally find pleasure in wine. I have a slight preference for the 1904, which is really quite pretty, as is the 1905. 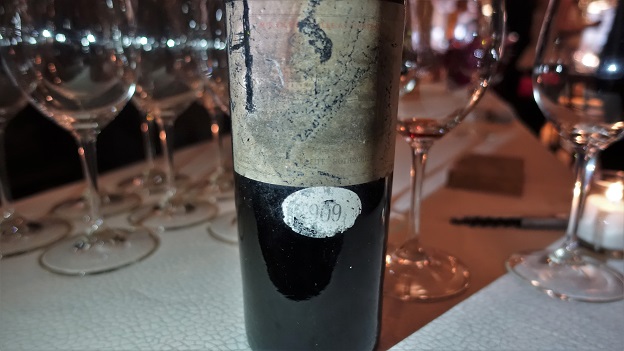 Four beautiful wines from Leflaive are poured with the first course; a side-by-side comparison of the Chevalier and Bâtard across vintages 1996 and 2002. The 1996 Chevalier opens with a classic Leflaive bouquet heavy on reduction. Powerful and intense, the 1996 develops beautifully with time in the glass while retaining all of its essential qualities. A host of lime, lemon and white flowers linger on the long, expressive finish. The 2002 Chevalier is much more forward, honeyed and viscous, almost unnaturally so. I suspect a less than perfect bottle. The 1996 Bâtard-Montrachet is a real showstopper. Powerful, incisive and salivating, the 1996 possesses stunning clarity and precision for such a big, rich wine. I very much like the sense of energy here. Leflaive’s 2002 Bâtard rounds out this flight in grand style. Seamless, opulent and totally voluptuous, the 2002 is impossible to resist. Layers of flavor build in the glass as this flamboyant Burgundy dazzles all the senses. This is a great showing from the 2002. Wow! On this night, it is absolutely gorgeous. Mario Batali’s Bresaola with Morels, Favas and Parmigiano-Reggiano is a delicious, early spring dish. 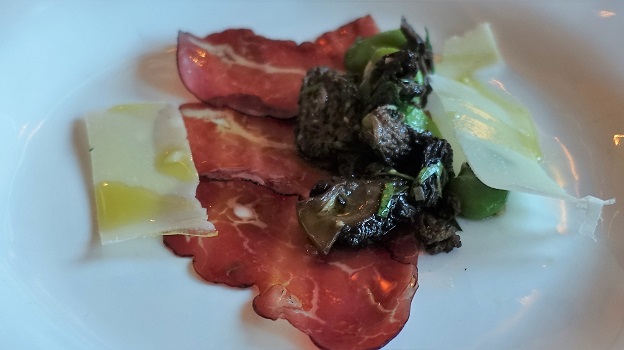 Bresaola with Morels, Favas and Parmigiano-Reggiano

Vega-Sicilia’s 1990 Unico (magnum) is off the charts. Powerful yet also sensual, the 1990 impresses for its depth and allure. A host of dark red cherry, plum and smoke nuances support the veins of underlying acidity that give the wine its freshness and tension, while the explosive finish leaves everyone speechless. Until the 1982 is poured, that is. Even better than the 1990, the 1982 Unico is one of the very best wines I have tasted in some time. Powerful, fleshy and full of energy, the 1982 Unico is another wine that is almost overwhelmingly beautiful. A striking mélange of savory herbs, smoke and tobacco add complexity, but the 1982 is about the total package. And the 1982 has it all going on. In a word: Magnificent. 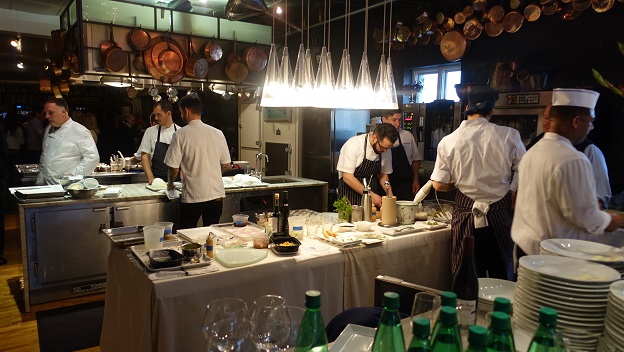 José Andrés and his team

The 1975 Unico (magnum) is a bit forward, especially in its aromatics, but not at all unpleasant in this context, given how youthful the 1982 and 1990 are. Still holding on to considerable depth in its fruit, the 1975 offers up an intriguing array of black cherry, plum, smoke and molasses. The 1970 is the most subtle of these Unicos, although I have tasted fresher examples. Delicate and perfumed throughout, the 1970 is laced with the essence of crushed flowers, mint, tobacco, dried cherries and mint. Mario Batali’s goat cheese agnolotti with sugo finto are tasty, but I don’t get the small portions, especially when there is this much wine on the table. 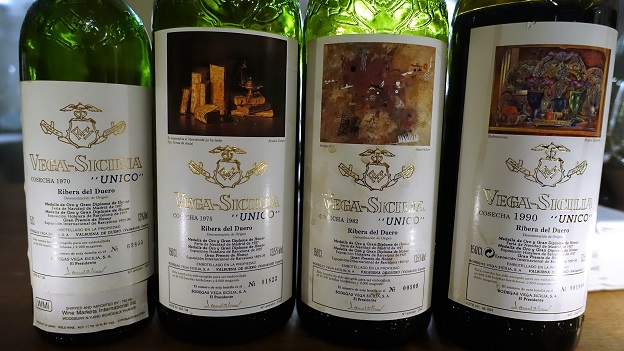 Our attention turns to Burgundy. Leroy’s 1959 Grands-Échézeaux is sensual, perfumed and totally inviting. The wine’s eternal finish and striking inner sweetness are simply impossible to resist. This is a great bottle. The 1993 Chambertin from Rousseau is raw and powerful, as the wines from this vintage still are. I must confess I am not a huge fan of 3-liter bottles, as they are almost always bottled by hand and therefore more variable. The 1993 Chambertin from a standard 750ml bottle is more compelling. The rabbit paella and porcini, with its interplay of flavors and textures, is magnificent with the Burgundies.

Sadly, it is not a great night for Bordeaux. The 1982 Pichon-Lalande, served from 5-liter, is controversial, but in my view it is corked. I have had highly variable experiences with the 1982 just in the last few months. Some bottles are utterly sublime, others far from it. The 1982 Léoville Las Cases is powerful but also incredibly compact, with little appeal or mid-palate depth. This is very stubborn wine, even within the context of Las Cases. The 1982 Mouton Rothschild also comes across as muted and lacking in expression. Time in the glass is of no help. This is perplexing showing. Only the 1982 Latour is its usual stellar self. Rich, deep and explosive, the 1982 possesses magnificent concentration as well as enough energy to drink well for many years to come. 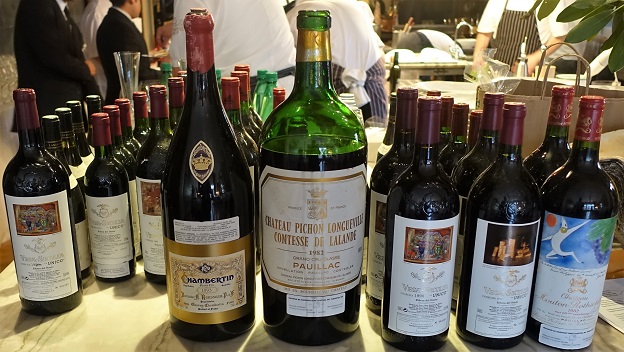 A collection of stunning older northern Rhônes puts a strong exclamation point on this night of fabulous food, wine and conversation. The 1978 La Chapelle from Jaboulet is full of deep, woodsy aromas and flavors. Still, deep, rich and positively explosive in the glass, the 1978 is a real treat to taste and drink. Guigal’s 1985 Côte-Rôtie La Landonne is thick and sweet in the glass, with plenty of power and overall intensity. Although the fruit is super-ripe and voluptuous, there isn’t quite enough richness to stand up to all the oak, which leads to a feeling of slight dryness on the finish. The 1985 Côte-Rôtie La Mouline has far better balance. One of the wines of the night, the Mouline is dark, sensual and breathtakingly beautiful. Layers of dark fruit intermingled with scents of tobacco, licorice, plum, black cherry and incense blossom into the voluptuous, exotic finish. At thirty years of age, the 1985 is a real stunner.

A bottle of Rousseau’s 1993 Chambertin-Clos de Bèze appears from out of nowhere. Tasted against the Chambertin, the Bèze has more power, intensity and freshness. I have always adored the 1993. This bottle is exceptional. 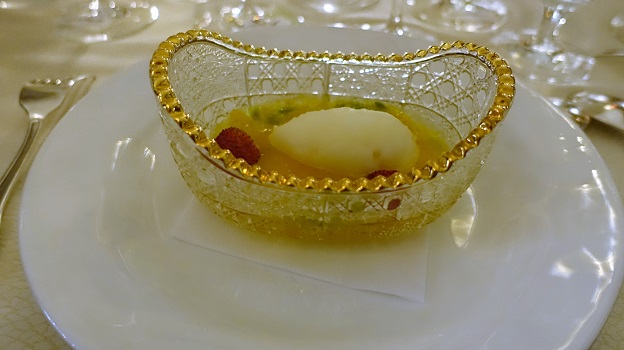 At this point in the evening, the focus on food has perhaps waned a bit, but not enough to realize that both of David Bouley’s desserts are fabulous. In my experience, it is rare that dessert can further elevate a great meal. That is very much the case here.

With that, another superb night of food and wine at the Test Kitchen draws to a close. A bevy of dessert wines awaits, including an eye-popping selection of Chateau d’Yquems back to the 1960s. As great as those wines can be, I really don’t want anything to compete with the fabulous whites and reds we have just enjoyed. The evening is full of highlights, but the Vega Sicilia Unicos in particular prove to be truly memorable.