La Matricianella has been open for business since 1957, and seemingly, only “good business” at that. The place is always packed, lunch and dinner. It never ceases to amaze me just how crammed full of people the restaurant’s three smallish rooms can be. Reserving your table isn’t just recommended, it is essential. 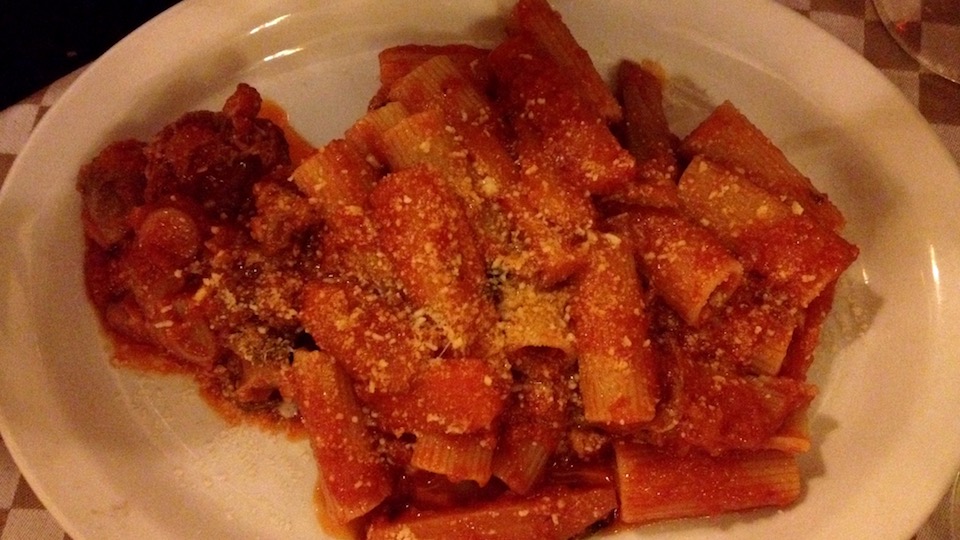 The brother and sister team, Grazia and Giacomo Lo Bianco, have created a jewel, neatly tucked away on a small street a stone’s throw away from piazza San Lorenzo in Lucina, a very pretty, pedestrian-only square in the middle of the city’s historic center. La Matricianella is one of Rome’s three best addresses at which to try authentic Roman cuisine. The three chefs who man the stoves (Giovanni Fabbrotti, Lorenzo Vannucchi, and Stefano Timi), rarely have bad days that might leave you disappointed. The professional, no nonsense waiters are just as an important part of the restaurant’s success. For example, Giovanni Felici, who has waited on me for something like 80% of the times I have been at Matricianella in my lifetime (which is a lot of times) is as much of a fixture here as are the gingham check tablecloths, the rather tightly spaced tables (frankly, too tightly), the old photographs on the walls, and the reassuring menu full of old reliables (in fact, La Matricianella also has an outside narrow seating area; so, weather permitting, one can choose to sit outside in just as cramped quarters as on the inside). 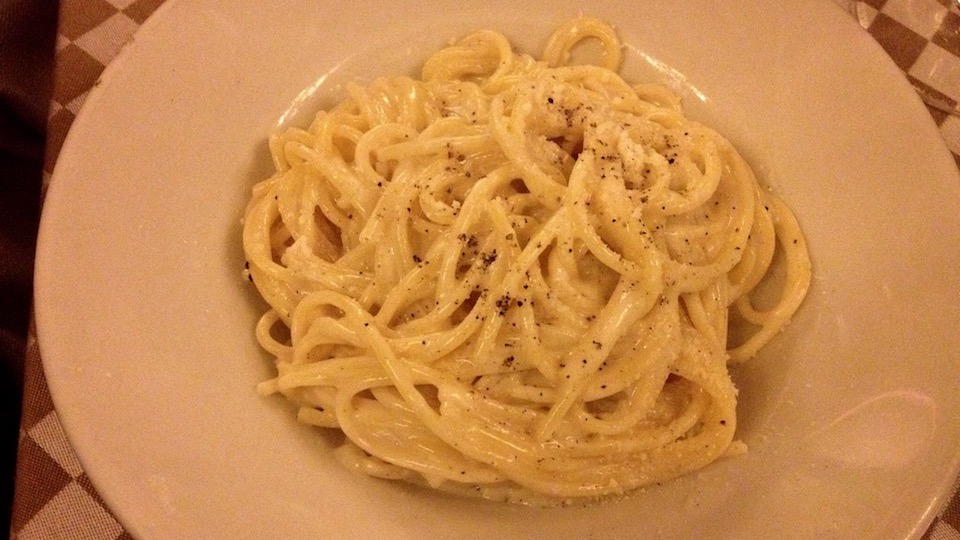 Traditions and charming habits harkening to bygone days happily persist, like eating specific dishes on set days. For example, the quinto quarto (fifth quarter) on Wednesdays, gnocchi on Thursdays, baccalà on Fridays and tripe on Saturdays. In fact, the quinto quarto dishes are available all the time at Matricianella. The term quinto quarto refers to those poor meat cuts or animal parts, like sweetbreads, tripe and oxtail, that Rome’s richer patrician families, Popes and princes never bothered to eat, cuts that were effectively non-existent for supposedly refined palates for whom money was no object. Hence the ‘fifth quarter’ namesake: clearly, there is no fifth quarter, it doesn’t exist, just as it didn’t ‘exist’ for the wealthy. Nevertheless, Rome’s poor learned to cook these lowly, underappreciated ingredients in ingenious, delicious ways, and we are all luckier for it. 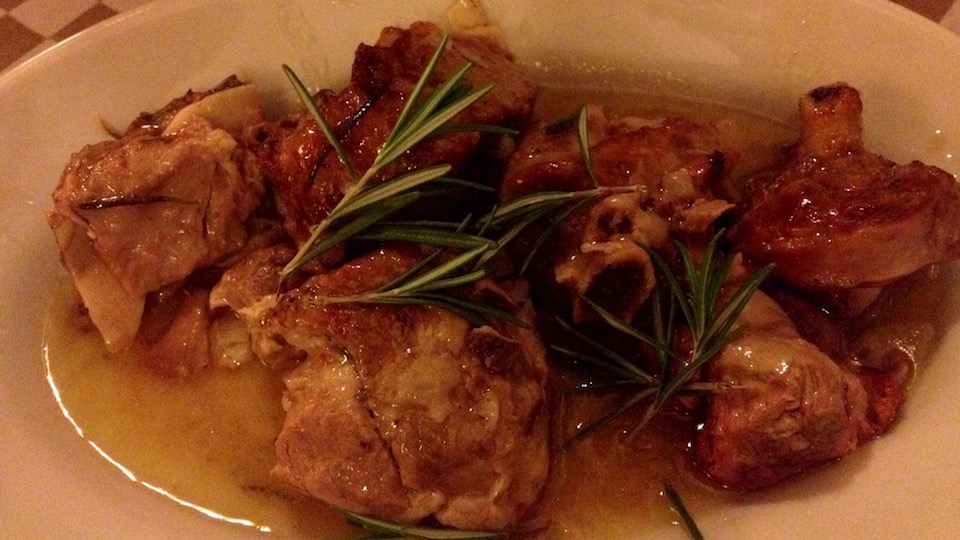 The food at La Matricianella is outstanding. Foodies know that some of Rome’s best fritti are to be had here. The pastas are excellent too: of Rome’s holy trinity of pasta - amatriciana, carbonara and cacio e pepe - my vote for Matricianella’s best goes to the first of that trio (but as good as they are, none can claim the title of Rome’s best). Visitors must not miss out on Matricianella’s artichoke preparations (both the deep-fried carciofi alla Giudea and the pennyroyal-accented carciofi alla romana are amongst the finest the city has to offer) and the many abbacchio dishes (abbacchio is suckling lamb that had never touched a blade of grass before reaching the big pasture in the sky) that are Roman staples. On this night, my abbacchio alla cacciatora is splendid (though I always come away thinking this dish could use a drop or two more of white vinegar), the abbacchio scottadito (grilled lamb ribs) absolutely perfect (moist and crisp) and the melt in your mouth abbacchio al forno is exactly what every oven-baked lamb ought to be like. 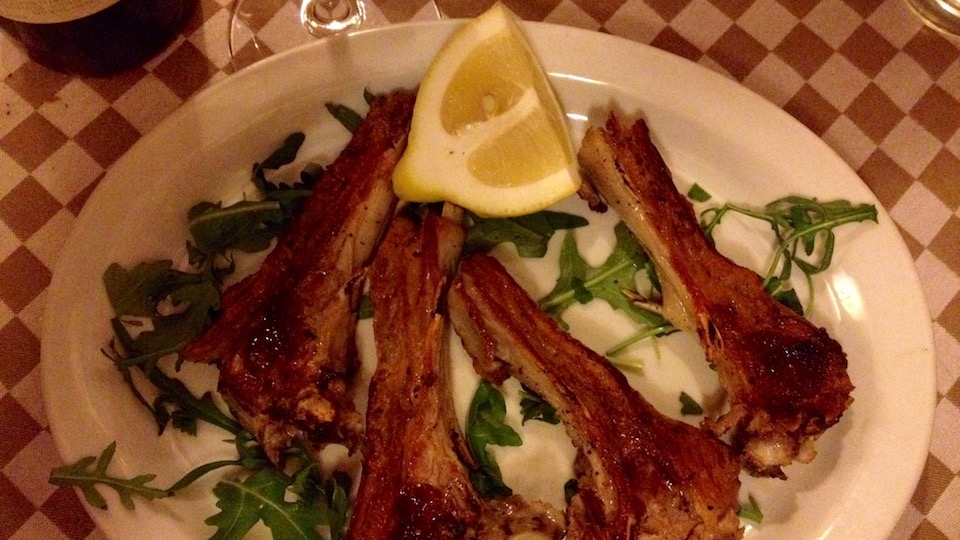 La Matricianella boasts not one but two wine lists: the first, a normal-sized intelligently designed list dedicated only to the little known but at times surprisingly good wines of Lazio, and a second, truly heavy, monumental tome filled with the names of Italy’s best whites and reds. As always in Italy, older vintages are few and far between (by this standard alone, roughly 60% of Italy’s two and three Michelin star restaurants should each be demoted by at least one star) but there’s not too many ways around this, as Italians like to drink their wines on the young side and storage space in all too cramped Italy is scarce. At least at Matricianella you have a good number of choices of all the usual suspects (Barolo, Brunello, Amarone) going back to the 90s. 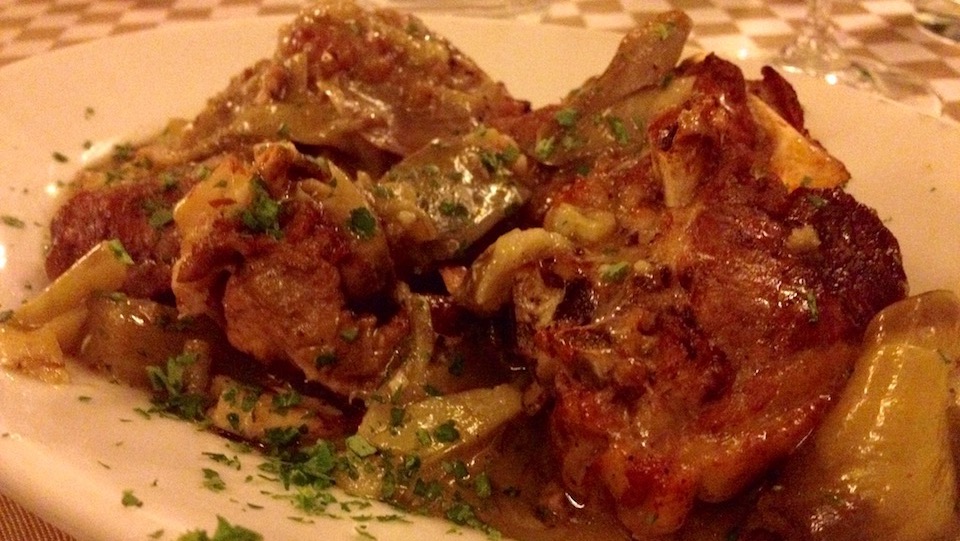 This night out, I passed on wine and food matching altogether, wanting to just have fun with some older, by-now ready to drink wines. I have had the 1999 Roberto Voerzio Barolo La Serra countless times over the years, and have always felt it was one of his most successful 1999s, which for my taste were initially too chunky and ripe, and short on nuance. However, this La Serra appears to be finally emerging from its opulent persona, showing greater finesse than it did in the past, and offering nuances of faded violets, tar and red cherry, with La Serra’s typically assertive tannins providing welcome backbone. And though an initial strong note of reduction diminishes but doesn’t really dissipate completely even by dinner’s end (three hours later), overall I’d say this is the best showing of this wine I have memory of. 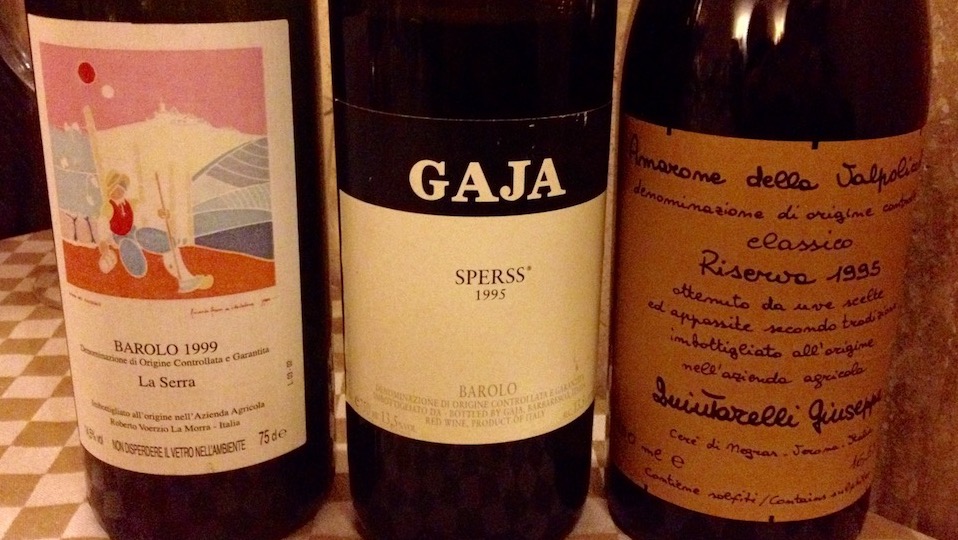 The 1995 Gaja Barolo Sperss is more graceful but less powerful than the La Serra, offering a dainty mouthfeel and noteworthy grace, if not mindboggling concentration of its sour red cherry and berry aromas and flavors. Vibrant acidity makes this an excellent food wine, though. The winner of the night turned out to be the amazing 1995 Quintarelli Amarone della Valpolicella Riserva, a remarkably balanced, harmonious, completely dry red characterized by subtle air-dried red fruit and sweet spice notes and extremely suave, noble tannins. It is completely devoid of funky notes or volatile acidity and lingers on the palate for hours; it’s about as beautiful an Amarone as I have drunk in a very long time. This big wine (16.5% alcohol) is at once powerful yet light on its feet, and how this brooding giant manages such a neat trick is a testament to the incredible talent of Giuseppe Quintarelli. It’s also a wine that showcases just how great classically dry reds made with air-dried grapes can be when in the hands of a true master.