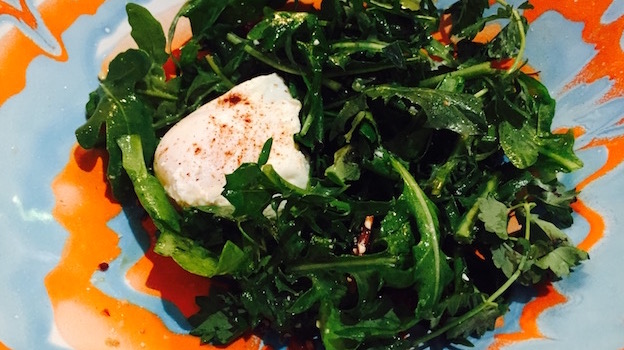 If asked what I think is Rome’s best overall restaurant, I have no difficulty in answering “L’Arcangelo”. Simply put, the restaurant is as close as to a “sure bet” in the world of fine dining as there is.

L’Arcangelo is an upscale trattoria, with an old bistro or brasserie-like interior, but also high-level stemware and a very good wine list. The food revisits old Italian and especially Roman cuisine classics, by adding intelligent twists here and there. Even without those twists, the Carbonara and Amatriciana pastas are amongst the four or five best in Rome (along with those of all the usual suspects, from Roscioli, to Marzapane, to Armando al Pantheon). And when it comes to the supplìs (a typical Rome street food of fried battered rice and meat sauce), there is no such diatribe, as everyone recognizes L’Arcangelo’s as the best in Rome. That said, a dessert, the bignés, are also one of the ten best sweet dishes you are likely to eat anywhere in Rome. 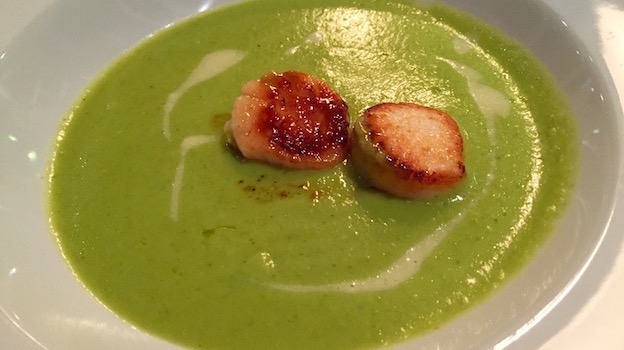 Owners Arcangelo Dandini and Stefania Sammartino (he’s the chef, she’s in charge of the wine list) have been plying their trade for close to thirty years now, and that experience shows. Dandini, who was born into a family of restaurateurs (his great-great grandmother owned a trattoria in Rome already in the 1800s) trained at Michelin starred stops such as Milan’s Aimo e Nadia and Gualtiero Marchesi, two of Italy’s perennially best restaurants. Most importantly, Dandini has never stopped experimenting and searching out uniquely high quality ingredients, so all you eat at L’Arcangelo starts off light years ahead of most other restaurant fare in Rome (and Italy for that matter) because the ingredients are just top notch. Stefania has greatly improved the wine list, moving it from a collection of a few but rather idiosyncratically picked bottles to a well thought out if not especially large tome with something for everyone, including many small Italian producers of real note, fine Burgundies and German Rieslings. The compact section of old vintages to try is a thoughtful touch, and a rarity in most Italian eating establishments. 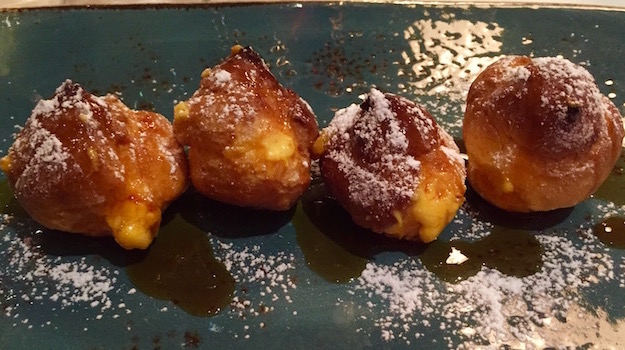 While normally I would indulge in the Supplizio to start my meal off (the dish is made up of one supplì and one crocchetta di patate (gently fried smoked pecorino and potato purée), a must-try dish for anyone going to L’Arcangelo for the first time; on this night I aimed for the lighter fare on the menu. The Viaggio a Rocca Priora: uovo in camicia, spezie, polline e erbe amare is a throwback to the slightly hearty breakfasts of the poor families in Lazio’s towns such as Rocca Priora (where Dandini’s family had moved to briefly after having plied their trade in Rome). It’s a very successful mix of bitter field green sweetened by the egg yolk, though on this evening I think my poached egg was a little overcooked. The minestra tiepida di ortaggi, aglio al bacio e capesante is a lukewarm green gazpacho-like soup that offers lovely balance and concentration of flavors. The best dish of the night is the seppie, succo di pesca, incendio di alloro e sambuco, with judiciously parsed ingredients so the whole is better than the individual parts; combining peaches and squid is very “in” these days, at least here in Italy (you’ll find a version of this dish in most seafood restaurants in Italy, from Sardinia to Marche) but at L’Arcangelo the peach presence doesn’t overpower the delicate flavors of the squid. 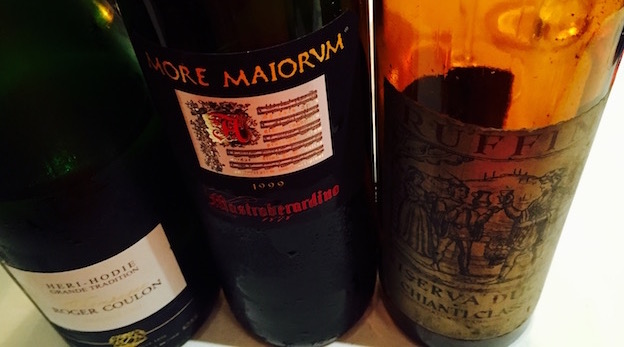 The NV Roger Coulon Brut Herie-Hodie Grande Tradition is an outstanding way to begin a meal, as Isabelle and Eric Coulon’s Brut from Vrigny (in the Montagne de Reims sector of Champagne) is delightfully easy-going and fresh, but precise and very pure at the same time, and gets you ready to enjoy your dinner like many other wines won’t. Its notes of spicy pear and apricot speak of the Pinot Meunier (50%) in the blend (the rest being equal portions of Chardonnay and Pinot Noir). Next up was the 1999 Mastroberardino Fiano di Avellino More Maiorum, a wine that starts out well, flinty and ripe but with initially still fresh orchard fruit aromas and flavors, but quickly tires in the glass becoming slightly chunky and one dimensional. The 2002 Mastroberardino Fiano di Avellino library release, another old vintage from Mastroberardino you are likely to find on restaurant lists these days, is a much superior wine. Last but not least 1962 Ruffino Chianti Classico Riserva Ducale Serie Oro is a smashing wine, still beautifully alive and vibrant, with sour red berries, licorice and aromatic herb aromas and flavors just jumping out the glass. It’s a beautiful example of just how great well kept Chianti Classicos from the 1960s can be, and a testament to just how well these wines can age (so much for the misguided belief that including white grapes in the blend would have precluded age worthiness). It is a vastly superior wine to the inky, herbal Chianti Classico wines made by Ruffino in the late 90s and early part of the new century in which the Sangiovese is completely overpowered by other more dominant varieties.

A bustling but not excessively noisy and homey interior packed nightly with locals and regulars, excellent food and interesting wines, L’Arcangelo isn’t tragically hip, and hence is not on the radar of food fashionistas always on the lookout for the latest flavor of the month. So hipper than hip and ultra-cool is what it’s not: what it is instead, is one of Rome’s best restaurants, and a must-stop for lunch or dinner when next in the Eternal City.