Cucumber and huacatay, fermented and raw

This belated birthday dinner at Mãos is in pole position for my best meal of 2019. Brilliant, inventive cooking and a totally engaging vibe make Mãos an absolutely fantastic dining experience. Let's just say it was well worth the wait... 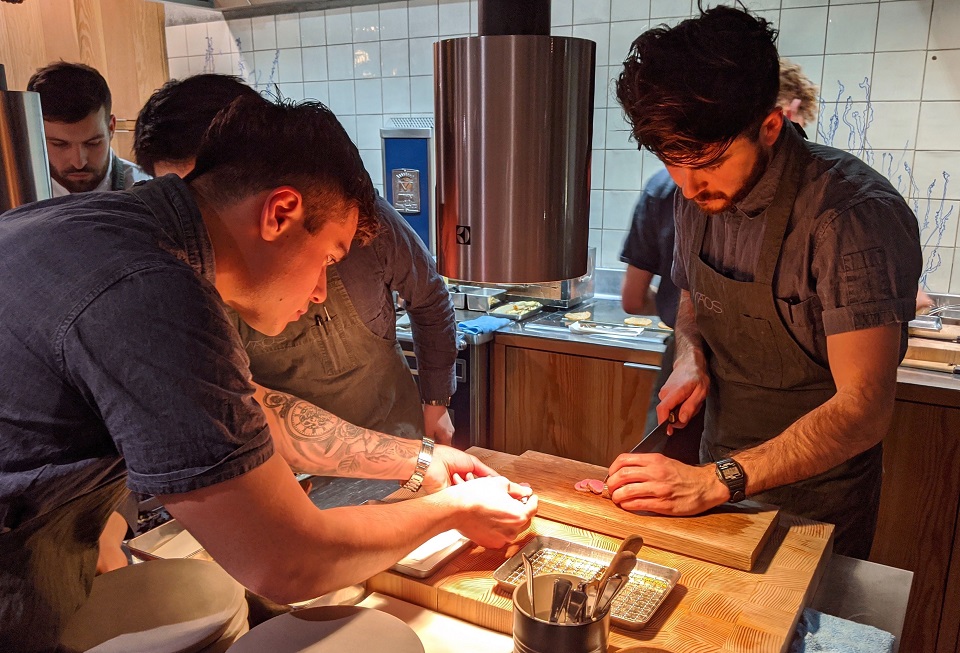 Renowned chef Nuno Gomes and creative visionary James Brown opened Mãos about a year and a half ago in Shoreditch, one of the hottest neighborhood’s in London’s East End. Mãos (the name translates to ‘hands’ in Portuguese) occupies the top floor of the Blue Mountain School, which houses a combination of galleries, fashion boutiques and listening/viewing spaces that share a focus on artisan craftsmanship. Gomes recruited the super-talented Edoardo Pellicano, formerly of Viajante and Chiltern Lighthouse, to be his Executive Chef. Pellicano, of Singaporean and Italian descent, runs the kitchen with a mix of passion, youthful energy and warmth that is the heart and soul of what makes Mãos so special. 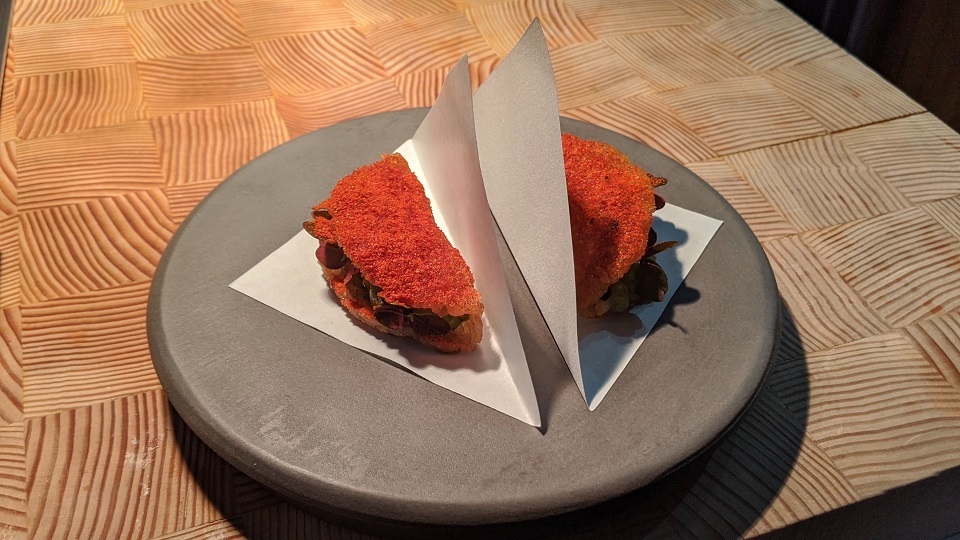 Mãos is designed around three interconnected spaces. Glass doors open into the very clean, minimalist kitchen. The dining room, with a rectangular communal table set for 16, is equally Spartan in its aesthetic. A cozy wine room holds a small but carefully chosen selection of bottles. Guests are encouraged to explore all three rooms at their leisure over the course of the meal. In this setting, with the open kitchen and single table, guests become participants in the overall dining experience. I confess we spent most of the evening in the kitchen, and I would I have happily spent the entire night there, but I did not want to be rude to my fellow diners. 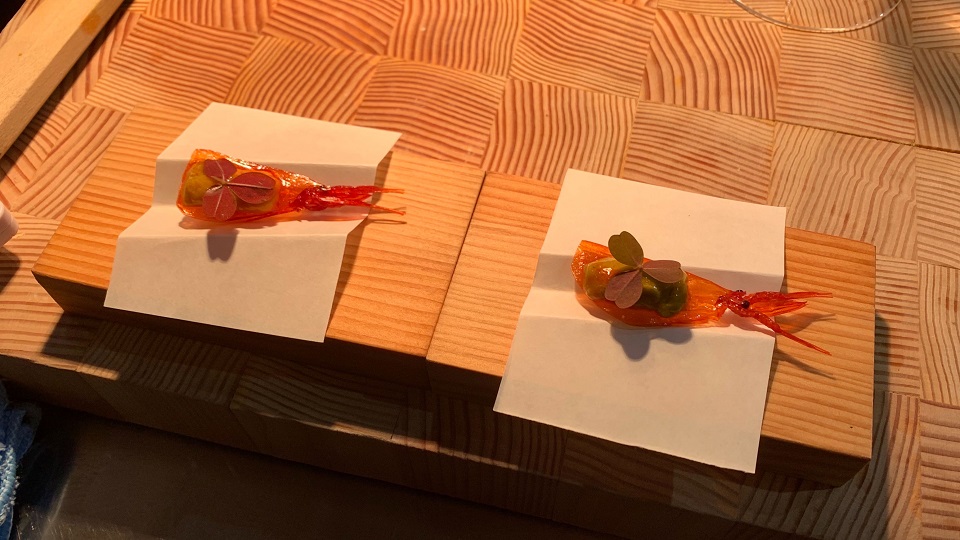 Crispy prawn head, a morsel of pure deliciousness enjoyed in the kitchen

Dinner consists of a single tasting menu, which is prepared for the entire table. Pellicano and his chefs take turns presenting and explaining each course in great detail. Their extraordinary passion for concepts, ingredients and techniques adds immeasurably to the experience. If you want to know about fermentation approaches or how certain meats are aged, this is the place to ask all your culinary geeky questions. General Manager and Beverage Director Alex Casey and Guest Experience Manager Sarah Papadimitriou take care of wine and hospitality with same level of grace. They are always present, but never intrusive. The wine list at Mãos is small, but well chosen, with a nice mix of classics and more eclectic, tiny production wines, many of them in the 'natural' vein. More on that below. It’s a much better selection today than what I saw a year ago. Guests can bring up to two bottles with a £40 per bottle corkage fee, which is certainly reasonable in my view. 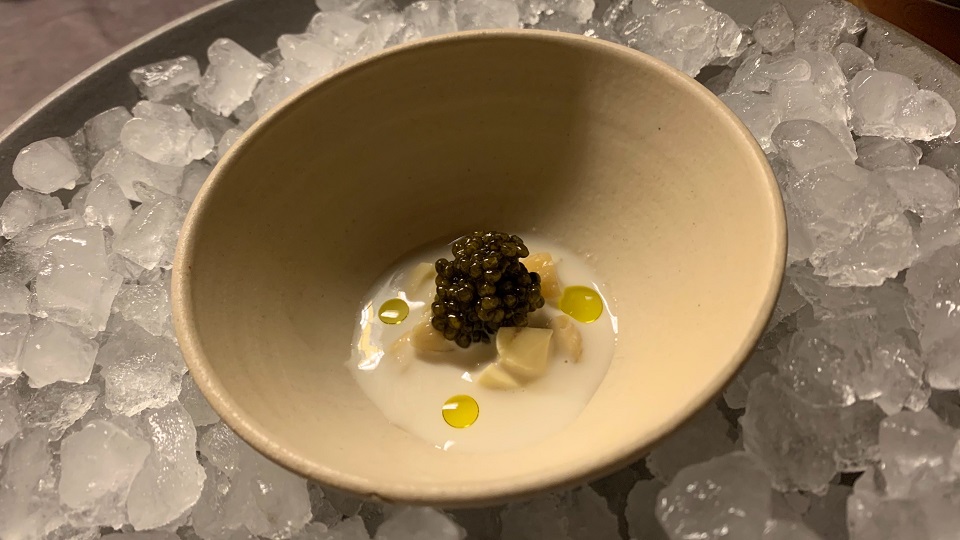 This menu was full of highlights. I won't comment on every single course, but rather focus on a few that were mind-blowingly brilliant. Generally, Pellicano's cooking distills the essence of just a few ingredients and then combines them, often in very unusual ways. There is plenty of complexity and technique, but it is never obvious. The toasted rice with red prawn and citrus, presented as a sort of crispy taco, is a delicious early course. Raw chestnuts in rice koji water and dried chestnut milk, topped with Schrenckii caviar and drizzles of rice koji oil presents a stunning interplay of textures and flavors. What a dish. I love the crispy prawn head. For this course, Pellicano freezes the prawn heads and takes the brains out whole. He then fries the paper-thin heads and serves the brains on top. It's perfect finger food in the kitchen, not to mention fabulous with Comte Lafon’s Meursault Charmes. 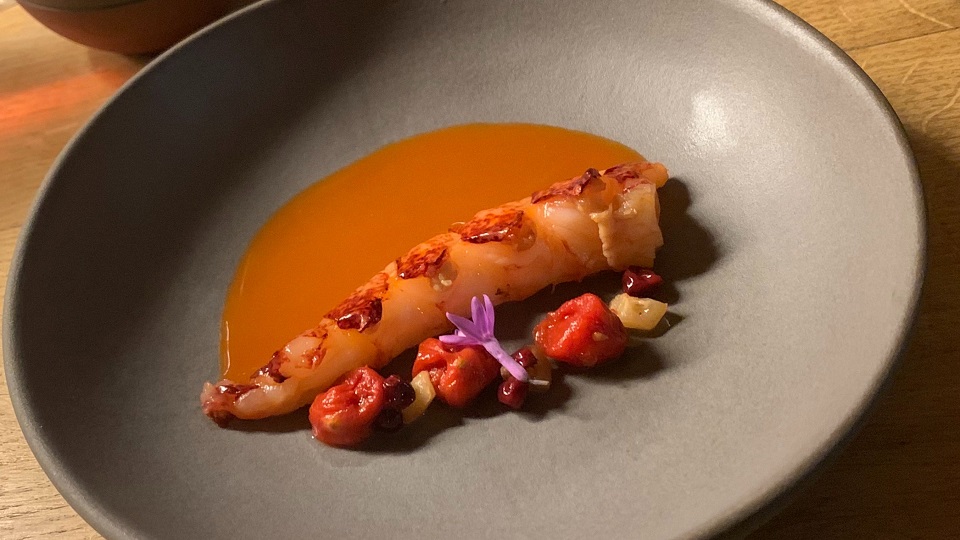 Speaking of wines, our bottles are a bit hit and miss. Sometimes that just the way it goes. We start with Alexandre Chartogne’s NV Brut Cuvée Ste.-Anne, one of my favorite reasonably priced artisan Champagnes. The 2014 Comtes Lafon Meursault-Charmes 1er Cru, from my cellar, is quite open and expressive, especially with a bit of time in the decanter. The 2014 was even more vibrant when we had it a few months ago, but this bottle is an absolute joy. Casey recommends Horiot’s 2014 Rosé des Riceys En Valingrain, a still Pinot from Champagne’s Aube district, as a bridge to the reds. Bright, floral and savory, the Rosé des Riceys works beautifully with the middle courses on the menu. It turns out to be an inspired choice. Plus, I always love tasting wines I am not familiar with. 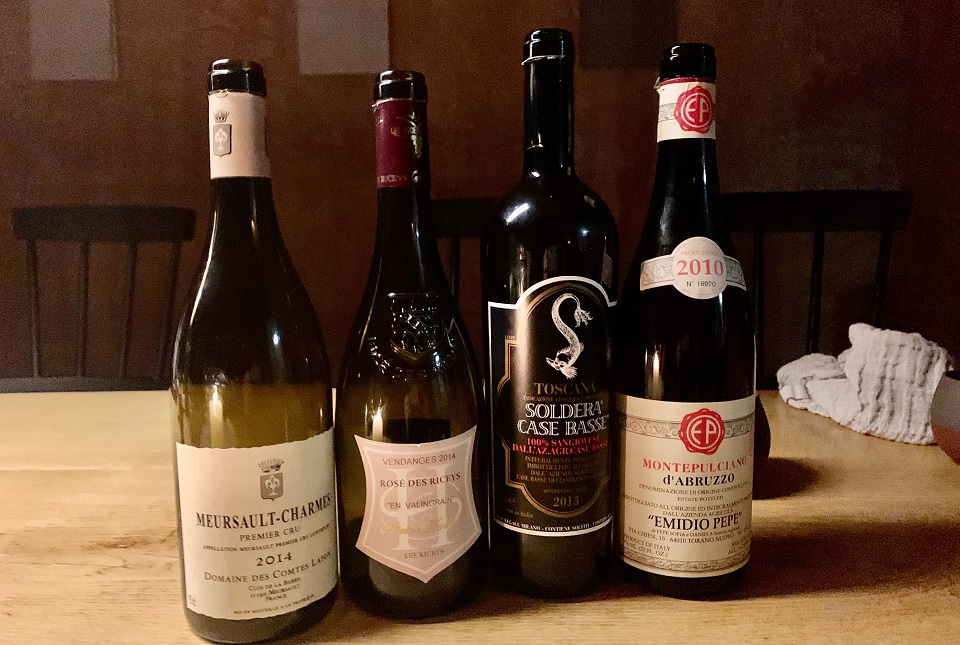 Unfortunately, we don't do so well with our reds. Gianfranco Soldera’s 2013 Toscana is awkward, unyielding and unlike previous bottles I have had. Evidently, it is not the night for Soldera. Emidio Pepe’s 2010 Montepulciano d’Abruzzo, from the restaurant’s list, is even stranger. Something is clearly wrong, but I can't quite put my finger on what, plus we really just want to enjoy dinner. By a very bizarre twist of fate, I ran into Chiara De Iulis Pepe a few weeks later in Beaune while running errands. She explained that the estate discovered a cask of the 2010 had been bottled before completing its malolactic fermentation, which it is currently finishing in bottle. As much as the concepts of ‘natural wine’ and ‘minimal intervention’ sound like good things, bottling a flawed (and expensive) product is anything but. Hopefully De Iulis Pepe will go back to her family’s estate once she completes her studies in Beaune and ensure the bottle variation that has long plagued these wines becomes a thing of the past. Not to be too harsh or critical, but a bottle in this state should never really make it to the table at a restaurant of this level in the first place. In the end, we barely touch the Soldera or the Pepe, but instead immensely enjoy the Horiot Rosé. And that turns out to be just fine, as it is a truly delicious wine with enough complexity to be intriguing, but also a sense of transparency that allows the food to be the star. 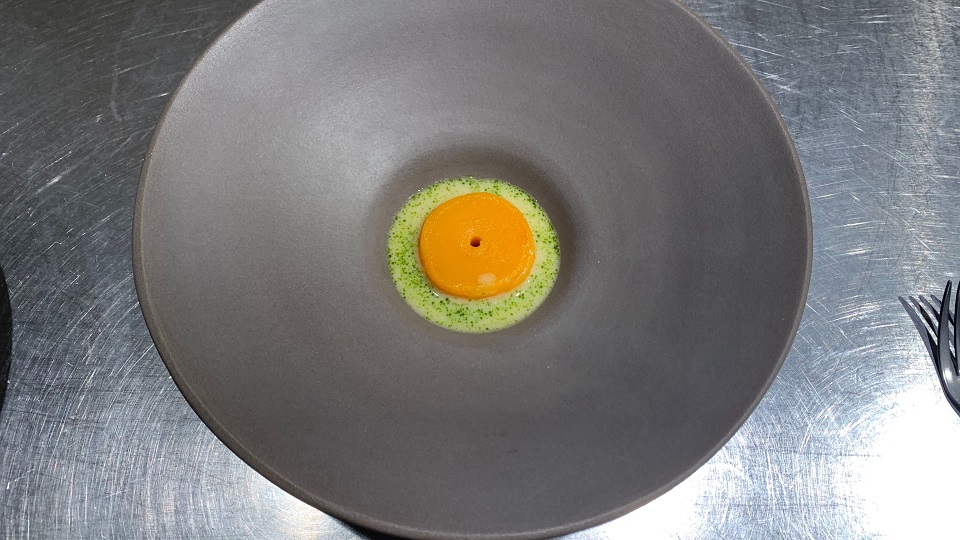 Dinner continues with the beef fat aged lobster, gooseberries and cherry tomatoes, a piece of lobster tail aged in beef fat, poached in brown butter and beef fat, and then served with a rich lobster bisque-like sauce that is to die for. We are back in the kitchen for the fermented girolle flatbread, lobster claw and XO, which is divine. Delica pumpkin with barley koji and tarragon is as delicious to eat as it is striking to look at. I also love the beef shortrib tartare, the richness of the meat offering a fabulous contrast to the raw preparation. The inoculated Wagyu skirt and preserved girolles is a suitably rich courses toward the end of the meal. After all that protein, a scoop of roasted cherry stone ice cream and blackberries is delicious, simple and refreshing. To close, the celeriac, black truffle and rice koji is a sort of crisp that melds together earthy, savory and lightly sweet flavors, served family style. It is an intriguing, if somewhat eccentric, dessert that somehow works. 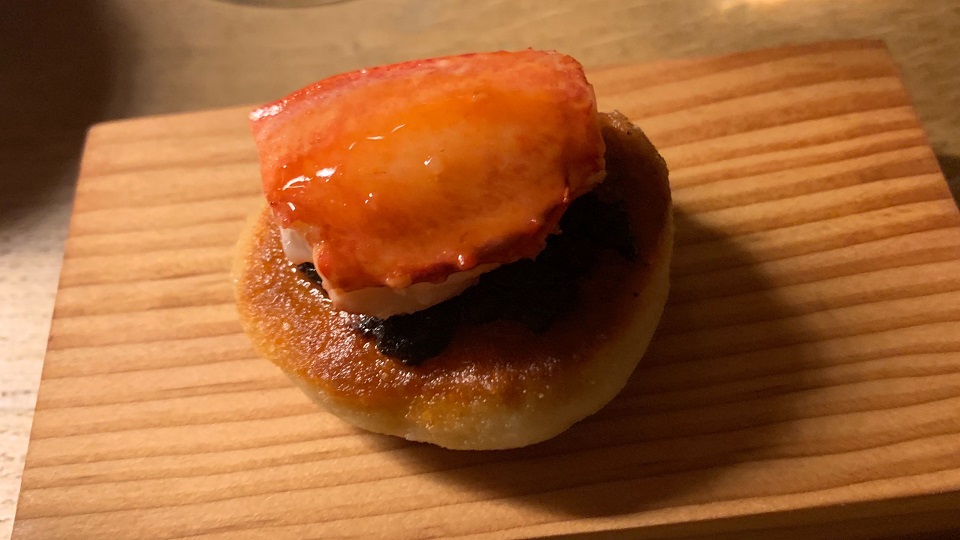 If you love food and cooking, dinner at Mãos is a must. Alex Casey tells us that while the menu evolves constantly, a cycle of complete change happens about once every three months. Has it been three months yet? 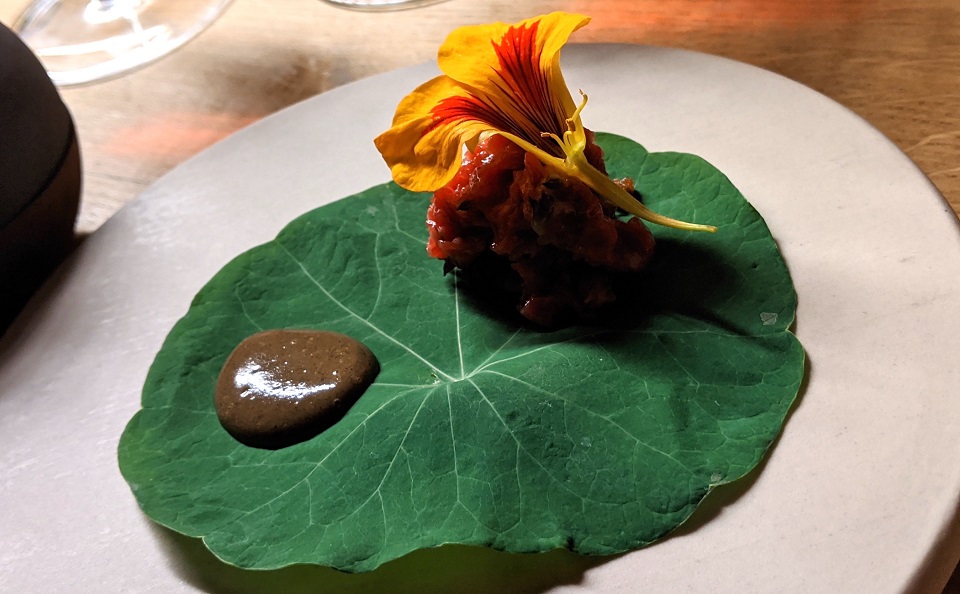