Though it’s located in Fiumicino, better known by travellers everywhere as the location of Rome’s main airport (when in fact the name of the airport is “Leonardo Da Vinci”; Fiumicino is the town the airport is located near to), the one star Michelin Pascucci al Porticciolo is considered the Eternal City’s best seafood restaurant. It’s truly a husband and wife show, with Chef-owner Gianfranco Pascucci as the creative force manning the stoves, and wife Vanessa running things admirably in the busy dining room. Gianfranco, a true virtuoso of everything that swims, proudly states he works with no farmed fish whatsoever; his menu changes often, and so repeat visits are routine for most happy customers (over time, you actually start recognizing some of the other faces dining in the restaurant). In short, Pascucci al Porticciolo is one of my favourite Sunday lunch addresses, especially during summer time. 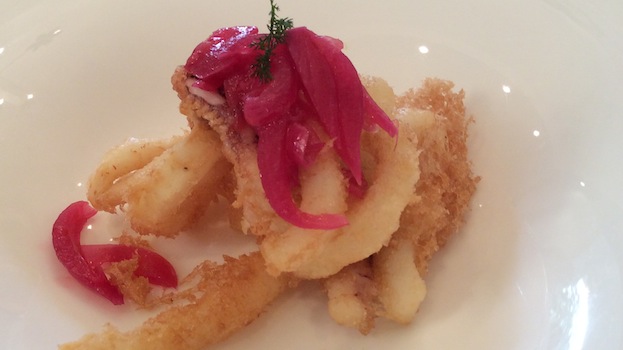 Now twelve years old and counting, the restaurant started life as a large undistinguished eatery but gradually evolved to become an elegant gourmet stop with well spaced tables and a lovely covered outside dining area. I began this particular Sunday lunch with one new and one classic dish: the Bluefish and the calamari. The innovative Bluefish creation was interesting but left me non-plussed, while the delicately fried calamari with the onion-orange chutney remains a winner. My advice is for you to ask for more of the chutney, since it is present in only miniscule quantities on the plate, while it’s utterly delicious, and is delicious enough to be eaten all on its own. The standout maltagliati pasta is concentrated with an intense shellfish reduction; this adds a saline note and depth of flavor that complements the purity and freshness of the Dentix dish. Incidentally, the homemade bread and grissini at Pascucci are especially noteworthy. 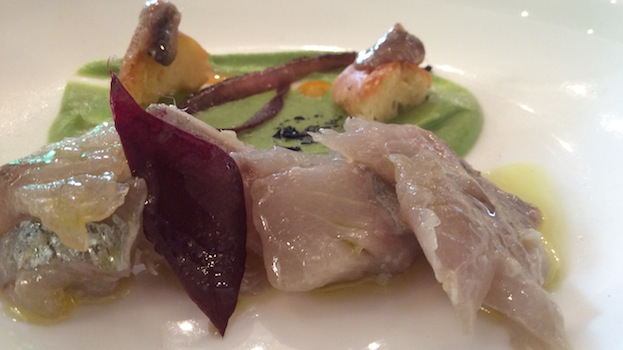 The wine list at Pascucci al Porticciolo is outstanding: though it could use a few more older vintages. The list is especially good in that it has been compiled by people who clearly know what they are talking about. Over the years, Pascucci has had many outstanding somms, such as current head man Leonardo Calli, and Mirka Guberti, who is now at another Michelin starred restaurant. Here you won’t find any of the often highly recommended (not by me) undistinguished large estates or bottlers from the likes of the Marche, Abruzzo or Sardinia, but rather small, high quality estates that produce wines faithful to the varieties listed on the label. A smattering of well-selected foreign wines nicely rounds out the list, though there is certainly room for more. 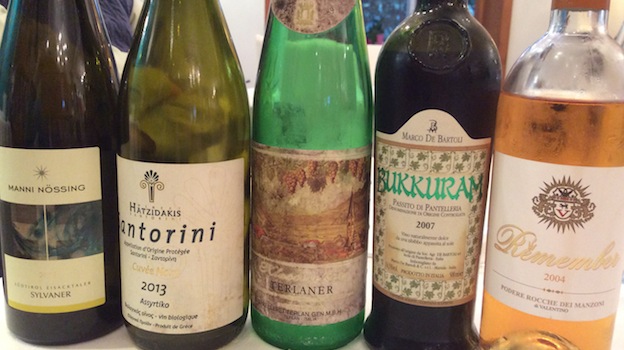 I kicked things off with the outstanding 2012 Manni Nossing Sylvaner Eisackthaler from Alto Adige, a simply great Italian white wine (in which is, in my opinion, one of Italy’s top 20 or so greatest whites. Nossing is actually more famous for his excellent Kerner of which he produces more bottles, but truly knowledgeable Italian wine lovers know it’s the Sylvaner and the amazing Muller-Thurgau Sass Rigais (made in homeopathic small quantities) that are his best wines. The Sylvaner’s intense, penetrating white flower, quince, green apple and tangerine aromas and flavors, and bright, harmonious acidity matched extremely well with were a perfect match for the bluefish and fried calamari dishes. Next I moved on to the very flavorful 2013 Hatzidakis Assyrtiko Cuvée No. 15 Santorini, a standout wine made with organically grown grapes from Greece. Over the years, I have been closely studying Greek wines made from their native grapes and I have always found this to be one of Greece’s most successful wines. In 1996, Haridimos Hatzidakis replanted a small vineyard that had been abandoned after the 1956 Santorini earthquake. Although this vineyard was originally cultivated with Aidani, a native grape variety of Santorini, the winery has since added other cultivars as well. The Assyrtiko Cuvée No.15 looks and tastes like it is the result of more than the reported twelve hours of skin contact. Having been aged on its lees for eight months in stainless steel tanks, and bottled unfiltered, the wine is rich in texture and mouthfeel. Suprisingly concentrated, the wine’s intensely stony, saline and citrus aromas and flavors sparred perfectly with the maltagliati pasta, resulting in one of my better food and wine matches of the year.

Next came the wonderful 1989 Terlano Terlaner Alto Adige, which was still drinking beautifully (this wine is now named Terlaner Nova Domus). There is perhaps no winery in Italy that makes better, more ageworthy wines than Alto Adige’s Terlano, and this 1989 is still youthful and delicious. The Terlaner is a blend of Pinot Bianco, Chardonnay and Sauvignon Blanc, in which the Pinot Bianco is dominant (not surprising, given the outstanding hand Terlano has with this variety). It is full of honeyed mineral, stone fruit and floral reminders that last and last. Though good enough to drink on its own, it lifted the Dentix preparation into another dimension, adding nuances and complexity to a fish blessed with plenty complexity and depth of its own. 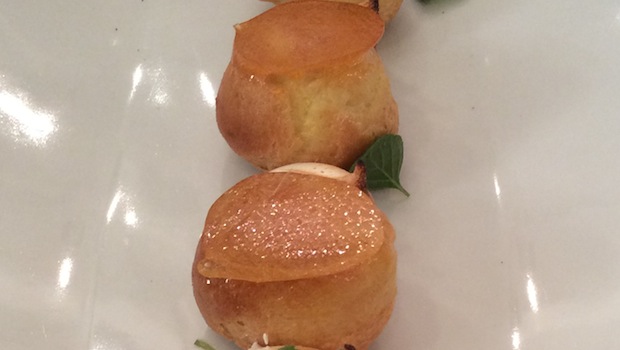 I finished with the delicious sabayon puff pastries, trying both the 2004 Rocche dei Manzoni Remember and the 2007 Marco De Bartoli Passito di Pantelleria Bukkuram. The former is a rare (for Italy) Sauvignon Blanc-Semillon blend made only in years when noble rot manages to hit the late harvested grapes. Though not especially complex, is balanced and clean, with lovely notes of orange oil, honey and ripe tropical fruit. The latter is one of Italy’s best sweet wines, made by the country’s most famous and best Marsala producer. A rich and thick wine lifted by bright acidity, its lingering dried fig, raisin and chestnut honey aromas and flavors were the perfect end to the meal.