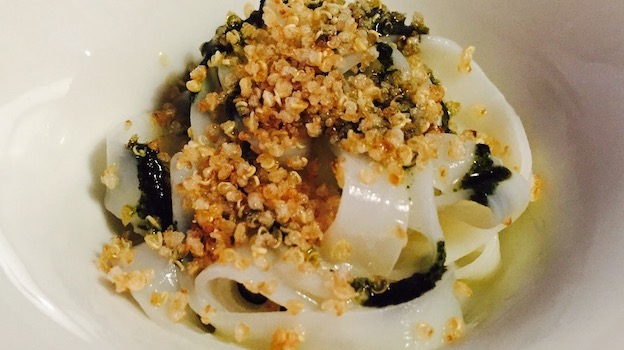 Tagliatelle of cuttlefish with nori pesto and fried quinoa

Brother and sister Mauro and Catia Uliassi (he’s the Chef, she runs the front of the house) opened their restaurant in 1990 and have essentially never known anything but success. Located right on the seashore of Senigallia, in the Marche, Uliassi offers a modernist take on old classics, but there is a solid mastery of traditional techniques and real knowhow in every dish that emerges from the kitchen. The interior of the restaurant is very modern and bright, while Catia’s artwork graces the cover of the menus. 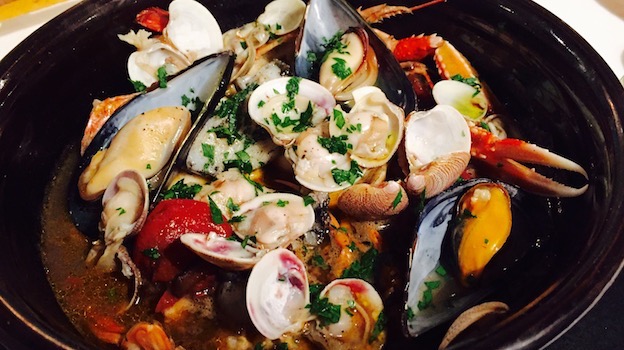 Guazzamollo of crustaceans and mollusks in the manner of Senigallia

Although I had a few less than memorable meals here roughly eight to ten years ago, I am happy to report that Uliassi is on a tear of late. Every recent visit has been memorable, including a meal Mauro cooked at a big wine dinner far removed from the friendly confines of his own kitchen that was nothing short of perfect. The decision to have nineteen (19!) members of his staff with him shows the dedication and willingness Ulisassi has to go the extra mile. Those choices invariably pay off, in the short and long run. And so it is that a small beach side hut that once prepared mainly simple but precise seafood dishes earned its first Michelin star in 2000 and tallied its second in 2009. Today, most experts agree that Uliassi is, easily, one of Italy’s 20 best restaurants. 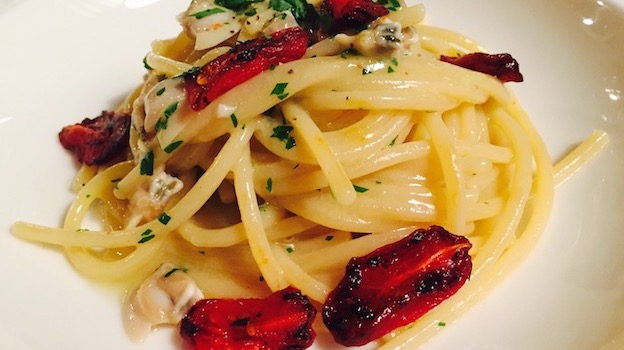 My most recent dinner at the restaurant went off without a hitch and will rank as one of my best meals of the year. I found the smoked spaghetti with clams and roast datterini tomatoes and the linguine “Antonio Mattei”, with granceola, lime, mint and coconut to be especially deserving of seconds (or thirds). The former is a dish that highlights Uliassi’s love for the sense of smell: he got the idea for this specific dish by walking by the pop-up beach huts grilling seafood on Rimini’s boardwalk. The combination of smoky, yet fresh aromas wafting through the air led him to conjure up what is a simple yet tremendously sophisticated dish, and very typical in fact of his cuisine. The latter is instead a pasta made by the very high quality but perhaps little known (outside of Italy) Felicetti pasta company, located in Trentino (not the more usual and more famous pasta making Italian regions of Campania, Marche or Abruzzo!), where four generations have been successfully plying their trade since 1908 (the “Antonio Mattei” in the pasta’s name is in honour of an old family friend). 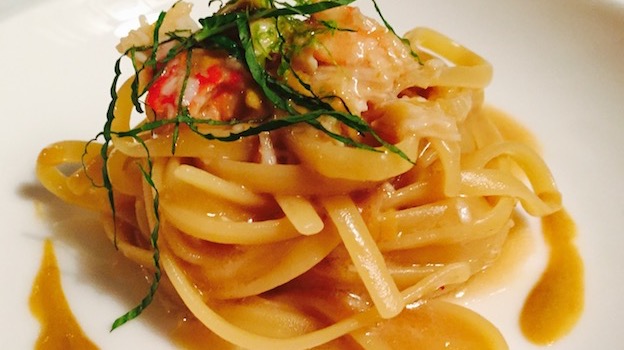 The guazzamollo of mollusks and crustaceans in the manner of Senigallia and the Fish Brodetto cooked in the “coccio” are two different takes on everyday poor fishermen’s fish soups Italy’s Adriatic coastline. These are renditions of fish soups that were made (and still are, in fact) directly on the boats of fishermen at sea: lesser quality fish or damaged specimens not likely to sell or to keep well were chosen to use for the fishermen’s daily meals on board. Very traditional dishes of the area, guazzamollos and brodetto (usually referred to as guazzetti and zuppe in southern Italy) are taken extremely seriously in this neck of the Italian woods: just imagine that there exists an Accademia del Brodetto (the Academy of the Brodetto) that has officially certified the different brodetto recipes of the cities of Ancona, Fano, Porto Recanati and San Benedetto, all in the Marche region (officially the recipe ingredients and cooking procedures have been legally deposited at a notary’s office in Ascoli Piceno). Needless to say each town believes its version to be the best; and that doesn’t even take into account the many other versions made all along the coastline of Abruzzo, the region hugging the Adriatic shoreline just south of the Marche! Every self-respecting Italian has a favorite version he or she swears by. I can vouch for the fact that some of the most fun evenings I have ever spent over the years were in the company of good friends blind tasting the various brodetto recipes and then voting, at evening’s end, on which city’s or town’s we liked best. Uliassi has always had a special love for wild game and fare is always present at the restaurant, although on this night we stuck with fish and seafood. 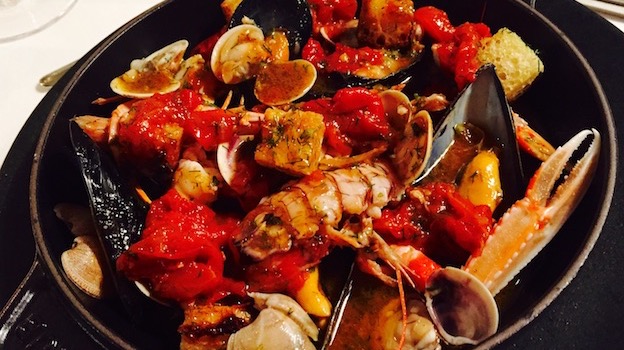 Thanks to Uliassi’s interesting wine list that still has a few old vintages hanging on, on this specific evening I was also able to try good wines with some age on them. The 2001 Mount Horrocks Riesling Watervale is drinking well, and testifies to the age-worthiness of high quality Australian Riesling wines. Diesel fuel and surprisingly ripe white stone fruit dominate on the rich, classically dry finish. It proves fine both as an aperitif and with the antipasti. The 1999 Albert Pic Chablis Grand Cru Valmur is in its drinking prime, and is one of the best wines I have ever tried from Pic, a historic house founded in 1755 that today is owned by Ladoucette and remains the oldest Chablis domaine of all. This bottle exudes the honeyed aromatic charm and smooth texture of typical Valmur wines. 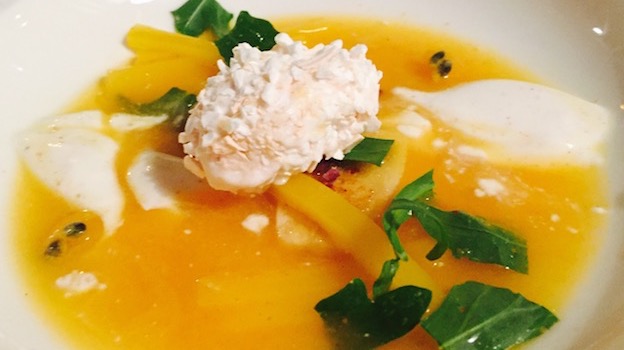 Last but not least, I finish off the evening with two curiosities. The 2013 Stefano Antonucci Verdicchio dei Castelli di Jesi Passito Lina is a sweet Verdicchio wine made by air-drying the grapes for three months in small wooden boxes, and is dedicated to Lina, Stefano Antonucci’s mother. I am not a huge fan of Verdicchio Passito wines, finding that the non-aromatic nature of the variety makes for fairly simple sweet wines, but I’ll admit this is an extremely successful version with bright aromas and flavors of stone fruit, crystallized ginger and apple sauce. 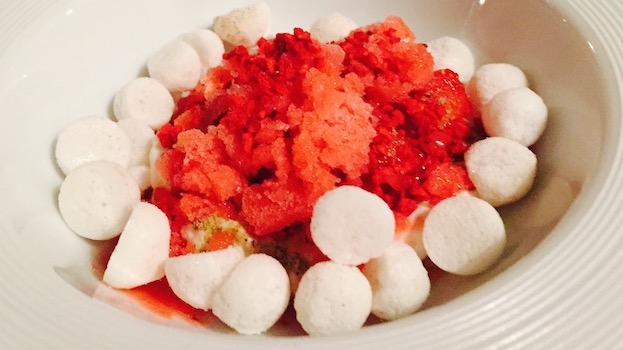 The 2013 Vigna degli Esterni Vino e Visciole Vìcer is a specialty of the Marche, where there has long been the tradition of infusing cherries in wine or other suitable spirits. Traditionally the local (excellent) wild cherries are picked late in July, slightly mashed and macerated with a sugar syrup. The sweet, intensely perfumed and flavorful liquid that collects is then added to the must of Lacrima wine (Lacrima is the aromatic red variety typical of the Marche region and used to make the often outstanding Lacrima di Morro d’Alba wine) starting off fermentation and leading to this intensely cherry scented and flavored wine. When well made, it’s an absolutely smashing way to finish dinner, as is the case on this magical night. 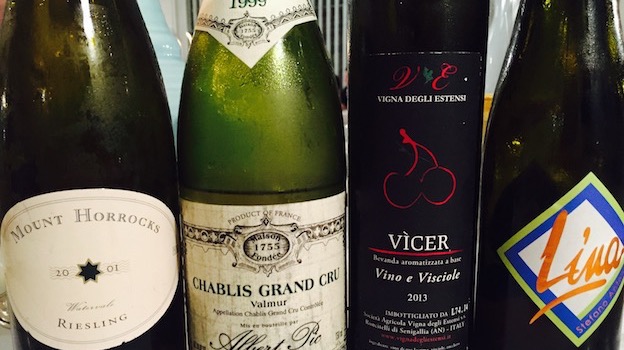