Barberian’s may very well be Toronto's most famous steakhouse. While other Toronto steakhouses also offer wonderful quality in their dry and wet aged beef choices, it’s impossible to argue with the quality of Barberian’s wine list, one of the most impressive anywhere in the world. I’m not exaggerating: what else can you say about a wine list that boasts eleven different vintages of Harlan Estate and another eleven of Grange? And there are actually more vintages of each listed, but that are currently out of stock. The Old World gets more than just fair representation too: ten different bottlings of Bruno Giacosa wines, ten vintages of Solaia and a treasure trove of great French wines make you want to come to Barberian’s just to drink the night away. Fact is, the place has been open since 1959, and in a city were the death rate of restaurants is close to 50% in the first three years, that tells you Barberian’s has had a lot of loyal fans and customers over the years. When living in Toronto during my teen years I used to come here often with my parents, but hadn't been back in some time. Still, the place has remained essentially unchanged, a time warp into the Toronto of days long gone by.

The food itself is steakhouse-typical: lots of meat cuts you expect (rib, filet mignon, porterhouse), plus the steakhouse typical seafood (shrimp cocktail, tuna steak), dishes (surf ‘n turf, lamb, vegetable sides) and desserts. No flights of fancy and no fashionable ingredients, just solid all-round, no frills cooking. My Caesar salad was crisp and refreshing, though anchovy-less. The rib was perfectly cooked, but my specific piece (very marbled when still raw) was rather fatty, which may not be to everyone’s taste. The filet mignon might be a better choice for those who like somewhat leaner cuts of beef. 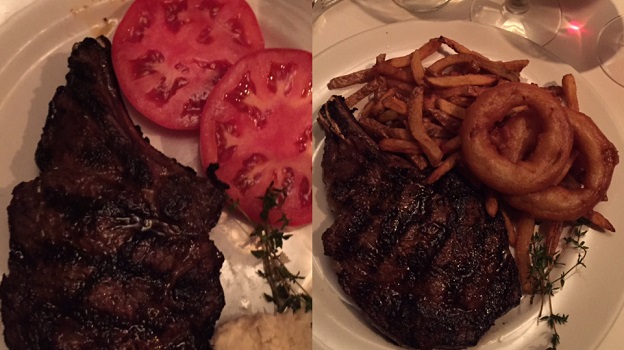 The wine list is so huge, so deep and so varied that it is impossible to get through and still talk to your guests at the dinner table. Though there were literally hundreds of wines I would have liked to try, I stuck with Canadian wines (and specifically Ontario’s) given that it’s rare to find older vintages of these in restaurants. Henry of Pelham’s Cuvée Catharine Brut is probably Ontario’s best sparkling wine; at the very least, it’s the most consistent. This particular bottling had been disgorged three years prior after having spent 36 months on its lees, and had been left purposely in Barberian’s cellar to develop further. Buttered toast and caramel nuances dominate overall, but floral nuances and vibrant acids have kept this beauty fresh and lively. Like is often the case with New World sparklers, it lacks the multilayered complexity of the world’s best bubblies, but this is an extremely impressive bottling from a region in which sparkling wine production was essentially an afterthought only fifteen years ago. And it makes perfect sense to try serious sparkling wine production in Ontario’s cool climate. 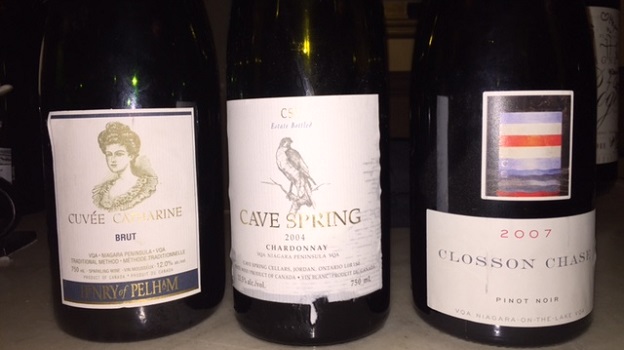 That same cool climate explains why Ontario makes world class Riesling, Chardonnay and Pinot Noir wines. I had just finished tasting through about 80 Rieslings the previous day, so I opted for the latter two grapes at dinner. The 2004 Cave Spring Chardonnay CSV has held up remarkably well and is still amazingly youthful, with at least a decade of life ahead of it. Now just think about how many New World chardonnays you can really say that about! Back then, Cave Spring’s use of oak was slightly more heavy-handed than it is today, and this wine’s tropical fruit aromas and flavors are dominated by oak-derived notes of peanut brittle and spices. The long, vibrant finish also has noteworthy tannic bite, but the wine comes across as chewy and rich, not bitter or astringent. It is a major accomplishment from what is arguably one of Canada’s top five wineries. But the absolute star of the night was the remarkable 2007 Closson Chase Pinot Noir Niagara-on-the-Lakeshore, another testament to just how well Ontario wines can age. This might well have been the best Pinot Noir I have ever tasted from Canada with a little bottle age, a wine of impeccable balance and purity. The aromas and flavors of juicy ripe blueberry, black cherry, and sweet spices are typically New World in style, but there’s none of the candied fruitiness of many such wines. A lovely floral finish provides lift and further clarity. Eight years out, it’s an amazing wine given that it’s an essentially entry-level bottling, made in a very hot year and from a rather warm site. To say I was blown away is not overstating my case.

My evening at Barberian’s was a winner from start to finish. Owner Aaron Barberian is polite and gracious, and his two guest star sommeliers of the evening, Will Preud’homme MS and Peter Boyd are about as good as it gets in Canada. Well done!