Unlike my parents, who are tucked up in bed with a hot water bottle by nine o’clock, seeing in the New Year is important to this writer. Celebrations have evolved over the years. As a teenager, you would find me at The Grand, my local pub, packed liked sardines with fellow underage inebriates, perched on a wobbly table with my arm around a stranger, a beer in each hand, counting down to midnight. Things have calmed down since then. In recent years, my family has decamped to the wilder parts of England – anywhere with snow-dusted mountains and lakes. Being surrounded by nature in the fresh open air is ideal for resetting one’s mind, and a perfect full stop to the preceding year.

Lockdown nixed any plans to see in 2021 in any such shape or form. Options ranged from staying at home to staying at home. Surviving until the end of this wretched year felt like something worth celebrating, so we decided upon a Japanese-themed evening. New Year is the most important national holiday in Japan, a country where, sadly for Santa Claus, Christmas Day is only given lip service. For many Japanese, New Year or shõgatsu is the only time they down tools and visit relatives. Unlike in Western culture, where the emphasis is more on joining friends for a night of hedonism, Japan’s New Year is more family-oriented and reflective. They will probably share dinner together and watch a music show with the most famous J-pop and enka singers of the day. Cards are exchanged and lucky children are given decorative envelopes or nengajo containing money. (Unsurprisingly, my daughters insisted that this part of Japanese tradition be upheld.) There may well be a trip to the local temple or shrine called a hatsumode. During this festive period, temple grounds are full of stalls doing a roaring trade selling takeaway food or lucky charms. At midnight, enormous bells ring continuously, and holy sites remain crowded for the following couple of days for visitors to pray, or draw omikuji, random slips of paper that tell their fortune. 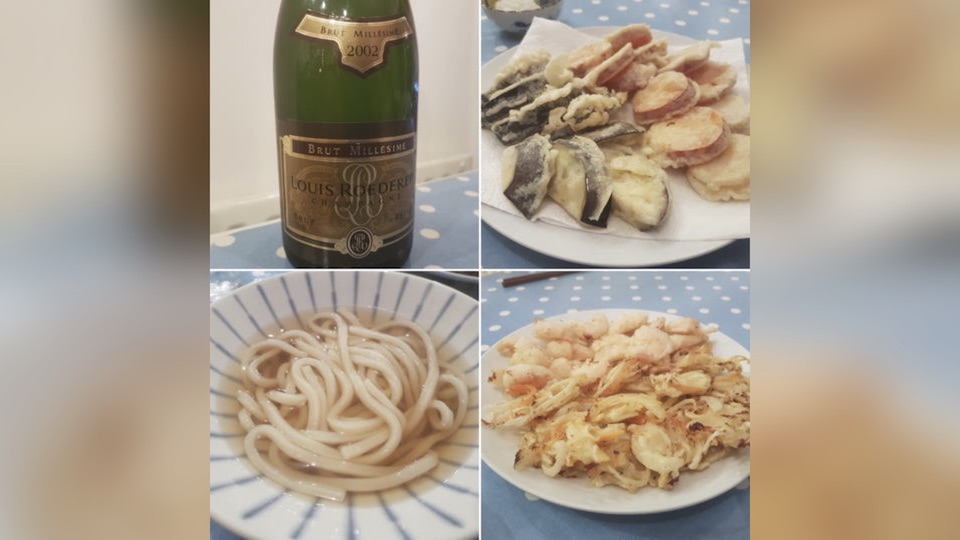 Given that we were isolating in Guildford rather than Tokyo, we had to make some compromises on the food front. Thankfully, London is now much improved in terms of sourcing genuine Japanese ingredients instead of the faux-Japanese products one finds in supermarkets. We usually drive to Ealing and Acton, where a cluster of excellent local shops such as Atari-Ya and Natural Natural supply the Japanese community that clusters in West London. So our larder is permanently stocked with Japanese ingredients plus a mountain of rice. We try to buy a large bag imported directly from Japan, since it always has more flavor and the right amount of stickiness, though there are now excellent cost-effective European alternatives that make the grade. (We are currently using a brand called Minori from Tarragona in Spain.)

Traditionally, Japanese families will eat toshikoshi soba, which literally translates as “year-crossing soba” (buckwheat noodles). This dish symbolizes longevity: the longer the noodle strand, the longer will be your life. If you do follow this tradition, then finish your bowl, because it’s bad luck to leave any. The noodles are often served with mochi or rice cake. The traditional way to make mochi is to pound a large ball of dough with an enormous hammer and keep flipping it over until it has the right gooiness. Without an enormous hammer and several hours to spare, just buy a packet from a shop.

We boiled the noodles and served them in a clear, thin broth known as tsuyu, which is made from a dashi soup stock. Of course, with the pandemic raging around our postcode, I double-checked the length of the strand to confirm that I will get through to the end of 2021. You can serve the noodles hot or cold; I prefer them hot. This dish was accompanied by a plate of assorted tempura (sweet potato, aubergine and shrimp) and then a side dish of kakiage, essentially battered carrot, onion and bean sprouts. In a diversion from Japanese tradition, I unleashed a 24-month Comté from the Alan Hess fromagerie in Beaune that I had brought back from Burgundy. (This is one of the best lengths of aging for Comté in my opinion; 18 months is too bland and 36 months is too bitter.) Served with Wilkinson’s quince jelly, it made a perfect combination.

I suppose in keeping with the theme we should have drunk some Japanese sake, but I had already put a few bottles aside for the occasion. Therefore, we commenced with my last bottle of 2002 Brut Millésime from Louis Roederer. This has been drinking supremely well in recent months. The vivacious, beautifully defined yeasty nose offers hints of brioche and grilled almonds, and hazelnut in the background. The palate is à point, with a fine bead of acidity that complements the continuing yeasty theme. Quite saline in the mouth, it displays a lovely bitterness and nuttiness toward the finish that gets the saliva flowing. We become starry-eyed with prestigious cuvées in their deluxe packaging, but I often obtain just as much satisfaction from more modest champagnes like this, which frequently age supremely well. 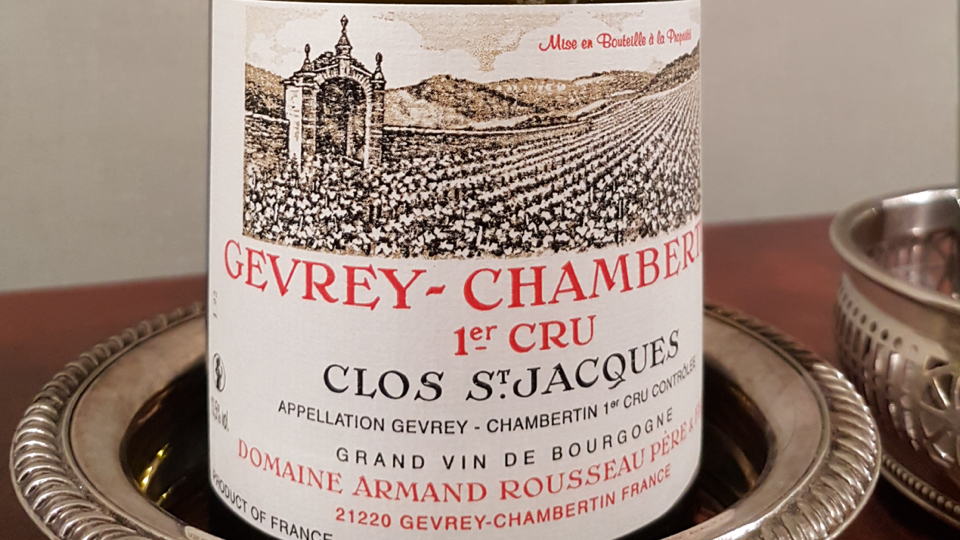 Given the year, a couple of special bottles were necessary. First up was my last bottle of 2009 Gevrey-Chambertin Clos Saint-Jacques 1er Cru from Domaine Armand Rousseau. I had not tasted this particular wine since I encountered it from barrel. Back then, I was not quite as enamored of it as I expected, partly because the nuances of the terroir are obscured by the warmth of the growing season. Now, with a few years on the clock, I still believe that it is a good rather than great Clos Saint-Jacques. Powerful scents of red cherries, licorice and allspice feature on the nose, which does not quite achieve the delineation of the best examples I have tasted. Likewise, the palate is delicious as a Pinot Noir but falls short of evincing Clos Saint-Jacques as “a Grand Cru in all but name.” Presenting soft red berry fruit, hints of sage and bay leaf, it comes across more sinewy than other vintages, with a touch of meat juices on the finish. It is certainly drinking now and should give another decade of pleasure at this level, but Eric Rousseau and now his daughter Cyrielle have made better Clos Saint-Jacques. 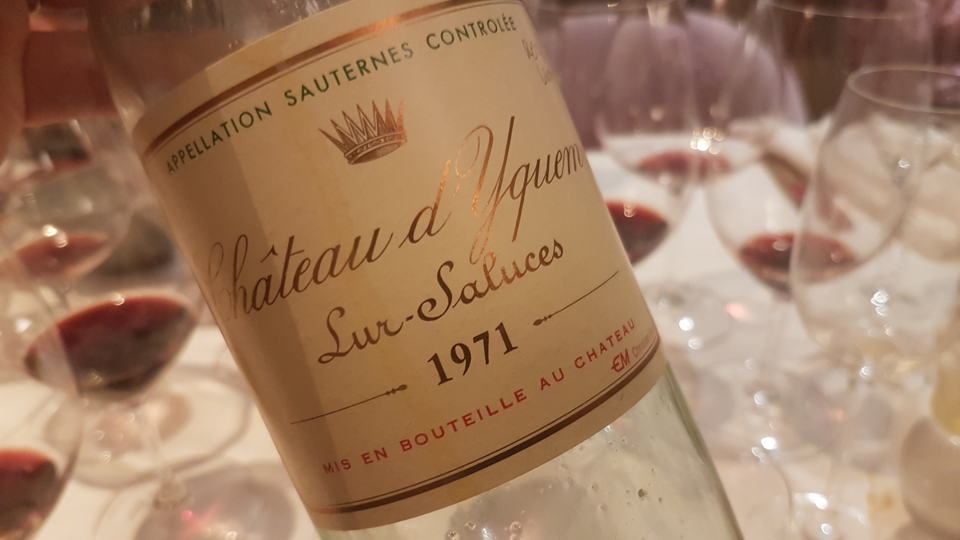 My picture of the bottle came out blurred, so I dug up a better image of the previous one I had.

Finally, one of my favorite vintages of Sauternes: the ethereal 1971 d’Yquem. Fingers crossed I will be reaching a significant milestone in February, so just in case something untoward happens between now and then, why not open this bottle? It was acquired many moons ago when it sold for a fraction of its present market price, principally because it lies in the shadow of the lauded, and in my contentious opinion inferior, 1967. This vintage has been cruising at a high altitude for a few years now. Gleaning the château records, it was picked over 10 days from October 6, yielding a small vintage of just 228 barrels. It has a dark straw hue with green tints on the rim. The bouquet is stunning and exudes the same energy that I have found on previous examples, with scents of dried honey, Seville orange marmalade and melted candle wax. The delineation is enthralling. The palate has retained that almost Tokaji Aszú–like personality underpinned by wonderful acidity that renders this Yquem so tensile. Delivering orange peel and apricot, lemon curd and crushed stone, it has wonderful lip-smacking salinity and superb length. A brilliant Yquem still full of vim and vigor, one that should give another couple of decades’ drinking pleasure.

With stomachs full, the family settled down to watch a Japanese anime, Weathering With You, a great film even though I fell asleep halfway through. Fortunately, I woke up before midnight. We counted the chimes of Big Ben and watched the fireworks over the O2 Arena, which seemed intent on ramming home the awful year. I half-expected the final firework to recreate an image of the coronavirus. Twenty-twenty was over. As the song goes: “Things Can Only Get Better.”