Ballotine of Guinea fowl and chicken with leek, shitake mushroom and Waldorf garnish

Confit of duck with mushroom risotto and spinach

Cornish hake with tartar and arancini

Every now and again, you stumble upon a dining experience so perfect, that frankly, if someone had run into the restaurant breathlessly announcing that Ferran Adrià was re-opening El Bulli for one night only just down the road, I’d have replied: “Nah thanks, mate. We’re alright here.” I feel a positive vibe, an inexplicable rush of optimism, even before entering the restaurant for the first time. Intuition? Gut feeling? Fate? I dunno. But as soon as I set eyes on The Parson’s Table, I knew that I would be celebrating my birthday in the best possible manner. 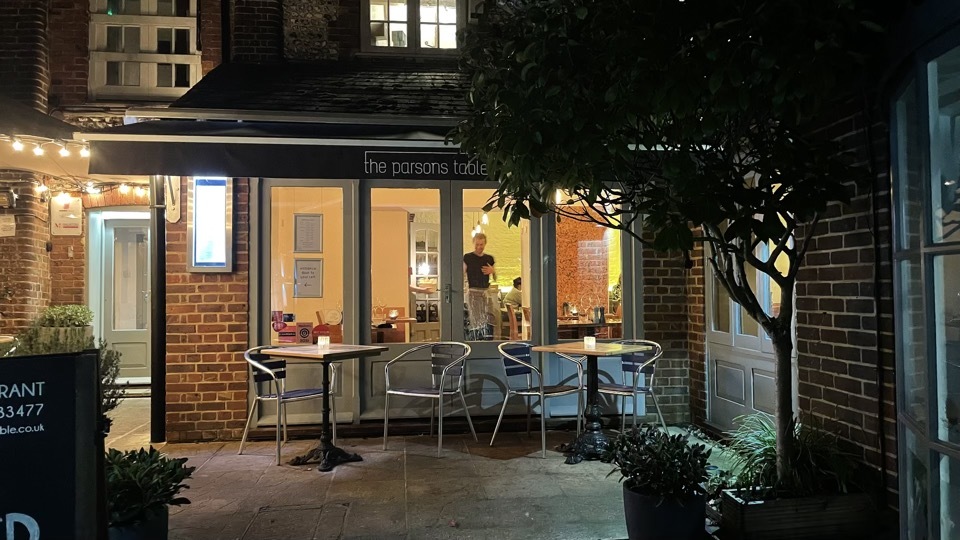 The Parson’s Table nestles in the town of Arundel in West Sussex, seagulls squawking overhead serve as a reminder that you are not far from England’s south coast. It is famous for its Roman Catholic cathedral and the 11th century castle, remodelled over subsequent centuries by various Dukes of Norfolk, that looms over the quaint buildings at the heart of Arundel. It is an absolutely beautiful place to visit, not too far from London if you happen to be over on holiday. The restaurant is co-owned by Lee and Liz Parsons; chef Lee Parsons worked at Raymond Blanc’s Le Manoir aux Quat’ Saisons before becoming a bit of a celebrity chef in Canada. The couple moved to Arundel in 2015 to set up their own independent restaurant. The menu is based upon French-influenced British cuisine using seasonal ingredients and traditional techniques. 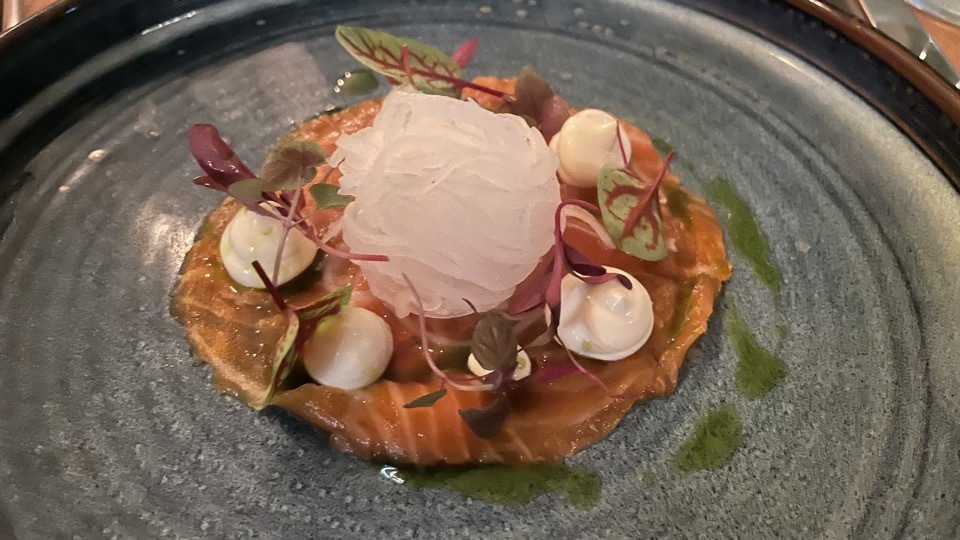 Funnily enough, we found The Parson’s Table after misreading that it had a Michelin star, when in fact, it is simply recommended in their guide. Maybe the older I get, the less I crave the froufrou, the accoutrements of a Michelin-starred restaurant. Give me good food and a nice ambiance. In this respect, The Parson’s Table delivers. It is veiled in that relaxed rural atmosphere that is impossible to find in a city. Its location in the middle of Arundel, its whitewashed brickwork and discrete lighting, imbues the interior with cosiness. No need for fancy décor. Most importantly, every dish was absolutely delicious. We are not talking about a menu designed to show the chef’s mastery in the kitchen or faddish, costly ingredients flown first-class from some island off Japan. The key to the cooking here is simplicity and execution. I found it impossible to think how I might improve any of the three courses. 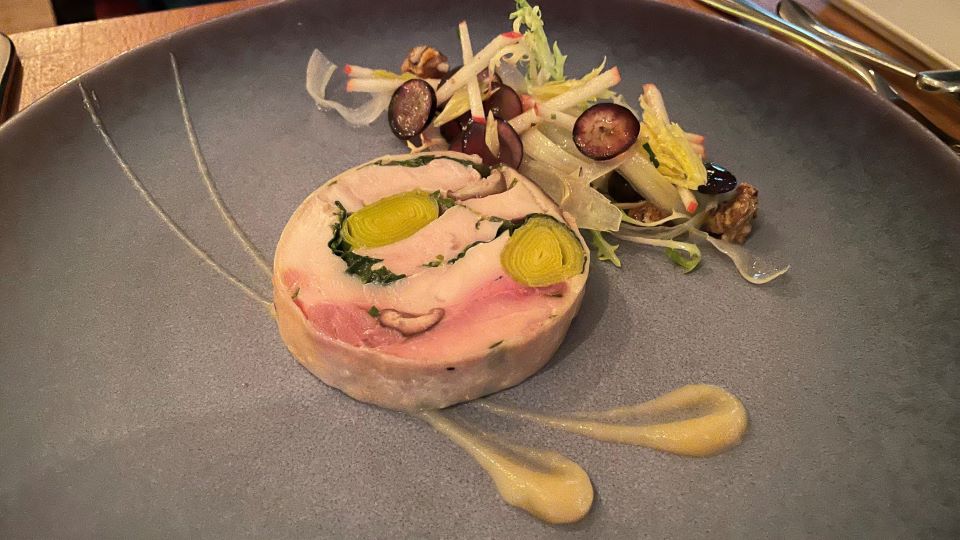 Ballotine of Guinea fowl and chicken with leek, shitake mushroom and Waldorf garnish

For starters, we shared a fresh trout served with ribbons of shredded daikon, blobs of mayo and garnished with green leaves. The fish was achingly delicious, packed full of flavour yet light as a feather. Plus it was healthy. The ballotine of guinea fowl and chicken with leek, shitake mushroom and Waldorf garnish had a lightness of touch that might be lost in the hands of a less experienced chef. The combination was perfectly balanced and seasoned. 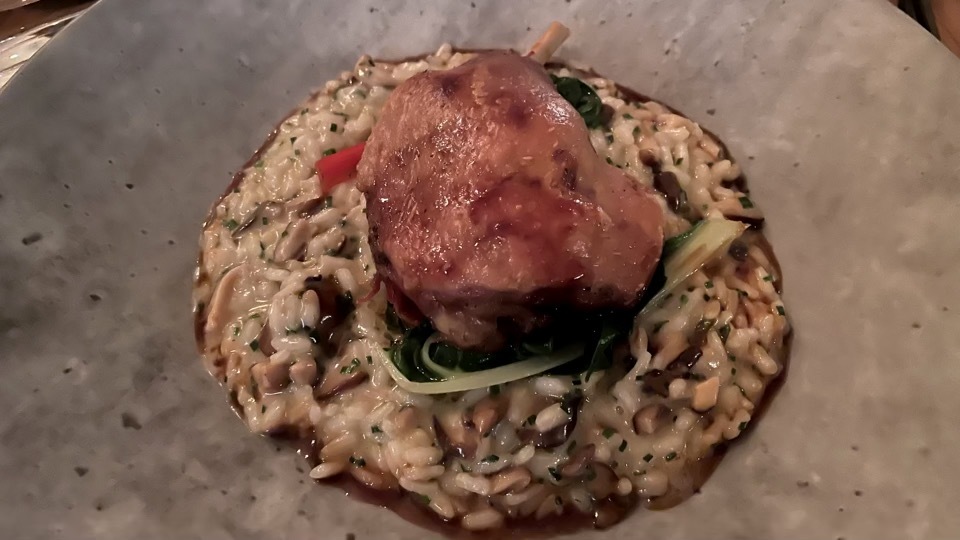 Confit of duck with mushroom risotto and spinach

For mains, my confit of duck with mushroom risotto and spinach was cooked to absolute perfection. The duck was pink and moist, thankfully not too fatty, and crucially, that skin had just the right amount of crunch and saltiness. It matched the mushroom risotto wonderfully, again, lightly seasoned with the spinach imparting countervailing bitterness. On the other side of the table, freshly-caught hake with tartar and arancini. The waitress told us that the fish usually comes locally from waters off Hove, though this hake was fresh off a trawler combing Cornwall’s deeper waters. It was a lovely cut, moist and tender, and like the duck, the skin had the perfect crunch that lent texture and salinity. 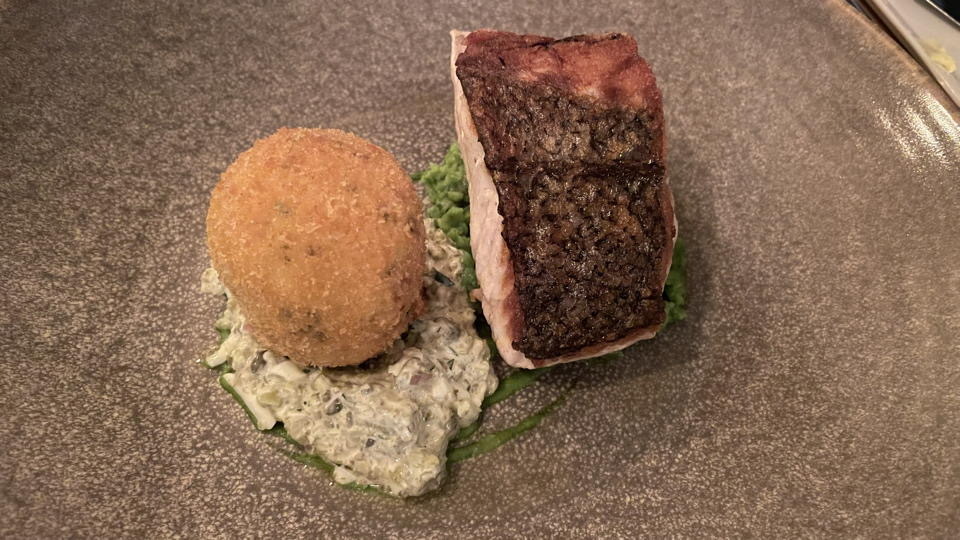 Cornish hake with tartar and arancini

For pudding, out came my dark chocolate delice with a solitary candle stuck on top. I made my wish, but unfortunately it did not start raining 1945 Romanée-Conti outside. I appreciated that this was not an overly generous delice that you had to work your way through, so packed with chocolaty goodness that you did not need any more. Perhaps the real star was the drop-dead gorgeous blood orange, orange curd and marmalade ice-cream. Wow. This worked a treat because the orange flavourings were nuanced and perfectly matched with the chocolate delice. 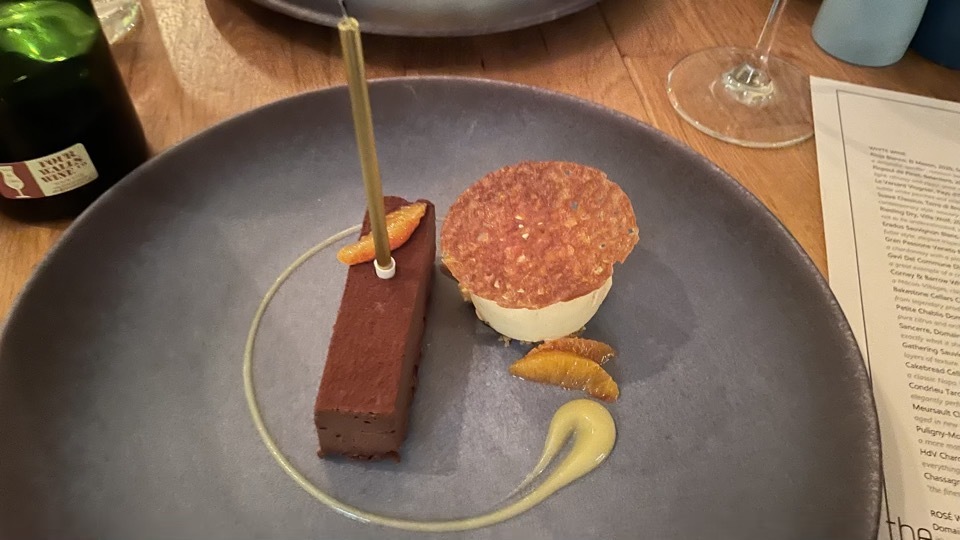 The wine list is supplied by local merchant, Four Walls Wine. Perhaps here, I would have liked an expanded list covering a few more countries and some more esoteric suggestions. Certainly, the quality of cooking deserves it. That said, the wines are all well-chosen. The 2018 Brut Reserve from Gusbourne in Kent provides more evidence, not that it is really necessary anymore, that English sparkling wine is really delivering. A tripartite blend of Chardonnay, Pinot Noir and Pinot Meunier aged for 36 months on the lees, it offers enticing orange blossom, Nashi pear and hints of crème fraiche on the nose. The palate is imbued with a slightly creamy texture offset by well-judged acidity and a malic bite on the finish. Next, one of my favourites, the 1983 Léoville-Poyferré. It had been some years since I tasted this Saint-Julien, and it has always been over-shadowed by former proprietor Didier Cuvelier’s splendid 1982. Ignore it at your peril. Showing light bricking on the rim, it delivers a wonderful nose of red plum, freshly-rolled tobacco, autumn leaves and a hint of cassis borrowed from Pauillac. It was actually richer than I recalled, and blind, I might guess the previous vintage. The palate does not disappoint. Now fully-mature, again, it is more opulent in style than you might expect, portending the richer style the estate has successfully pursued under consultant Michel Rolland. Beautifully balanced with a sensual, quite plush finish, this over-delivers. Drink it over the next decade. 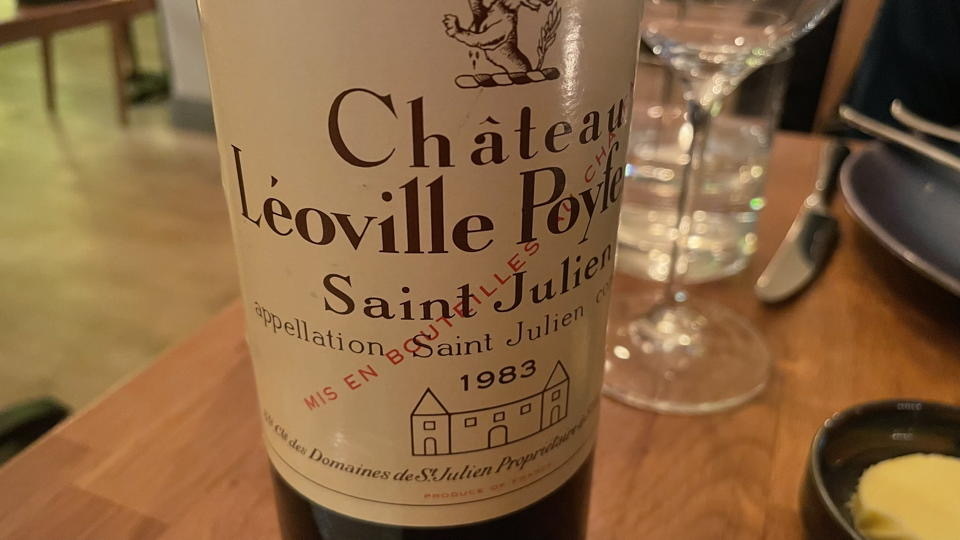 I took a punt and ordered a Monbazillac to accompany my dessert. Frankly, I wasn’t expecting much. However, the 2004 Haut Bernasse was a real treat. A blend of 85% Sémillon, 10% Muscadelle and 5% Sauvignon Blanc, the nose bursts with mandarin and quince, well-defined and belying its 18-years of age. The palate has just the right amount of viscosity, hints of marmalade and orange pith, rhubarb touches surfacing towards the finish. I had to resist ordering another cheeky glass. 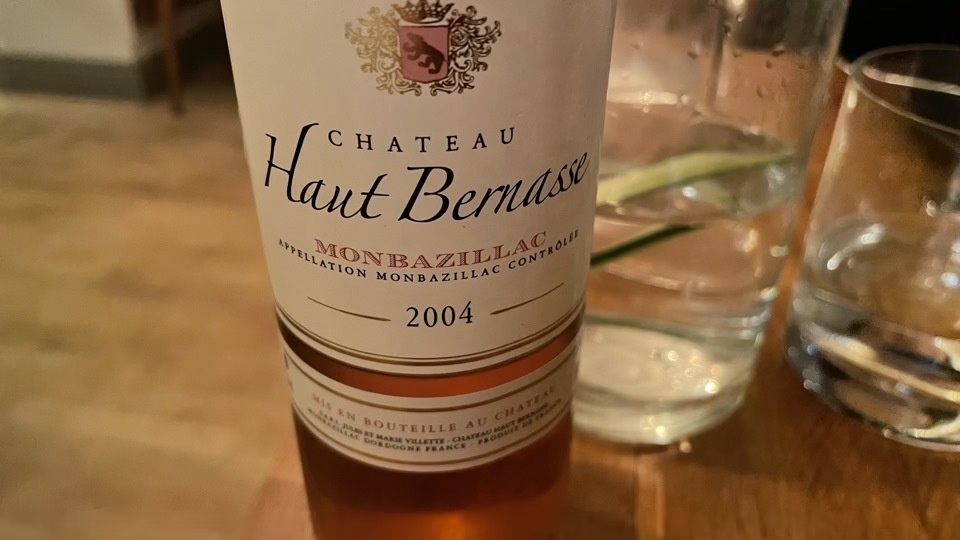 The Parson’s Table delivered everything I wanted for a small, unfussy but memorable birthday dinner. Service from Liz Parsons and her front of house team was friendly and efficient. Funnily enough, when I posted a couple of photos on Instagram, a few locals got in touch confirming that it is a local favourite. If you happen to be down in West Sussex, then do yourself a favour and book a table, then tour the castle afterwards.