Seattle is one of my favorite culinary destinations, based in no small part on its bounty of exquisite seafood. The city’s restaurant scene is dynamic, largely casual, and endlessly creative. I have had several of my most memorable meals within its watery bounds. Considering the rate at which new restaurants open, I typically rely on personal recommendations, though this time I turned to the recent list of James Beard nominees for assistance. When I saw that Rock Creek’s chef Eric Donnelly was up for Best Chef: Northwest, I steered my party that way.

Rock Creek’s interior is gorgeous, rustic and airy with a glass garage door that slides completely open when the notoriously cranky weather permits. Multiple wall-sized photographs depict the sort of rivers and stony streams evoked by the restaurant’s name. A series of small, closely spaced wooden tables and low lighting emit a relaxed and informal vibe.

The menu is extensive and almost completely dominated by seafood and shellfish. Only two dishes, located in their own separate section way down at the bottle of the menu, featured proteins that were raised on the land, not the sea. Though there were eight different (seafood) entrees, the vast majority of the menu was dedicated to small plates and appetizers, all of which were perfect for sharing. As I was fortunate enough to be eating with four diners as enthusiastic as myself, we ordered an impressive selection of small plates, a handful of entrees, and split everything.

Without exception, all of the fish and shellfish were cooked to perfection, and tasted freshly fetched. My only complaint would be that many of the dishes were a tad busy, featuring intensely flavored ingredients that occasionally overwhelmed the flesh of the fish. Often, the more elaborate preparations were brilliant in their complexity, but a handful were simply out of balance. Among the highlights were the cauliflower appetizer, sardine salad, brandade, tuna crudo, and petrale sole. 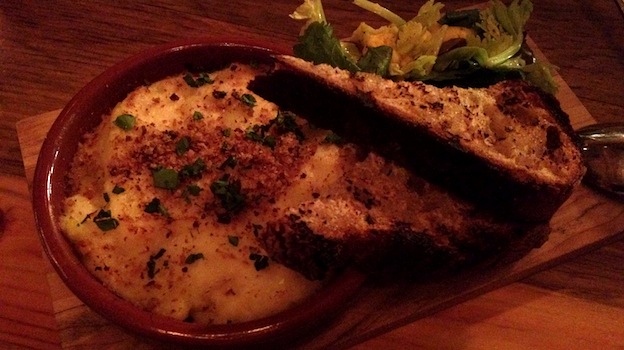 The cauliflower dish was subtle and fresh, with a touch of heat from the chiles and a perfectly nutty crunch from the pine nuts and faro. The Sardine preparation was elaborate but delicious, with the mint and the basil providing the perfect counterpoint to the slightly salty, oily sardines and rich eggplant. Brandade is always a favorite of mine, and this was one of the best I’ve had. The bits of pickled cauliflower and olives provided little bursts of flavor, and the perfectly thick bread was grilled to perfection. The Petrale Sole was wonderfully light and airy and the setting of bacon, lentil, grilled leeks, poached egg, and mustard beurre was dark and savory without ever being heavy or overwhelming. 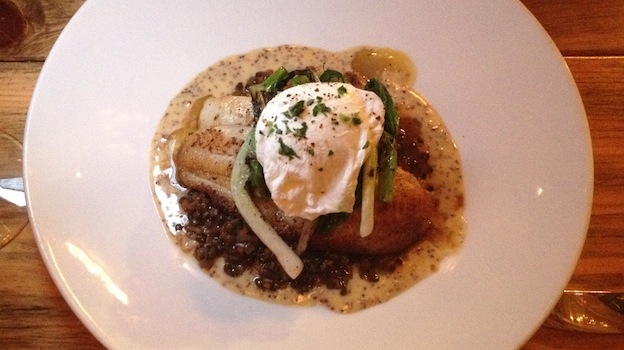 The calamari was cleverly packaged in a ‘Kari Out’ to-go box and served with chopsticks. I had the first bite and it was heavenly—the squid was just barely fried, very tender with a subtle crunch, and the sauce was sweet but complementary. It was divine. Unfortunately for my companions, the portions served from the bottom of the box were drowning in the sauce, which masked the perfection of the squid. The black cod was also promising, but as with the squid suffered a bit from the intensity and sweetness of the broth.

Occupying only the backside of their paper menu, Rock Creek’s wine list is small but well chosen. Though the red selections number nearly as many as the white, they err smartly towards the lighter side, as befitting the fare.  A handful of local wines are featured, but the list is primarily European, with a special emphasis on Italy and France. It is also remarkably well-priced, with very few bottles cresting $100, and the majority at or under the $50 range. We purchased two bottles off their list and brought in two (the max they allow) from a friend’s cellar, in order to drink some older vintages. 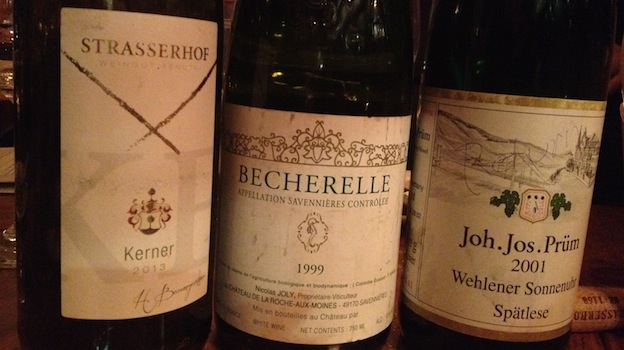 Strasserhof’s 2013 Kerner (off their list at $54) from Italy’s Alto Aldige was a terrific start to the meal; its vibrant acidity woke up our palates and got us more than ready to eat. Straightforward and refreshing, the Kerner offered a zesty mouthful of limejuice, lemongrass, shiso leaf, and papaya. Though the dominant thrust of the wine was upwards, the palate had a welcome density of fruit, which provided an anchor for the otherwise bracing acidity. Beneath said fruit was a granitic, slightly saline mineral quality that increased perceptibly throughout the long, lovely finish. At $54, this delicious white was an solid value.

Though we would have typically served the sweeter Riesling after the aged Chenin Blanc, when the cauliflower dish hit the table, we knew we needed the Prüm. The 2001 Wehlener Sonnenuhr Spätlese was a gorgeous, charming, and voluptuous wine whose sweetness seemed more in line with an Auslese than a Spätlese. It opened with a slight whiff of diesel, which was the only indication of age in this otherwise exceedingly youthful wine. The nose was a complex combination of white flowers, golden apple, chamomile, and clover honey. As the wine warmed and had some time in air, a tantalizing fig/date aroma began to develop. On the palate it was caressing, almost oily in texture, but held aloft by strong, lifting acidity. Aside from the cauliflower, sardines, and octopus, however, the wine was too sweet to work with the majority of our food.

Nicolas Joly’s 1999 Savennières Becherelle was, quite simply, the wine of the night. Unsurprisingly, it was quite funky when first opened, with a somewhat off-putting wet and musty odor. A little time in air, however, and that odd aroma cleared right up. In fact, the wine’s transformation was so remarkable, that I deeply regretted not having decanted it ahead of time. Boasting a slightly orange, semi-hazy hue, the Becherelle offered scents of golden kiwi, sweat, cut hay, gasoline, and a baked apple aroma that veered towards cider. On the palate it was remarkably clean, fleshy and inviting, with a mature, slightly oxidative edge, endless depth, and a pronounced mineral tang. Though the mouthfeel was warm and full, the acidity was so lively that the wine practically moved. It saved the cod, which was a disaster with the Prüm, and was an especially brilliant match to the petrale sole, keying off the mustard notes to great effect. 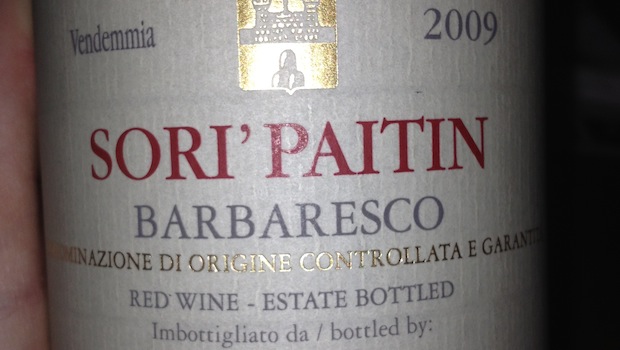 For no other reason than that we wanted to continue talking, we ordered the Paitin 2009 Sori’ Paitin Barbaresco, which functioned as our rather unconventional after dinner drink. Listed at $90, this wine was an utter delight to drink, even without food. Being rather young, it offered an irresistibly charming mouthful of bright and sappy red fruits underlain by a persistent, brickish sanguine tone. The buoyant fruit was balanced by a rather serious structure composed of ripe but tugging, dusty tannins and a fine acidity. With air, the wine revealed marvelous notes of savory herbs, cracked pepper, brown spices, iron and mint.