Philipponnat’s Clos des Goisses is one of Champagne’s most distinctive wines. Capable of aging effortlessly for decades, Clos des Goisses has built an enviable track record of successes, since it was first produced under the leadership of Pierre Philipponnat in 1935. Single-vineyard (parcellaire) Champagnes are all the rage today, but that was hardly the case eighty years ago.

Timing, they say, is everything. I was thrilled to be in San Francisco precisely on the day the Rare Wine Co. hosted this incredible tasting/dinner back to 1952 with Charles Philipponnat, because it was through Clos des Goisses that I was first introduced to the pure joy of fine, aged Champagne. With one exception, all of the bottles in this tasting were disgorged within the last few years and were sourced directly from the Philipponnat cellars. Charles Philipponnat explained that dosage was kept at 4.3 grams per liter for the sake of consistency. A handful of vintages were tasted from magnum, a magical format for all wines, but especially for Champagne, the only wine where the bottle is both a fermentation and an aging vessel.

Located on the slopes of Mareuil-sur-Aÿ, Clos des Goisses is a dramatic, south-facing site with inclines that approach 45 degrees. The soils are rich in chalk, which gives the wine much of its signature energy and overall tension. According to Charles Phillipponnat, ripeness in the Clos easily reaches a good 1.5% more than is common throughout Champagne, as the walls serve to trap the heat. The combination of southern exposure, chalky soils and warm microclimate yield powerful yet vibrant Champagnes of rare distinction. When Clos des Goisses is young, it is often intensely mineral, but as it ages, the textures become rich, mellow and vinous. In the very best years, Clos des Goisses matures gracefully and retains an aura of timelessness that is utterly mesmerizing. 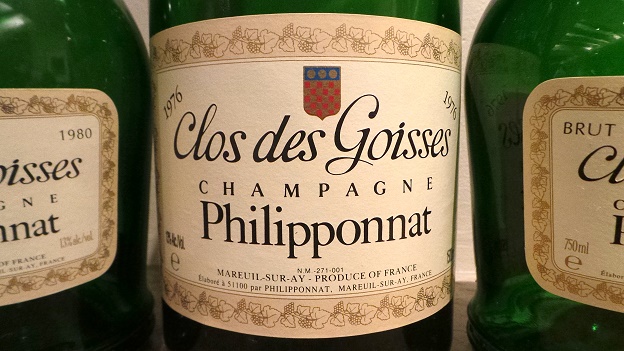 Clos des Goisses began its life as a Chardonnay-based Champagne, but since 1964 the blend has favored Pinot Noir. In most vintages Clos des Goisses is around 65% Pinot Noir and 35% Chardonnay. Over the years, winemaking has naturally evolved quite a bit. Up until 1988 Clos des Goisses was fermented in older barrels of assorted sizes. Between 1989 and 1998, the wine was made in a combination of enameled steel and new, smaller foudres. In 1999 and 2000, Clos des Goisses was done entirely in steel until 2001, when new 228-liter barrels were introduced for a portion of the wine. The 2001 was the first vintage made with temperature-controlled steel tanks. In 2004, Philipponnat moved into their new winery in Mareuil. During this time, oak fermentation increased to 60-70% of the total blend, which is where things stand today. These changes and developments notwithstanding, what comes through most in this tasting is the singular, undeniable personality of Clos des Goisses.

The 2004 Clos des Goisses is dense and powerful in the glass, with all of the pure, unbridled energy that has always been such a signature here. Hints of lemon peel, mint, spice and crushed rocks emerge with time in the glass, but, despite its considerable beauty and unquestioned pedigree, the 2004 is frankly years away from delivering the full Clos des Goisses experience. Disgorged February 2013. 97/Drinking window: 2019-2054. The 2002 Clos des Goisses dazzles from start to finish. A huge, tropical Goisses, the 2002 pulses with exotic, tropical fruit wedded to a real sense of textural vinosity. Honey, almonds and yellow stone fruits are some of the many notes that blossom in the glass. The 2002 is just entering the very early part of its plateau of maturity, but it will continue to develop further nuance over the next 20-30 years. The level of complexity and overall sumptuousness make the 2002 nearly impossible to resist today. Disgorged November 2011. 96/Drinking window: 2015-2052.

Philipponnat's 2000 Clos des Goisses is an excellent choice for drinking today, as there is less upside than in some of the other surrounding vintages. This is a distinctly savory Goisses with more than enough phenolic weight and richness to support many years of cellaring, although I do not expect to see a lot of improvement from here. Hints of sage and mint add nuance on the close. The 2000 is a beautiful and highly expressive Goisses, but its place in the hierarchy of vintages is quite apparent in this epic tasting. Disgorged October 2009. 94/Drinking window: 2015-2040. One of the all time greats from Philipponnat, the 1996 Clos des Goisses captures the essence of a vintage in which both sugars and acidities were elevated. Tension, energy and salinity are the signatures. Readers who can wait on the 1996 will be rewarded with a stunning bottle of Champagne that will likely still be profound at age fifty. Disgorged February 2006. 96/Drinking window: 2016-2046. 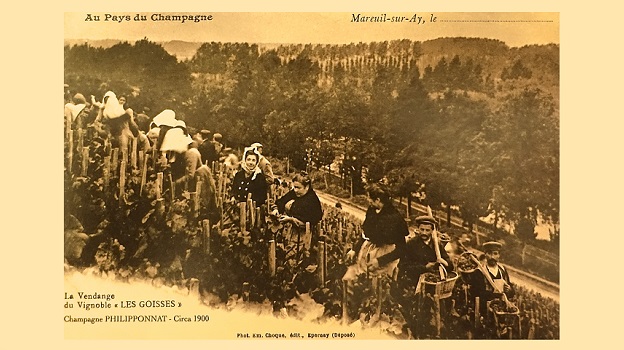 Almonds, candied lemon peel, wild flowers, chamomile and spices are some of the notes that emerge from Philipponnat's 1995 Clos des Goisses. Layered and subtle in the glass, the 1995 is also a bit more forward than some of the other vintages in this tasting. As such, it is an excellent choice for drinking now and over the next 15-20 years or so. Stylistically, the 1995 doesn't quite have the energy or thrust of the very best years. Disgorged February 2012. 93/Drinking window: 2015-2030. A last minute addition to this tasting, courtesy of a dear friend, the 1992 Clos des Goisses is a towering masterpiece. It's as simple as that. Huge and exotic on the palate, the 1992 is the first wine in this tasting that shows what mature Goisses is all about. The flavors are intense and Pinot dominated, while the sense of phenolic weight is impossible to miss. This is the essence of Clos des Goisses. 97/Drinking window: 2015-2042.

The 1990 Clos des Goisses is shockingly vibrant for a wine of its age. Then again, that's Goisses. Distinctly Riesling-inflected, mineral notes meld into mint, graphite and stone fruits in an explosive, viscerally thrilling Clos des Goisses that brings this flight to a rousing finish. Still a baby, the 1990 will reward those lucky enough to own it with decades of sublime drinking. Disgorged January 2010. 97+/Drinking window: 2015-2040. Interestingly, the 1989 Clos des Goisses (magnum) is not too different in style from the 1990, although the magnum format and late disgorgement surely play roles in that. Here, too, the overall impression is one of crystalline purity, power and energy. This is another wine with a long and distinguished future ahead of it. Disgorged January 2010. 96/Drinking window: 2015-2039.

The 1983 Clos des Goisses is in a beautiful spot where the flavors and contours have softened and now offer some insight as to the allure of mature Goisses. Honey, caramel, almonds, lemon oil and chamomile meld together in an open, beautifully resonant Clos des Goisses to enjoy now and over the next decade or so. Disgorged November 2011. 95/Drinking window: 2015-2025. A wonderfully complete wine, the 1980 Clos des Goisses has it all. Here the Pinot is quite expressive in both the wine's flavor profile and weight. Rich, powerful and vinous, the 1980 is also a great example of how Goisses ages. I have always been partial to this vintage, as 1980 was the first Clos des Goisses I tasted. Today, many years later, it's great to see the wine is still in great shape. Although the 1980 won't hold on forever, it drinks beautifully today and should continue to deliver considerable pleasure over the next decade or so. Disgorged February 2007. 94/Drinking window: 2015-2025.

What can I say about the 1976 Clos des Goisses? A monumental, eternal Champagne, especially from magnum, the 1976 is simply breathtaking. Precise, explosive and creamy on the palate, the 1976 is absolutely exquisite from start to finish. Layers of fruit continue to build to the huge, almost overwhelming finish. On this night, there are a lot of highlights. The 1976 is without question one of them. Disgorged January 2010. 97/Drinking window: 2015-2035. It's fascinating to taste the 1975 Clos des Goisses next to the 1976, as both wines hail from one of the Golden Eras in Champagne, and a period of time in the history of Champagne I have personally long had an affection for. Whereas the 1976 is quite extroverted, the 1975 is all about subtlety and finesse. Silky and caressing throughout, the 1975 perhaps has a bit less potential than the 1976 for the future, but it is nevertheless compelling. Hints of lemon oil, pear and white flowers add the final layers of nuance. Disgorged June 2009. 94/Drinking window: 2015-2030. 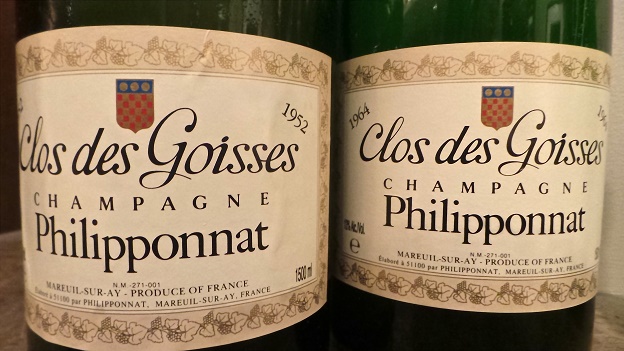 The 1964 Clos des Goisses (magnum) is arguably the most compelling wine on a night filled with historic, magnificent vintages. A profound Champagne, the 1964 is timeless. The flavors are mature, as one would expect from a wine of this age and era, yet there is a fabulous sense of freshness throughout. Apricot, spice, brioche and almond are some of the nuances that open up in the glass, but the 1964 can't be described in terms of its flavors, rather it is a wine of sublime textural finesse and magnificent complexity. How long will the 1964 last? I hope to taste it again in a few years for a follow up report, let's leave it at that. The 1964 is an important vintage for Clos des Goisses, as it is the first in which Pinot Noir takes the leading role. Previously, Clos des Goisses had been more Chardonnay than Pinot. Disgorged March 2008. 98/Drinking window: 2015-2030.

Another utterly captivating wine, the 1952 Clos des Goisses (magnum) presents an alluring mélange of ash, game, tobacco, smoke, wild flowers and dried apricots, all in the rich, vinous style that exemplifies mature Clos des Goisses. Layers of flavor build to a huge, effortless finish built on pure resonance. This is another wine that simply defies age. The 1952 is naturally more mature in its flavors than the 1964 tasted alongside it, but it is every bit as compelling. Indeed, readers who enjoy fully mature Champagnes might very well prefer the 1952. This is just about as good as it gets. Disgorged September 2008. 96/Drinking window: 2015-2022.