Pavie-Macquin is one of the great success stories of Saint-Émilion. This retrospective going all the way back to 1928 provided a remarkable opportunity to witness the evolution of the property from underachiever to superstar, with all of the highs and lows that invariably accompany an extensive vertical that spans epic, average and challenging vintages. For the occasion, estate manager Nicolas Thienpont and consulting oenologist Stéphane Derenoncourt gathered every wine they have made at Pavie-Macquin, with a few surprises thrown into the mix. 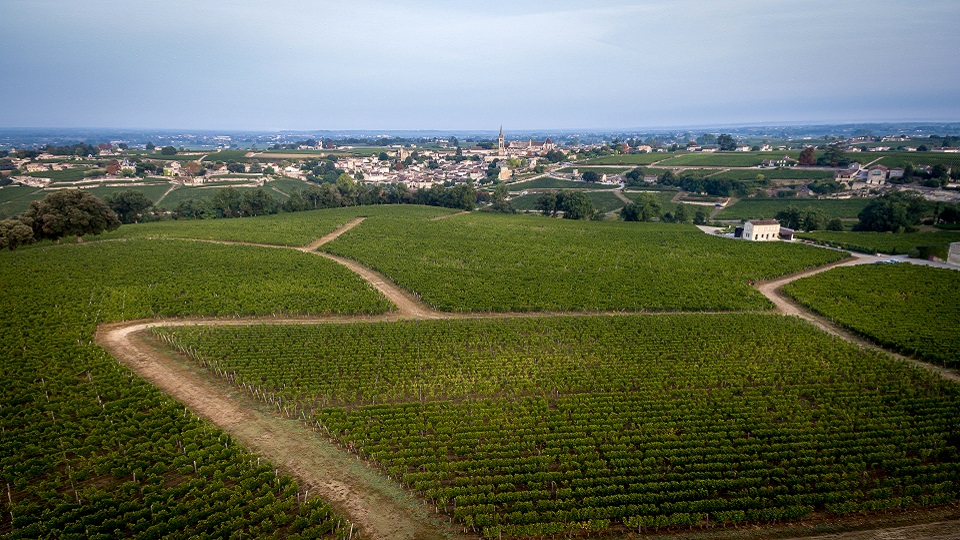 Pavie-Macquin with a landscape view of Saint-Émilion in the background.

Albert Macquin founded the estate that bears his name in the late 1880s. A leading figure of his time, Macquin was an agronomist and viticulturist who popularized the revolutionary technique of grafting vines onto American rootstock as the phylloxera epidemic ravaged the vineyards of Europe. Macquin is widely credited for saving Saint-Émilion and noted for his research on soils, rootstocks and grape varieties.

Macquin acquired La Serre (9 hectares), part of Pavie-Pigasse (6.30 hectares), Peygenestou (5 hectares), Pavie-Chapus (3.72 hectares) and a number of smaller parcels totaling about two hectares, all in Saint-Émilion’s famed Pavie lieu-dit, to create Pavie-Maquin. At that time, the property had 26 hectares under vine. In the ensuing years, a number of parcels were sold off. The biggest of these was La Serre, which Macquin’s daughters sold sometime between the two World Wars. In 1945, the château exchanged a parcel for an access road with neighbor Troplong Mondot, something that is hard to imagine in today’s world. These transactions created Pavie-Macquin as it stands today, with its 15 hectares under vine.

Macquin passed away in 1911 and left the estate to his daughters, Marie-Louise et Andrée, who married brothers Antoine and François Corre, with Antoine managing the property. For most of its life, though, Pavie-Macquin has been run by outside managers, as is quite common in Bordeaux. Today, the estate is owned by Albert Macquin’s grandchildren and great-grandchildren. 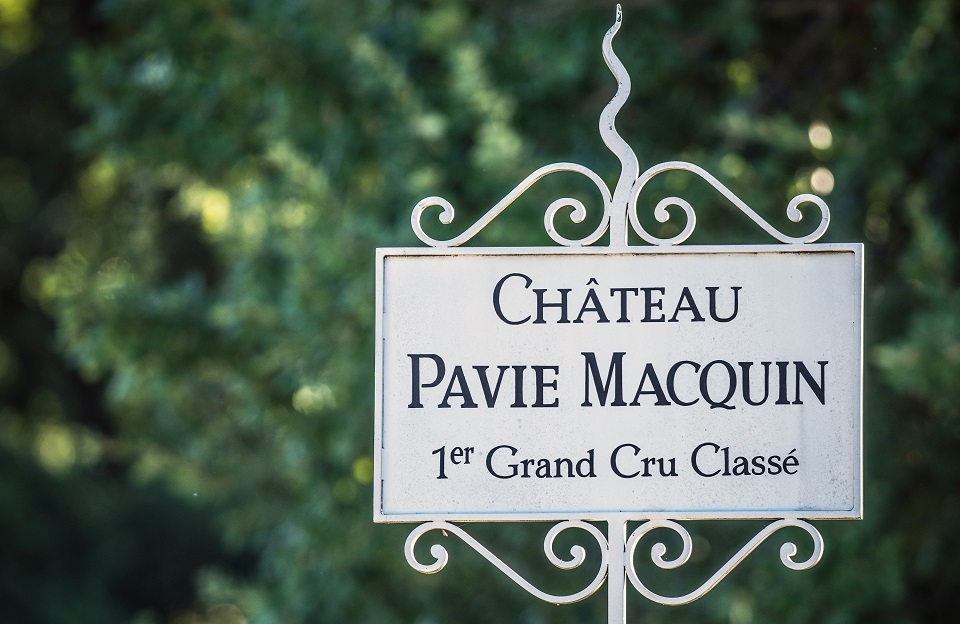 Pavie-Macquin was elevated to 1er Cru Classé in the Saint-Émilion classification of 2006.

A Magical Mix of Limestone and Clay

The soils are composed of variants of calcaiare à astéries (limestone soils of marine origin) and molasses, (a clay/limestone/sandstone mix), as shown in the vineyard map below. Of the 15 hectares, roughly 14 are used for the Grand Vin, while one hectare is usually used for the second wine, which is composed of Fongaban, Garenne and, depending on the vintage, Puits, as seen on the map. Varietal breakdown is 84% Merlot, 14% Cabernet Franc and 2% Cabernet Sauvignon. 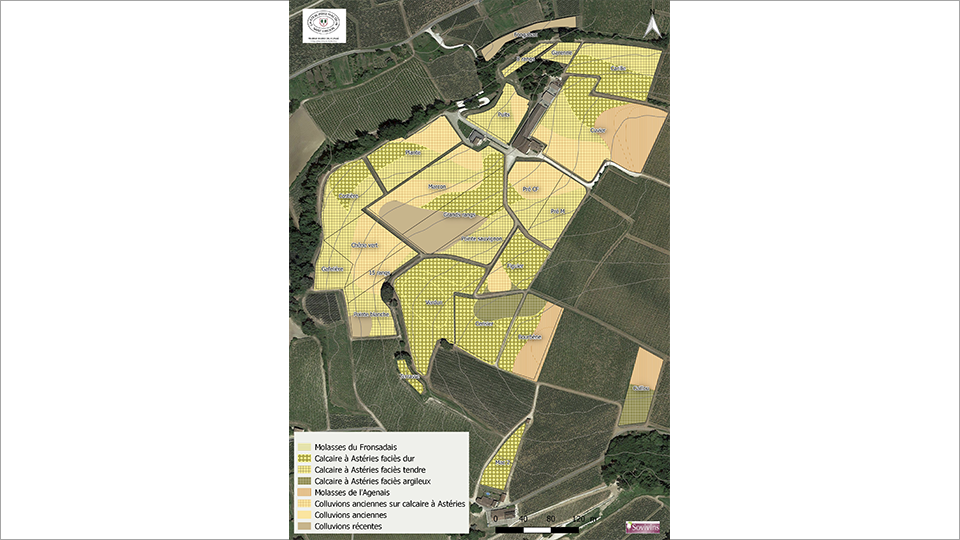 The present-day history of Pavie-Macquin starts in the mid-to-late 1980s. Maryse Barre was the estate manger at the time. She oversaw vintages 1986 through 1994 and introduced biodynamic farming as part of a plan restore the vineyard after a period of neglect. Mme. Barre’s son, Paul, employed a young cellar master, Stéphane Derenoncourt, at his Fronsac properties. In 1988, Derenoncourt began helping out at Pavie-Macquin before joining full-time in 1990. Derenoncourt’s success at Pavie-Macquin helped launch his career and made him a highly sought-after, superstar consultant. But those first vintages were not easy, especially the years spanning 1991 through 1994, all of which were marked by challenging weather conditions. Nicolas Thienpont succeeded Mme. Barre just after the 1994 harvest. The Thienpont family is among the most important in Bordeaux. Originally of Belgian origin, the Thienponts are highly regarded négociants and own a number of prestigious properties, including Vieux Château Certan, Le Pin and L’If, among others. 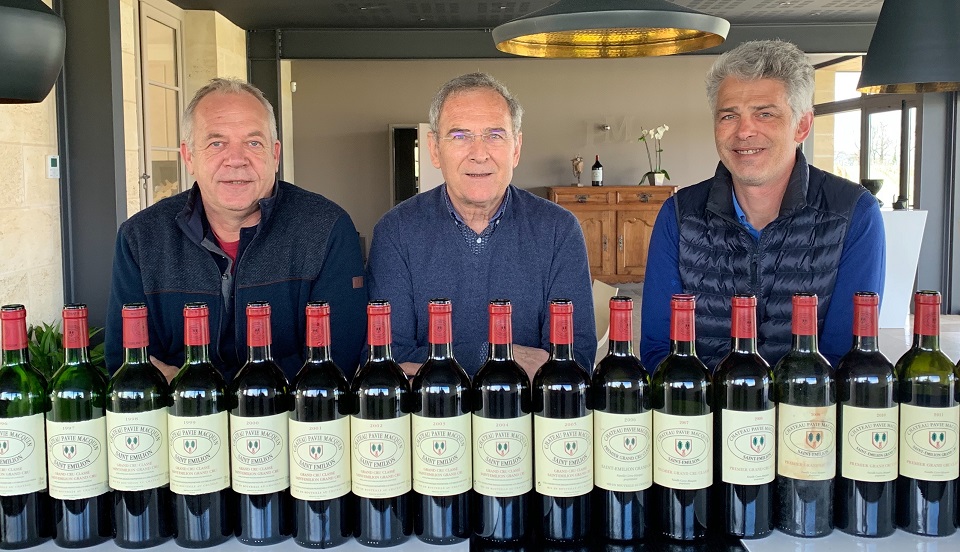 Stéphane Derenoncourt with Nicolas Thienpont, with his son, Cyrille.

These were bleak times for Pavie-Macquin. There was no sorting table and investment was lacking. At one point during this era, the château came close to selling two hectares of vineyards just to make ends meet. In 1995, a sorting table finally arrived. A few years later, the wines started to improve, most notably with the 1998, which remains epic. The first oak fermentation vats were acquired for the 2000 vintage, alongside the existing cement vats.Malolactic fermentation has always been done in oak. Indeed, one of my most memorable tastings at Pavie-Macquin was a parcel by parcel tasting from barrel years ago.  In the vineyard, one of the most important decisions Thienpont and his team have taken in redeveloping the vineyard is ensuring that the Cabernets are planted on the warmer, limestone-based soils rather than the cooler, clay-based terroirs.

Stylistically, the wines of the 1990s and 2000s carry the imprint of an era in which richness and concentration were prized above all else. By 2016, the wines show a pronounced move towards greater finesse, with less saignée and gentler winemaking overall. Today, new oak is around 50%, down from the 60-65% that was once common. 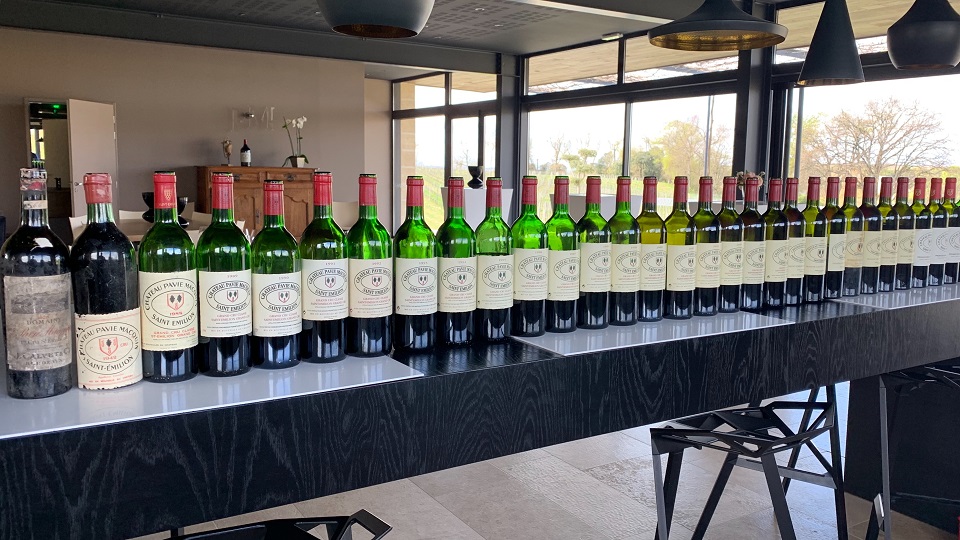 Some of the many wines in a retrospective going back to 1928.

One of the things I enjoyed most about this tasting was the decision to serve the wines in thematic flights rather than in chronological order. I do this often when we host our own retrospective tastings, but this was the first time I had seen a vertical at a winery organized in this manner. Thematic flights allow for wines from vintages with similar attributes to be grouped together and also keeps the palate fresh. And, of course, it is always illuminating to taste the reference-points side by side, irrespective of the eras in which they were made. All of the bottles were opened just as I arrived. I tasted through all the wines, wrote up my notes, and then revisited each wine. I was quite surprised to see how the wines responded to aeration, especially the fragile vintages from the late 1980s and early 1990s, all of which showed better with several hours of air. Most importantly, readers will find a number of jewels in this vertical. Top vintages often elicit much enthusiasm in Bordeaux. That can lead to high prices and disappointment when wines don't meet expectations. To be sure, 2010 and 2016 are two wines that are well-deserving of their status. On the other hand, I expected more from the 2000, 2005 and 2009. There is so much joy to be found in vintages that get lost in the hype surrounding more coveted vintages. These include the 2001, 2004, 2008, 2012 and 2014, all wines that are flat-out delicious. 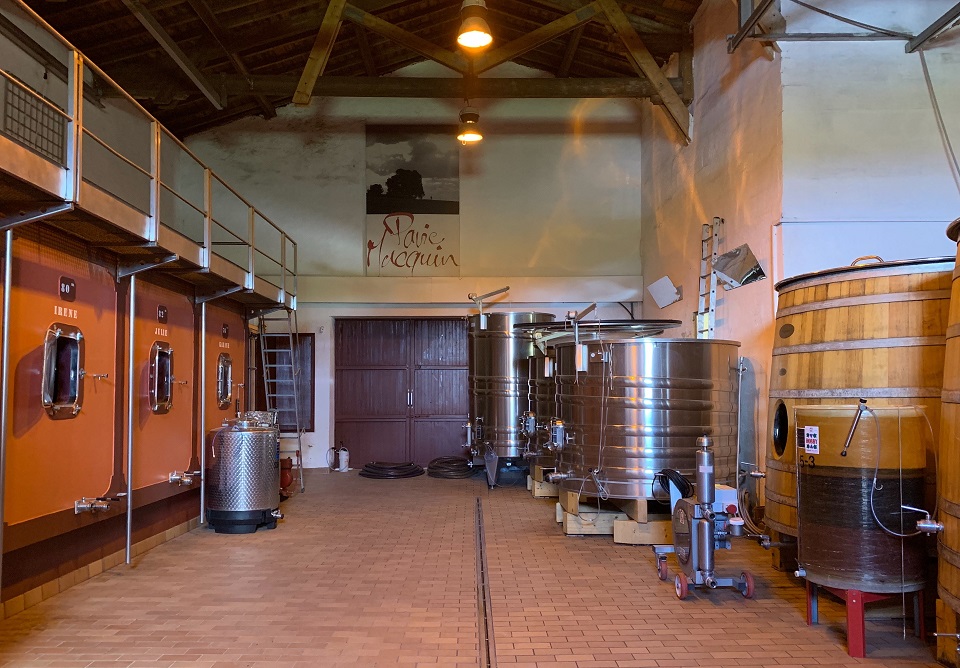 The cellars at Pavie-Macquin are cramped but highly functional. Note that the cement tanks are identified by historic names.

These four early vintages in Pavie-Macquin’s modern history are a reminder of how much things have changed in wine. Today, one poor vintage feels like an event. It’s hard to imagine four consecutive years of modest (at best) quality. These wines pre-date Nicolas Thienpont’s arrival at Pavie-Macquin. As such, they were made with very limited means. Of the four, the 1994 is the best although it has been far surpassed since then.

This grouping of three more current yet also challenging vintages is intriguing. The wines show much more depth than those of the previous flight, but of course they are much younger, so a precise apples-to-apples comparison is not really possible. Of the three, the 2013 is the most surprising.

This arc of vintages covers several important developments, including the arrival of a sorting table in 1995, the introduction of a second wine, Les Chênes de Macquin, in 1996, and the use of oak fermentations vats to complement cement in 2000. The most surprising wine in this flight is the 2004, which is really terrific. The 1997, 1999 and 2006 all show the positive impact of meticulous care in vintages that present challenges.

This flight has two under-the-radar gems: the 2012 and 2014, both of which are excellent choices for at least medium-term drinking. The 2014 has an extra touch of depth and persistence over the 2012, but both wines are undeniably attractive. Firm tannins mark the 2011, as they do so many wines of the vintage. The 2017 was in fining at the time of this tasting, but the bottled wine has turned out beautifully. 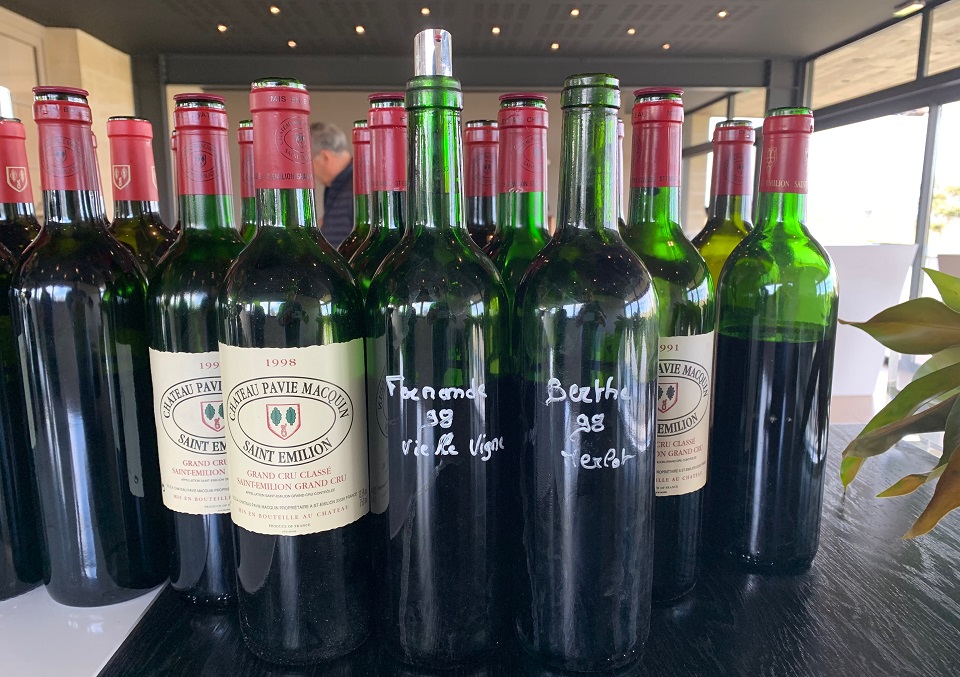 The 1998 is a highlight in this tasting, as are the two parcellaire wines Pavie-Macquin bottled.

I am not sure if there was a theme to this flight, but the five wines are all intriguing, for different reasons. The 1988 was the first wine at Pavie-Macquin Stéphane Derenoncourt worked on. A decade later, Derenoncourt and Thienpont made one of the estate’s modern-day classics in the 1998. They also bottled two parcellaire selections, the Ferdinande Vieilles Vignes and Berthe, from limestone and clay soils respectively, that were never commercially released. The Ferdinande shows just how magical Saint-Émilion’s limestone plateau is. The 2001 is another dark horse vintage in this vertical, a wine from a rarely mentioned vintage that delivers the goods.

One of the benefits of thematic tastings is the ability to compare benchmark vintages side-by-side. The 2008 is the real surprise. A long season and late harvest yielded a Pavie-Macquin that is truly sublime. In 2016, we see the first vintage that reflects a move towards gentler winemaking, with less extraction and greater finesse. The 2005 is the only wine in this flight that leaves me wanting for more, as the tannins are decidedly tough. 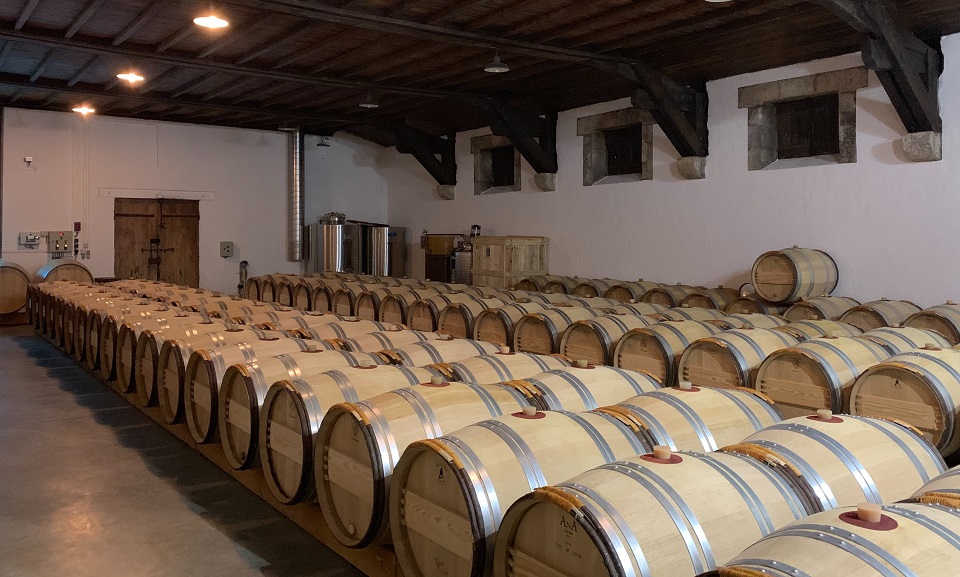 One of the barrel rooms at Pavie-Macquin.

In this flight we see the change of management from Maryse Barre to Nicolas Thienpont. The 1989 is clearly the finest of the Barre era wines in this tasting, while the 1990 and 1995 are wines of transition. The 1990 is Stéphane Derenoncourt’s first vintage as full-time cellar master, while 1995 is the first harvest Thienpont looked after from start to finish.

Flight eight takes us back to warm, sunny vintages. It is my least favorite set of wines in this vertical. The combination of hot, dry years and the approach to farming and winemaking yields a style that favors opulence, but loses energy and detail. The 2015 is the exception to that, but it is very hard to read in this tasting. 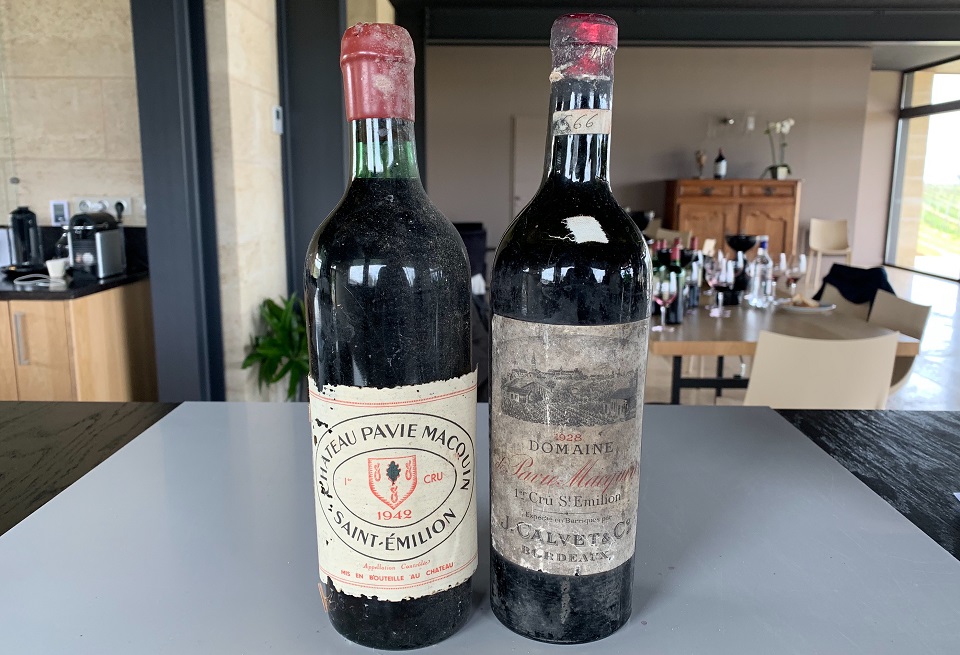 There’s not much to say about this flight except that the wines are just magical. Both wines emerge from periods in which the château’s history is nebulous. Obviously the 1942 was made during World War II, which in and of itself is pretty remarkable. The 1928 lives up to the reputation of the vintage for long-lived wines. It is truly magical, and a real treat to taste. It is also the perfect wine to close out this vertical.

I tasted all of the wines in this article at Pavie-Macquin in April 2019.