All Sauternes wines taste nice. I am not being facetious. The mellifluous texture and the sweetness at the core of every bottle tickle the senses into submission, and it becomes difficult to examine strengths and weaknesses when you are being so blatantly seduced. It’s like critiquing a litter of cute, yapping puppies one by one. The only way to do it is to compare the wines together in a single flight, preferably blind. I do that regularly, and over the years it has prompted me to mete out harsh words toward Château Filhot. In blind tastings I discerned that Filhot often lagged behind its peers in terms of concentration and complexity. So when I had an opportunity to visit the historic estate for a tour and a vertical tasting, I wanted to discover more and find out whether my reservations were well founded. 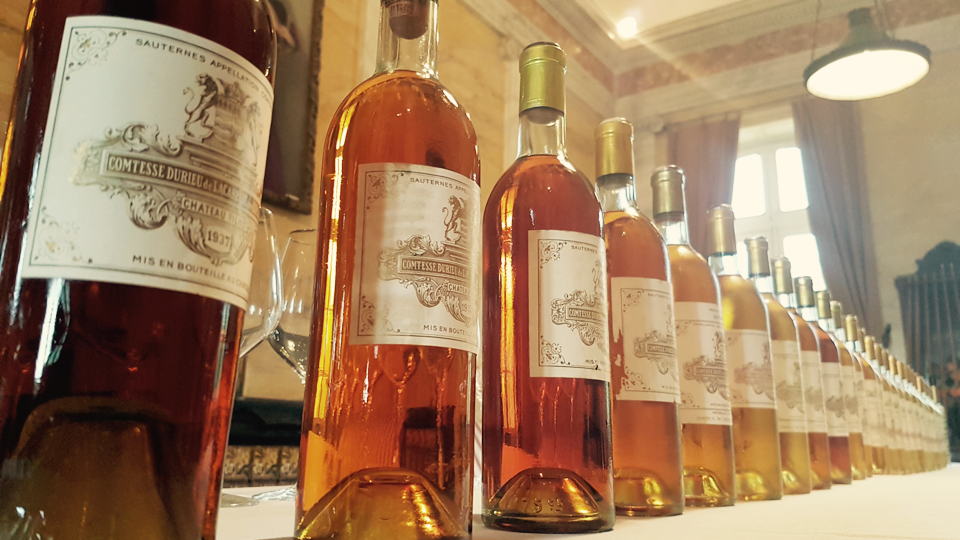 The origins of Filhot go back to the early 17th century, when vines purportedly occupied the present location. The château was constructed in 1709 by Romaine de Filhot, whose family owned a Sauternes estate known as Verdoulet (Thomas Jefferson was one of its early admirers). The French Revolution saw the proprietor of Filhot guillotined, though his daughter Josephine de Filhot successfully negotiated the return of the property to her family. This was quite an achievement given that she was married into the Lur Saluces dynasty, owners of Château d’Yquem and symbolic of the very landowners that the Revolution was supposed to rid the country of. Josephine's son Romain-Bertrand de Lur Saluces amalgamated the Pineau du Rey vineyard, enlarging Filhot to around 120 hectares, and rebuilt the château in 1845. The architect was Pierre-Alexandre Poitevin, whose design David Peppercorn MW describes as a "neo Louis XVI extravaganza." It is certainly one of the grandest anywhere in Bordeaux: double-winged, with an ornate fountain in the center of the courtyard. Inside is a maze of corridors and annexes so extensive that I had to mentally record my way to the toilet in order to find my way back. Louis-Bernard Fischer designed the English-style garden; his green-fingered handiwork can also be seen in the Jardin Publique in Bordeaux city. Today, lakes, forests and pasture occupy a majority of Filhot’s extensive grounds.

In 1855 Filhot was classified as a Second Growth. For some peculiar reason, after this the wine was labeled “Château Sauternes.” Why give your wine such a generic name when it is Filhot that consumers are familiar with? Fortunately, in 1901 the name reverted back to Château Filhot. Following the ravages of phylloxera, some estates never really regained their former glory once regrafted onto American rootstock, and this is arguably the case with Filhot. The vineyard began to decline, and by the 1930s it had withered down to 20 hectares. In 1935 the Comtesse Durieu de Lacarelle, the sister of Bertrand de Lur-Saluces, bought Filhot from her brother and began to reconstitute the vineyard. Her eldest son, Comte Henri de Vaucelles, took over the running of the property in 1974. He came from an industrial background and by all accounts was almost overwhelmed by the enormity of running such a large and demanding estate. Perhaps his background instilled the idea of quantity over quality; yields during this era were known to be high. In addition, de Vaucelles aged only a small proportion of his crop in barrel and tended to chaptalize a great deal. Gabriel de Vaucelles, one of Henri’s five children, joined in 1996 and still manages the estate today. He made much-needed improvements by replacing the fiberglass vessels with stainless steel vats, using native yeasts, extending the length of barrel maturation and using around one-third new oak.

Filhot is a charming estate. Aesthetically, the interior looks as if the clocks stopped between the two world wars: there are timeworn oak-paneled walls, ornate cornices, marble fireplaces, art deco mirrors, countless oil portraits of ancestors, and antique furniture that must have been in service for generations. One anecdote: Later in the evening, we asked for the heating to be turned up. A leviathan machine was wheeled in to blast out warm air. I wondered whether it had been built in the 1930s. It was just so unexpected, yet added to the quirkiness of the château. 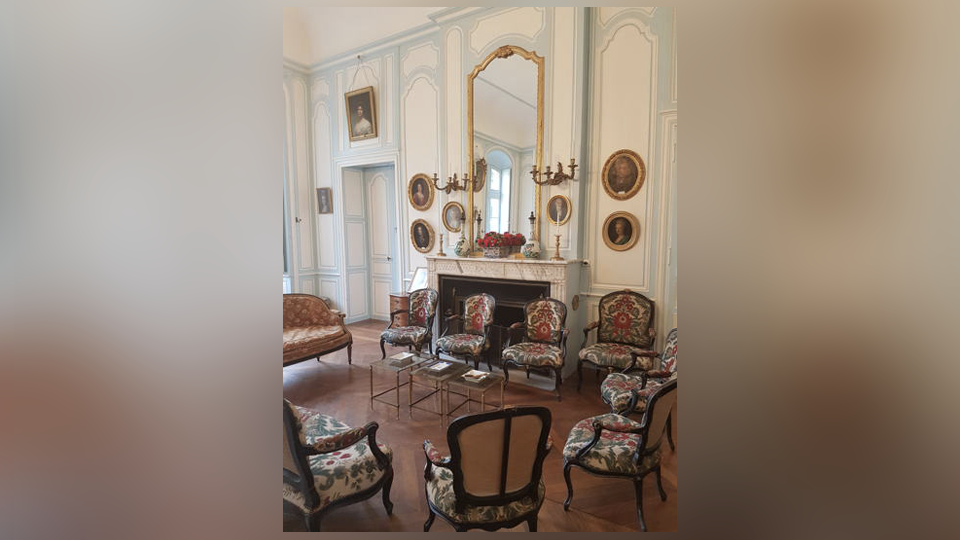 The reception room at Filhot where the tasting was conducted

Château Filhot is an enormous property even by Bordeaux standards, covering some 330 hectares – just under half the size of the entirety of Pomerol. The vineyard comprises 62 hectares of vines located on south- or southwest-facing slopes. The soils are gravel mixed with clay and sand over porous limestone bedrock. The Ciron River traverses the vineyard and helps create a foggy atmosphere ideal for botrytis formation. The grape varieties consist of 60% Sémillon, 36% Sauvignon Blanc and 4% Muscadelle, planted at around 6,000 vines per hectare and pruned simple Guyot and à Côt. Vines are located in close proximity to the pine trees of the Landes forest, which makes them susceptible to frost.

As is normal in Sauternes, the harvest team undertakes several tries (passes) through the vines in order to handpick suitably botrytized berries. There is a Chinese proverb by 3rd-century poet Liu-Ling inscribed above the vat room door: Le vin est un noble maître, pour qui le ciel et la terre ne sont qu’un matin, pour lequel l’éternité n’est qu’un instant (“Wine is a noble master for whom the heaven and the earth are only morning, for which eternity is only a moment”). The bunches are pressed and then fermented in stainless steel tanks for between two weeks and one month, the temperature held between 19°C and 21°C. The wine is then transferred into the barrel cellar for maturation over 20 to 24 months in around one-third new oak before bottling. 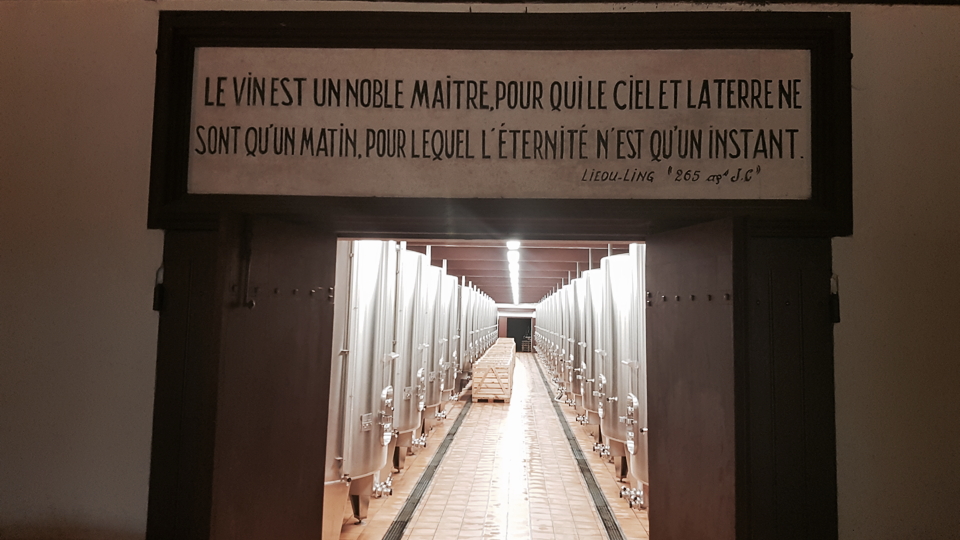 The vat room at Château Filhot

Filhot is the most southerly wine estate within the commune of Sauternes and has traditionally made a drier style utilizing a higher proportion of Sauvignon Blanc. Indeed, for many years the estate produced a dry white wine, although I have never tasted it myself. Having read this far, you may already be thinking that the estate’s glory days lie in the 19th century, and there is a great deal of truth in that. Perusing my notes over the years, Filhot rarely meets expectations, and I am not the only person with that view.

I absolutely adore Sauternes. It gives me no pleasure to put a wine down, and nothing would give me more pleasure than to find that my previous caustic words were unfounded. However, the truth is that there are just too many fair-to-middling Filhot wines. The estate's reputation is tarnished by benevolent Sauternes vintages when it missed the chance to reinstate its position as one of the leading Second Growths. Vintages such as 1983, 1997, 2001, 2005 and 2007 feel ephemeral and inconsequential; you yearn for more complex aromas, more body, more richness and depth. Where is the substance? Where is the persistence? Sauternes should make an impact; it should linger in the mouth after the wine has departed. There are a few vintages that give glimmers of hope for Filhot, such as the 2009 and 2011, and if we wind back the clock, I admire the 1937, 1986 and 1989. But they are not enough to change my opinion. 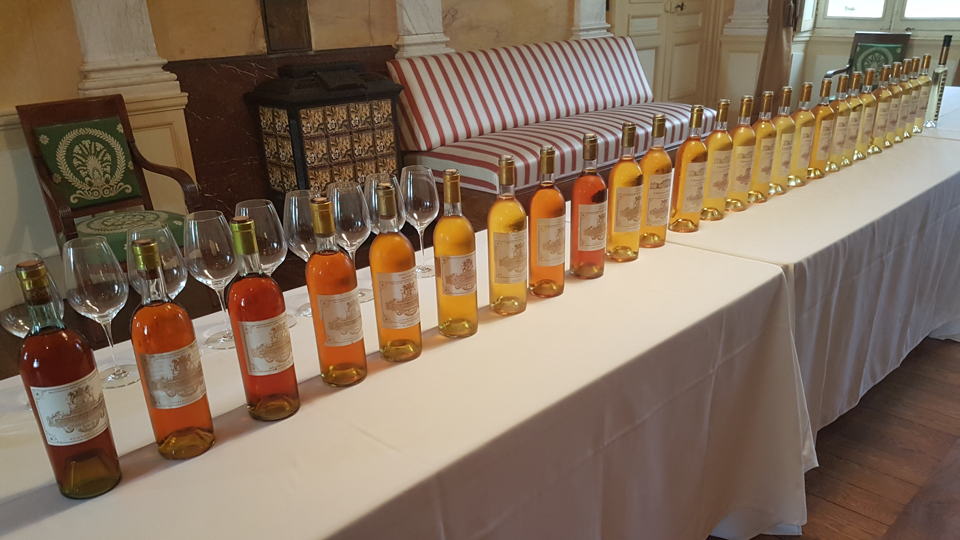 After visiting Filhot and marveling at its grandeur and size, I could instantly see that it is, quite simply, just too big. A family running an estate of this size is responsible not only for producing wine, but also for maintaining the buildings and keeping the property habitable when it could so easily fall into disrepair. They face huge running costs at a time when the market for Sauternes is dwindling, so they must surely look at alternative sources of income. I suspect the family does not have the deep pockets of a proprietor like Silvio Denz at Lafaurie-Peyraguey, which the Swiss entrepreneur has transformed into a luxury hotel and restaurant. Instead, Filhot reflects the real challenges confronting Sauternes. This part of Bordeaux attracts few tourists compared to the rest of the region, and it would cost millions to revamp the estate – and all this against a backdrop of a style of wine struggling to find an appreciative audience. 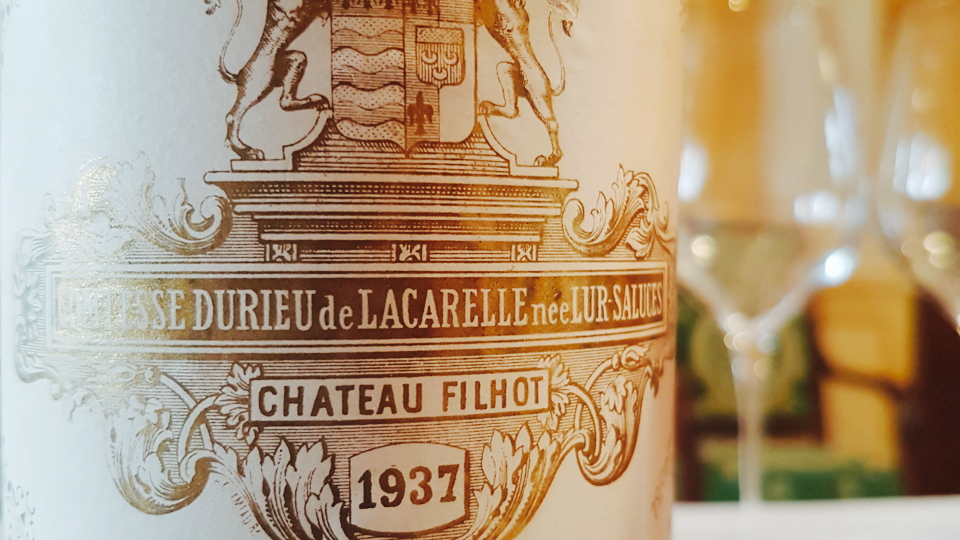 The pertinent question is whether Filhot can not only improve, but become more consistent. Perhaps lowering the percentage of Sauvignon Blanc and increasing Sémillon would lend more weight and density. Is that tinkering with the DNA of Filhot? It is a case of finding Filhot – not what it currently is, but what it could be, not only in terms of the wine but of the entire estate. I want to end on a positive note. Just before writing this piece, I participated in two blind tastings of the 2009 and 2015 vintages, and Filhot showed well in both. I let out a silent hooray. These were well-crafted and thoroughly enjoyable bottles of Sauternes at a consumer-friendly price. I hope this is a glimpse of the future and Filhot can turn the corner. It will not be easy, and I doubt they will ever return to the halcyon days of the past, but with a few changes perhaps this major estate can compete with the other Sauternes Second Growths.

A Century of Bordeaux: The Eights, Neal Martin, May 2018