It all started innocently enough with a few bottles of 2005 Bordeaux during lockdown. Then a few more, and then some more after that. Before I knew it I had tasted through a good number of the reference points. The wines were absolutely thrilling, just as I remembered from my last large tasting of the 2005s, about five years ago. One of my close friends suggested a comprehensive look back at the vintage, so here it is.

I was energized by the thought of a full immersion into the 2005s. Those first bottles were so magnificent. Could it be that the wines had finally started to shed some of the youthful tannin that was so prominent years ago? Then I looked at the market and realized that prices for many of these wines have been stable for a number of years, something that is all the more remarkable given what has happened with other collectible wines that have exploded in the last 5-10 years. Of course, the 2005s were priced high on release. I will get to that in a second.

One of the comments I hear often from readers is the challenge of buying fine, ageworthy, fairly priced wines in sufficient volume to adequately stock a cellar. That is very hard to do in some regions. Burgundy and Piedmont come to mind. Naturally, fine wines are not equal substitutes, but 2005 Bordeaux is a treasure trove for the consumer looking to build a cellar filled with superb wines that can be easily bought and enjoyed now, and that also offer terrific value in today’s world. Yes, some of the wines in this article are very expensive by any measure, but as so often is the case in Bordeaux, that really comes down to a pretty small subset of the whole. Personally, the older I get the more pleasure I find in humbler wines that overachieve, and there are plenty of those in this report too. Readers who own the 2005s should be absolutely delighted, as so many of them are fabulous now. 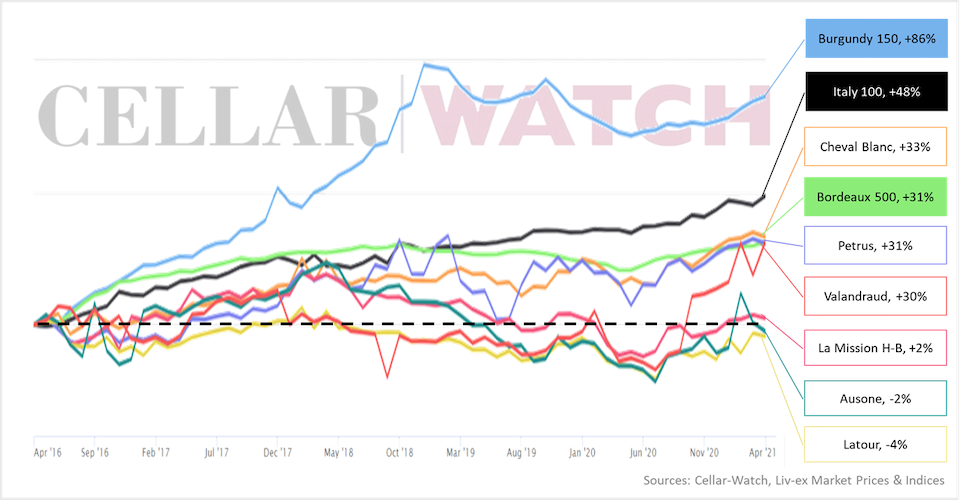 This chart looks at market prices for six of the top wines in this article over the last five years and compares them to three Liv-ex broad market indices.

The release of the 2005s coincided with a pretty special time in my life. My parents sold Bordeaux futures when I was in high school and college. That was my first introduction to the wines. In 2005 Robert Parker offered me a job at The Wine Advocate. I started to follow Bordeaux more closely and to taste far more widely just as the 2005s were being released.

Something else happened that was transformational for the wine industry. And that is the emergence of Burgundy as a region for super high-quality, collectible wines. Prices started to escalate rapidly and growers became cult-like figures. Driven by a combination of quality, scarcity and an artisan connection to the land, top Burgundies began to displace Bordeaux in the minds of many top collectors as the most elite, coveted wines in the world. The Bordelais did not exactly help themselves during this period, but that is a subject for a separate article.

Younger readers may find it hard to believe, but up until the 2000s, the model for quality and for what fine wines should be like centered almost exclusively on Bordeaux. That was the ideal for excellence. Whether in the United States, Italy and other regions, even Burgundy, much of wine production was focused on making dark, deep wines like Bordeaux. The combination of what many observers viewed as aggressive release pricing, a shift in focus to Burgundy among collectors, the naturally higher volumes in Bordeaux and a broadening as to the attributes that make wines desirable go a long way towards explaining why prices for many 2005s have been flat for a number of years. Looking back with today’s perspective, however, many 2005s offer an appealing combination of quality, drinkability and price.

Two thousand five was a warm, dry year with quite a bit less rain than historical averages, but no real shock events to speak of. The heat was nothing like the blistering conditions of 2003. Perhaps most importantly, weather was stable during the final and most critical phase of ripening and into harvest. Moderate heat and cool nights gave winemakers the luxury of being able to pick at their leisure. I won’t go into a blow-by-blow recounting of the year’s weather here. Readers will find all of that information, and more, in Steve Tanzer’s superb article The Annual Red Bordeaux Report originally published in the International Wine Cellar in May 2006.

In tasting, the 2005s are rich, potent wines, with levels of textural intensity that were uncommon fifteen years ago. The 2005s have a lot of fruit, but quite a bit of tannin as well. Many wines are in the 14% alcohol range, which was highly unusual at the time, especially on the Right Bank, where the 2005s often climbed above 14%. In the Médoc a number of wines have historically high percentages of Cabernet Sauvignon, foreshadowing an approach that has become the norm, but that was less common back then. Lafite-Rothschild and Léoville Las Cases come to mind. Over on the Right Bank, 2005s tend to show the dense, heavily extracted style that reached its zenith of popularity in the 2000s, more so on the Right Bank than on the Left Bank.

On that subject, let me take a minute to explain the way I approach large retrospective tastings like this one. It is very easy to be critical. It’s much harder to actually do something in life. In my view, it is dangerous to evaluate the wines of a prior era with a present-day perspective. Hindsight is 20/20, as they say. If today’s vintages are exciting, if quality is higher than ever, much of that has to do with the trial and error of previous generations. So, my goal is not to be critical of choices that were made fifteen years ago, but merely to understand them and how they influence what is in the glass. Back to the wines…

“Our 2005s approach 14% in alcohol,” Philippe Bascaules, Managing Director at Château Margaux told me as we tasted via Zoom, sadly the norm these days. “It was the first year I had seen dehydration on the vine. At the time we were afraid to make wines with that much natural richness. Today, it has become the new normal, especially over the last five years,” he added with a bit of irony. 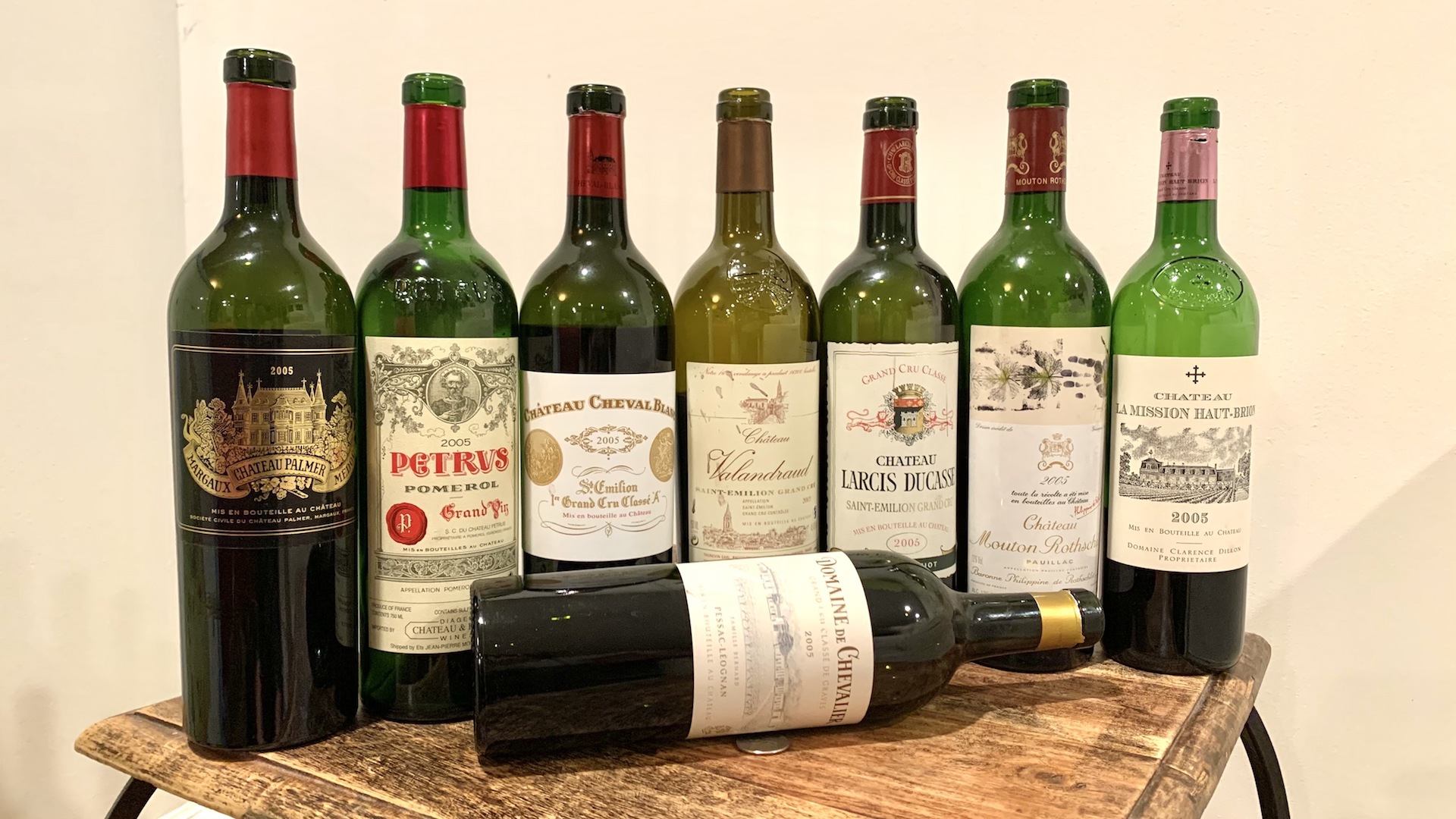 There are plenty of highlights in 2005, on both the Left and Right Banks.

Naturally it is tempting to compare the 2005s to the vintages that followed it and to the more current releases that are in the market. How do the 2005s stack up? Well, there’s a lot to talk about. To be sure, the best 2005s are epic. That’s pretty clear. But once you move on from those wines, quality becomes much less consistent. Perhaps that is a reflection of the inherent potential of sites. In my view, although the 2005s are rich wines, they are more classic and less pushed in style than both the 2009s and 2010s, years that represent the peak of a search for richness, extraction and volume.

Many things have changed since 2005. Vineyard practices have evolved dramatically as various interpretations of sustainable farming have increasingly been adopted throughout Bordeaux. The idea of what constitutes “full ripeness,” always an elusive concept, has shifted towards picking earlier and a desire to capture more freshness and energy in the wines. Gentler winemaking has replaced the heavier extractions of the 2000s. Numerous wineries have new cellars with smaller tanks that allow for greater precision in terms of picking micro-lots rather than being forced to bring in large amounts of fruit to fill big vats, as was the case virtually everywhere until fairly recently. Last, but certainly not least, climate change has had a profound influence on viticulture and winemaking. Leaving aside shock events like the frosts of 2021 or 2017, growing seasons are generally more benign than in the past. The number of good to great vintages within single decades is far higher now than it has ever been.

Critics are often accused of score inflation, sometimes rightly so. But the reality is that there is no comparison between the quality of the 2005s and more recent vintages of a similar overall level, meaning from 2015 to the present. Today’s wines are just consistently better across the range. That does not change the fact that the finest 2005s are phenomenal, absolutely thrilling wines. The best terroirs are the best terroirs, after all. But it is the wines in the middle and lower tiers that show the greatest improvement.

I rarely discuss or push the number of reviews in our articles because that creates the potential for the mistaken perception that volume equals quality. We would never (positively) judge a restaurant based on the number of covers it does on a Saturday night or a fine wine based on its elevated production. That same standard should apply to high quality wine criticism as well. But I couldn’t help noticing something about what Bordeaux articles were like when the 2005s were released. If I look at the number of 2005s reviewed from bottle at the Wine Advocate (343) and the International Wine Cellar (180), which became part of Vinous in 2014, they pale in comparison next to 800-1000 wines that Neal Martin and I regularly review from bottle today. What is driving the difference? To be sure, there has been an increase in second and even third wines. I imagine, though, that wines from less famous appellations account for most of the difference between what critics taste today and what was common 15 years ago. Were those wines good, but critics simply weren't tasting them, or have they become notable only recently? I honestly don’t know the answer.

I tasted the wines in this article between the end of 2020 and the first few months of 2021. Almost all the wines were sourced directly from the châteaux, although some bottles came from friends’ cellars and my own personal collection. One of the big advantages of tasting from home during a pandemic (maybe the only advantage) is having the opportunity to follow wines over hours and sometimes days. That is exactly what I did. I also tasted many 2005s, especially most of the reference points, from more than one bottle. There are a few wines I missed, mostly for logistical reasons. I will endeavor to add them to this article as soon as time permits.

In closing, I would like to thank two of my closest friends (you know who you are) for opening so many bottles for me so I could taste, re-taste and taste again.