Is Brunello di Montalcino a wine with the potential of living 100 years in a perfect cellar? Well, it is according to generations of the Biondi-Santi family.

A testament to this claim can be witnessed through cherished Riserva bottlings that surface once in a blue moon from within the Tenuta Greppo cellars to show their worth. Unfortunately, what has been proven over the course of many decades is that the overwhelming majority of Brunello does not possess the ability to make the 100-year mark, nor would today’s producers necessarily wish to make their wines in a style that could age for this long. In fact, if anything, the last three decades have been spent trying to understand how the region can make wines that will be enjoyable within a few years of release, as well as maturing positively in collectors’ cellars. This brings us to the twenty-year mark of the 2001 vintage of Brunello di Montalcino, a year that was rated four out of five stars by the Consorzio at the time; yet it remains highly regarded as one of the best vintages of its decade by both collectors and producers.

So why twenty years? Why not ten or thirty? Because, in my opinion, it is the twenty-year mark that proves the potential of a Brunello vintage. At ten years, a classically structured vintage is still in its adolescent stages (think 2010). At thirty years, only the best wines will still be drinking well (think 1990). However, at twenty years, you can assess from a broad range of producers if the vintage is ready to drink now, drink soon, or continue to stash away in your cellar.

Another important factor to add into the equation for 2001 is that the vintage marked a pivotal time in the history of Montalcino, when there was a push toward a darker and more accessible style of Brunello. Many producers were using French oak barriques and talking about “special clones'' that would add deeper and richer hues to their wines. Remember that this was prior to the infamous Brunello-gate scandal, where vintages were held back by authorities, and producers were investigated with the suspicion that they were adulterating their Brunello (a wine that should always be 100% Sangiovese by law) with international varieties, or juice that was brought in from the warmer regions of Italy to pump up ripeness levels and appeal to the wine lovers. But it was also during this period that a number of producers in Montalcino began to conceptualize the vineyard practices and winemaking that are common practice today. 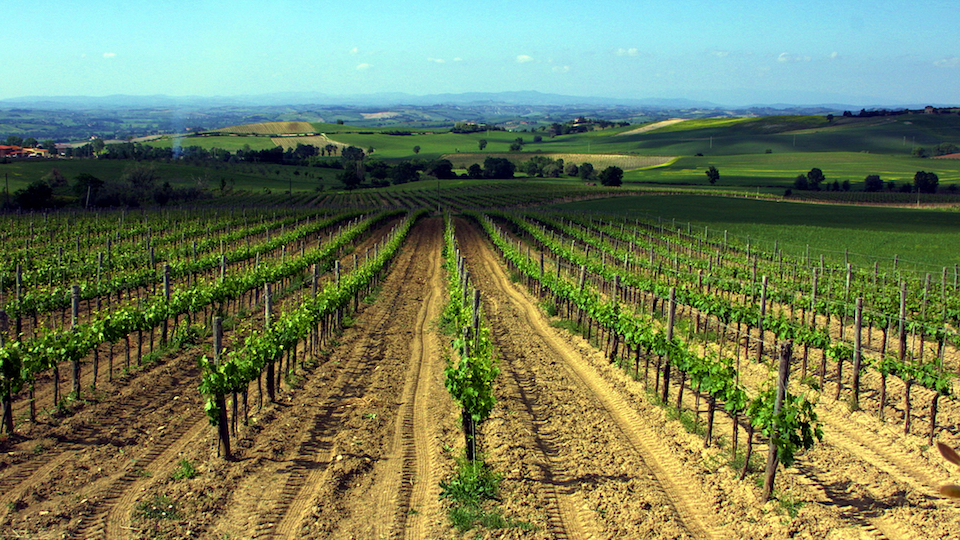 The Casaccia Vineyard of Canalicchio di Sopra in 2001.

When working to collect samples to add to this tasting, some producers didn’t even want to be included, while others opened their responses with a comment I became very familiar with, “Please keep in mind that 2001 was a very different time…” For this reason I began to approach most winemakers with the question: “What has changed since 2001 in your winery and around Montalcino?” Some replied with short answers, while others wrote pages. Their responses became the most insightful part of my tastings, I included this information in the notes and producer commentaries. I also realized how many producers didn’t have any of their 2001s left in their cellars, or not enough to be willing to part with their remaining bottles. This added another factor to the tastings, as I reached out to retailers, private collectors and dug into my own cellar to taste as broadly as possible. Being able to sample bottles from around the world provided insights into how well they held up, not just for bottles coming safely from a winery’s cellar but also in the world’s market. Provenance is paramount. These details were added whenever possible.

Let’s keep in mind that the world’s view on Montalcino and what makes a Brunello great has changed just as much as the styles and focuses of the winemakers. Today, the word “traditional” is tossed around as often as the term “terroir”, even as the idea of what and what is not “traditional” in Montalcino is actually unclear. You’d be surprised by how many of the producers you think of as traditional are using tonneaux or some small amount of barrique (often neutral, 2nd, 3rd or 4th pass), but not large casks of either French or Slavonian oak. On the flipside, you’d also be surprised by how many of today's bigger, richer and darker wines are really the result of vineyard practices and location more than winemaking. For me, what truly matters is that the producer is focused mainly on communicating varietal purity.

Another big change over the last twenty years is the respect that consumers now have for the wineries that remained true to their roots, even during the “dark times” of Montalcino; another term that producers have used in reference to the late nineties and into the early two-thousands. Looking back at the who’s who of Montalcino during 2001, there was nowhere near the widespread respect that we now see for the likes of Le Chiuse, Baricci, Pertimali, Canalicchio di Sopra, Padelletti and Il Marroneto, to name just a few. It’s also interesting to note the location of these producers; the northern hill of Montalcino, which was not as much in vogue twenty years ago as it is today. This location enjoys cooler temperatures and a much longer growing season coupled with soils rich in marls and limestone, a good recipe to create fresher yet longer-lived wines—and it shows in the 2001s.

That’s not to say that the warmer south didn’t fare well at estates located in lower elevations with alluvial soils rich in clay. Many of these wines, which likely showed much more fruit in their youth, are still fresh and vibrant today. Some were aided by (not hurt by) the era's trendy use of barrique - something that some people regard as a scar on the face of Brunello; yet in this case, it turned out some truly beautiful, age-worthy expressions. And on the topic of wood, there is the Riserva category, which I've gained a newfound respect for since starting this retrospective. As of the 2001 vintage, a Riserva, by law, was required to spend no less than three years maturing in wood prior to bottling (this is no longer the case), and in nearly every occasion during my tastings, the wines benefited from it. 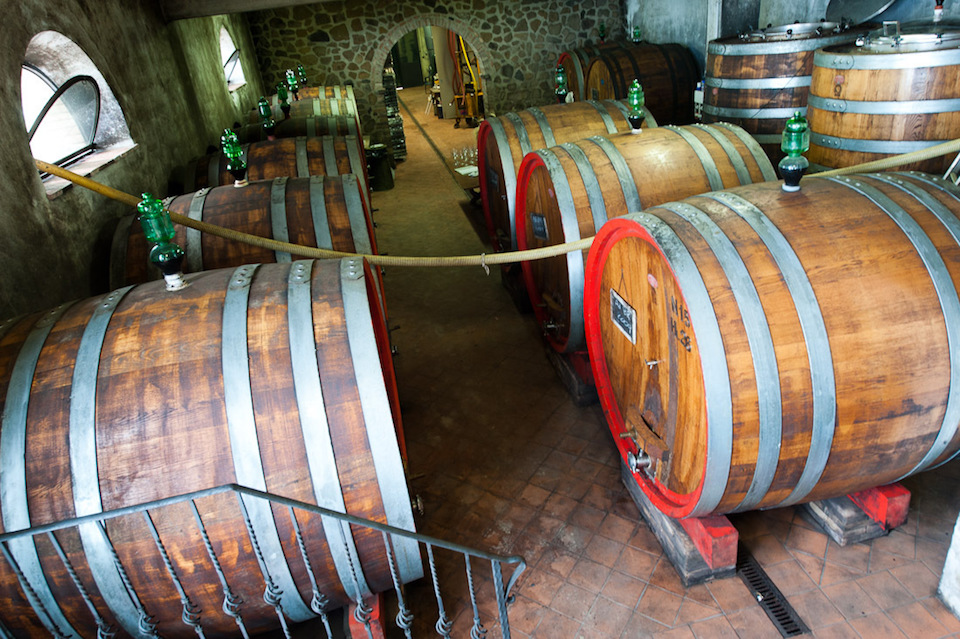 A Holistic View on the 2001 Vintage

Adding to the list of things that have changed in Montalcino since 2001, we must talk about the current understanding that this region cannot be lumped together under one generalized description of a single vintage. Going back to reports written about the 2001s, such as from our very own Antonio Galloni, critics at the time were already talking about this; but from the average collector’s perspective, there was not a clear understanding. For me, as a consumer back then who tasted broadly before buying, one generalization that I can make is how difficult it was to read many of these wines upon release, with tannic structures holding their fruit in reserve and drying out the palate with each passing sip. Many of my personal buying decisions depended on the experience and insights of critics to help understand what these wines might one day mature into. Fortunately, I bought deeply on those recommendations.

The 2001 vintage started out rainy through the winter and into the spring, which was ultimately very helpful to build up water reserves for the warmer summer months. In April, the region experienced a drastic drop in temperatures. One winemaker even described this to me as a “return to winter.” While producers in the south fared well through this time, the higher elevations and the north of Montalcino were faced with a frost which drastically reduced yields; some wineries reported as much as a 50% loss. Overall, this dip in temperatures also slowed down vegetative growth, helping to extend the season. While the summer was considered warm at the time, it was cooler than average by today’s standards, and it also benefited from well-timed rains and favorable temperature swings between day and night. In general, harvest was late; yet from producer reports, it was actually a very wide harvest window that lasted from the first week of September through the last week of October, depending on the location and the health of the fruit following the challenging frost and temperature swings of the season. In the end, we often hear that vines impart character through overcoming challenges, and that might be said of 2001. It’s a structured year, which possesses a cool vintage feel, with depths derived either through natural selection, a long growing season where all of the chips fell into place, or a combination of the two. 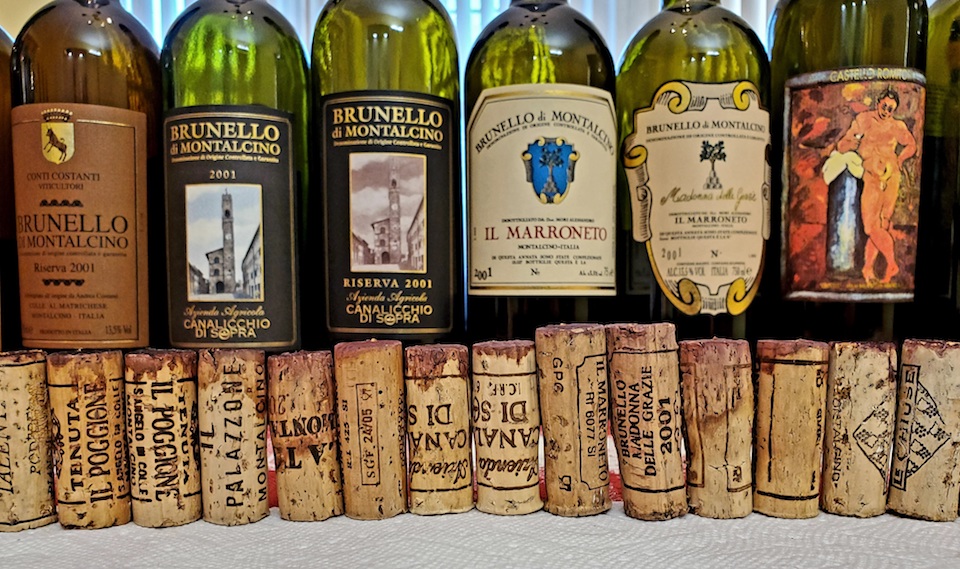 An impressive lineup of corks of twenty-year old wines.

So Where Does That Leave Us?

Most of the 2001s I tasted are showing beautifully. The majority of them have peaked or are just a few years past their prime, yet they are still an absolutely glorious expression of Sangiovese from Montalcino. Having said that, in nearly all of these cases, there is no rush to drink them immediately, but I also wouldn’t hold them for another decade. There are certainly a few that would warrant some more time in the cellar, but this is the exception, not the rule. In general, the cool and classic 2001s come across as perfectly resolved, balanced and just beginning to show tertiary notes of earth and minerals. Most wines benefit from an hour open in bottle, yet I wouldn’t recommend decanting. What will greet you in the glass is a multi-dimensional bouquet, floral and layered, with rich, ripe berries and spices, followed by silky textures and sweet fruit, uninterrupted by tannin and energized by residual acids.

Lastly, I want to take a moment to thank the retailers that kept their eyes and ears open for me to acquire wines, and the friends and collectors who pulled bottles from their cellars to taste. As for the tastings themselves, all bottles were tasted after having been rested for no less than two weeks after arriving. Where I was able to taste from more than one bottle or source, I did so to assure consistency. The majority of these wines were tasted in New York City between December 2020 and February 2021.