Gems From The Cellar at Montevertine

Montevertine is one of the most privileged spots for wine anywhere in the world. If I had to choose only one Sangiovese to cellar, it might very well be Montevertine's Le Pergole Torte. The wines from Montevertine, a small hillside property just outside Radda, in the heart of Chianti Classico, have demonstrated an uncanny ability to age beautifully for decades, acquiring incredible finesse in bottle. This cool, high altitude site encourages slow ripening and yields Sangioveses endowed with remarkable grace. Although most of the attention centers around the flagship Pergole Torte, I also adore the Montevertine bottling. Given the exceptional track record the Manetti family has built over the last few decades, it is hardly surprising some of their lesser known wines age just as well. 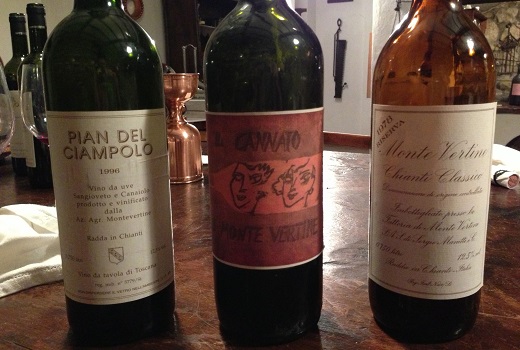 Montevertine’s 1996 Pian del Ciampolo is frankly a revelation. At seventeen years of age, it is in great shape, which in and of itself is a remarkable achievement for an entry-level wine. The enticing Pinot-inflected bouquet laced with crushed flowers, earthiness and sweet dried cherries is utterly captivating. Although a little less interesting on the palate, the 1996  is beautifully balanced and flat-out delicious. What an eye-opening bottle.

I will not be surprised if few readers have ever heard of Il Cannaio di Montevertine, a wine the estate made for Giorgio Pinchiorri and his famous restaurant in Florence beginning in the early 1980s. The 1986, a Sangiovese/Canaiolo blend from a single parcel on the property, is simply stunning. This is classic Montevertine. Deep, rich, yet miraculously weightless, the 1986 is firing on all cylinders. I doubt I will ever taste it again, but it seems pretty safe to say the 1986 will dazzle those lucky enough to find it for another 15-20 years. Wow.

Readers will recall Montevertine’s founder Sergio Manetti caused quite a stir when he left the Chianti Classico Consorzio in the early 1980s, so it is quite ironic that this tasting end with a Chianti Classico, in this case the 1978 Riserva. Another wine still in great shape, the 1978 is more about structure than fruit at this stage. It remains marvelously intact but is also at a plateau of maturity. According to Sergio Manetti’s son, Martino, who makes the wines today, his father never added white grapes to his Chianti Classico. It didn’t seem to matter then, and producers eventually figured it out, which is why it doesn’t matter today...