While it is common to refer to Trentino and Alto Adige as one region, Trentino and Alto Adige, are in fact, quite different from historical, geographic, and social perspectives. The simplest way to differentiate between Trentino and Alto Adige is that the former is Italian-speaking and the latter (also known as Südtirol) is mostly German-speaking, as it was annexed by Italy after World War I. But the differences in terms of grape varieties and wines are just as big. Ampelographically, Trentino’s most typical native white grape is Nosiola, while its emblematic red varieties are Marzemino, grown along the banks of the Adige River (and which, unless the grapes are air-dried, gives a light to medium-bodied, fresh wine) and Teroldego (a much bigger red), grown especially on the Rotaliana plain in the Valle dell'Adige to the north of Trento. None of these three grapes are typical of nor grown much (if at all) in Alto Adige. Last but not least, Trentino has become one of Italy’s two most important sources of high-quality sparkling wines made by secondary fermentation in the bottle in the manner of Champagne (the other being Lombardy’s Franciacorta, of course). Trentodoc is the name used to designate these well-known sparkling wines. 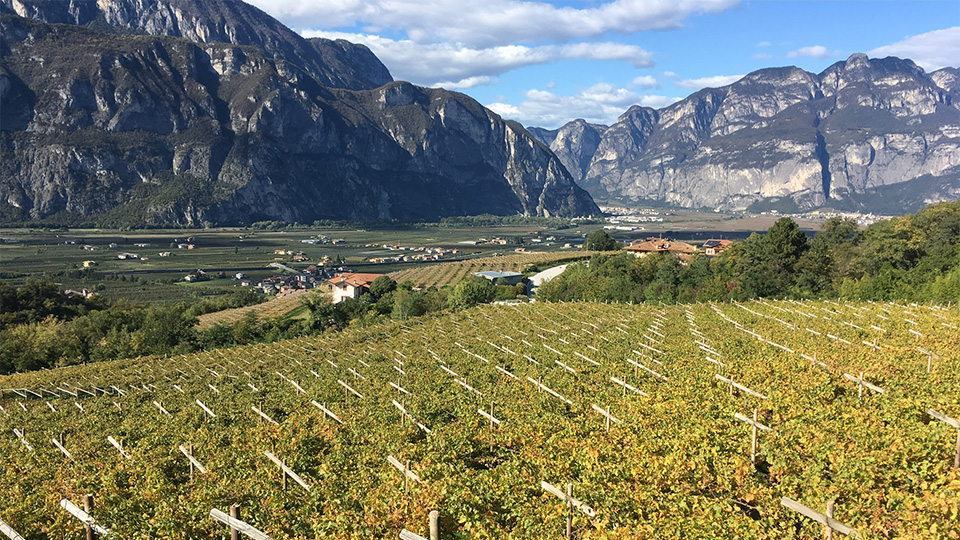 A beautiful and typical panorama of vines in Trentino

In Trentino, almost all wines are named after the grapes from which they are produced. This is why the majority of Trentino DOC wines are labeled with the grape variety name and the word “Trentino.” An exception to this is what is undoubtedly the region’s best wine by far, though produced in ridiculously small volumes: the very sweet and viscous Trentino Vino Santo, made by air-drying the local native white Nosiola grape. However difficult it may be to find a bottle, my advice is to do whatever you can to acquire one, for the better examples are unquestionably among Italy’s finest, if least-known, sweet wines. Unfortunately, it is not just the sweet Nosiola Vino Santo wines that are rare; the dry wines made with Nosiola are similarly scarce. The Nosiola grape is characterized by thin skins that command a great deal of work in the vineyard, and is fast losing favor with growers everywhere in the region. For example, in 2017, production in Trentino of Nosiola grapes was just slightly more than 4,000 quintals (a quintal is equivalent to 100 kilograms), which translates to less than 0.5% of Trentino grape production. 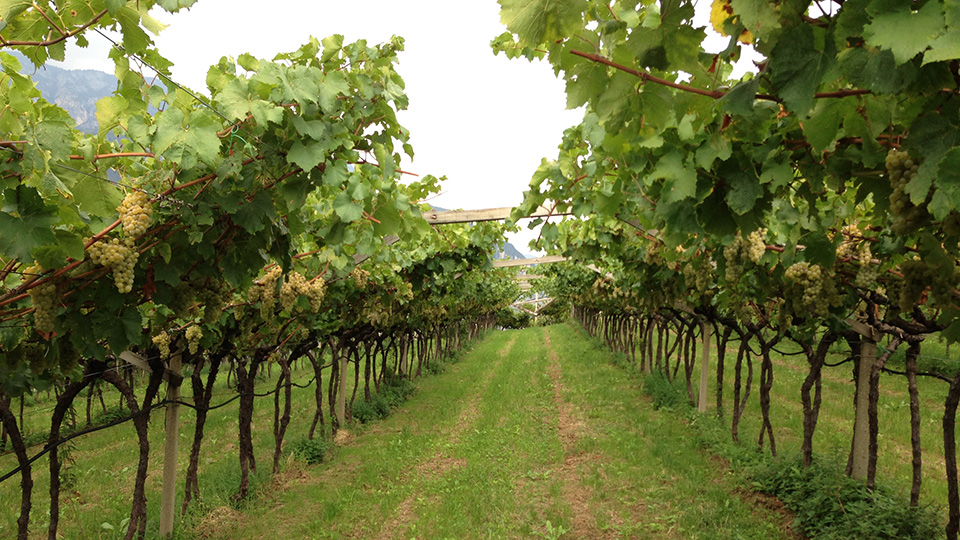 A well kept vineyard at a mountain top maso in Trentino

But for all the talk about native grapes, currently more than 50% of white grapes grown in Trentino are Chardonnay. This is because Chardonnay is used to make both dry still wines (which are, frankly speaking, of practically no interest by global standards) and the aforementioned sparkling wines (Spumante Trento Metodo Classico or Trentodoc). Other white grapes commonly grown in Trentino include Pinot Grigio (Pinot Bianco is much rarer and more typical of Alto Adige), Müller-Thurgau (of especially high quality when grown in the Val di Cembra), Sauvignon Blanc, Gewürztraminer (often referred to as Traminer Aromatico) and Manzoni Bianco (believed to be a Riesling/Pinot Bianco cross, although recent data suggests it might actually be a Riesling/Chardonnay cross). 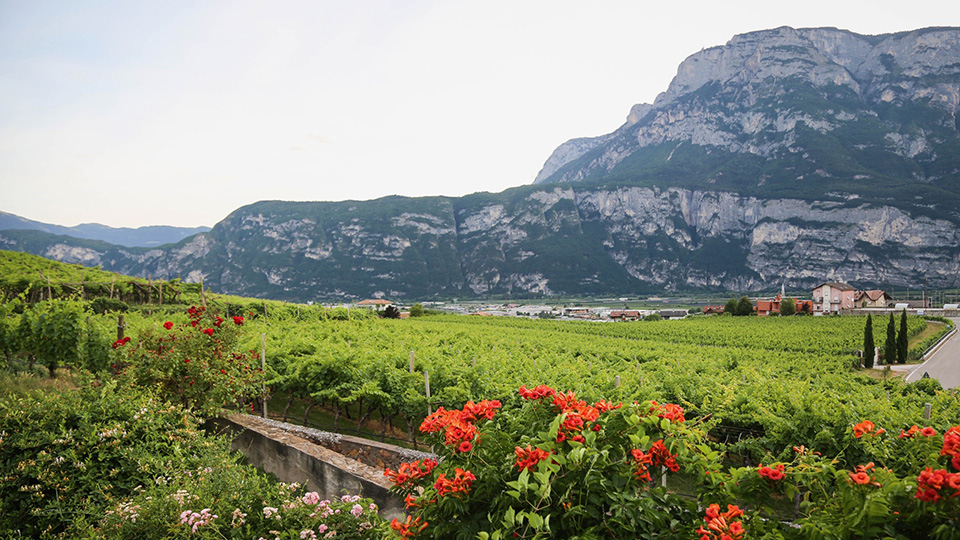 The most commonly grown red grapes in Trentino are the members of the Schiava family (Schiava Piccola, Schiava Grossa and Schiava Grigia), which yields delightful, easygoing red wines brimming with early appeal and that are just as delicious when served slightly chilled. The most highly-regarded denomination where Schiavas are heavily featured is Caldaro, which is sometimes referred to as Lago di Caldaro. Teroldego (“Teroldego Rotaliano” is perhaps Trentino’s best-known wine denomination), and Marzemino are the region’s most important red grapes. Trentino is, along with Alto Adige, the Italian home of Moscato Rosa, which gives some of the country’s most delicious sweet aromatic red wines. Native varieties  such as Casetta and Groppello di Revò make interesting reds that are worth seeking out when you visit the area, as production volumes of each are too small for the wines to be easily found outside of Italy (although exceptions always exist, of course). International red varieties including Pinot Nero, Merlot and Cabernet Sauvignon are also commonly grown in Trentino, while Cabernet Franc is much rarer. 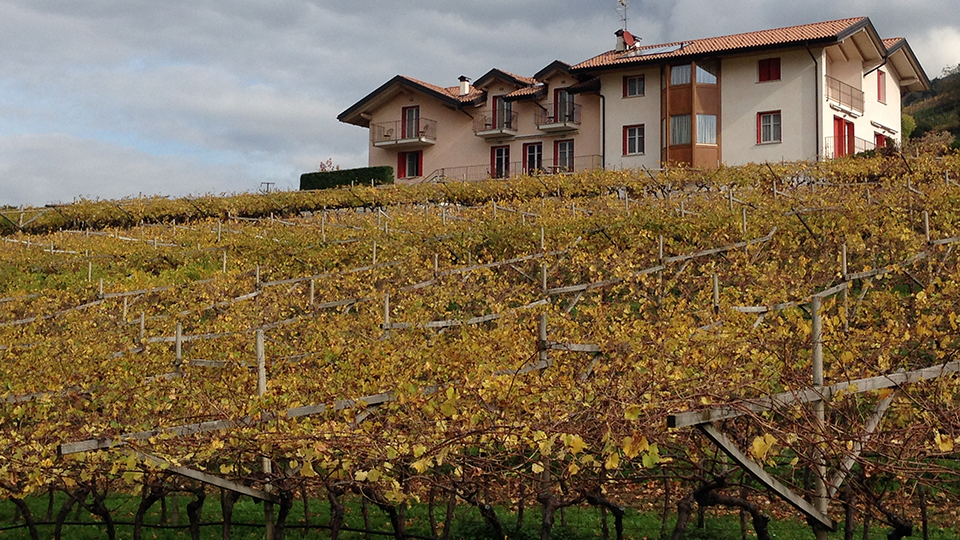 Beautiful Maso Grener and its forests of vines

Trentino is blessed with a wealth of viticultural terroirs, ranging from flatlands to alpine slopes, and a plethora of mesoclimates, varying from sub-Mediterranean (in the Valle del Sarca and the Valle dei Laghi) to continental (in the Piana Rotaliana, the Vallagarina, and the Val d’Adige) to downright alpine (in the Val di Cembra). Trentino also boasts Italy’s highest percentage of land producing DOC wines (roughly 80%), as well as several extremely prestigious family-owned wineries: names include Lunelli (the famous owners of the Ferrari sparkling wine estate), Elisabetta Foradori, Guerrieri Gonzaga (producer of the famous San Leonardo red wine), and Pojer e Sandri. All of that should mean a high output of world-class wines, but unfortunately it is not so. By far the largest share of Trentino's wines are produced in cooperatives, each with hundreds if not thousands of associated grape growers. In theory, cooperatives allow small grape growers who cannot make wine in economically sustainable volumes to benefit from technical guidance, state-of-the-art facilities and distribution networks they would not have access to on their own. Unfortunately, the production of many of the region’s co-ops reflects a mostly industrial viticulture and enology, translating to high-volume, low-quality wines that end up being mostly supermarket fodder of little note. By contrast, the finest Trentodoc sparkling wines are, for the most part, absolutely world-class wines. 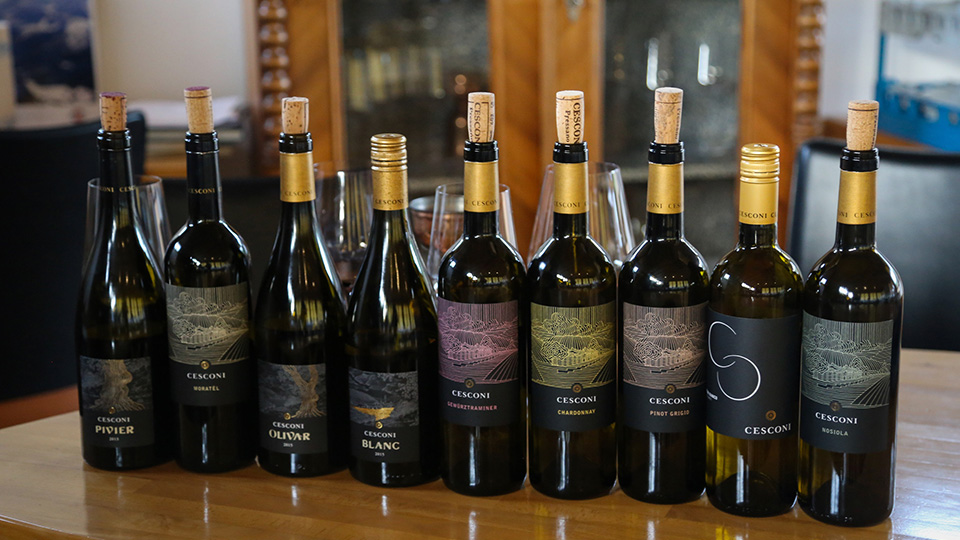 A lineup of wines tried at Cesconi

Broadly speaking, the 2017 vintage will be remembered for an early spring (with late-season frost episodes on April 21 and 22), a first part of summer that was cooler and rainier than usual, and then a succession of extremely hot days in the middle of summer (punctuated by a few episodes of hail). September helped greatly, bringing many sunny, warm days characterized by good diurnal temperature variations. Common traits of the 2017 wines are a certain spiciness and early appeal. The 2016 vintage was a year characterized by large grape bunches and good production volumes; much like in Alto Adige, it was an especially good vintage for white wines, while the lack of August sunlight and heat penalized the red wines. Overall, the wines have lithe, sleek frames and will not go down in memory as the region’s most concentrated or complex. The overrated 2015 vintage (as is universally almost always the case when a vintage is characterized by hot, sunny weather) was initially believed to be outstanding for both whites and reds. In fact, while many white wines lack acidity, the reds are extremely successful, especially those made with Teroldego and Marzemino (two grape varieties that often have trouble reaching optimal physiologic ripeness). Like most everywhere else in Italy, the 2014 vintage was difficult and plagued by rain, with red grape varieties often rotting on the vine before they could fully ripen. The better estates took losses of as much as 40%, and many didn’t produce their top bottlings. By contrast, the white wines, though blessed with neither staying power nor mind-boggling complexity, are especially perfumed and have, for the most part, turned out slightly better than expected.

I tasted the wines in this report either directly at wineries or in my office in Rome in June, July and September 2018.