Imagine watching a wine region grow and evolve over the course of forty years as a forward-thinking and open-minded winemaker, ingrained in the study of terroir, clones and experimental cellar practices. Think of watching the powerful and highly-oxidized farmhouse-styled wines of the region transform into surgically clean and tension-filled whites, to then morph to become big, rich and internationally-styled expressions, and finally to develop into being transparent to terroir, yet powerful and poised examples of purity. All the while, preferred clones are changing, as is the climate, and with that farming practices and the tastes of the end consumer. Now imagine that, through it all, you have established yourself, proven your prowess and the prestige of your vineyards, and you continue to produce one of the top portfolios in your region. Gianfranco Gallo of Vie di Romans can attest to all of these things and more.

Gallo’s belief, which developed quite early in life, in the white wines of the southeastern plains of Isonzo in Friuli-Venezia Giulia places him into the category of a visionary. Climatic conditions here find a balance between Continental and Mediterranean, producing wines that are able to mature positively over the course of decades. Today, we examine this vision through a vertical of Sauvignon Blanc Vieris. 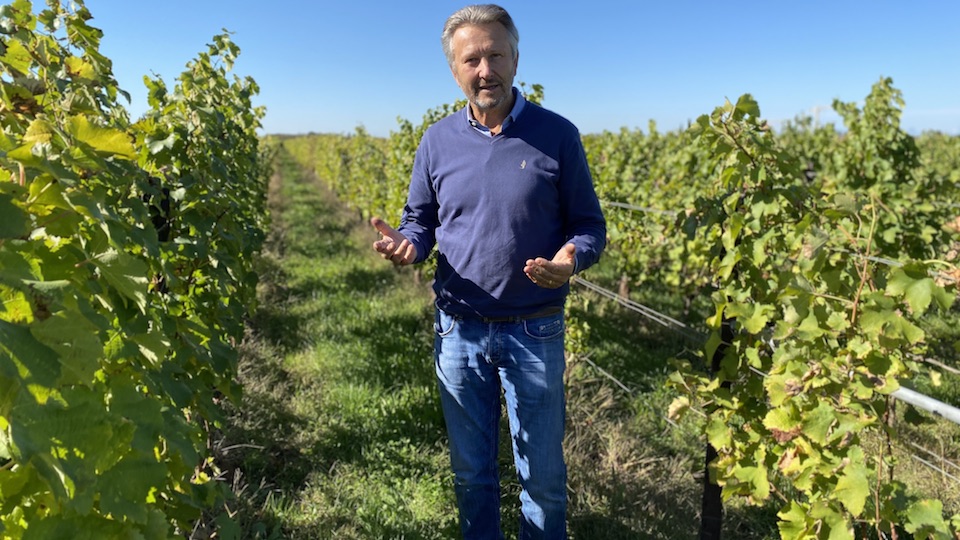 Gianfranco Gallo has been the driving force behind Vie di Romans since 1978. Here he is standing in the Vieris vineyard.

A tasting of this sort isn’t something that the average winery or producer of white varieties would be easily willing to do. It’s one thing to submit thirty years’ worth of Barolo, Brunello or Bordeaux - but a single-vineyard Sauvignon Blanc from Isonzo? In the case of Gianfranco Gallo, he had no worries. After years of working with the numerous white varieties of the region, it was the potential of Sauvignon Blanc that captivated his imagination, or more its phenotypic qualities, meaning how it responds so differently from place to place and vintage to vintage. What’s more, here in Isonzo, he could push Sauvignon Blanc to full phenolic ripeness while maintaining typicity. To prove his point, not only were some of the best vintages submitted for review, but also some of the most difficult because this is about better understanding an often confused region, the variety, and how it can excel on the alluvial plains and within the uniquely contrasting climate of Isonzo.

Friuli-Venezia Giulia doesn’t fit into the typical perception of quality that consumers have about Italian regions. The wines here are often very different from even the bordering areas. These vineyards are located as close as twelve to thirteen miles from the Adriatic coast, but their climate is better compared to their northern neighbor, Austria, than to the rest of Italy.

The plains of Isonzo were created through a series of glacial movements that took place over a million years. With each glacier that passed through the region, a warming period released its waters and carried sediment down from the Alps, filling the Isonzo river valley with a series of alluvial benches that have weathered and worn over time. In the case of the vineyard that creates the Sauvignon Blanc Vieris, the soils are calcareous, shallow and well-draining with a gravel-pebbly texture mixed with sand and silt of a reddish hue, the result of iron and aluminum oxides. The vineyard is relatively flat, consisting of nearly nine and a half hectares of vines, and sits at just thirty-one meters above sea level. The climate is often described as “Maritime.” However, there is a strong push and pull from the Alps to the north and the sea to the south. It is also strongly influenced by two contrasting winds that alternate throughout the season: the warm and humid Scirocco winds that blow up from the Mediterranean, and the Bora winds that arrive from the north-east from the mountains of Slovenia, bringing cooling ventilation and drastic day-to-night temperature variations to the Isonzo plains. While the region is typically rainy in the spring and fall, the climate coupled with the well-draining alluvial soils create an ideal location for viticulture, as well as providing an extended growing season. 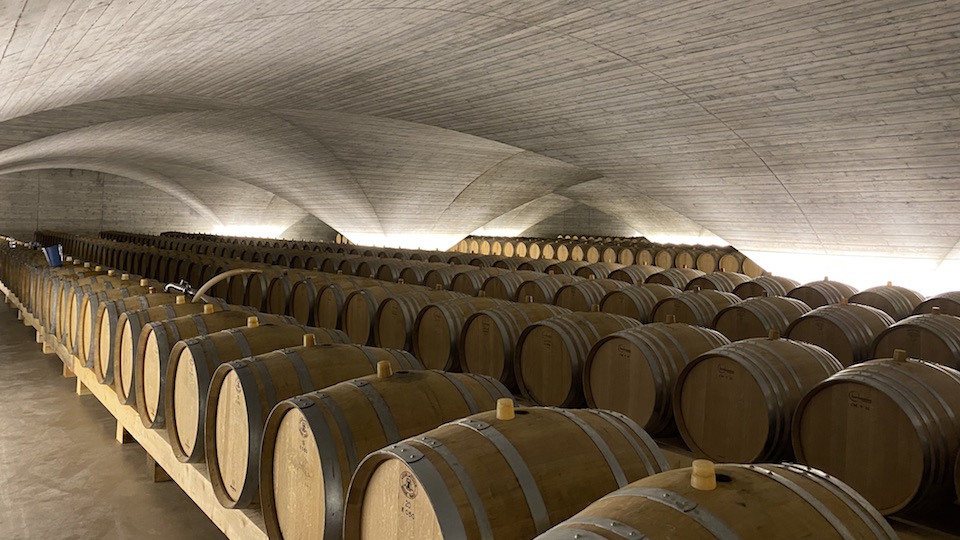 Gianfranco Gallo first took the reins of his family's cellar and vineyards in 1978. The Gallo family had been vine growers and winemakers for hundreds of years with the holdings in Friuli going back to 1820. During our tasting, Gallo explained how watching his grandfather working in the vineyards and cellars was an inspiration. After completing studies in agriculture, Gallo’s focus was set on taking the family business from selling in bulk to bottling their own wines. Gianfranco Gallo saw the potential of the soils and began reorganizing and replanting his vineyards in 1980. He wanted to create cleaner wines, choosing to farm through organic processes from the beginning and focusing more on quality than quantity. He also had a desire to highlight the individual terroirs of each of his parcels. It was because of this that the Sauvignon Blanc Vieris was created separate from the Sauvignon Blanc Piere, which hails from deeper, clay-based soils in a cooler location. As of 1990, the first vintage of this vertical, the labels at Vie di Romans displayed both the grape variety and the cru from which they were sourced. That same year, Gallo began releasing the wines a full year later than had been previously done, a practice that was not common in the region at the time. Gianfranco Gallo not only believed that his production could stand the test of time, but also that the wines needed to rest longer in bottle before being presented to consumers.

Through the years, the vineyard management and winemaking at Vie di Romans evolved, along with the region and trends, but always with an eye on the future. Since the start, Gallo has always been inspired by the white wines of California, which is unusual for a Friulian producer. The wines of the nineties were made through a more oxidative style, while the early 2000s went into full reverse, using carbon dioxide to protect the musts from oxygen. Gallo also began pushing the vines to peak physiological ripeness to extend the growing season which went against the previously held belief in the region that Sauvignon Blanc should be picked early. From 2004 through 2006 came the trends to make bigger, rounder wines, and so, malolactic fermentation was introduced, as well as frequent batonnage. However, Gallo quickly realized that this approach was hindering the wine's transparency of fruit and ability to mature evenly, so he stopped. Over time, there was a constant reduction in the use of new oak until 2015, when Gallo decided to mature the Sauvignon Blanc Vieris only in two-to-eight-year-old used barriques. Also, as of 2015, all handling of the musts and juice within the winery is devoid of oxygen from start to finish. In 2007 Gallo began a library program which resulted in the ten-year release of the Collezione Millesimi (the Vintage-dated Collection) in 2017. More recently, Gallo has just finished the construction of a new aging cellar with a hospitality facility on top. The new space allows him to house all current and library vintages produced at Vie di Romans in the old buildings. 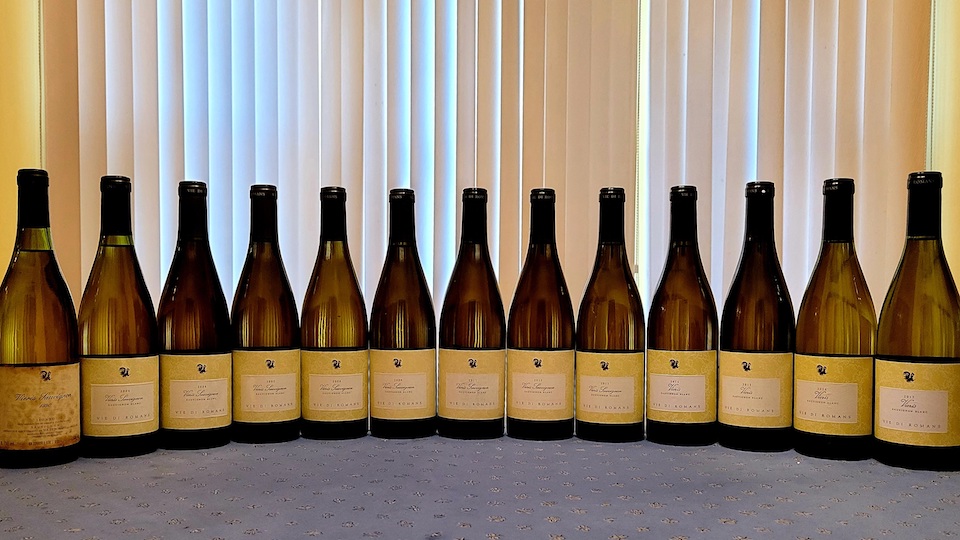 Frankly, it was both riveting and eye-opening to taste through this fourteen-vintage vertical, encompassing almost thirty years of evolution at Vie di Romans. I worked backward by vintage through the first pass, and was then joined by Gianfranco Gallo over Zoom to go through it again, from oldest to youngest, and discuss the vintages and changes that had been made over time. I listened to him speak in detail about how exciting 1990 was, and how the vintage changed everything for him. This was the year that allowed his Sauvignon Blanc to achieve perfect physiological ripeness, where the wine seemed to make itself in the winery. It was also the year he married his wife, Franca. He then talked about how dissatisfied he was with the changes that were made while producing the bigger and richer 2004s and 2006s. Gallo described 2014 as “the coldest and rainiest year we ever had”, where their team worked tirelessly to save what little fruit they could from an onset of botrytis. The most recent vintages proved that through open-mindedness and experimentation, what started as a mere 7,200 bottle production of a fateful vintage, has now reached 36,000 bottles per year without compromising quality. I revisited the wines a full forty-eight hours later, to the remarkable realization that the 2008, 2011, 2013, 2016, 2017 and 2019 were just as lively and fresh as the day they were first opened.

To fully experience the Sauvignon Blanc Vieris readers should taste a mature bottle. I thought of this while contemplating the 2019 with all of its unbridled intensity and concentration, but also a structure and acid core that kept the expression fun in its youthful state. This wine is the result of a turbulent year of ups and downs, an extended growing season, and a smaller-than-average crop. The 2019 suggests the citrus intensity, sapidity and concentration of great vintage expressions like 2008 and 2013, and it makes me want to bury this wine in the cellar. In the end, it’s a question of preference, mature or young; but no matter which you choose, the Sauvignon Blanc Vieris is one the world’s most distinctive wines, and it offers terrific value to the consumer.

All of the wines for this article were tasted multiple times over the course of three days in New York City during August of 2021.