Domaine Weinbach is arguably one of the world’s greatest wine estates. Over the years, the Faller family has produced myriad fantastic wines that are sought by wine lovers and collectors everywhere. That consistent track record has shed light on Alsace’s many delicious, age-worthy and memorable white wines. Quality is so high across the board at Weinbach that it is hard to choose a single “best” wine as the subject of a vertical tasting. 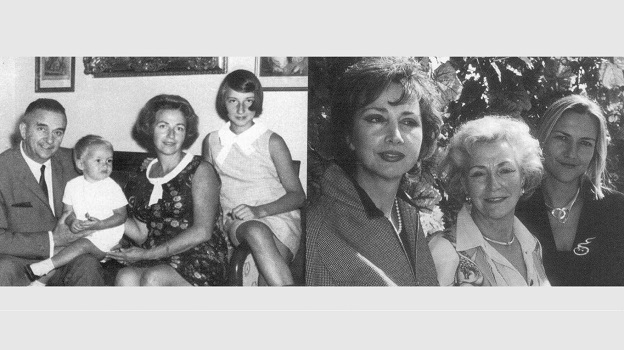 LEFT: the Faller family when Catherine (on the right) and Laurence (left) were children. RIGHT:  Catherine, Colette and Laurence

An argument could be made that one of the estate’s many incredibly delicious Sélection de Grains Nobles or a Gewürztraminer (a variety with which this estate has always had a uniquely magical touch) might have been even more apt choices for a vertical tasting than the Riesling Schlossberg Cuvée Ste. Catherine. Nevertheless, Riesling seemed the right choice, as Domaine Weinbach has the good fortune of sitting just below the majestic Schlossberg, one of the greatest and most historic vineyards in the world. 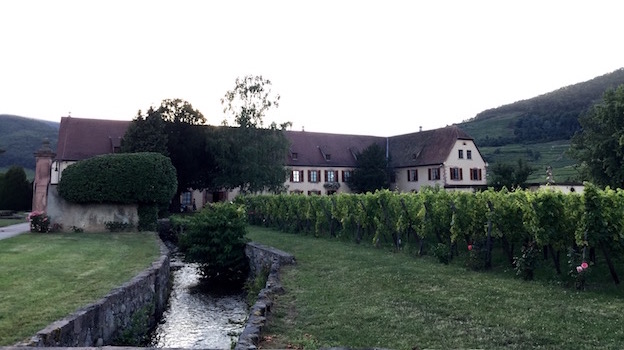 Domaine Weinbach is located in the heart of Alsace’s fairly tale-like wine country, easily one of the most beautiful places anywhere in the world. “Weinbach” is the name of a small stream that runs through the property; and believe it or not, it’s a German word that actually means “ river of wine”, only reinforcing the notion that great wine runs freely at this address. I can’t help but think there could hardly have been a better choice for that little stream’s name. The lovely country villa, built in the typical Alsatian style, doubles as both family home and winery, and was built in 1621. The building itself is known as the Clos des Capucins as it served as a Capucin monastery for centuries and is surrounded by vineyards that were tended to by monks as far back as the 9th century. With the advent of the French Revolution, the Clos des Capucins (like many other religious domaines) was deemed a property of the state and sold. The Faller brothers bought the Clos des Capucins in 1898. It has remained in the hands of the family since then.

In the years and decades that followed World War II, Théo Faller, one of the great men of Alsace wine, grew the estate’s holdings and improved the quality of the wines. Faller passed away in 1979, but his work was carried on admirably by his wife Colette, and her two daughters, Catherine (who oversees sales and marketing) and Laurence (universally regarded during her lifetime as one of the world’s very best winemakers.) Through a combination of unique talent, charm and sheer hard work, these three women turned the estate’s wines into must-haves for consumers and collectors not just in France but around the world. Always driven to push the envelope and achieve the best, Weinbach was one of the first estates in Alsace to adopt biodynamic farming practices in the late 1980s, long before they became a generalized fad or a widely accepted  As of 2005, the entire property is farmed biodynamically. Over the years, the three ladies also invested heavily in prime vineyard sites near the estate. Domaine Weinbach now owns twenty-four hectares in very high quality lieux-dits (the Altenbourg) and extremely famous grand crus such as the Schlossberg, the Markrain, the Furstentum and the Mambourg. Sadly, both Laurence and Colette Faller passed away unexpectedly in 2015. Today, Catherine Faller and her son, Théo, run the estate. 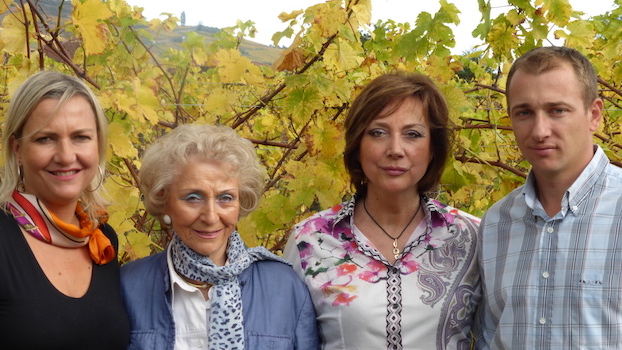 Schlossberg has been renowned for the quality of its wines since the 15th century. Not surprisingly, Schlossberg was the first Alsatian vineyard site to be recognized as a grand cru when Alsace began officially classifying vineyard sites in 1975. As far back as 1928, the inhabitants of the two towns associated with this grand cru, Kaysersberg and Kientzheim, had agreed on qualitative production guidelines that were in place long before the official grand cru designations came to be. Schlossberg’s name derives from the nearly 900 year old castle situated on the cru’s western edge (schloss means castle in German). Like all other Alsace grand crus, Schlossberg is characterized by a dominant soil type: granite, or more precisely, granite and magmatic subsoil/bedrock and sandy/decomposed granite topsoil that is shallower at the top of the hill (roughly 360 meters (1,181 feet) above sea level) and deeper towards the bottom (230 meters (755 feet) above sea level). The topsoil is rich in potassium, magnesium and phosphorus, much moreso than the majority of other Alsatian grand crus. It is this richness and diversity of these compounds that is believed to account for at least some of the specific, highly mineral characteristics of Schlossberg wines. Extremely steep and sundrenched, the Schlossberg (much like the Rangen and other renowned Alsace sites) requires terracing for pickers to be able to work the land. The vineyard encompasses southwest,due south and southeast exposures and is the westernmost section of an uninterrupted, mainly south-facing slope that runs for 4.8km (roughly 3 miles) from Kayserberg to Bennwihr and that also includes the Schlossberg, Furstentum, Mambourg and Marckrain.grand crus. 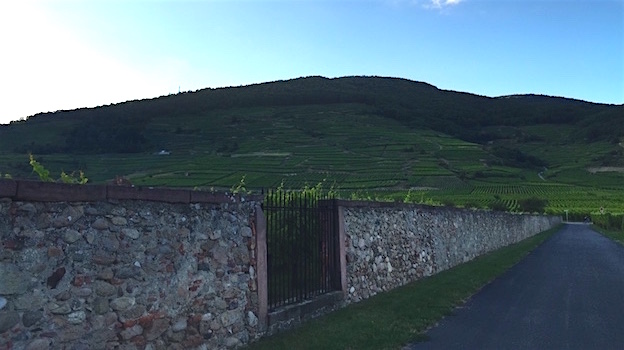 Unfortunately, Schlossberg is also a very large grand cru (in fact, at 80 hectares or 198 acres, it is Alsace’s largest) so there are substantial differences between the wines made from grapes grown within its boundaries. In fact, the Schlossberg isn’t even one site, but is subdivided into two non-contiguous sections, separated by a rift. The smaller, northern section (historically referred to as the Kirrenbourg) is one-tenth the size of the main section and lies directly above the town of Kayserberg, but in fact the two share the same soil type and exposure.

The Fallers have always been keenly aware of how different Schlossberg wines can be depending on exactly where, within the cru, the grapes are sourced. For this reason, the estate produces a number of different Schlossberg Rieslings. The wine made from vines growing on the nutrient-poor soils in the top section of the hill is called Riesling Schlossberg, while the wine made from the vines growing on the richer soils close to the bottom of the slope is known as the Riesling Cuvée Ste. Catherine (without the “Schlossberg”). In 1991, the estate began producing a third Riesling from the Schlossberg, the Riesling Schlossberg Cuvée Ste. Catherine (the subject of this vertical), made from the site’s oldest vines (roughly sixty years old) and planted mid-slope, in what is the heart and clearly the best part of the Schlossberg. In a more accurate, less politically-motivated grand cru classification (say what you will, but a grand cru eighty hectares large is pure nonsense), it is precisely this section of the Schlossberg that should have been limited to grand cru status, as it never suffers from excessive humidity or water stress (the latter can be a major problem in drought years given the Schlossberg’s exceptionally good drainage). Last but not least, in exceptional years (and also in very typical Alsace style where wine producers are incredibly driven to highlight even the slightest differences in soils or microclimates in each wine they make), the estate makes yet another version of Schlossberg Riesling, the Riesling Schlossberg Cuvée Ste. Catherine L’Inédit, but this is almost always an off-dry, even sweet, wine made from the super-ripest grapes from the mid-slope.

In my view, the Riesling Schlossberg Cuvée Ste. Catherine is Domaine Weinbach’s greatest dry Riesling. Like all great Riesling wines born on granite soils, it is large on entry with typical sweet herb and mineral-flinty notes, but finishes very long and precise (it is the length and precision in these wines that distinguishes the great granite sites from the merely good ones). What then separates the Riesling Schlossberg Cuvée Ste. Catherine from all other Schlossberg wines, elevating it to a non-pareil quality level, is a penetrating, laser-like acidity and dainty lemony-floral quality contributing a light-on-its-feet personality that is highly unique and immediately recognizable when tasting blind through a series of Schlossberg wines. Last but not least, these wines age splendidly, taking on a stronger flinty mineral character in time, but are practically never overtly petrolly or strongly reminiscent of diesel fuel. 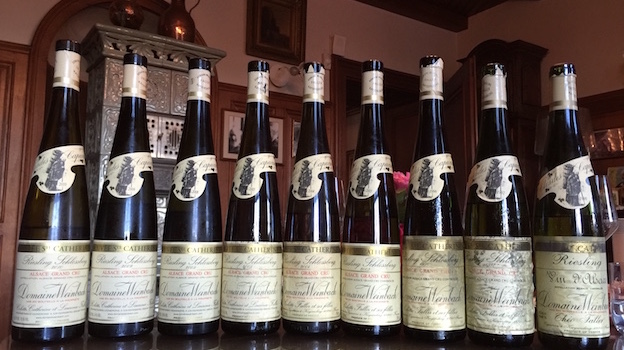 In conclusion, if it is safe to say that Théo Faller’s legacy has been well served throughout the decades by the meticulous, stellar and passionate work of Colette, Catherine and Laurence at Domaine Weinbach. It is just as evident that the great Riesling Schlossberg Cuvée Ste. Catherine has contributed in no small measure to that legacy. I tasted the wines in this vertical at Domaine Weinbach in August 2016.