Despite its short history, Le Potazzine is universally regarded as one of Montalcino’s top dozen or so wineries. The estate is known for remarkably refined Brunellos that speak of vintage, place and grape variety with utmost precision.

I could list many reasons why a visit to Le Potazzine is a must for all wine lovers. It’s not just a beautiful property but also offers a crash course on the potential greatness of Sangiovese, as Le Potazzine makes consistently precise, varietally accurate Brunello di Montalcino. And the estate’s reputation as a sure-fire source of excellent Sangiovese is further enhanced by its magnificent Rosso di Montalcino, easily is one of the best in versions of this wine readers will come across. 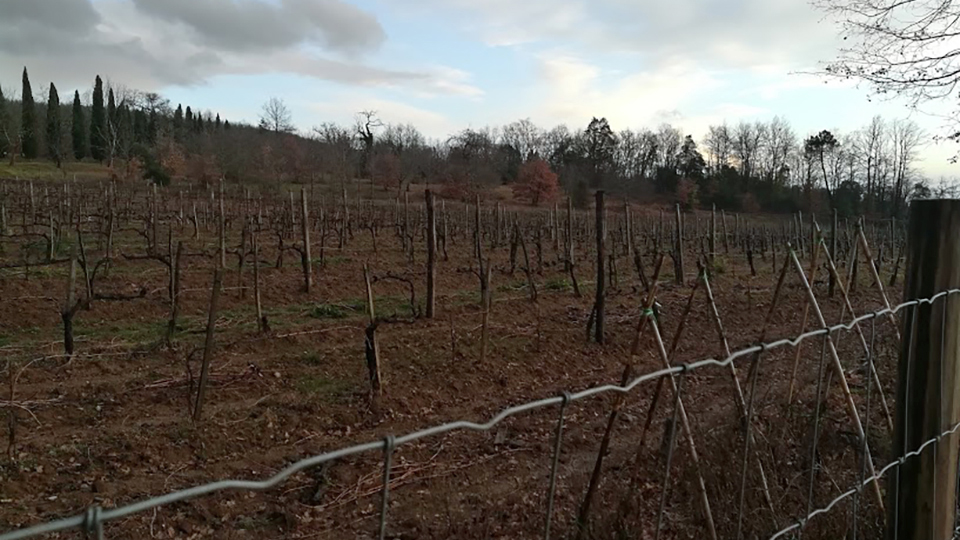 The vineyards at Le Potazzine in early February

The Estate and Its Vineyards

Le Potazzine takes its name from the little, constantly moving sparrow-like birds that are ubiquitous in the Tuscan countryside (the estate’s label depicts two cute little birds sitting side by side). As owner Gigliola Gianetti’s two daughters, Viola and Sofia, were just as busy and active as the small birds when they were little girls, their grandmother referred to them as her “potazzine” and so that became the estate’s name. Le Potazzine owns five hectares planted entirely to Sangiovese in the heart of some of Montalcino’s best zones. All of the property is registered for Brunello production, which means that when the estate chooses to make a Rosso di Montalcino, it really is a declassified Brunello. Total production is around 30,000 bottles per year, half of which is Rosso. The estate also makes about 4,000 to 5,000 bottles of Parus, an Indicazione Geografica Tipica, or IGT, wine sourced from rented vineyards in the Sant’Angelo in Colle area. 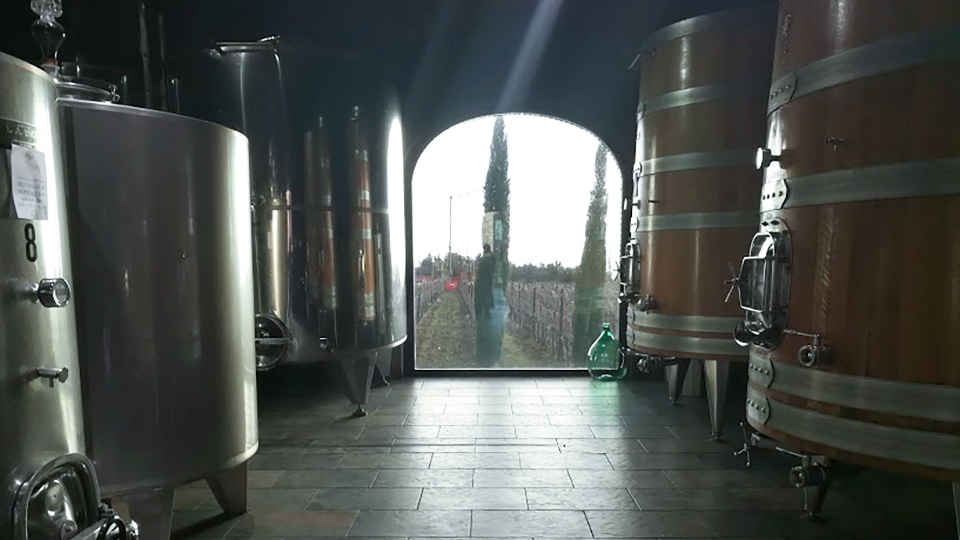 The Cellar at Le Potazzine

Le Potazzine’s Brunello is made from grapes grown in two specific areas of Montalcino: Le Prata (3.5 hectares of 13-, 16- and 50-year-old vines), where the estate is located, and La Torre (the vines here were replanted in 1998), which is in Sant’Angelo in Colle, just south of Montalcino proper. All of Le Potazzine’s younger plots were planted with different Sangiovese clones, while locally sourced massale selections were used for the 50-year-old parcel of vines.

Le Potazzine is a young estate, as many are in Montalcino. When it was founded in 1993 (the birth year of Viola, one of Gigliola and Giuseppe Gorelli’s daughters), Le Potazzine amounted only to a small house and a few vines. The first Brunello was made in 1997 from rented vines belonging to the Ciacci Bellocci family, whose holdings were close to the highly respected Lisini estate. Given that those vines (since uprooted) were planted in the 1940s, it is not surprising that Le Potazzine hit the ground running with their very first effort from the hopelessly overrated ’97 vintage, aided perhaps by a little beginner’s luck, which never hurts. Unfortunately, only 3,000 bottles were made that year. 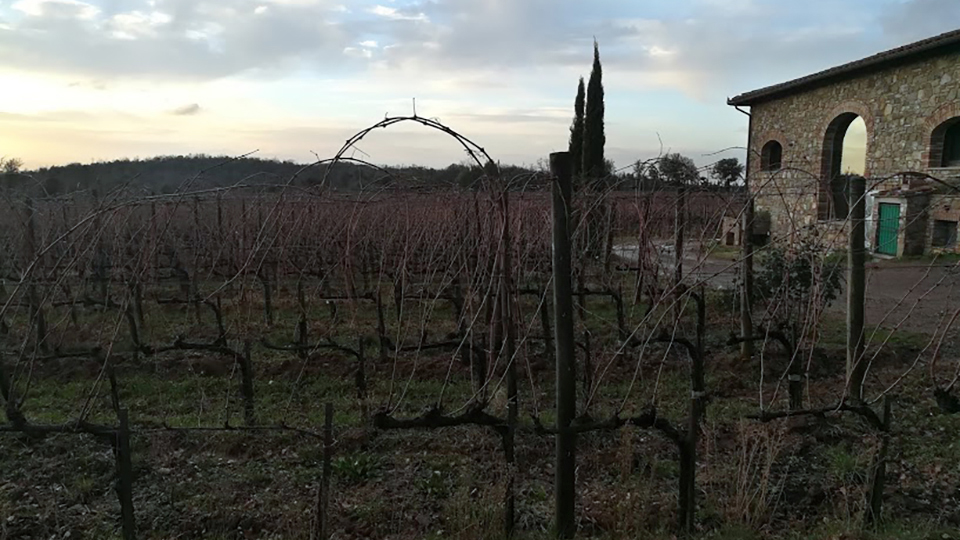 The Le Potazzine estate and vineyards

The 1998 was Le Potazzine’s second vintage and the first wine made from the original 3.5 hectares at Le Prata. Ninety ninety-eight was also the year in which Le Potazzine made their Rosso di Montalcino. Incidentally in 1996, Le Potazzine bought the La Torre plots (1.5 hectares) from Luigi Anania, owner of the La Torre Brunello estate. Back then La Torre was not viewed as the excellent source of Sangiovese grapes it is today, because at roughly 507 meters above sea level, the mesoclimate was too cool to allow for proper ripening of Sangiovese. Clearly, in these challenging times of encroaching climate change, that is no longer the case.

In the best years, Le Potazzine also makes a Brunello Riserva from grapes grown in one or both of its vineyard sites. Thus far, a Riserva has been bottled only four times: from the 2004 vintage (a Riserva made with grapes from La Torre), and in 2006, 2011 and 2015 (all three made entirely with grapes from the La Prata plots). Generally speaking, the La Torre vines give a more structured Brunello that is usually best in cooler, even rainy years, while Le Prata yields more refined wines that excel in drought years. Clearly, owning vines in both areas allows Le Potazzine to blend judiciously and to make better, more complete wines in difficult vintages in which the grapes in Montalcino don’t ripen uniformly. 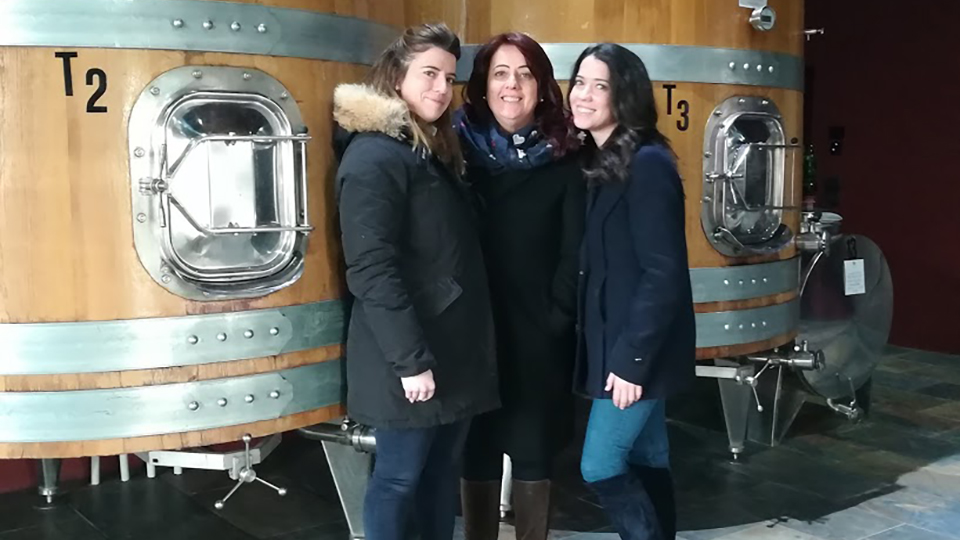 Gigliola Giannetti and her two daughters

The wines are very traditionally made, the product of long macerations and aging in medium-sized (30-to-50-hectoliter) Slavonian oak casks. Only indigenous yeasts are used and the wines spend considerable time in oak: usually 40 months for the classic and 60 months for the Riserva. All of the wines until the 2016 vintage were made by Giuseppe Gorelli (who had worked for 15 years in close contact with the late Giulio Gambelli, probably Italy’s greatest Sangiovese expert and a good friend of both Giuseppe and Gigliola). Today the winery is run by Gigliola and her two daughters. Since the 2017 vintage, the winemaker has been Paolo Salvi, who also consults at Monte Vertine and other well-known Tuscan estates.

The wines in this article were tasted at the estate in March of this year.