We need to talk about Fronsac. That’s the title of my imaginary novel that tells the story how Fronsac, once regarded as one of Bordeaux’s eminent appellations was usurped by Saint-Émilion and Pomerol. Fronsac is where Charlemagne constructed his fortress in 770 and Cardinal de Richelieu purchased land for his family in 1663. Its wines sold for higher prices than either of those aforesaid appellations throughout the 18th century. Then, in recent decades, as the stars of those neighbouring appellations aligned, Fronsac was budged out of the limelight. Thankfully, in recent years, several Fronsac wineries have begun delivering the goods. Writers like myself regularly extol their virtues, badgering those with myopic tastes to broaden them. This article is part of my ongoing campaign. Recent vintages of Château de La Dauphine have been impressive. 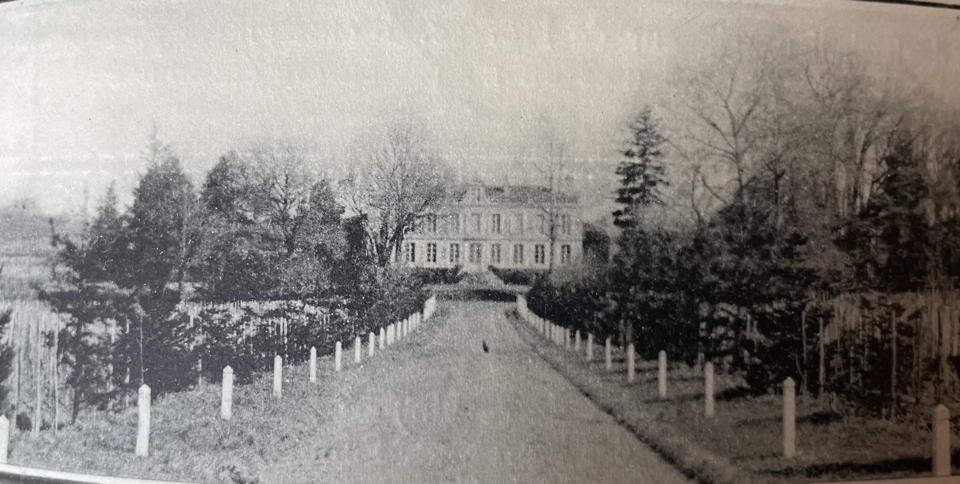 By coincidence, I found this ancient photograph of the château, probably taken around the turn of the century.

The château building was constructed between 1744 and 1750 by a lawyer, Jean-Baptiste de Richon. Not long afterwards, the estate came to prominence when Maria Josepha of Saxony, daughter of the King of Poland and the daughter-in-law of King Louis XV, resided there for several days. Her title was the “La Dauphine de France” (la dauphine is the French term for the wife of a crown prince). She never became queen as her husband died of tuberculosis. Still, before his death, they had several children including three future kings of France: Louis XVI, Louis XVIII and Charles X. The significance of her stay prompted the renaming of the estate.

The estate was owned by François-Régis Marcetteau de Brem until 1985, whereupon Château de La Dauphine was sold to J-P Moueix. In 2000, it changed hands once more when it was bought by Jean Halley, co-founder of the Promodes Group. Halley passed away in 2011, whereupon his son, Guillaume, took over and commenced a number of investments. In 2015, the Labrune family, founder of the tech company CEGEDIM, bought the estate and continued the program of investments, including the application of biodynamics in the vineyard.

Château de La Dauphine is now run by General Director, Stéphanie Barousse. I asked about her career path that led to all things Fronsac. “I did not come to my current position following the usual path,” she replied. “I arrived at La Dauphine 15 years ago, and it is where I began my career, where I have grown up and evolved into who I am today. I have been lucky, and I’ve had the opportunity to undertake all the jobs that are part of La Dauphine from the vineyard to accounts, sales to the winery. This is a major asset. It’s enabled me to become intimate with the property and its component parts that I’ve helped develop. I climbed the ladder over the years and became Deputy Managing Director in 2015. A woman at the head of the property was pretty unusual seven years ago.” 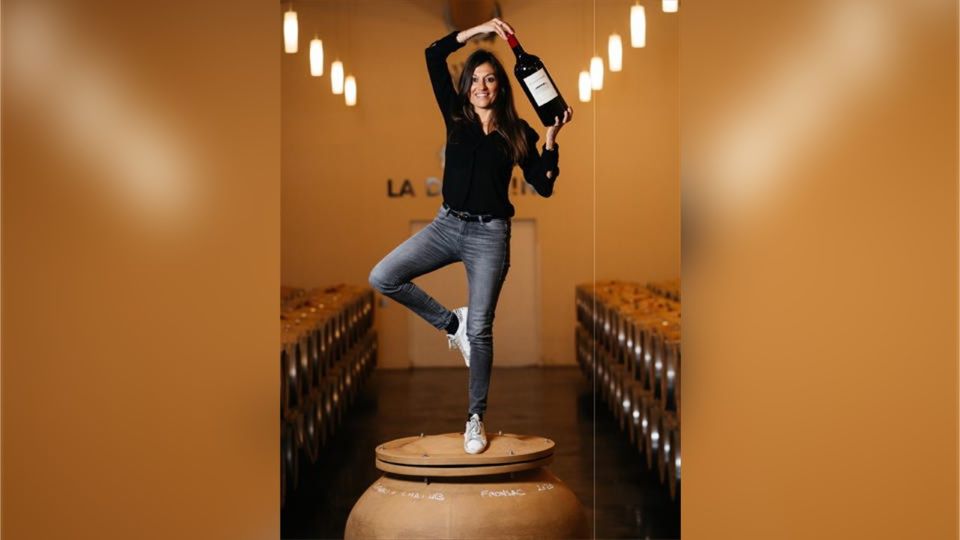 I could not resist publishing this photo of an acrobatic Stéphanie Barousse posing with a bottle of her wine. Next time I take a photo of Michel Rolland, I shall request a one-handed handstand.

At 53-hectares, Château de La Dauphine is one of the largest estates in the region. The original vineyard occupies a south-facing amphitheatre. The vineyard comprised of 40-hectares until 2016 when it was enlarged by their acquisition of Château Haut-Ballet in St. Michel-de-Fronsac. In July 2021, further expansion was announced after the purchase of the 13-hectare Canon-Fronsac estate of Château Vrai Canon Bouché, making it 66 hectares in total, one of the most significant in the Fronsac appellation. I asked Barousse to update me on this acquisition. “Part of the production will be integrated into Château de La Dauphine in 2022 since Château Vrai Canon Bouché will be organic. We are keeping the Château Vrai Canon Bouché name for the historical American market. Château Vrai Canon Bouché has exceptional terroir identical to Château de La Dauphine’s Grand Vin: plateaus with asteriated limestone, Fronsac molasse and very good exposure of the plots. Furthermore, a majority of these plots are planted with Cabernet Franc, which will allow us to increase its proportion in our first wine from 10 to 25%. Our objective is to produce a great Bordeaux with complexity, fine tannins, smooth, tight texture, length and balance. We now have to go beyond the classification to establish the property as a Grands Vin de Bordeaux.”

Given its size, unsurprisingly La Dauphine contains 14 different soil types. These broadly fit into three types: a plateau of clay-limestone above asteriated limestone, which comes from the Haut-Ballet parcels, an inclined of shallow Fronsac molasse and at the foot of the slope, more sandy/silt clay over a clay subsoil. In 2018, the vineyard consisted of 90% Merlot and 10% Cabernet Franc, though as already stated, this will change considerably with their recent expansion. Pruning is simple Guyot.

I asked Barousse about their massal selection program. “We have maintained a massal selection program for 20 years,” she replied. “This involves working closely with the nursery to preserve our selections now and for future vintages. The program is focused upon obtaining the 25% Cabernet Franc and Sancerre Sauvignon Blanc for the white wine both entirely from massal selections. These make it possible to offer more complexity in the Grands Vins de Bordeaux.”

Organic viticulture has been applied at Château de La Dauphine since 2012, certified by “AB” three years later. Two years later, the entire vineyard was converted to biodynamic viticulture, although they are not pursuing certification at the present moment. Tied with biodynamics has been their research into aquaponics. I asked what this was all about.

“The word ‘aquaponics’ is a combination of aquaculture - fish farming - and hydroponics - growing plants without the use of soil. Aquaponics is the growing of herbs, vegetables, and leaves (salads, spinach, etc.) in symbiosis with a fish farm. The excretions from the fish add nutrients to the water. Rich in organic fertilizer, this water is transported to the plant growing system. The plants absorb the nutrients necessary for their growth and purify the water, which is then returned to the fish. Aquaponics is still a relatively recent practice and is being embraced as a sustainable way of growing good quality fruit and vegetables while at the same time raising fish." 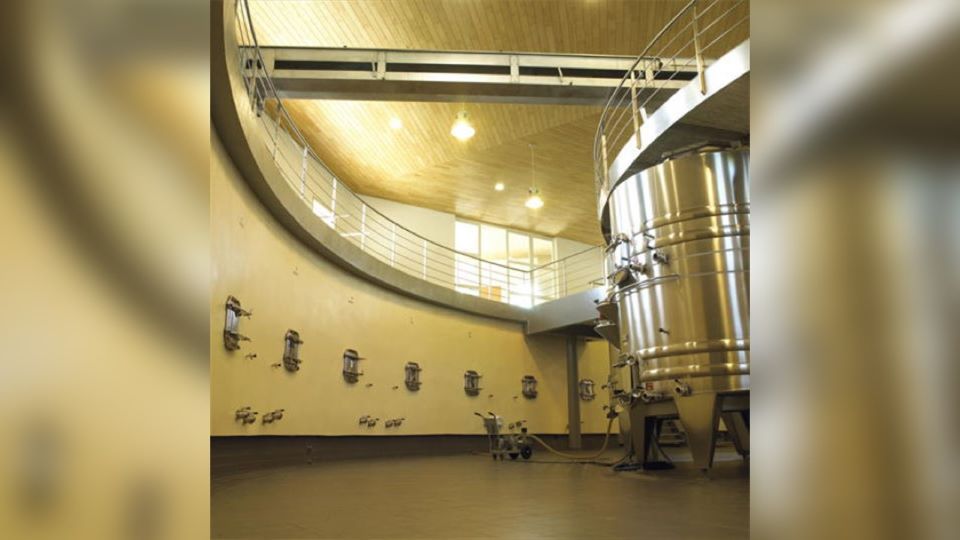 The fruit undergoes a double sorting upon entering the winery receptions with no optical sorting machines. The circular-designed winery is equipped with 26 concrete (along the same tulip-design as those at Cheval Blanc) and 16 stainless-steel vats that are 50-hectoliter in size. Fruit is transferred into vat by gravity, using a mobile rotating arm, and then undergoes a 30-day maceration. The wine is then matured for around 12 months in French oak barrels, around 30% renewed each year, three cooperages used (Taransaud, Seguin Moreau and 500-liter Stockinger). Given the size of the production, they use the space-efficient OXOLine system, which essentially allows winery workers to tackle whatever barrel they wish without disturbing others that you must do if simply stacked on one another. Michel Rolland was appointed consulted in 2011, duties handed over to his right-hand man, Julien Viaud in 2015. A second wine is produced, as well as a white and rosé. 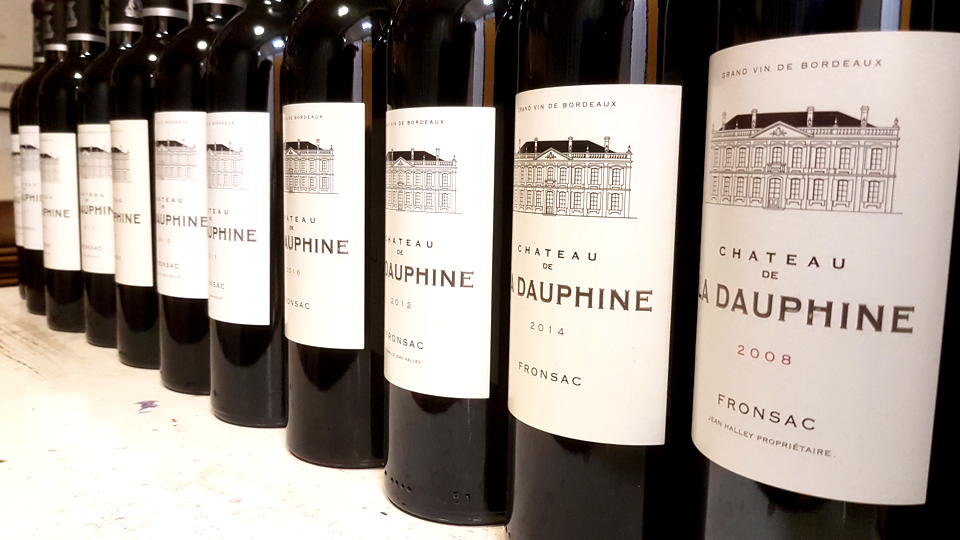 Château de La Dauphine is one of the leading Fronsac estates, one probably overlooked by some cognoscenti simply because its postcode is neither Pomerol or Saint-Émilion. That’s a shame because recent vintages such as the 2010, 2016 and 2018 stand equal to some of the top-ranking estates in those appellations. Pick of the bunch might be the exceptional 2015 and amongst older vintages, a 2005 that is evolving with grace. I often find Château de La Dauphine intense on the nose – no shy retiring wallflower – replete with black fruit occasionally tinctured by liquorice and/or dark chocolate.  Like many Fronsac wines, it is quite powerful and structured, deserving at least four to five years’ cellaring just to shave some of its tannic edges, though it has a propensity to age well over 15 to 20 years, possibly longer in benevolent vintages.