If there is a better set of white wines made in Italy than Miani’s Friulano, Chardonnay, Sauvignon Blanc, Ribolla Gialla and seldom-made Malvasia, I have yet to encounter them. Simply put, Enzo Pontoni’s wondrous, world-class wines have few peers. Unfortunately for collectors, however, they are made in homeopathically small quantities (only 1,200 bottles a year of the Ribolla Gialla, for example) and finding them requires serious effort.

The Pontoni home base is in Buttrio, in the Friuli Colli Orientali denominazione. The estate takes its name from Enzo’s mother Edda Miani. The Pontonis had always made wine, along with rearing livestock, but only began estate-bottling in 1981. Enzo Pontoni started working at the estate as a small child, as was commonplace in Friuli farming families in the old days. Eventually Pontoni took over full-time in 1989 when his father Nello passed away. In order to devote himself completely to winemaking, Pontoni gave up his career as an engineer. 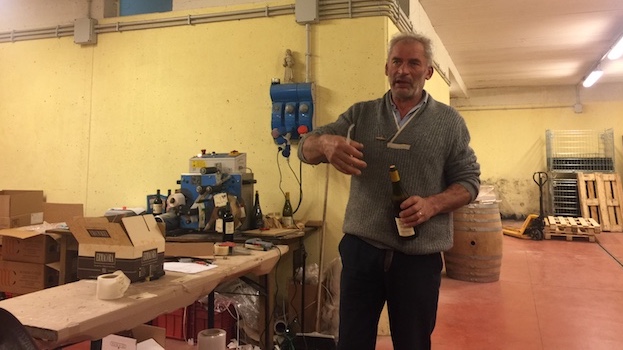 Enzo Pontoni in his simple unassuming  cellar at Miani

Miani’s vineyards are located mostly in the Buttrio and Rosazzo areas of the Colli Orientali, both of which are blessed with slightly warmer microclimates than other viticultural zones of Friuli Venezia Giulia (FVG). Originally, the estate consisted of just 3 hectares (7.4 acres) of vines, but today it spans 20 (49.4 acres), of which 11 (27.2 acres) are owned and 9 (22.2 acres) are rented, including some very recently planted parcels. About half of the estate is planted to youngish vines (i.e., around ten years old) and the other half to very old ones (50+ years). Pontoni grows Ribolla Gialla, Chardonnay, Sauvignon Blanc, Merlot, Tocai Friulano, and Refosco del Peduncolo Rosso organically. He has recently increased his plantings of Sauvignon Blanc and Chardonnay.

Buttrio has always been viewed as an exceptional place and the source of Friuli’s best reds, while Rosazzo has a long history of delivering some of the region’s—and hence Italy’s—best white wines. Pontoni’s vineyards are planted at roughly 100 to 300 meters above sea level, and while new vineyards showcase high-density plantings (9,000 vines per hectare), the density of the old vines is a relatively low 3,000 to 3,500 plants per hectare. Yields are minuscule, as the vines are pruned enthusiastically in the winter, and the draconian green-harvesting rarely leaves more than one or two bunches per vine. All of Pontoni’s wines are fermented and aged in small oak barrels, and they offer an uncommon combination of opulence and precision.

Tocai Friulano and Its Wines.

Pontoni makes roughly 4,000 bottles a year of Friulano, which makes it a large production by his standards. As a point of clarification, the names Tocai Friulano and Friulano should not be used interchangeably. In Italy the grape variety is called Tocai Friulano while Friulano is the name of the wine. This is because European law, in an effort to safeguard the Hungarian and Slovak wines made in the historic Tokaj production zone, does not allow any other wine to be called Tocai.  Alsace also had to stop using the Tokay-Pinot Gris moniker for its Pinot Gris wines for the same reason. Tocai Friulano is better known outside Italy as Sauvignonasse, and is also planted in places as diverse as Chile, New York State and New Zealand, among others. 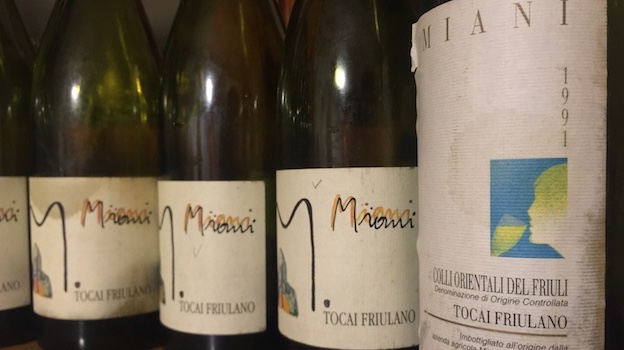 In Friuli Venezia Giulia, there are at least three different biotypes of Tocai Friulano: the more common yellow-berried grape, a much rarer green-berried version that gives wines with more intense aromatic power, and an even rarer red-stalked biotype whose potential has yet to be determined because no one owns enough vines to be able to make a monovariety wine. Depending on biotypes planted, as well as on the age of the vines, Tocai Friulano tends to give bright, light-to-medium-bodied wines with aromas and flavors of fresh citrus fruits, apple and almond. Delicate nuances of green fig, sage and rosemary are also common when the grapes are harvested earlier than usual, while notes of marzipan and honey appear when the fruit is allowed to become superripe. Another noteworthy fact about Tocai Friulano is that it is a cultivar characterized by thin skin, and therefore autumn rains, not uncommon in Friuli, always pose a threat to the year’s crop. It is also a reductive variety, and thus care has to be taken in the cellar to prevent off odors from developing.

Miani’s Friulanos display remarkable depth of flavor and texture, coupled with uncommon concentration and richness for wines made with this variety. And although they are luscious to the point of decadence, they are never heavy or unbalanced. Originally, Miani’s Friulano was a blend of grapes from vineyards in Buttrio and Rosazzo (the first vintage of Miani Friulano dates back to 1981), but beginning with the 2004 vintage and whenever possible, Pontoni has made two Friulano wines: Buri (named after the town of Buttrio where the vines grow) and Filip (the name is a Friulian dialect corruption of Filippo, the name of the family that had always tended these vines growing near Rosazzo). Vineyards in both sites are planted on classic marl and clay soils very typical of Friuli’s Colli Orientali, where they are referred to as ponca (Buttrio’s soils are richer in clay than those of Rosazzo). Given the very old age of the vines (50+ years), yields are a paltry 15 to 18 hectoliters per hectare. Happily, there will soon be a third Miani Friulano on the market, made from an old vineyard in Gramogliano that Pontoni bought and completely replanted in 2007.

Pontoni doesn’t destem, presses gently for two hours, then barrel-ferments using a combination of natural and selected yeasts, without interfering with the natural temperature of fermentation. The Friulanos spend 10 or 11 months in oak with minimal lees stirring; Pontoni has always used barriques (all with light to medium toast), with a maximum of 20% new, although in the last two vintages he has been introducing some 500-liter tonneaux. In his early winemaking days, Pontoni always put his wines through full malolactic fermentation, but he then stopped this practice in 2000. Since the 2013 vintage, he has turned back to full malos because he believes that the wines of the 1990s have evolved better.

Pontoni’s are the richest, deepest Friulano wines you will ever taste, offering an uncommonly complex, plush tasting experience that never becomes tiring. The vineyards in Buttrio tend to give a richer, fruitier wine, and so the Friulano Buri can offer notes of peach and pineapple and show a softer character (also true of the red wines made from grapes grown around Buttrio), but in my experience there is always a lovely minerality that shines through, even when the wines are young. By contrast, the Filip is usually more austere and slower to develop, typically revealing aromas and flavors of orchard fruits such as pear and apple, and it is always the more mineral of the two wines. Be aware that both Friulanos tend to be rather closed when young and really start to blossom about six years after the vintage, or even later. And while both wines are characterized by relatively low total acidity and high pHs, their high extract and alcohol levels and their sheer structure allow for great ageworthiness, in a manner not unlike that of top Hermitage Blancs. Pontoni is able to fashion Friulanos unlike those of any other producer—at once powerfully structured and freshly mineral, and therein lies his magic.

I tasted the following wines at Miani in November of 2016. All bottles were provided by Miani, except for the 2014, the 2012 and 2011 Filip, and the 2008 Buri, which I pulled from my own cellar to make this vertical tasting as comprehensive as possible.