“At the heart of this success are two forces of nature: the vines and Denis Durantou. The two are entwined.” – Pomerol by Neal Martin

The etymological root of Pomerol is poma, Latin for “seed.” Around 20 years ago, the seed of my passion for this appellation was planted as I stood by a roadside ditch in my cheap suit with my Japanese colleagues on an icy winter morning. I asked proprietor Denis Durantou what made L’Eglise-Clinet special. Without hesitating, he leapt into the ditch and scooped out a precious clump of clay, my answer oozing through his fingers. “Voilà la secret!” he exclaimed. A similar visceral response on the Left Bank was unimaginable. I instantly fell in love not only with L’Eglise-Clinet but with the entirety of Pomerol. In retrospect, that was the catalyst for an idea that later grew into my book, a copy of which lies spread-eagled on my desk right now.

I have written many articles on L’Eglise-Clinet over the years. They range from verticals focusing on different eras, to tastings through Durantou’s small but perfectly formed and perfectly priced portfolio, to insightful parcel-by-parcel tastings to understand the anatomy of L’Eglise-Clinet. The most memorable event occurred several years ago in the nearby village of Branne, where Durantou gathered a few friends and scribes to share a handful of remaining bottles from his grandfather’s cellar, including the fabled last Marie-Jeanne of 1929 Clos L’Eglise-Clinet. What a privilege to taste this piece of history! In fact, the highlight eventually turned out to be not the oldest bottle, but rather a magnum of 1955 L’Eglise-Clinet, which provided one of my most awe-inspiring vinous experiences to date. 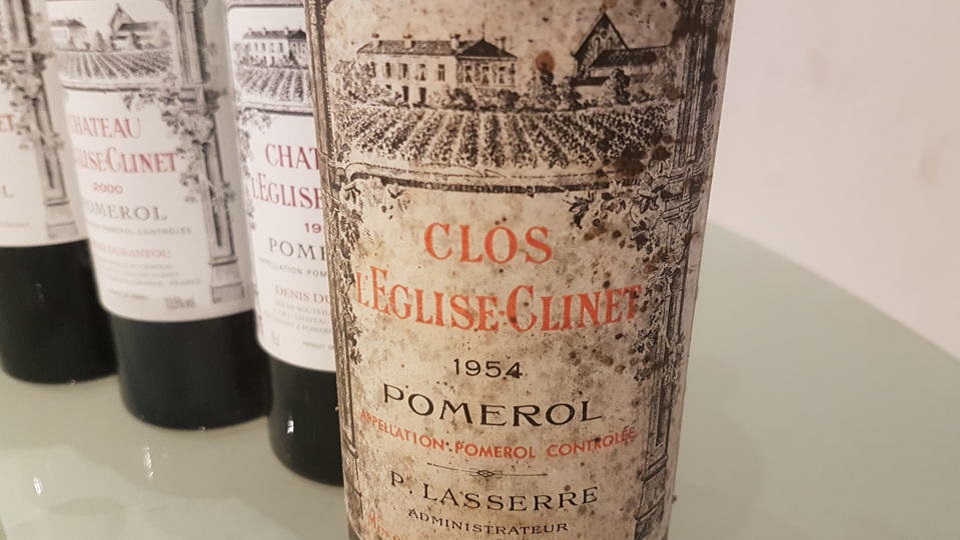 In the 1970s the quality of wine went off the boil. Durantou’s father Jacques was a high-ranking civil servant with only a passing interest in running a virtually unknown vineyard in a rural backwater – not unlike his own father, who since 1914 had appointed a local hand to run the winery. From 1942, daily management of the vineyard was handled by administrateur Pierre Lasserre, who shared his time with Clos René. Lasserre had one eye on eventually acquiring L’Eglise-Clinet and did not exactly encourage young Denis Durantou when he visited during the summer. But Lasserre had not reckoned on Durantou’s burgeoning passion for gastronomy and wine, which inevitably led to his installation at the family property in 1983. By that time, it was a fairly run-down winery, and not the only Pomerol estate overdue for investment and TLC. “There was an old de-stemmer that needed replacing, big concrete tanks and very old barrels,” Durantou explained when I interviewed him for the book. Essentially, the equipment was little changed from the 1940s, though Durantou did manage to install some basic temperature control in the vats.

For this writer, the 1985 L’Eglise-Clinet was a harbinger of things to come. It was the first vintage I tasted at the dawn of my career, and it triggered something deep within. It was not perfect, but my God, it had soul. A couple of years later, on one of my first en primeur trips, long before I published any notes, I visited the property and tasted the 1998 L’Eglise-Clinet from barrel. We congregated like parishioners around the barrels, and I vividly recall the frisson in the air as we caught each other’s eye, all of us silently agog. It was a watershed moment. Suddenly, one could see the true potential of this vineyard as one of the finest Pomerol crus, standing comfortably alongside the likes of Petrus and Lafleur. The 1998 was a combination of years of hard work, a benevolent growing season and the newly installed stainless-steel tanks that finally enabled Durantou to conduct more precise vinification. Thereafter I expected greatness from L’Eglise-Clinet, and the wine has indeed consistently ranked among the standouts of the appellation. 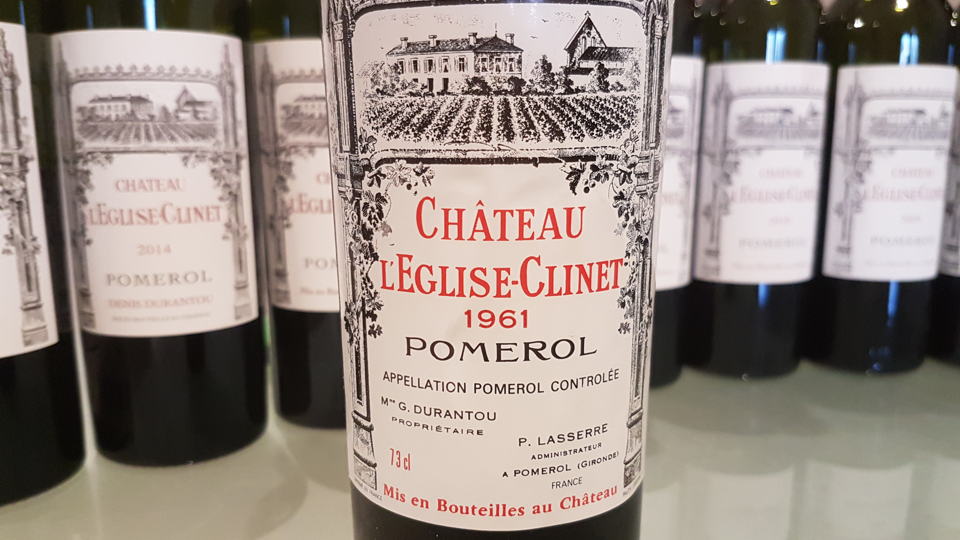 Despite its status, there is nothing ostentatious about the place itself. There is little signage, no electronic gate barring entry, no fanfare. You could easily drive straight past it. The two-story building houses the tasting room, the winery and the residence, in that order. A line of plane trees looks toward the sky-scraping steeple of the Pomerol church, and yonder the local cemetery. The vineyard covers just 4.4 hectares and is planted with 85% Merlot, 14% Cabernet Franc, and 1% Malbec, the oldest vines of the latter dating back to 1935. The tasting room itself is spartanly furnished and often displays Durantou’s wife Marie Reilhac’s latest collection of paintings, as depicted in the photograph below. Durantou tends to pick en bloc rather than piecemeal, sorting fruit within the vineyard; a sorting table was only installed in 2004. Since 2000 he has used selected yeasts during alcoholic fermentation to ensure that there is no sugar remaining and to keep a lid on volatile acidity. He regulates the temperature to around 26 to 28° Celsius with no pigeage, as he finds it too violent, instead employing just a couple of pump-overs a day. Malolactic is done in stainless steel vats because Durantou finds it easier to control the temperature. The wines are transferred into barrels from the Darnajou cooperage (“Darnajou forever,” as Durantou wrote in a recent e-mail) for around 16 to 18 months, and lightly fined before bottling. I asked Durantou whether the modus operandi had changed since I last wrote about the winemaking in 2012, and he simply and poetically replied that the people and the vines have grown old together. 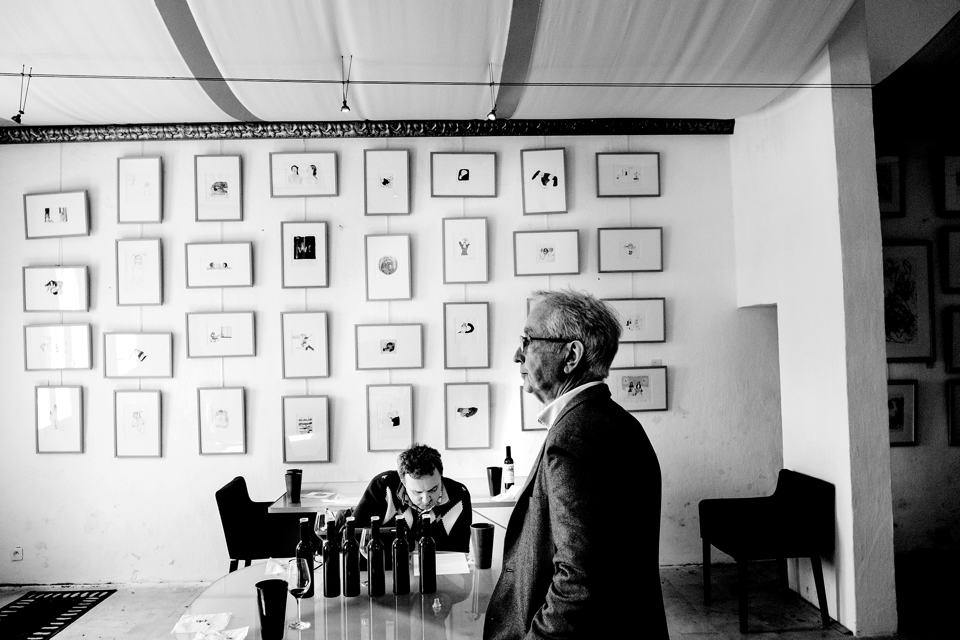 Last April, Durantou invited both Antonio Galloni and me to a vertical tasting of recent vintages, plus precious older bottles back to the 1950s. It was a rare occasion when we tasted together, since neither of us wanted to miss this opportunity. As a general impression, L’Eglise-Clinet bears similarities to Lafleur – not stylistically, since it contains proportionately less Cabernet Franc, but rather in being a Pomerol that the drinker must understand. It is not an obvious wine, and in some ways it is uncompromising. Occasionally in blind tastings, it resents being lined up as part of a beauty pageant and retaliates by showing less expressively than its peers. Only after a decade does it lose its inhibitions and recalcitrance, repaying the patient oenophile with a profound level of complexity. I will let the tasting notes speak for themselves; suffice it to say that recent vintages such as the 2010 and 2015 L’Eglise-Clinet are monumental. Even the most challenging growing seasons have been unable to catch either Durantou or his vineyard off guard, and off-vintages serve as a cost-effective way to experience this wine without a huge drop in quality. I augment these notes with a plethora of others from my Pomerol tome, in addition to other recently tasted vintages, such as my maiden encounter with the 1967 L’Eglise-Clinet, from a forgettable year when Pomerol was the solitary success. All together, these 42 vintages represent the most comprehensive vertical you will ever see, because many old vintages are rare as hen’s teeth, not to mention high-risk for counterfeiting. 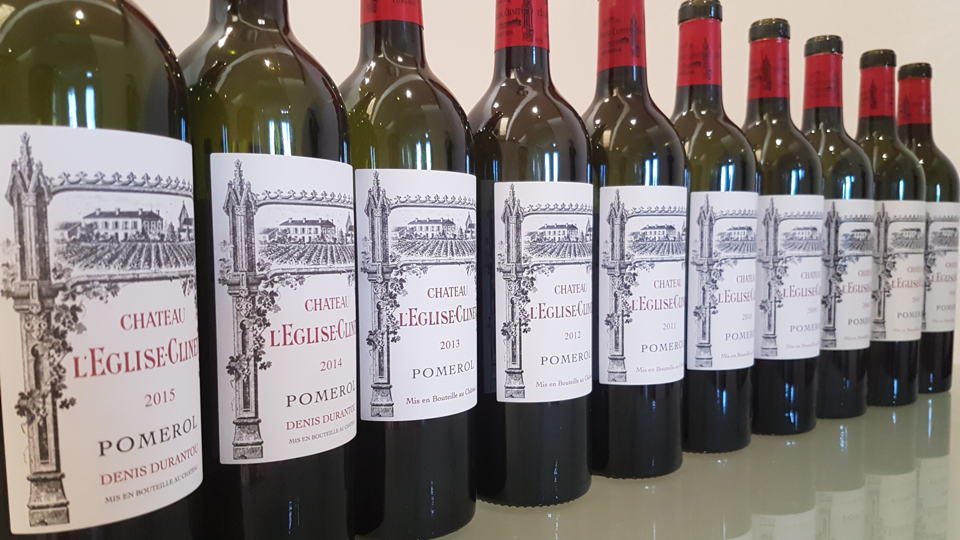 The most venerable vintages of L’Eglise-Clinet translated the potential of the vineyard, especially the heavenly 1955. But wine is a combination of vineyard and winemaker. It was Denis Durantou who realized that potential and elevated this Pomerol to the highest echelon. Durantou is a gifted winemaker on a constant and painstaking quest for the truth in his wine. He is a real vigneron in the sense that he spends his days out in the vineyard come rain or shine. Durantou has never bowed to fad or fashion. Instead, he has kept a true straight line in his pursuit of a vision for this wine, one that respects both terroir and the vicissitudes of the growing season. I will leave it there for now – short and sweet. Those in possession of my book will have all the minutiae they need, and I look forward to updating the details come the second edition. In the meantime, you can trust that Durantou will continue furnishing wine lovers with exceptional wines; and with his daughter joining the fold, a new chapter is about to open.

(Photograph of Denis Durantou at L’Eglise-Clinet in this report is copyright of Johan Berglund. His work can be seen at www.johanberglund.com.)