Over the last four decades, Castello di Ama’s Merlot L’Apparita has built an enviable track record that places it among the world’s most pedigreed wines. I was thrilled to host this charity event at Sotto Sotto as part of the Grand Cru Culinary Festival, which raised over C$3m for six research centers at Toronto General and Toronto Western Hospitals.

For the occasion, I chose twelve reference point vintages of Ama’s L’Apparita going back to 1988. Proprietor Marco Pallanti and his son, Arturo, were on hand to share their insights. The wines were opened 1-2 hours before the tasting and checked for soundness. A few vintages, including the 2006, were double decanted to help the wines open up a bit before they were enjoyed over lunch. 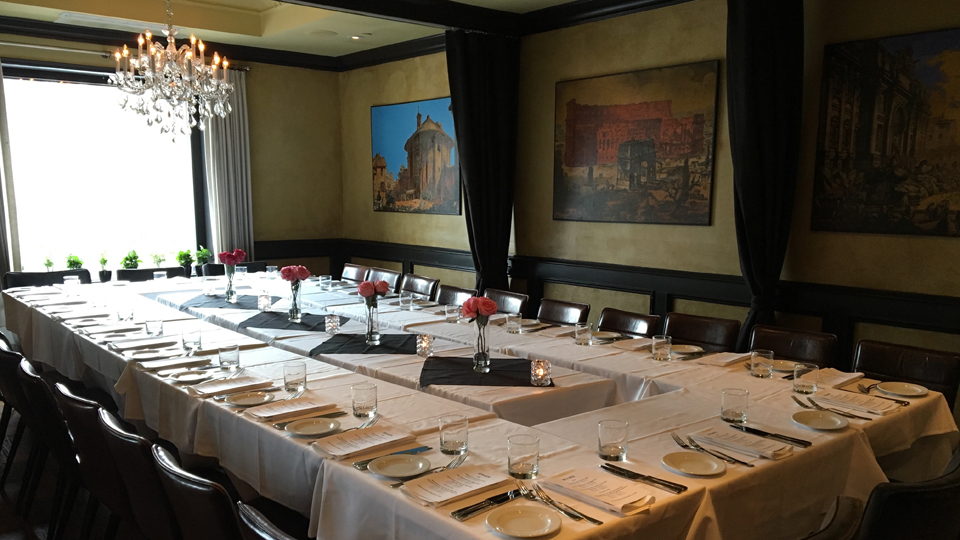 The room is set at Sotto Sotto, Toronto.

Castello di Ama is located in Gaiole, in the heart of Tuscany’s Chianti Classico appellation. Ama lies towards the southern edge of Chianti Classico, where the wines are often quite rich and bold, but here high altitude vineyards yield reds endowed with striking finesse and delineation that have also proven to age spectacularly well.

Pallanti and his wife, Lorenza Sebasti, are among the growers that led the early days of Chianti Classico’s modern-day quality renaissance. In 1982, Pallanti and Sebasti grafted Merlot onto existing Canaiolo and Malvasia Bianca rootstocks. The first Merlot harvest coincided with a weak year in 1984. More favorable conditions gave birth to the first L'Apparita a year later. Since then, the wines have often been spectacular, as this tasting once again made quite clear. Ama gives the Merlot about 3-4 weeks on the skins. Malolactic fermentation is done in French oak barrique. A clear stylistic shift can be seen in this vertical between the 1997 and 2001 vintages, where wood influence starts to come down meaningfully from the more extracted and oak-influenced style Ama (and many other wineries) favored in the late 1980s and early 1990s. For more historical perspective, readers might enjoy my article Castello di Ama: L’Apparita Retrospective 1985-2009 published in 2013. 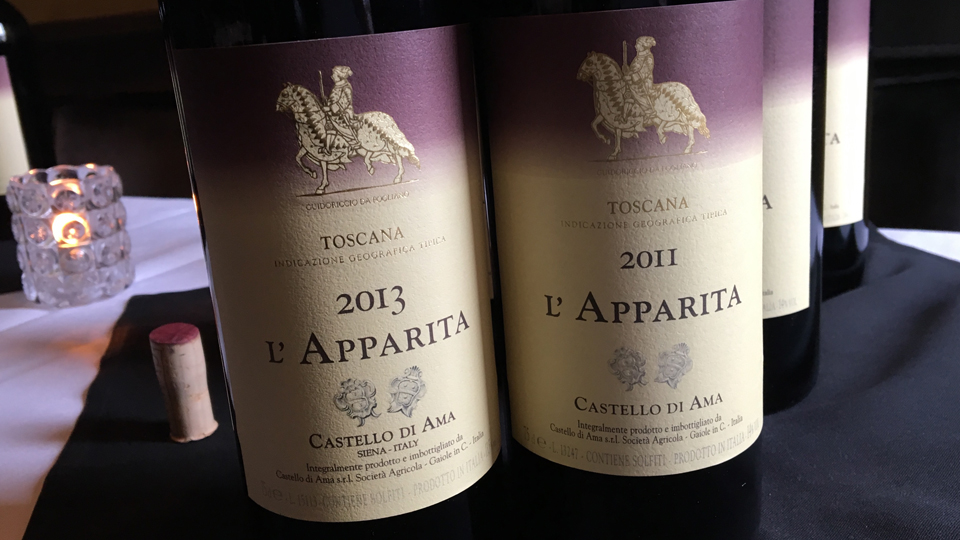 The 2013 L’Apparita gets this tasting off to a very strong start. Fresh, perfumed and totally sensual, the 2013 speaks to finesse above all else. In 2013, L’Apparita is feminine, medium in body and remarkably nuanced. It’s almost a shame to start the tasting with a wine of this caliber, but even after several hours pass, the 2013 retains its status as one of the most memorable wines of the afternoon. In a word: sublime. Ama’s 2011 L’Apparita makes for a fascinating comparison with the 2013 in this pairing. A rich, ample Merlot, the 2011 captures all the textural breadth of the warm vintage while retaining quite a bit of freshness. As good as the 2011 is, it can’t quite keep up with the 2013. The tannins in particular are large in grain, especially next to some of the other wines in this vertical. 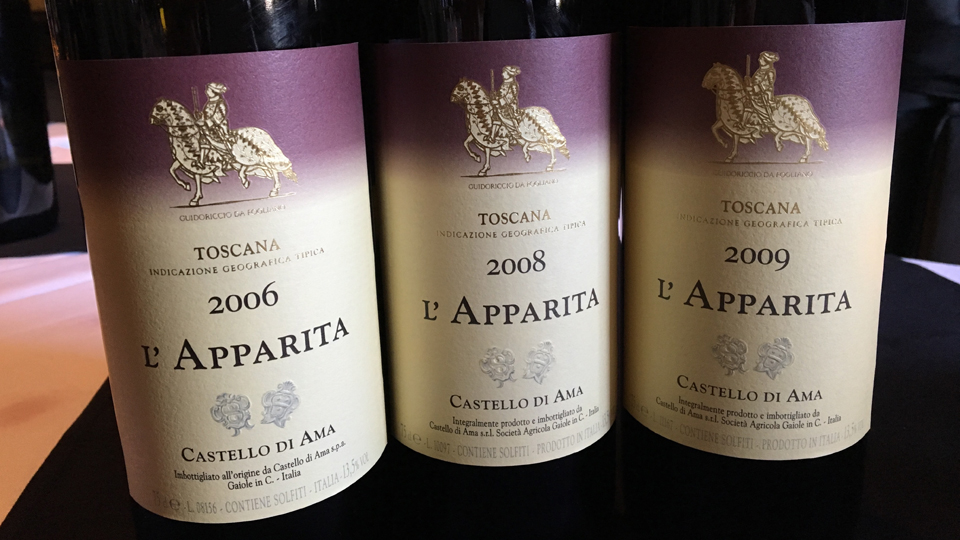 Powerful and dense in the glass, the 2009 L’Apparita packs a serious punch. There is an explosive energy to the 2009 that is impossible to miss. At the same time, the wine exudes freshness, especially within the context of the warm year. Expressive notes add lift to the radiant fruit in this super-expressive Apparita. A more exotic side of this site emerges from the 2008 L’Apparita. According to Marco Pallanti, the weather was quite warm in 2008. Rain towards the end of the season was more problematic for the later-ripening varieties, but that was not an issue for the Merlot. Black cherry, plum, smoke and licorice overtones add to an impression of darkness. Silky, beautifully ripe tannins and unctuous fruit with the natural richness that is achieved in late harvests add to the wine’s considerable appeal. This is one of my favorite wines of the afternoon. The 2006 L’Apparita is one of the most reticent wines in this tasting. Vibrant and explosive in feel, the 2006 comes across as very tight today. Readers will have to be patient, but all the ingredients are present for the 2006 to develop into a more expressive and representative Apparita with further time in bottle. 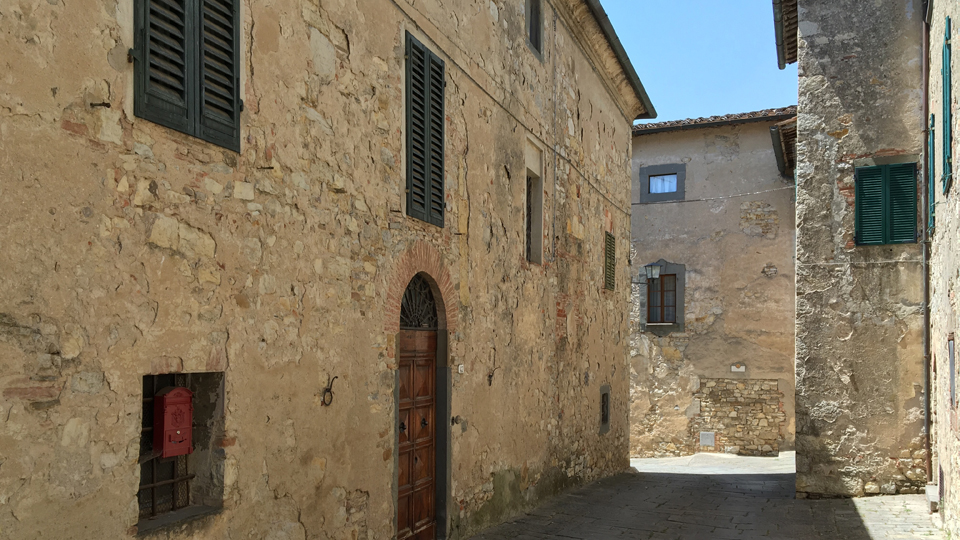 The star of the show, the 2004 L’Apparita is simply phenomenal. It is also the only wine in this vertical served from magnum, which almost certainly makes a big difference in how the wine shows. Fresh, nuanced and polished, the 2004 brings together power and finesse in a way that is thrilling. I went back to 2004 at the end of the tasting and it was even better. What a wine! The 2001 L’Apparita is a big, virile wine with exotic overtones that recall the 2008. Dark cherry, plum, mocha and smoke run through this decidedly virile, imposing wine. A more extracted style emerges in tasting the 1997 L’Apparita. Hints of tobacco, dried cherry, spice and crushed flowers are all indicative of a wine that has lost some freshness and that is close to being fully mature. In this tasting, the 1997 is the wine that marks a very clear dividing line between the style favored at Ama in the 1980s and 1990s and the choices that inform the wines today. 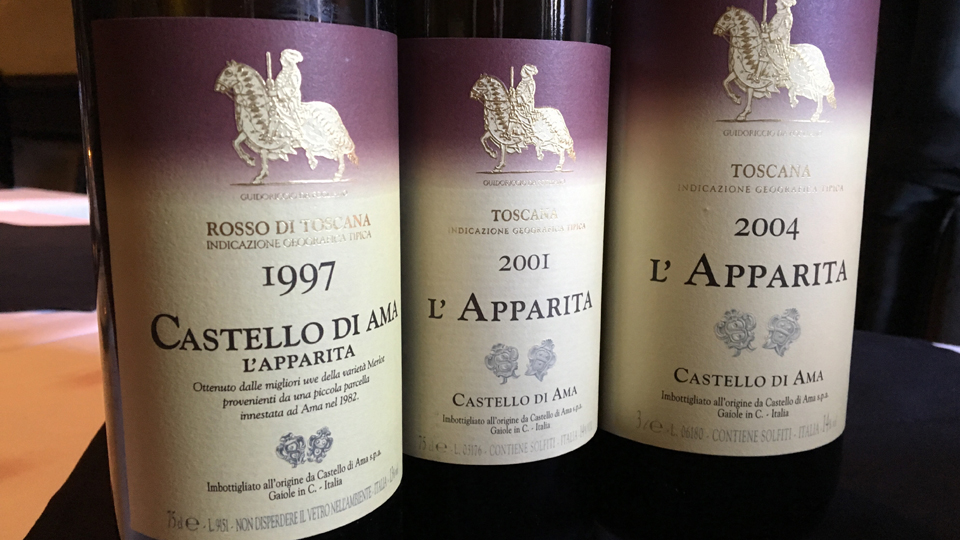 This last flight of wines from Ama’s early days is fascinating. The 1992 L’Apparita is a dark, powerful wine, especially for its age. Surprisingly intense, the 1992 has handled its oak beautifully and has also aged very nicely. Although the 1992 is fully mature, it also has enough freshness to hold for at least a few years. Tasted after the 1992, the 1991 L’Apparita is a touch more faded and oxidative in style, with a slightly gamy profile and dried out fruit that suggest it is fully mature. Even so, the 1991 has held up very nicely. The 1990 L’Apparita is the most impressive wine in this last flight. The warm, ripe vintage, considered legendary at the time, produced rich, unusually sumptuous wines. That is exactly what comes through here. Perhaps even more importantly, the 1990 has enough fruit intensity and structure to handle the extracted style and heavy French oak that was in vogue at the time. What a gorgeous wine it is. The 1988 L’Apparita is starting to fray, but, it, too, has aged very nicely. Game, smoke, tobacco and mocha notes are all signatures of a wine that is perhaps a bit past peak. Looking back, though, the 1988 has aged well considering the vines were quite young at the time and that these were very early days in Castello di Ama’s present-day history. 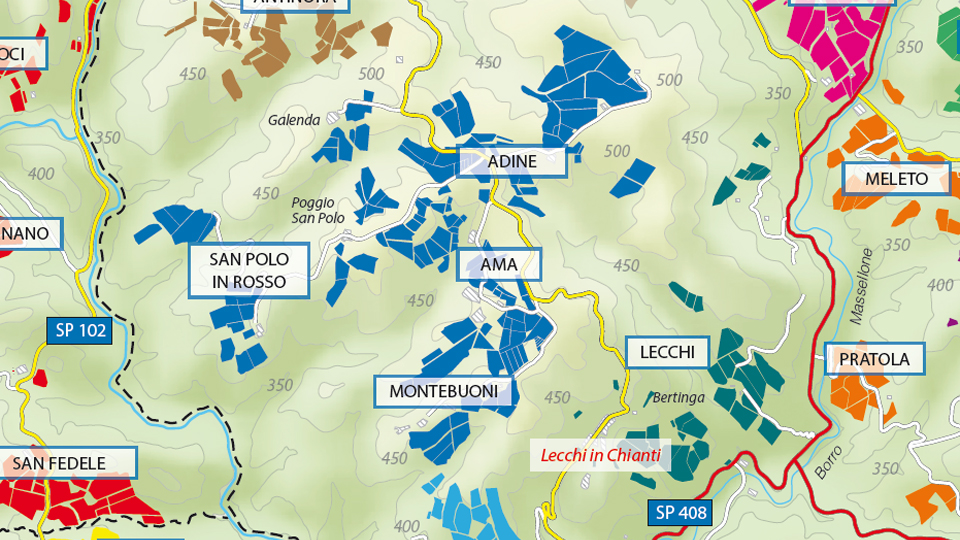 After the formal tasting was over I went back and revisited the wines. Clearly, these twelve vintages are all significant in L’Apparita’s history. They also represent a selection of the best of the best, rather than what could be called a more representative vertical of stronger, weaker and average years. In other words, my selection of twelve vintages naturally skews towards the better wines that have been made here over the last four decades. My personal favorites in this tasting were the 2013, 2008, 2006, 2004 and 1990. It will be interesting to repeat this tasting in another decade and see if the wines of the early 2000s, when the style at Ama shifts towards more finesse, fulfill their early promise. 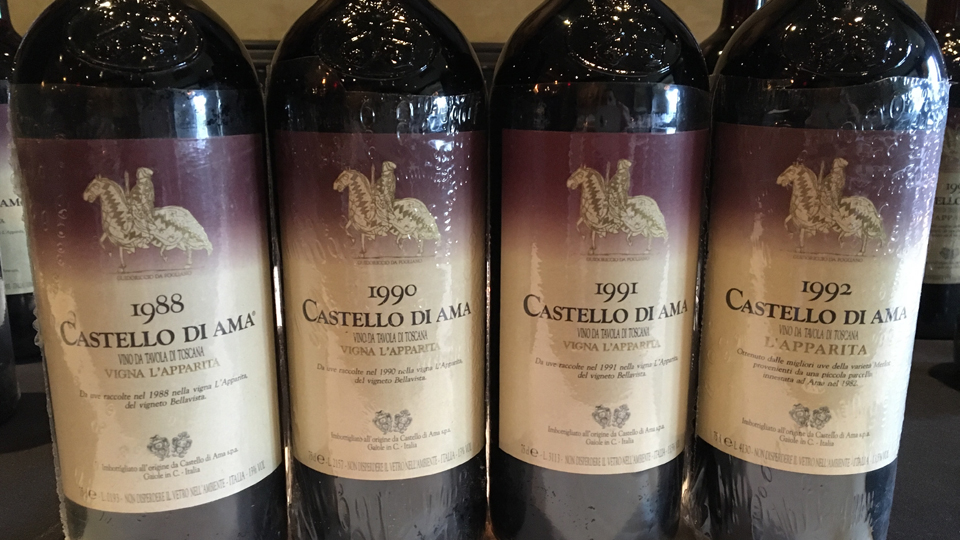 See All the Wines Tasted from Youngest to Oldest