If small is beautiful, then Clos Saint-Martin is the fairest of them all. Twenty years after first visiting this ideally located estate on the Saint-Émilion, I return to visit proprietor Sophie Fourcade and re-taste recent vintages.

Memories of my primeur trip back in 2000 are vague; it was a bloomin’ long time ago. But I do possess evidence of lunch at the minuscule but well-regarded Saint-Émilion property Clos Saint-Martin, in the form of a photograph, an old-fashioned one that you can hold that was developed at Boots, date digitized in the bottom left-hand corner. Presumably the reason for this visit was to meet proprietor Sophie Fourcade, who a few months earlier had accepted the running of the estate. I was unfamiliar with the name, but a vivacious 1964 Clos Saint-Martin made an impression, proving that despite its diminutive size, the estate could produce wines of impressive longevity. That’s no surprise given its prime location on the limestone plateau wedged between Beau-Séjour Bécot and Château Canon. Thereafter I regularly procured bottles, not only because of their quality, but because of the novelty of sharing a surname. Despite tasting every vintage over the last two decades and intermittently older ones, I had never returned to Clos Saint-Martin...at least not until a blustery, rain-sodden morning in February. 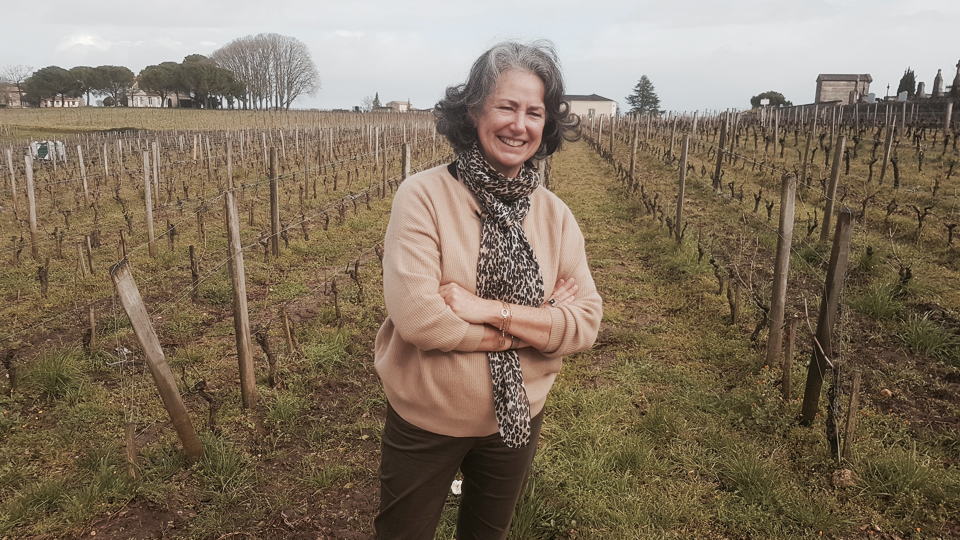 Fortunately, the clouds briefly cleared so that I could take this photo of Sophie Fourcade, with the vineyard of Clos Saint-Martin behind her toward Beau-Séjour Bécot.

As implied by its name, Clos Saint-Martin was originally part of the namesake Presbyterian Church. In 1850, the clergy amalgamated the diaspora of small churches into one central église in Saint-Émilion, and consequently Saint-Martin was deprived of its flock and its raison d’être. “My great-great-grandfather, Monsieur Malen, bought the vineyard and the house,” Sophie Fourcade told me. Given the small production, it might have been tempting to sell the fruit to the local cooperative or another estate, but Fourcade assured me that they have always bottled it themselves. Perusing wine literature, it is very difficult to glean much information from older editions of the Féret guide – nary a mention, in fact. Bernard Ginestet included Clos Saint-Martin in his Saint-Émilion book in a brief entry that says the vineyard blend included 70% Merlot, 20% Cabernet Franc and 10% Cabernet Sauvignon, indicating a shift toward Merlot in recent years.

“My mother, Madame Rieffers, came from Luxembourg and was in charge of the family’s three estates: Les Grandes Murailles, Côte de Baleau and Clos Saint-Martin. My first vintage was in 1998, the same year that [winemaker] Benoît Turbet-Delof started. I had worked as a lawyer for a bank and then took time off to raise my three children. When I decided to return to work, my mother asked me to come to Clos Saint-Martin.”

Fourcade has always been a congenial, personable proprietor with a welcoming smile. She was a great ambassador for her three estates, to the extent that maybe a few people did not realize how small was the size of production. Without first-hand winemaking experience, she hired Michel Rolland, who in recent years has delegated responsibility to one of the key members of his team, Julien Viaud. Under Fourcade’s tenure, Clos Saint-Martin has become a more consistent performer compared to its somewhat patchy track record in the 1980s and 1990s. Now it often matches or surpasses some of the appellation’s higher-profile names. Ironically, success in the 2012 Saint-Émilion classification prompted a tumultuous change. “We had the classification and Côte de Baleau was promoted to Grand Cru Classé. After this, [in 2013] the family decided to put the properties on the market. I wanted to keep all three within the family. I had worked so hard over the years, but I did not have a great deal of money.”

Clearly she was at odds with her co-shareholders, her brother and sister. After quitting her successful career in law, Fourcade had become devoted to her vineyards, which were now sold off for a healthy sum. Obviously there was a great deal of corporate interest, but to quote Fourcade in an interview at the time: “I did not want to sell to a faceless insurance company.” The second-best option was to find a kindred spirit, another winemaking family, and the three properties were sold to the Cuvelier family of nearby Clos Fourtet and Poujeaux in Moulis-en-Médoc. The only upside was that Fourcade initially continued to direct the properties under Matthieu Cuvelier and was eventually able to buy back Clos Saint-Martin, where she lives today, in one of the dwindling number of Saint-Émilion properties that serve as both winery and home. Her granddaughter was upstairs playing while I was conducting my tasting, and I thought how rare it is to hear children’s laughter in a château these days. 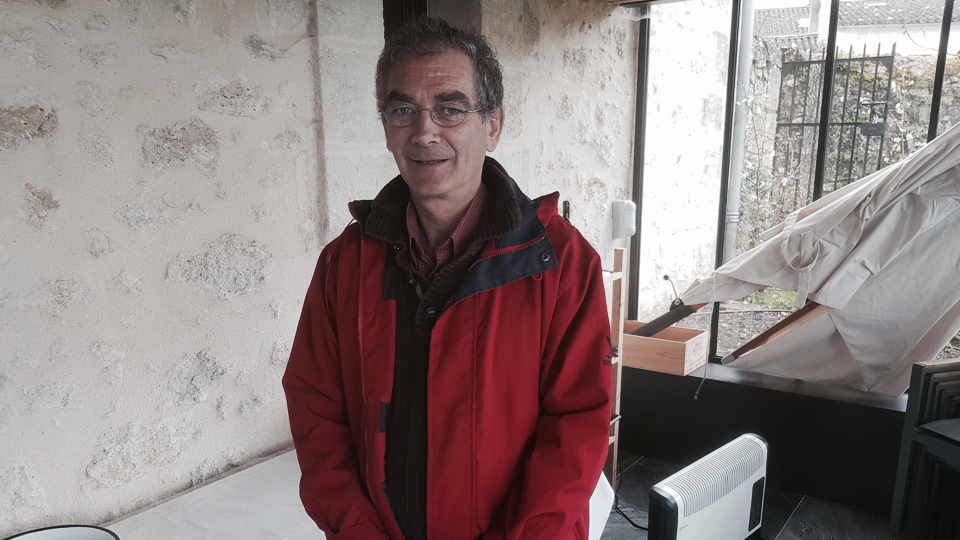 Winemaker Benoît Turbet-Delof, who has been at the estate for over 20 years.

“The vineyard covers 1.36 hectares on clay-limestone soils,” Fourcade told me as we surveyed the vines over toward Beau-Séjour Bécot. “There is a lot of limestone. The soil is around 50cm deep before it meets the bedrock, and in some places the rock is exposed on the surface. It comprises 80% Merlot, 15% Cabernet Franc and 5% Cabernet Sauvignon with an average vine age of 35 years.” Benoît Turbet-Delof explained that they use 5BB, 41B and Fercal rootstock, the latter on the higher part. There is an organic approach to vineyard husbandry, though they reserve the right to use chemical products as a last resort. A horse is used to work the vineyard in order to minimize soil compaction, a much easier task for their equine worker compared to the large estates on the Left Bank.

When I ask whether the diminutive size of the holdings means that the harvest is rapid, Fourcade immediately corrected me. “The harvest is not quick,” she insisted. “In our minds we divide the vineyard into six parcels, each one harvested when we want. It can be two hours one day and three hours another. We employ 10 pickers and there can be 10 to 12 days’ difference between the young Merlot and the Cabernet Franc.”

The tiny size of the vineyard means that Clos Saint-Martin has applied a Burgundian approach to vinification, not because it is fashionable but because it is necessary. I was shown around the winery that lies below Fourcade’s house and consists of just two or three adjoining rooms with thick whitewashed walls, similar to what I commonly see in Burgundy rather than Bordeaux. Turbet-Delof explained that they used to have two vats that would each contain around half of the total production. It meant that the timing of picking was extremely difficult, since you had to make sure the vats were filled, and even that cannot be guaranteed since it is subject to yield.

“Since 2008 the grapes go directly into the barrels,” he explained. “It is much more precise. The barrels rest on wheels to conduct the remontage [sometimes known as the “OXO” system]. We have always used 100% new oak because it is better for vertical integration. Because the temperature of the fermenting wine is warm, around 27-28°C, osmosis between the wood and the wine is very interesting in terms of formation of tannins that polymerize quickly.”

“We use pigeage for the amphora. These were introduced with the 2015 vintage. We currently have three that were baked at 1,200°C, equivalent to around 20% of production, though we are purchasing a fourth where the clay is baked at 1,600°C. It will be interesting to compare them, as at higher baking temperatures, the pores in the clay are more closed and reduce micro-oxygenation. We want a soft vinification without too much extraction, as the terroir is very strong. We use different cooperages: Demptos, Taransaud, Raymond, Seguin, Radoux and, of course, Saint-Martin. The racking is done three barrels at a time. We use a lot of vin de presse because we find that it is very positive for the structure of the wine. It can represent around 30% of the blend. The barrel maturation is between 18 and 20 months and we produce around 5,000 bottles each year, with no second wine – we’re too small. The three crescent moons on the label are the family crest.” 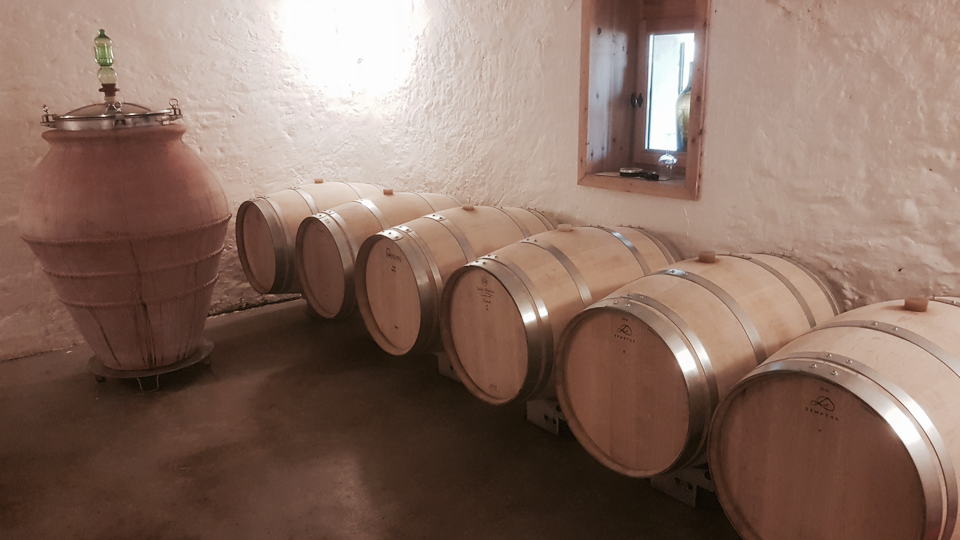 Although the quantity is very small, I have always felt that the quality of Clos Saint-Martin merits its own article, however brief. I have only tasted three or four bottles predating Fourcade, and to be honest, the aforementioned 1964 aside, the wines were adequate but nothing special. Fourcade and Michel Rolland must be credited with providing much more consistency and realizing the potential of this propitious location. The style has usually leaned more fruit-driven and richer, while the use of 100% new wood results in an oakier style that can discourage those seeking a more “classic” wine. However, the bottles that I have tasted reward cellaring.

Recent vintages have been well worth hunting down. The 2010 Clos Saint-Martin pips the 2009 in terms of superior definition and structure, underpinned by an outstanding line of acidity, although the dark horse of the vertical at the château is the excellent 2012 Clos Saint-Martin, which has improved considerably since I last tasted it. The 2013 is the weak link in the pack, although that applies to most properties in that lamentable growing season. The 2014 was not included in the lineup, as Fourcade told me they had no bottles remaining in the cellar, but subsequent vintages have all been top-drawer, including the 2017, which transcends the limitations of the growing season. 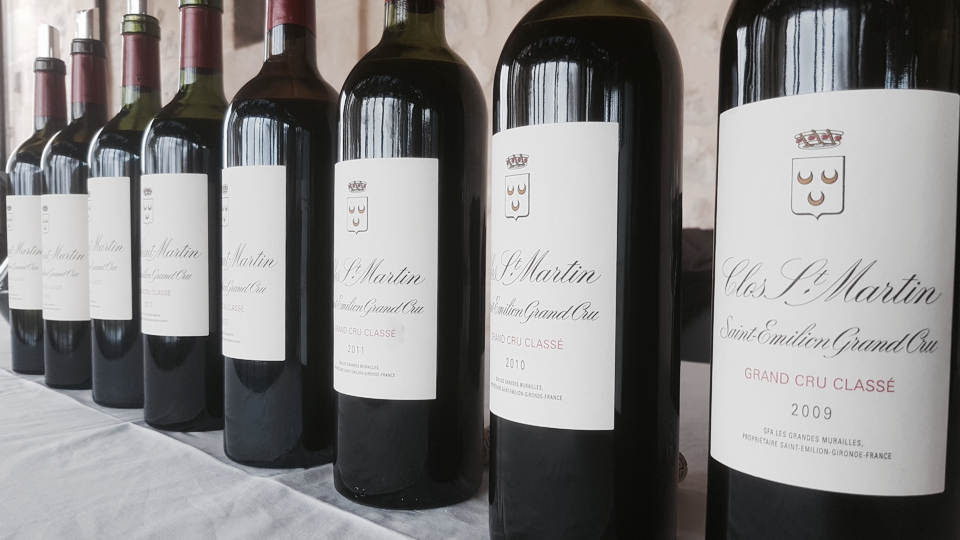 It was a pleasure to return to Clos Saint-Martin after two decades. It might be one of the smallest crus in the appellation, but since when did size matter? It is a great pity that Fourcade had to relinquish her family’s other two properties because they made an interesting trio. At least she was able to keep one of them and remain part of the landscape, a bit of Burgundy in the limestone heart of Saint-Émilion. Oh, and by the way, we are not related.