Montalcino has been ever-changing these last few years, with vintage after vintage of torridly dry weather and slight variations of very hot temperatures. For this reason, many producers question what Brunello will mean to consumers down the road and if they need to look to another method to communicate the importance of their terroir. However, there is still a vintage on the horizon that reminds winemakers of a different time, an era when the growing season could be called warm, or even cool, instead of hot, when looking to the sky and begging for water wasn’t part of the daily repertoire. That vintage is 2018; however, just because the weather didn’t attempt to bake the fruit on the vines doesn’t necessarily mean that 2018 will be considered a classic. It’s time to solve the Rubik’s Cube that is 2018 Brunello. 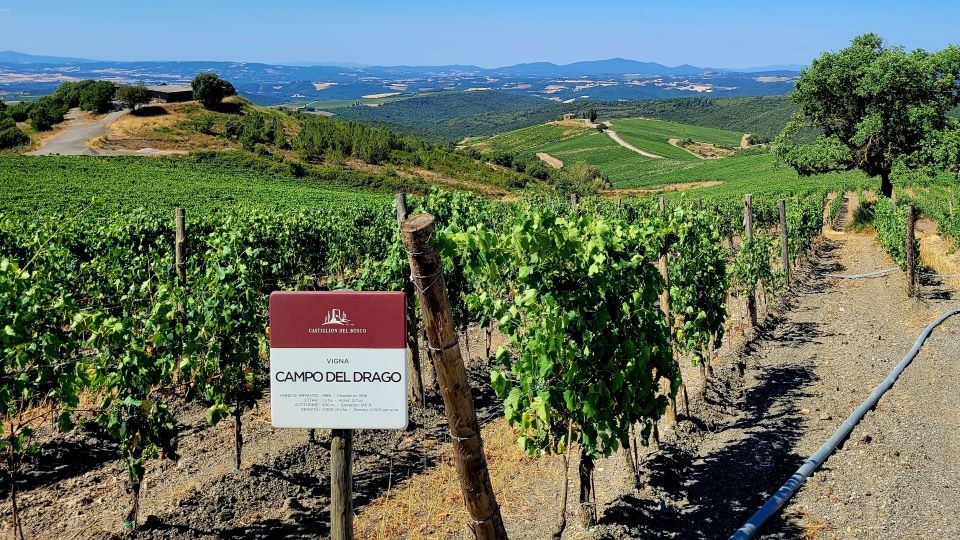 At the top level, many of the 2018 Brunellos come across as quite Burgundian in nature, where a combination of vividly dark, ripe fruit, balanced acidity and refined tannins add a brilliant dimension that shines already today yet promises a steady and prosperous evolution over time. At the lower level, and sometimes in the midrange, the wines often remind me of Beaujolais or a lighter-styled Rosso. They are charming and fruit-forward, like a basket of fresh berries, followed by a delicate and often-semisweet expression on the palate, but lacking the depth of concentration and tannic structure to mature over time.

The big question is: considering how pleasurable it is to taste the majority of these 2018s today and how much easy drinking they are sure to provide over the short term, should they really be labeled and marketed as Brunello di Montalcino and carry the price tags that come with that name? When thinking back to the release of the 2018 Rosso di Montalcinos and just how gorgeous and balanced those wines were and continue to be, I started to question the application of extended oak aging and macerations combined with the average character and fruit quality of this vintage. During my visit to Montalcino in July of 2021, several insightful producers had already moved their 2018 Brunellos from barrel into stainless steel or cement because they realized that the wine would only be hurt by longer oak aging. It’s also of note that many estates decided not to bottle a Riserva in this vintage, choosing instead to bolster their other wines, which is a move I respect greatly and have positively experienced when tasting the top-level, straight 2018 Brunellos.

With that said, there is still a lot to like about 2018. Let’s get something out of the way first. Does Brunello have to be a 20-year-old wine to be an excellent wine? I say no. Do we judge Burgundy, the Rhône and California only on their likelihood to mature positively over the course of decades? Or do we look to their depth, balance and unique traits that provide fascination and satisfaction or displeasure? So why do we type-cast Brunello in this way? Marketing over the years telling consumers that the best Brunello is aged Brunello is actually now hurting more than helping, and will continue to be a problem with future releases.

There needs to be a paradigm shift, where the consuming public can look to the best producers’ Brunellos in a vintage like 2018 and be satisfied to know that they will overperform, overdeliver and thrill for whatever their lifespan might be. My thoughts go to the northeast, where producers such as Il Marroneto, Canalicchio di Sopra, Livio Sassetti - Pertimali, Le Gode, Altesino and Le Chiuse all made unique, beautiful wines that should not be missed. Are they classic representations of these properties? Not when measuring by the wines of ten years ago, but I’d feel like a fool if I missed placing them in my own cellar. The same goes with producers as we move south, such as Le Macioche Famiglia Cotarella (their 2018 shows the potential of this estate under new management), Le Ragnaie, San Polo, Talenti, Argiano, Il Poggione, Mastrojanni and Uccelliera; all have created distinctive wines that will be cherished for years to come. More estates could be added to the list, and it would be a shame if 2018’s overall success, whether good or bad, deterred readers from experiencing these standout producers. 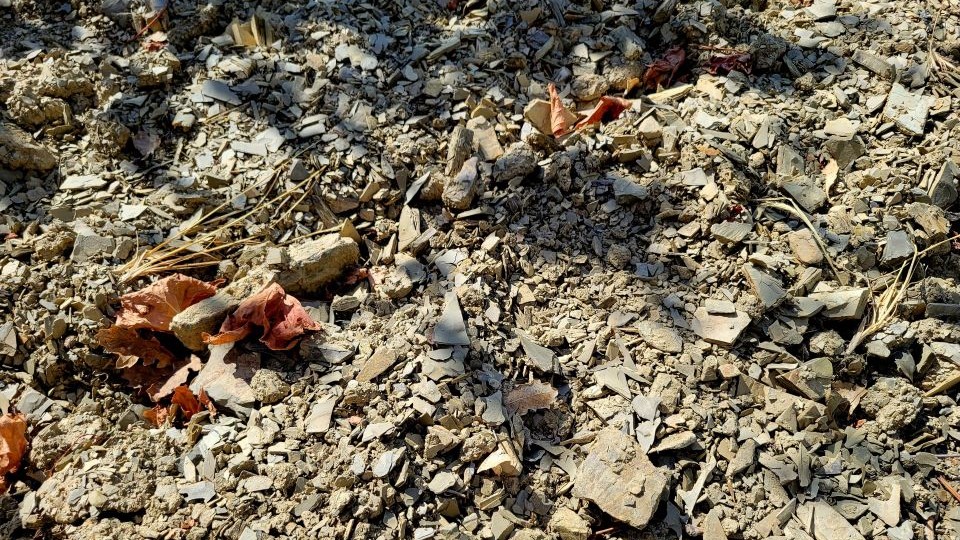 Galestro soils at the top of Montosoli.

Another important point regarding 2018 is that the average quality of mid-level wines is higher than in the past. There are certain properties whose wines usually come across as overbearing, over-styled and aggressively tannic, yet they produced a beautiful and balanced 2018 Brunello. But on the opposite end of the spectrum, there are classic producers whose wines in this vintage come across as a pale and diluted version of the house style. While tasting the 2018s over the past few years, in-depth this summer and then again this fall, the word that came to mind repeatedly is “idiosyncratic”. Even within one producer's portfolio, it’s common to find a vast difference in quality from one bottling to another. In the end, that’s why I taste multiple times, in hopes that the notes will provide readers with the best possible assessment of the vintage and individual wines possible. Read the notes and producer profiles where available. If selective, I think consumers will find a few gems within the 2018 vintage.

How did we arrive at the wines before us today? Two-thousand eighteen is very much a question of both location and producer. Interviewing winemakers regarding the year can often feel like a futile exercise. One will call it a warm vintage, and another will call it a cool vintage (one even described it as a continental vintage). More than a few producers in the north reported it as an easy or normal harvest, unlike what they’ve witnessed over the past four years. Most will agree that it was rainy and challenging due to humidity which created a threat of disease and required diligence in the vineyard, but some will spin that the rain helped to balance the warmth. The reality is that this could be called a cool or warm vintage depending on your perspective and location. Considering the excessive heat and dry conditions of 2017 and how much warmer and dryer the following four years have been, it’s easy to look back on 2018 as the last “cool”-”er” vintage.

The more significant impact was the rain and location from northeast to northwest and southeast to southwest. (Again, I will take this opportunity to get on my soapbox and implore the powers-that-be of Montalcino to consider zone and mapping.) As in 2017, conditions in the north drastically differed from those in the south due mainly to harvest periods. When the rain came in September, grapes on the vines in the south were ready to be picked, while those in the north had as much as two weeks of cool and dry conditions to recover. With that said, there are many successful Brunellos in the south. Alessandro Bindocci of Il Poggione, who produced one of the vintage's top wines, shared that there were “sporadic rainy days in September, but mistral winds, typical in the Sant'Angelo in Colle area, allowed for healthy and ripe grapes.” Il Poggione’s decision not to produce a Riserva in 2018 greatly benefitted their estate Brunello. 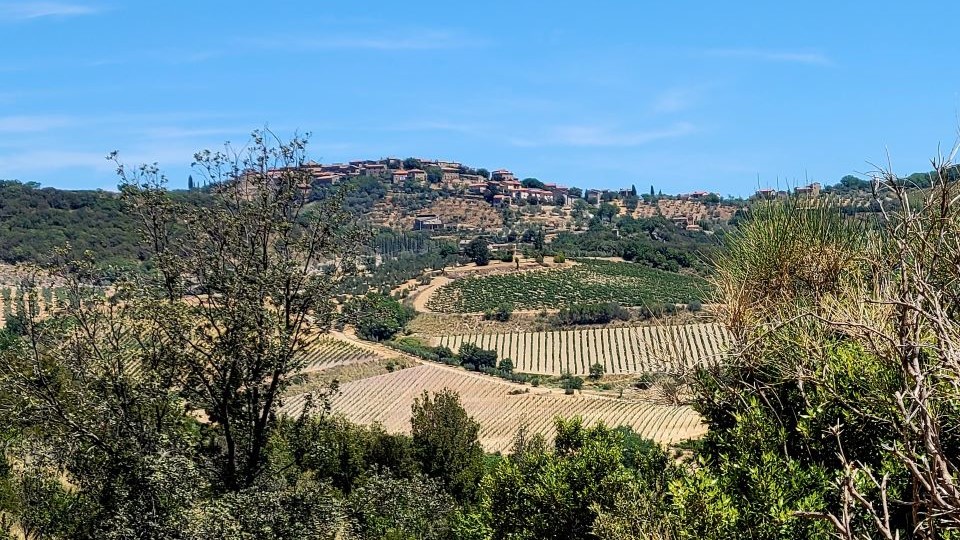 The southeast of Montalcino looks out toward Castelnuova dell'Abate.

I’ve heard of many comparisons between 2018 and 2013, which I can see in the aromatic profiles, yet the 2018s lack the same depth and balanced structure. Francesco Ripaccioli, of Canalichio di Sopra, explains 2018 as a “site-transparent vintage” (this may hold true throughout much of the northeast) and a “vintage among those with great aging potential.” I can see this specifically with his wines but not for all wines throughout the region. In the end, only time will tell, but when tasting Brunellos that could be mistaken blind for fruity Rossos, it makes me wonder what the wines will be like in eight to ten years.

The Question of 2017 Riservas

In my report last year, Jekyll and Hyde: 2017 Brunello di Montalcino and 2016 Riservas, I stated, “...the 2017 vintage in Montalcino was torridly hot and dry through the entire summer, which interrupted the growth cycle, pushed sugar levels, thickened skins and prevented proper phenolic ripeness… producers needed to dig deeply into their bag of tricks. They needed to be in the vineyards working the soils, tending to leaf management, and anticipating proper harvest times. They needed to be open to changing the techniques they use in their cellars, including, but not limited to, shorter macerations, lower temperatures in fermentations or drastically reducing the time that the wines spent in wood.” I will reiterate that a tasting of 2017 Brunello Riservas can be a very painful experience, with searing tannins and grape-matter concentration that could leave the palate feeling like it had just undergone an acid bath. That said, there are some highly successful Riservas in this vintage. The problem is that they are in the minority. When writing my last article on Montalcino, I questioned if winemakers would ever contemplate a Riserva in 2017, considering the extended aging in wood that is typically associated with the classification. To my surprise, many more did than I expected. I consider the total of 35 Riservas submitted to be high. Unfortunately, in many cases, the wines showed as I had anticipated: overly dried-out, overbearing, aggressively tannic and clenching. However, a few producers managed to find equilibrium, one tremendous standout being Salicutti, which makes sense, as their 2017 Brunellos also have superb balance. In the end, there are only a handful of wines in the Riserva category worth chasing. 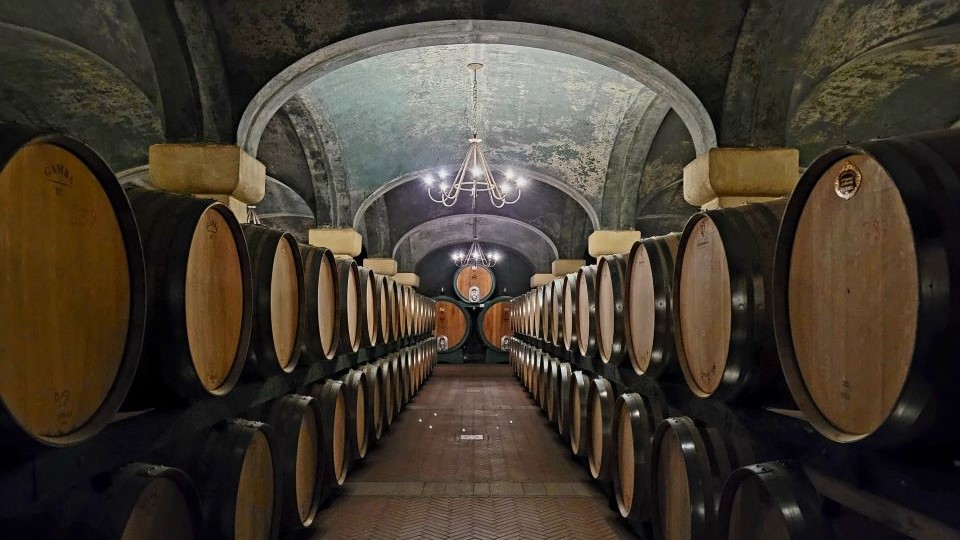 The vaulted cellars at Caparzo, in the northeast of Montalcino.

To Sum It All Up

In Montalcino, 2018 is one of the most unique and idiosyncratic vintages in memory, yet that’s not to say that the wines aren't enjoyable. These are fruit-forward and open-knit expressions of Brunello. At the top, the 2018s deliver a level of depth to support medium-term cellaring, but at the bottom, they are supple and easygoing. Production throughout much of the region is down due to humid conditions brought by continued rain through most of the season, along with hail events in April (of note, Valdicava lost so much of their production to hail that they chose not to make a 2018 Brunello). The year’s warmth was balanced, especially in comparison to current trends, leaving most to consider this a cool vintage by today's standards. Rain in September threatened the health of the crop, yet was mitigated in the south by fresh air currents and in the north by enough time before harvest to allow grapes to finish ripening under sunny yet cool conditions. Two thousand-eighteen is a producer’s vintage, where diligence in the vineyard and severe selection paid off. It is also a site-specific year, where some of the best terroirs produced wines that are shadows of their usual selves. Many winemakers report that they will not make a Riserva from 2018, which has helped strengthen the other wines in their portfolios.

The wines for this article were tasted on the ground in Montalcino through July 2022 and in our offices in New York City in the fall of 2022. We will add reviews of the late-bottled Brunellos as soon as I can taste them in early 2023.