Maison Leroy’s 1955 La Romanée Grand Cru is a historic wine for many reasons, and not just because of its age. It was the year Henri Leroy asked his daughter Lalou, then 23, to join the family business and help him select the wines for the maison’s portfolio. To this day, Lalou Bize-Leroy has an extraordinary memory of those early wines she tasted with her father.

La Romanée is nestled between Romanée-Conti and Aux Reignots, in the heart of Vosne-Romaneé. The Liger-Belair family has owned La Romanée, a rare monopole, since the very beginning. The vineyard as we know it today was created between 1815 and 1826 from a collection of six separate parcels in what was then called ‘Aux Echanges’. At just 0.8452 hectares the (about two acres) and is the smallest Grand Cru vineyard in France. Until 2002, when Louis-Michel Liger-Belair began to reclaim his family’s vineyards, the wines were vinified by the Forey family and then sold to négociants who raised, bottled and sold the wines. Henri Leroy had the exclusive from 1950 to 1962. Readers who want to learn more may enjoy revisiting my article Domaine du Comte Liger-Belair: La Romanée 1865 – 2014, which traces the history of the Liger-Belair family and La Romanée through an unforgettable retrospective in 2015 that was probably the greatest single tasting of La Romanée ever held. 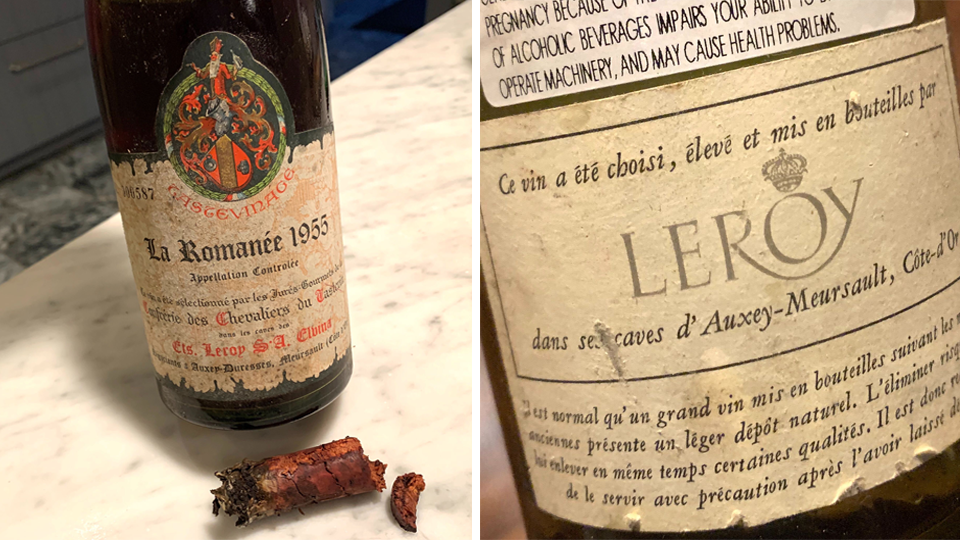 I must admit, my heart skipped a beat when I saw the bottle, taken from a dark corner of a friend’s cellar and gently prepared for dinner. I had only tasted the 1955 once, and it was not a perfect example. I looked at the bottle in front of me, a selection chosen for the Confrérie des Chevaliers du Tastevin, and my imagination started to run. What would the wine be like? The fill was low, lower than I like, to be honest, but then I remembered Aubert de Villaine telling me he never worried about fill levels if bottles had been stored properly. I nearly managed to extract the cork in a single piece, and was reminded once again that I do not have the temperament to be a sommelier.

The 1955 La Romanée Grand Cru is so sweet, so perfumed and so seductive. It just disappears from our glasses. Soaring in its aromatic intensity, yet silky and translucent, the 1955 is everything perfectly stored Grand Cru Burgundy should be. Wines like this have become so rare they are almost always reserved for epic, large-scale tastings that make it hard, if not impossible, to spend a lot of time with a single wine. On this summer night, it is just the three of us, leisurely enjoying the evocative beauty of the 1955 at a glorious plateau of maturity, accompanied by the great conversation and conviviality the world’s most iconic wines so often inspire. 94/Drink 2020-2025.