When I was at Château Pichon-Baron in June, Christian Seely finished my Bordeaux tasting with the three latest releases from Quinta do Noval, part of Axa-Millésime’s portfolio of properties. Seely told me that there was barely a drop of rain between May and the end of August. Fortunately temperatures were lower than in recent years, offering the vines some relief. Picking commenced on 9 September. The vines were given a little boost by showers on 21 and 22 September, so the final picking was made 14 to 17 October – six weeks of picking in total.

The 2019 Quinta do Passadouro Vintage Port comes from Pinhão on schist soils, undergoing 18 months maturation in wooden casks and just slightly less residual sugar (96gm/l) than the Noval and Noval Naçional. It has a rich and quite decadent bouquet with black plum, Christmas cake, marmalade and a touch of eau-de-vie. The palate is medium-bodied with a light sprinkling of white pepper, black cherries and boysenberry jam. There is a crisp line of acidity here and fine precision. It’s a little heady but not excessive. Excellent. 92/Drink 2029-2045. 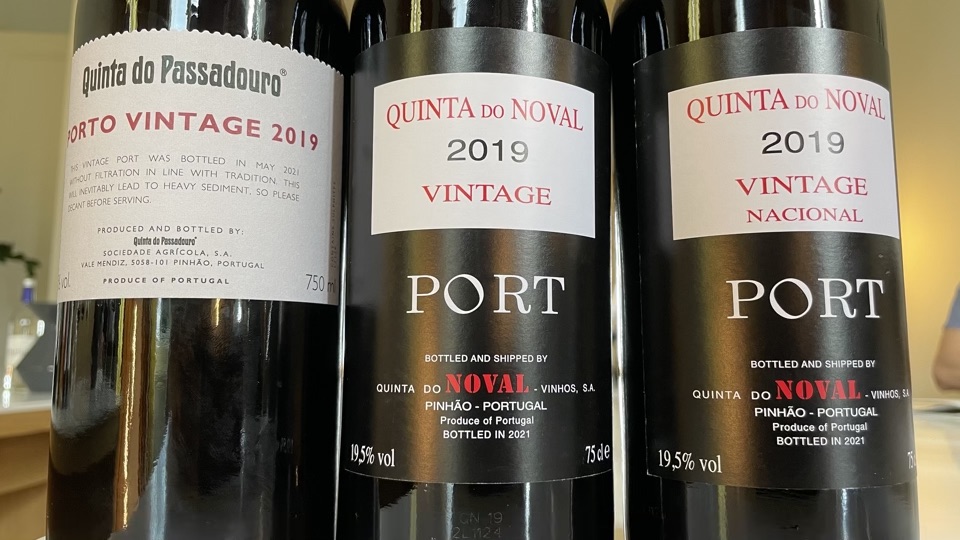 Noval has released 2,780 cases, equivalent to 15% of production, of the 2019 Quinta do Noval Vintage Port. A blend of Touriga Nacional, Touriga Francesa, Tinto Cão, Sousão, Tinta Roriz, foot-trodden in lagares with 18 months in oak barrel. This is well defined on the nose, with dusky black fruit laced with graphite and clove. A serious rendition when compared directly with the more “playful” 2019 Passadouro; hints of liquorice, eucalyptus and boot polish emerge with time. The palate is medium-bodied with vivid red and black fruit, liquorice and black pepper, crisp acidity with a structured finish. This is a fresh, tensile Noval that will age with style. 96/Drink 2032-2055.

Last but certainly not least, the 2019 Quinta do Noval Naçional Vintage Port comes from Noval’s un-grafted vines and undergoes essentially the same maturation as the regular Noval. It is more backward on the nose compared to the Noval, demands time to open, before eventually revealing black cherries, tar, tobacco and clove. A touch of smoke and eucalyptus make an appearance with time. The palate is absolutely sublime with a perfectly judged line of acidity; a Naçional that is full of tension and energy, finely chiselled tannins and an enthralling crescendo towards the spicy and peppery finish. This is quite profound. 98/Drink 2033-2070.