Why a piddling Bourgogne Hautes-Côte de Whatever? What numbskull chooses to cellar such low ranking Burgundy? And who the hell is Didier Montchovet?

Pull up a chair and let me explain why I chose this particular wine.

The first reason is simple. Global warming is no longer a conspiracy theory, and if it continues apace then the higher reaches of the Côte d’Or once deemed too cool to ripen grapes will become some of Burgundy’s most sought after vineyards. The spate of warm summers, this “new normal”, is already having a tangible and positive effect on the quality of the Hautes-Côtes de Beaune and Nuits Hautes-Côtes, which as one winemaker told me, in 2020 was around 3-4°C cooler than the rest of the Côtes d’Or. All it needs is an influx of talented winemakers, a trend already underway, coupled with a change in consumers’ mindset, and its day will come. Then we will look back and rue never having tucked away a few bottles instead of drinking them as soon as possible.

Now grab a pen and paper. Write down the most influential winemakers in the Côte d’Or over the last 30 years.

The second reason why I chose this wine is because Didier Montchovet should be on your list. For what its worth, mine includes Lalou Bize-Leroy, Henri Jayer, Jacques Seysses, Jean-François Coche and Aubert de Villaine, plus two less well-known, Jean-Claude Rateau and Didier Montchovet. 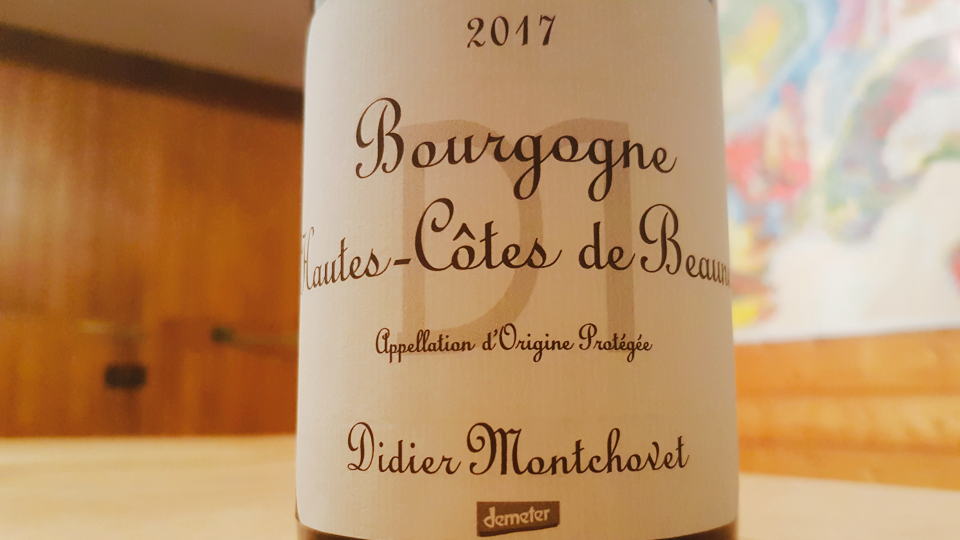 Alongside Rateau, Montchovet played a key role introducing the concept of biodynamic viticulture into Burgundy, the second to do so after Rateau, during an era when it was viewed with skepticism and ridicule. Together with his wife Christine, in 1984 Montchovet leased 0.5-hectares of vines where he applied organic/biodynamic viticulture. After expanding his holdings with another 2.5-hectares, he released his first vintage in 1990 and became one of the first biodynamic winemakers to be certified by Demeter. He attracted a handful of inquisitive vignerons to his winery in Nantoux, up in the Haute-Côtes behind Pommard, among them Lalou Bize-Leroy, Anne-Claude Leflaive and Aubert de Villaine. Inspired by what they observed in his vineyard and his livestock whose manure was used for compost, they applied biodynamics to their own more prestigious vineyards. Biodynamics began to be taken more seriously. Whilst Leroy and Anne-Claude Leflaive were being hailed as pioneers, the real revolutionaries such as Rateau and Montchovet were written out the story. Would that have been the case had either grower owned Premier and Grand Cru vineyards? I very much doubt it.

I will not argue that Montchovet’s wines were as profound as those of Leroy or others, but I will say this. The most interesting cellars are not those stacked with the predictable roll call of blue-chip growers and Grand Crus. They are ones that welcome bottles that are significant in terms of what they represent or how they influenced others. So when I visited Boris Champy, former winemaker at Domaine des Lambrays and the man who in 2020 bought the domaine and is continuing Montchovet’s tenets, I asked to taste an older bottle with a mind to writing it up as a Cellar Favorite and give him some belated kudos.

The 2017 Bourgogne Hautes-Côtes de Beaune was the penultimate vintage made by biodynamic pioneer Didier Montchovet. The nose takes three or four minutes to warm up, eventually revealing very attractive, tertiary-tinged red fruit. Scents of orange rind and mint eventually emerge. The palate is well balanced with a fine thread of acidity, quite vibrant and focused with good depth and structure. The finish accentuates that discrete menthol note with good length. Fresh and vibrant, I can envisage this offering 8 to 10 years of drinking pleasure. 89/Drink 2021-2030.