Forget the wine for one minute. Yeah, yeah, yeah. It’s DRC, the three letters that make Burgundy nuts swoon. Let’s come to matters fermented later. Dear Vinous readers, please spare a moment for the bottle of still natural mineral water that attends these shindigs. “BELU” is its name. There it stands on the table amongst the parade of Grand Crus feeling slightly out of place, as if it had received an invitation for the wrong party. It feels a sense of pride coming from some distant mountain spring, as fresh as the day it spouted from the earth, natural as can be. It looks askance at the eight bottles of Pinot Noir and asks: Do you sustain every single form of life on Earth?

No. Water does. Without it, we are nothing. 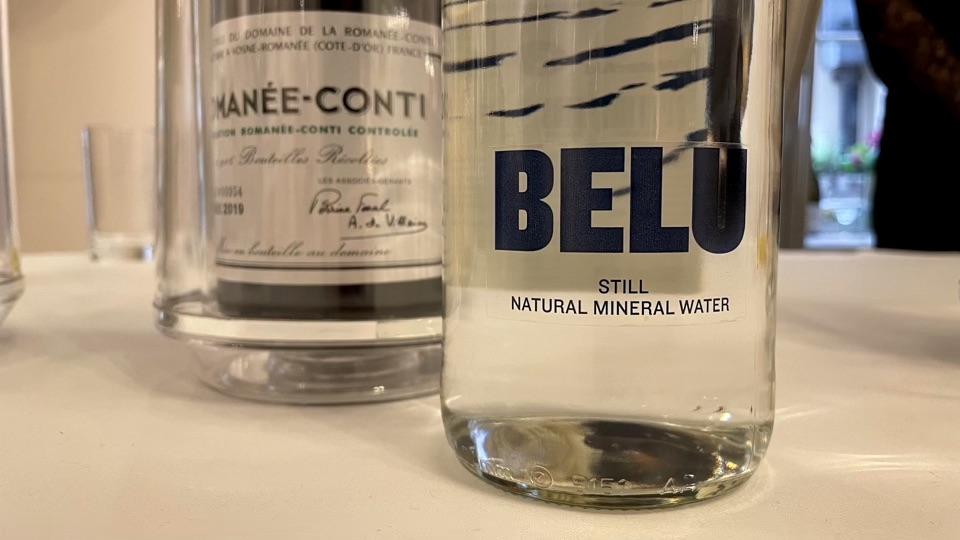 Yet none of these attendees seem interested in water. They’re too busy fawning over the wines, holding their glass of La Tâche as if it is the Holy Grail, itching to burst into a jubilant chorus of approval yet, as per instructions, remaining silent so that the room is as noisy as an empty library. Nobody seems interested in rinsing their mouth at this tasting, as if they don’t wish to rid themselves of the lingering afterglow of the wine. Granted, the mineral water does not taste quite as profound. It won’t age over many years. It will not be coveted by the rich and famous and it lacks intoxicating properties. But BELU did a sterling job during the Domaine de la Romanée-Conti tasting. It should be applauded for a job well done. I award it an unofficial 100-points. But now we must focus on the 2019s from the most coveted wine in the world.

After missing last year due to the pandemic, UK agent Corney & Barrow returned in 2022 with their annual tasting, thoughtfully with social-distancing measures, splitting the tasting into two rooms and allocating times where attendees should ring their doorbell. It was a bit like making an appointment at your doctors…

Co-directors Aubert and Bertrand de Villaine, together with Perrine Fenal, daughter of Lalou Bize-Leroy, had journeyed from Burgundy to attend the tasting. Nothing gave me more pleasure than to see Aubert de Villaine in fine fettle, in fact, the best I have seen him in several years. We chatted for a short while. I asked how he saw the differences between the 2018 and 2019 vintages given the similarities between growing seasons. He replied: “The 2018 is more like a dancer, whereas the 2019 has more power. I think the 2019s will be very approachable. There is nothing wrong with drinking them in the next few years.” 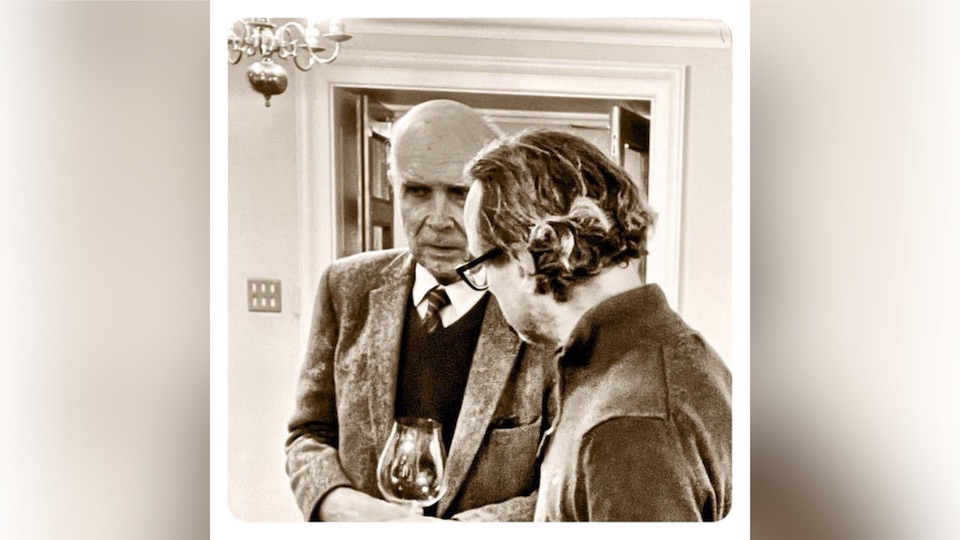 In discussion with Aubert de Villaine. I must thank the Mario Testino of the wine world, Greg Sherwood MW, for this photograph that he sent later in the day.

The 2019 vintage is significant in terms of the introduction of their second commercialised white, their Corton-Charlemagne. “I am very pleased with the Corton-Charlemagne,” de Villaine enthused. “There are four parcels that we vinified separately. One parcel had very high acidity, and we were wondering whether we should blend this. But when we did the assemblage, I was amazed. They were more than a sum of their parts. The parcel with the high acidity was actually an important part of the blend. The élevage is almost entirely in new oak using the same cooperages as we traditionally use for the Montrachet. But the two wines are very different. The Montrachet has a slightly more honeyed edge.”

The growing season has already been detailed in my 2019 in barrel reports (La Lumière Noire: 2019 Burgundy - Côte de Nuits and Côte de Beaune). To quickly summarise, a benign and clement spring allowed pruning, de-budding and biodynamic treatments relatively easy to undertake. Vine growth accelerated during a hot May. Hydric stress spun-out the flowering over 15 days, so there was significant coulure and millerandage, reducing potential yields. Hot days and cool nights defined the first part of summer with a heatwave from 24 to 30 of June and a second at the end of July where the mercury reached 40°C causing some grillure and some vines to shut down. In fact, average temperatures were higher in 2019 than in 2003, which, as de Villaine points out, demonstrates how their vines have adapted to warmer conditions in recent years as the vineyards remained green. Véraison was at the end of July, and thereafter, berries rapidly increased sugar levels; a potential alcohol of 11% on 26 of August reached 12.5% just seven days later, eventually achieving 13-14%. Despite this, they waited for phenolic maturity before the first pickers were dispatched on 14 of September to tackle the younger vines in La Tâche and Romanée-Saint-Vivant (picking dates presented in the tasting notes for each cuvée.) In 2019, the domaine used between 90% and 100% whole clusters, the Romanée-Saint-Vivant slightly less at 80%. The wines were bottled during February and March 2021.

Of course, one has to remain as objective as possible tasting these hallowed wines and in this respect, I call on my experience, the context of having attended this exact same tasting since 1997, which does make me feel rather old. Whilst tempted to taste these wines at the Domaine during my autumn round of visits, personally, I prefer to give them a year in bottle so that can settle down. 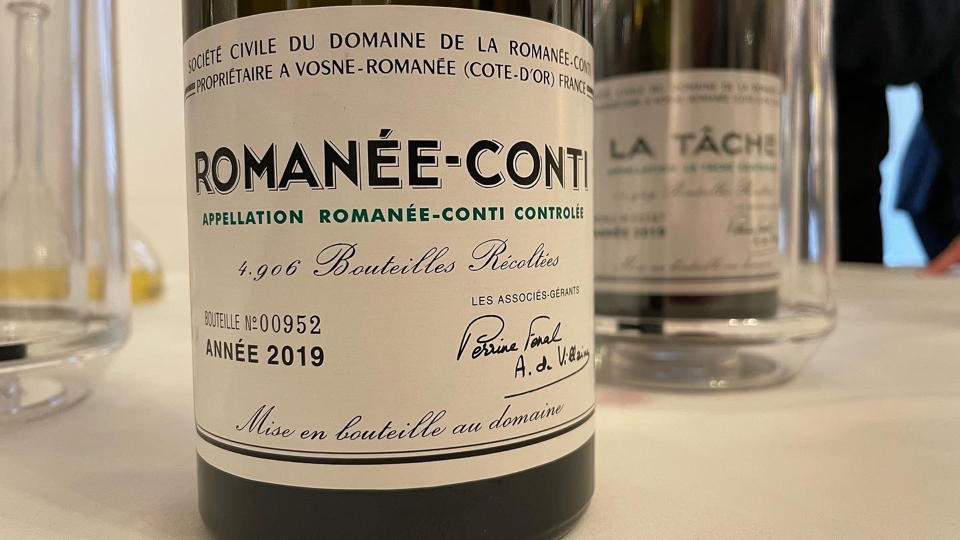 It might be predictable, but the 2019s are exquisite, maybe only the Echézeaux a little dictated to by the growing season, whereas I found other cuvées represent unalloyed articulations of their respective terroirs. Perhaps what struck me this year was the fragrance and complexity of the 2019 Romanée-Saint-Vivant that just soared on the nose, that reduction in whole bunch an assiduous decision. I remember that in barrel, the Richebourg was the more flattering of the two, but in bottle, there is a reversal, and the Romanée-Saint-Vivant conveys more charm and joie-de-vivre. Meanwhile, the 2019 Romanée-Conti repaid patience by allowing it to unfold in the glass for 10 minutes before penning even the first word of my tasting note. What can I say…utterly profound.

As for the Corton-Charlemagne, I was pleased to see it ticked all the boxes that I expect from this Grand Cru apropos weight and texture. I loved the wine, yet I feel that it leaves room for even greater success in the future, just as I felt when DRC introduced their Corton in 2009. Chatting to Aubert de Villaine, I could sense that despite numerous vintages under his belt, he relished this new challenge, this new vineyard. It will be fascinating to compare it side-by-side with the Corton-Charlemagne from Bonneau du Martray to gauge their differences. 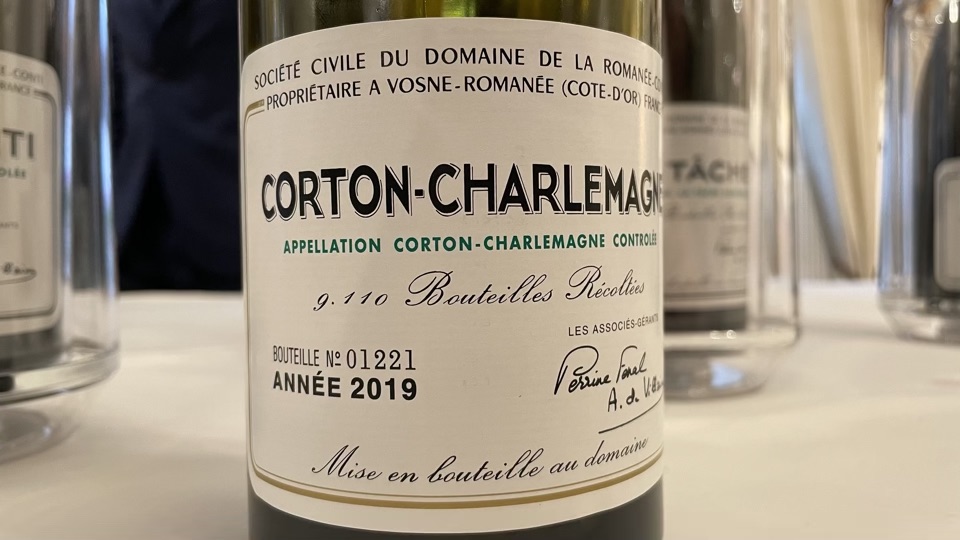 Really, these notes are academic because the world will fight over allocations of these wines, demand outstripping supply by ever-increasing multiples. Everybody knows that. But as I have said before, these are expressions of the Côte d’Or, no different to any other Burgundy producer, using an identical grape variety with similar viticulture and winemaking methodology. Strip away the label and what do you get? Well, the answer to that is some of the most exquisite expressions of Pinot Noir you could ever dream of tasting. No, it does not come cheap. Then again, the finest things in life never do.

It is true. We are nothing without water.

But life would be nothing without wine.