An Update From Burgundy

Two years ago, on a Saturday night in late June, I was walking back to my hotel in Beaune when it started. Once you’ve heard that sound, you will never forget it. It is the sound of hail, small pellets of ice that can wreak havoc on vineyards. Almost two years to the day later, on the afternoon of June 28, 2014, I heard it again. From where I was in Beaune, the two small storms didn't seem too bad. The hailstones were smallish, and the showers were both pretty brief relative to 2012. When I saw the vineyards in the days that followed it was another story. The damage in the worst cases was potentially as severe as in 2012, but what marks this storm from others was the vast swath of destruction that hit villages in the Côte de Beaune all the way up to the southern edge of Chambolle-Musigny in the Côte de Nuits. The worst damage was once again in Beaune, Pommard, Volnay and Meursault, where some sites were literally shredded by hail that was so violent it ripped leaves and clusters of grapes right off the vine. 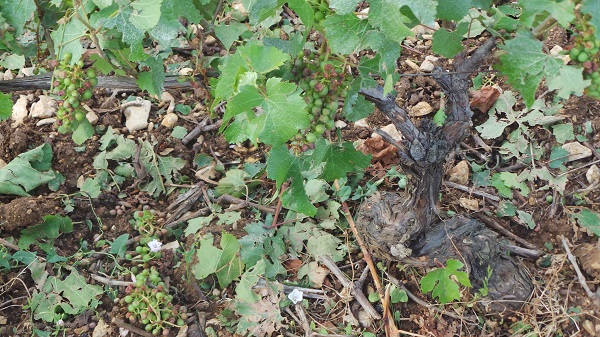 Meursault Les Poruzots, July 4, 2014, one of the most damaged vineyards in the Côte de Beaune. Note the clusters and leaves on the ground.

The last time Burgundy had a normal harvest was 2009. Yields in both 2010 and 2011 were both down by 30-40% from long-term averages, which, absurdly, doesn’t seem so bad now. Hail was an issue in 2012, with some places hit in June, July and August. Nowhere were conditions more severe than in Volnay and Pommard, where production was down by as much as 90%. Yields were down again because of hail in 2013, a long cool year, but not as much as in 2012. The 2014 growing season had gotten off to a strong start. Conditions during flowering were nearly perfect. Excess heat in some places was a small issue, but for the most part a healthy and generous crop was forecast. Vignerons and winemakers were happy. The first week I was in Burgundy this summer, in late June, everything looked great. That all changed within just a few minutes. As it turned out, the Monday following the hailstorm, my appointments were mostly in the Côte the Beaune. It was the hardest day in my career as a professional wine critic. What could I possibly say? Nothing. I just listened. 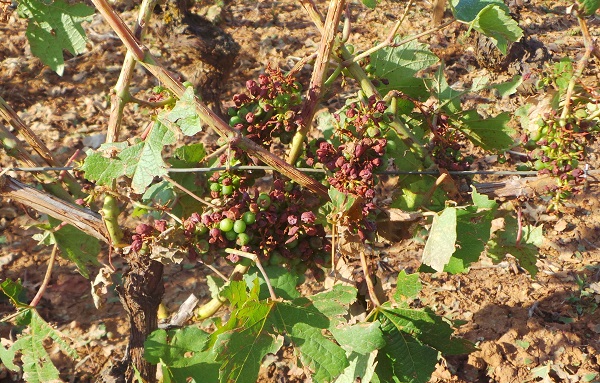 Beaune Boucherottes, July 3, 2014. The southern sector of Beaune was once again devastated by hail.

Burgundy is now looking at another vintage with severely diminished yields. Most estates can handle one vintage with low production. Some can handle two. I don’t think there are too many wineries anywhere in the world that can absorb three consecutive vintages with punishingly low yields. I fear greatly for this community of hard-working families, many of whom are now facing economic challenges that are virtually unthinkable. The psychological effects of watching six months of toil and labor destroyed in the matter of a few minutes is just devastating for the families that work this land. At this point in the season, hail only impacts quantity. It is far too early to make any judgments at all about quality. By the same token, there are still two months left to go until harvest, which means there is also the risk that other storms might inflict further damage. Burgundy was under a hail warning again on Saturday July 5, but thankfully heavy downpours seem to have been the worst of that storm system. 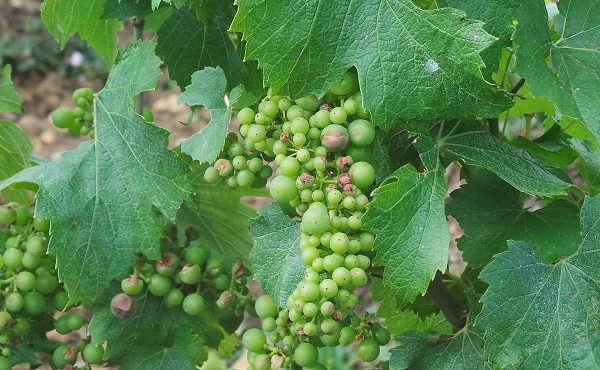 Chassagne-Montrachet La Maltroie, Monday June 30, 2014. Hail in Chassagne was much less extreme than in other parts of the Côte de Beaune. The damaged berries will eventually dry out and fall off the vine.

This is the story of the June 2014 hailstorm, as told by the vignerons themselves.

Frédéric Barnier (Jadot)– “Everyone talks about Pommard, Volnay and Meursault. To be sure, those villages were ravaged. But don’t forget about Beaune. Go take a look at the southern sector of Beaune. Places like Clos des Mouches, Boucherottes and Les Avaux are just decimated.”

Lalou Bize-Leroy – “This is the first year of experiments with cloud seeding. I am not at all convinced of the approach or the results. For starters, seeding is highly polluting and therefore not a good thing for the environment. More importantly, though, this was a storm of unprecedented dimensions. Usually hail is highly localized. Here, we have a storm that damaged vineyards spanning a full 35 kilometers (22 miles) from south to north. I started working with my father at the winery in 1955. I have never seen anything like this.”

Henri Boillot – “I am 60 years old and have had a very rewarding career. I am not worried about myself. But what do I tell my son, Guillaume, who joined the winery four years ago? He has seen three out of the last four harvests ravaged by hail. Is this a good career for a young person to pursue? I don’t know the answer to that.” 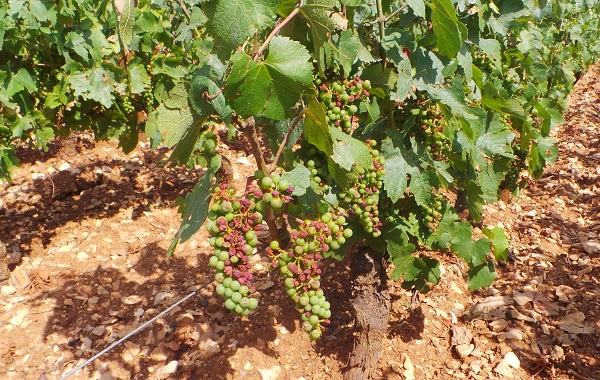 François Carillon – “It’s hard to say at this stage, but I expect a loss of around 25% in Combettes and Folatières, and at least 10% elsewhere.”

Jacques Carillon – “Champ Canet is the hardest hit of my vineyards. I expect to be down 30-40%. My other premier crus have about 20% damage, while village-level vineyards have minimal damage of around 5%, which is pretty negligible relative to what other growers face.”

Guillaume d’Angerville – “We are devastated. Hail fell for seven minutes in our vineyards. The hailstones were especially large and dry, with high ice content and sharp, angular contours. To make things even worse, the hail hit vineyards at an angle, which inflicted the highest amount of damage possible.” 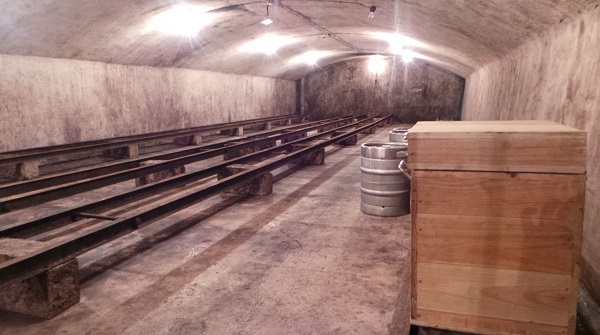 Marquis d’Angerville, Volnay. The 2012s should have filled this cellar. Sadly, production will be down sharply again in 2014.

Aubert de Villaine – “I think a little perspective is in order. The last vintage in which we had significant hail damage in Vosne was 1983. As a result of the storm, we expect to see losses of around 25-30% across all vineyards, but on what was shaping up to be a generous crop. And of course, our colleagues in the Côte de Beaune are suffering to a far greater degree. All things, considered, we can’t be too upset.”

Mathilde Grivot – “We are down around 25-30%, including parts of Échézeaux and Richebourg. Many of our colleagues are far worse off, though. We will get through it.” 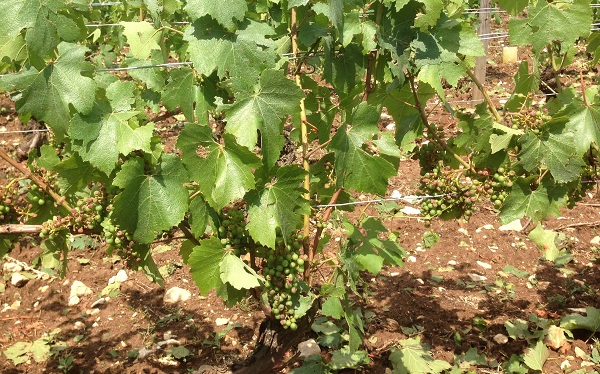 Dominique Lafon’s Clos de la Barre, June 30, 2014. Damage is at its worst in the center of the vineyard, away from the walls that provided some shelter.

Dominique Lafon – “All our vineyards were significantly impacted by the storm. It will take a few days to know the full extent of the damage, but it is likely to be high.”

Christophe Perrot-Minot – “All of our appellations were hit. I estimate a loss of about 15-20%. As long as there are no further weather events, we should be OK.”

I am not sure what the solution or solutions are. Insurance is expensive and only reimburses owners for the cost of labor done in a vineyard damaged by hail, not for the value of the crop or the wines that would have been made. Hail nets, used in other regions for vineyards and fruit trees, are not allowed by regulations, but are probably worth taking a look at. Cloud seeding does not appear to be meaningfully helpful. What is clear is that the survival of many small families is under direct threat, and along with it, the viability of some of France’s most famous appellations.