This year’s Domaine de la Romanée-Conti tasting of the 2019s was quite poignant. It was the first public event I attended post lockdown; curiously the 2020 edition was the last I participated in pre-COVID. It was also Aubert de Villaine’s final year presenting the wines as Co-Manager of the domaine, a position he has held since 1974. Beyond the wines, there was a palpable feeling of gravitas in the room, a distinct sense that something of historical significance was taking place.

For my part, I was delighted to be super-punctual. Two years ago I barely arrived before the tasting started. I made a valiant attempt to sneak into my assigned seat unnoticed, but was not successful. So, things started better. Also in attendance this year were Bertrand de Villaine, Aubert’s nephew, and Perrine Fenal, Lalou Bize-Leroy’s daughter, the two new Co-Managers of the domaine. “Good to see you are on time; you have a reputation for being late,” Bertrand de Villaine says as he introduces to me to Perrine Fenal, who I am meeting for the first time. Great, I am thinking to myself.

The format is as it has been for the last few years. The domaine presents the new vintage to a group of about a dozen or so writers in a private, sit-down tasting hosted by importer Wilson-Daniels, who has represented the wines since 1979. It’s a great way to go through the wines at a leisurely pace. As always, a few library bottles are added for further reference. We taste through the entire range, including the new Corton-Charlemagne, the rarely seen Vosne 1er Cru and the Montrachet, which is not often a part of this tasting in other countries, most notably in the UK. 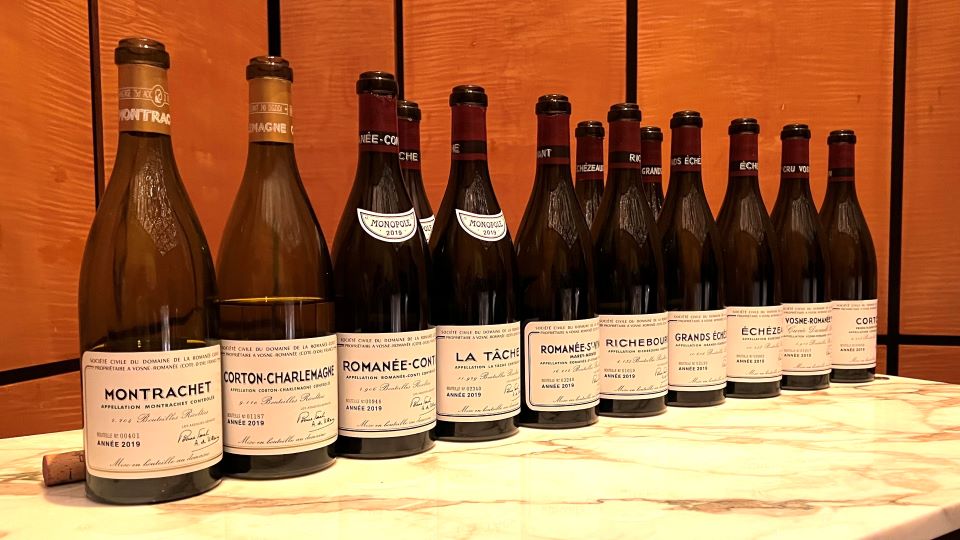 “It’s my last year presenting the new vintage,” de Villaine says in his opening remarks, clearly sensing the importance of the moment. The man has had an extraordinary life, including presiding over the domaine and its many shareholders over what has unquestionably been its greatest period ever. Just as importantly, de Villaine has made massive contributions to the reputation of Burgundy as a region, among other achievements in a brilliant career that has spanned seven decades.

“Winter was not especially wet” de Villaine explains as we start go through the wines. “Heat arrived in May. By then, the vines were already lacking in water. Irregular weather resulted in a drawn out flowering that took three weeks to complete. We had quite a bit of millerandage. As a comparison, in 2018 flowering took just three days. So, going in, we knew we were looking at smaller crop, with about a 20% loss in yields. We had heat events at the end of June, in July during veraison and then in August. A break arrived in September, but by then we were already at 13-13.5% natural alcohol. We could have waited for a bit more phenolic ripeness, but we wanted to avoid overripeness, so we began picking on September 14. It is an unusual year in which the Montrachet, which often comes in at the end of the harvest, was picked at the beginning, on the 15th.”

I vividly recall the first two heat events, as I was in Burgundy at the time. The late June spikes took place during the Musique et Vin festival. Temperatures were stifling to the point that even air conditioning in hotels and restaurants could not keep up. It was much the same story a few weeks later.

“I am often asked to compare the 2019s to another vintage, but that is very hard,” de Villaine continues. “To find wines like this, we have to go back to ’65….1865,” he says, taking a beat like a veteran stage actor. “Have you ever had an 1865 Burgundy?” Perrine Fenal asks me in a hushed tone. “Only one…La Romanée,” I reply, trying to mimic de Villaine’s phrasing. 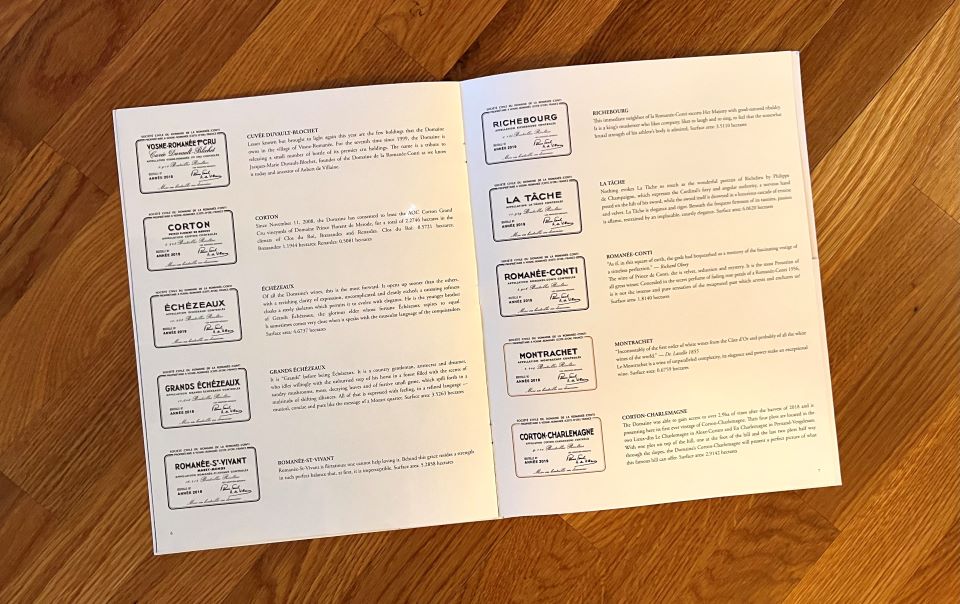 The ten 2019s in this year’s presentation, in an excerpt taken from the tasting booklet.

In looking at the wines, well, they are pretty special. My favorites are the Grands-Echézeaux and Romanée St. Vivant. In bigger years, the GE is often exceptional. It is that and more in 2019. What a wine. Romanée St. Vivant always speaks to me. Of course, that is quite personal. The 2019 is a fabulous edition. Readers should expect bold, potent wines across the board. One thing I did notice in the 2019s is a greater presence of new oak than I recall seeing in the past. Most of the 2019s show notes of coffee/torrefaction that aren’t typical of young wines here. Whether that is oak or the natural richness of the year is hard to say based on one tasting. As always, the wines are done with a very high percentage of whole clusters that is more or less evident depending on the wine. The one wine that is a question mark is the Richebourg, which is a real outlier in this tasting. My impression is of a Burgundy that shows signs of heat stress and/or of fruit that may have been picked a bit earlier than ideal.

“What do you think about the whites?” Aubert de Villaine asks me across the table. I remind him of what he opined a few years ago, when I was doing research for a vertical of the domaine’s Montrachet. “Antonio, serious wines are red,” de Villaine told me back then, almost dismissively, amused at my interest in the Montrachet. “Do you feel the same way today?” I ask. “I feel that way more than ever,” is the reply. “But you don’t always want ‘serious’ do you?” de Villaine adds with a mischievous twinkle in his eye. And that is that. 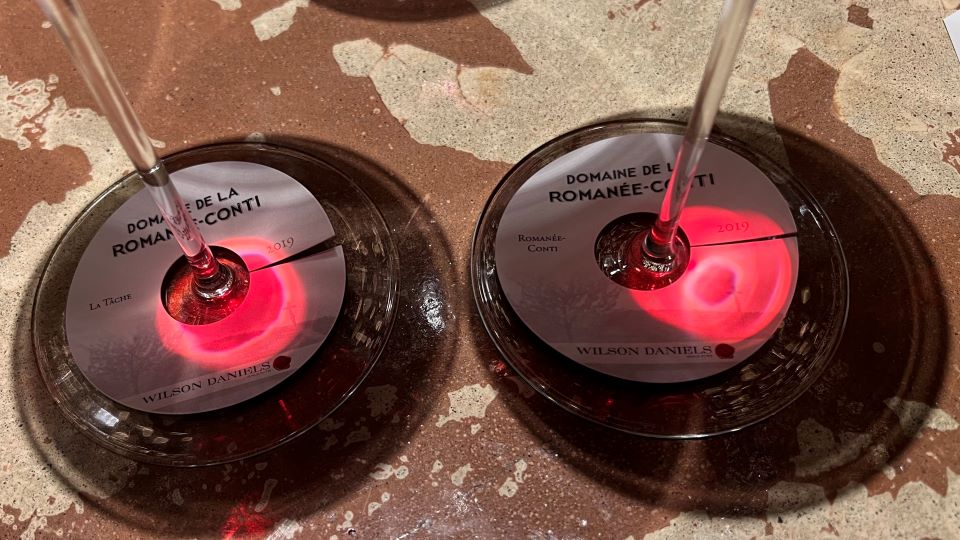 A rare chance to taste La Tâche and Romanée-Conti side by side, with plenty of wine and time.

As I walked back to my office, I could not help but reflect on how much Burgundy has changed, just in the last twenty years or so. I feel incredibly fortunate to have spent time in Burgundy when the wines were still affordable, before they became objects of desire coveted by the world’s most well-heeled collectors and speculators. The truth is that very little of this wine, especially at the top level, ends up where growers, importers and distributors think it does. But that is a story for another article and another day.

When I first started visiting DRC in the mid 2000s, Aubert de Villaine did all the tastings himself. These were one on one tastings, just the two of us. We would start in one cellar and taste the vintage in barrel, then move to the other main cellar to taste the bottled wines, the starting point alternating each year based on the location of the wines. There was never anyone else there. It was a great opportunity to assess the wines in a calm environment, to ask questions and to learn.

I have so many great memories of those days. Probably my favorite was when I tasted the 2015s from barrel. It was an early morning appointment, 8:30 or 9am. As always, there was a sense of solemn calm in the cellar. We got to the Romanée-Conti, which the domaine asks visitors not to spit. As if that’s a problem. Anyway, de Villaine takes out his pipette and fills my glass with a shocking amount of wine. It is a Unites States steak house Cabernet Sauvignon type of pour, if you know what I mean. I do what I always do. Take a small sip, write a note, ask a few questions, then take a second sip, always careful not to take too large of a serving. I go to put my wine back in the barrel, but de Villaine has already closed it. We exchange glances. “Drink it, it’s good for you,” he says. Who am I to argue? Let’s just say it was probably the best start of a day I have ever had in Burgundy!

Sadly, moments like this are increasingly a thing of the past. Elite domaines now routinely do tastings for small groups rather than individuals. They have to. Otherwise they would have no time to do their job, which is to make wine. I get it. But it’s just not the same. And that ability to speak directly with a vigneron, one on one, is among things that are, sadly, being lost in Burgundy.

So, as much as this article is about the DRC 2019s, there is only one real message that I would like to convey.