Jadot’s long-time winemaker Jacques Lardière spent a good deal of 2012 on a year-long retirement tour worthy of a rockstar. He earned it with four decades-plus of memorable wines. It seemed like every few weeks there was a magnificent tasting somewhere in the world celebrating one of the truly great careers and people in wine. I was privy to one of these tastings, held at Jadot’s headquarters in Beaune. This article focuses on the Beaune Theurons, while a companion piece covers the Corton-Charlemagne. 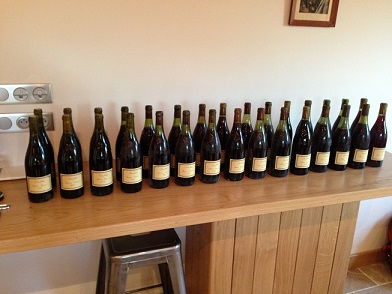 With his gregarious personality, wicked sense of humor and flowing grey locks, Jacques Lardière doesn’t look like someone who is about to retire. It is virtually impossible to believe Lardière has been at the helm since 1970! During the several hours we spend tasting through the 2011 reds and the wines in these two verticals, Lardière’s energy is just as intense as it has been on every previous visit. Readers can see Lardière in action in the short video we shot at the maison right after this tasting.

Louis Jadot inherited a parcel in Theurons from his wife’s side of the family in 1900. The vineyard measures .89 ares, or just under one hectare. Major replantings were carried out twice, beginning in 1985, using selection massale, a method by which clones are selected from within a vineyard and then propagated throughout the same site.

Beaune reds are often overlooked in favor of their more famous cousins from the Cote de Nuits, largely because those wines can be so sexy and showy when young. Beaune reds tend to need a little more love and bottle age to soften the tannins, but there is little doubt the best wines can develop extraordinary complexity with bottle age.

Jadot’s 1997 Beaune Theurons jumps from the glass with juicy dark cherries, scorched earth, licorice, tar and incense. At 15 years of age, it remains youthful primary and full-bodied, with just the faintest hints of tertiary complexity. Slight elements of gaminess give the 1997 a rustic side that isn’t present in some of the very best editions. Today, the 1997 is an in between stage where it is neither young nor old. I suggest giving it a few more years in bottle. Lardière adds that 1997 was a very hot year with naturally low yields, and that he waited until quite late in the season to harvest. Drinking window: 2017-2027.  A drop dead gorgeous wine, the 1993 Beaune Theurons is still remarkably fresh and vibrant, something that is immediately noticeable in its color. The tannins are big, yet silky, while the fruit is remarkably sophisticated. Cool veins of minerality frame the polished finish. It is hard to see the 1993 maturing anytime soon, rather it is much more likely the wine will drink well for another 20 years. This is a dazzling effort. Drinking window: 2013-2043. Jadot’s 1990 Beaune Theurons is huge on the palate.  Still rich, powerful and voluminous, the 1990 bursts from the glass with massive dark fruit. Sweet red cherries, cured meats, earthiness, licorice, spices and worn-in leather are all layered together in this full-bodied, intense Burgundy. Readers who like fully mature wines may want to cellar the 1990 further. Today it is stunning. Drinking window: 2013-2030.

The 1989 Beaune Theurons is the first wine in this tasting where the tannins are totally resolved, but at the same time, the aromas and flavors are bright, focused and fresh, especially for a wine of this age. Although at a beautiful plateau of maturity, the 1989 has enough to drink well for another 10-15 years, if not longer. In some ways, the 1989 is a bit of a paradox. It is more finessed than the 1990, even though the weather was warmer and yields were higher. There are none of the gamy notes found in the 1990, just layers of impeccable, perfumed fruit. The potential and sheer appeal of Beaune reds comes through in spades. Drinking window: 2013-2023. One of the biggest surprises in this tasting, the 1988 Beaune Theurons is stunning. Youthful and weightless yet structured, the 1998 is still vibrant. The aromas and flavors are quite bright, and the tannins remain virtually impenetrable, as if the wine is frozen in time. The 1988 will never be a huge, dense Burgundy, but it has a very good chance of developing into an extraordinarily finessed wine with a few more years. Drinking window: 2013-2023. The 1985 Beaune Theurons represents a hugely attractive synthesis of the 1989 and the 1990, with the aromatics of the former and the fruit of the latter. Sweet, perfumed and layered, the 1985 has developed gracefully in bottle. Savory herbs, flowers, dried cherries, plums, tobacco and anise are layered into the silky, polished finish. Drinking window: 2013-2030.

The 1983 Beaune Theurons is a solid effort in a challenging vintage marked by high amounts of rot. Even today the acidity is quite pronounced because maturity levels were only average. The 1983 has aged as well as could be expected, but it will never be particularly refined. At the same, time, at nearly 30 years of age, it has held up nicely. Worn-in leather, tobacco, dried flowers and sweet herbs are layered into the articulate finish. Drinking window: 2013-2023. Jadot’s 1982 Beaune Theurons is magnificent. A firm, yet expressive wine, the 1982 is peaking today, with all the elements in the right place. Dried cherries, leather, sweet tobacco and cedar are woven together in the glass. Structured, yet beautifully balanced, the 1982 is a great choice for drinking over the next two decades. Lardière describes 1982 as one of the most generous vintages of all time, but one characterized by healthy grapes. As in 1999, Lardière did some saignée (bleeding) of the must. Drinking window: 2013-2022. Another impressive wine, the 1979 Beaune Theurons is strikingly beautiful from start to finish. This is the first wine in the tasting that is fully tertiary, but at the same time, it retains gorgeous vitality, showing the way Beaunes can remain at a plateau of maturity for years. The aromas aren’t quite as perfect as I had hoped, but the wine is remarkably finessed on the palate. Hints of sweet tobacco, anise, dried herb, mint and worn-in leather frame the finish. The pure silkiness of the tannins is something to behold. Drinking window: 2013-2019.

The 1978 Beaune Theurons is surprisingly delicate and frail in this tasting. Mint, wild flowers and savory herbs waft from the glass. The 1978 retains its broad-shouldered frame, but the aromas and flavors are a touch forward. This isn’t a huge 1978, but rather a finessed, delicate wine that has aged quite gracefully. In 1978, the fruit was harvested at the end of October, very late by Burgundian standards. Drinking window: 2013-2020. Another utterly majestic wine, the 1976 Beaune Theurons has aged also exceptionally well. Huge dark red cherries, tobacco, mint and wild flowers all jump from the glass. The high percentage of new oak has shaped the 1976 nicely, giving it smooth contours and gorgeous balance. Simply put, the 1976 is a pure joy to taste. The dry growing season resulted in tiny yields. Drinking window: 2013-2023. A wine of tenderness and voluptuousness, the 1973 Beaune Theurons is stunningly beautiful. Silky tannins support a deep, supple core of fruit in this polished, textured Burgundy. All the elements are simply in the right place. At forty years of age, the 1973 is peaking, but it also appears to have plenty of life ahead. Lardière adds that the 1973s were very difficult to sell because of the oil crisis. Readers who might still own bottles of the 1973 Theurons are in for a real treat, let’s leave it at that. Drinking window: 2013-2023.

White truffles, dried berries, mushrooms, earthiness and game emerge from the 1972 Beaune Theurons. Interestingly, the 1972 is much more advanced in its aromas than it is on the palate, where the fruit is surprisingly rich and intense for the year. Overall, this is a solid effort in a very challenging vintage. Readers still holding the 1972 will want to finish any remaining bottles. Drinking window: 2013. The 1971 Beaune Theurons bursts from the glass with huge fruit in a style that captures the silkiness of the 1973 and the firm structure of the 1976. Exotic spices, autumn leaves, orange peel and roasted coffee beans are woven together in a fabric of unusual grace. Layers of intensely perfumed fruit linger on the ethereal finish. Simply put, the 1971 is singing today. This is a great, great showing. Drinking window: 2013-2023. Vibrant, layered and structured, the 1970 Beaune Theurons is still quite firm and youthful. Today the 1970 is in a glorious place where all the elements are very nicely balanced. Although a bit virile in style, the 1970 is also exceptionally polished. Best of all, it has stood the test of time, and then some. Drinking window: 2013-2023.