Whenever I need an anecdote to clarify the inflation of Burgundy prices over recent years, I tell how one Tuesday night after work, my cousin came to my tiny flat in South London for supper. This would have been July 2003. I rustled up my signature dish of spaghetti Bolognaise and before you ask, no, I didn’t make my own sauce, I dumped a jar of Dolmio sauce into a frying pan of beef mince like anyone else who cannot cook. It deserved a decent splash of red fermented grape juice and I was in the mood for Pinot. Since my cousin and I go back a long way, I pulled out a bottle of 1996 Chambertin Grand Cru from Domaine Armand Rousseau. I had recently bought it for about fifty or sixty quid and I probably splashed a few drops into the sauce. My cousin approved. I thought it was delicious, albeit too young. We had a thoroughly enjoyable evening, little realizing that we had just polished off a bottle that 17 years later would cost you around £50,000 a case, about the price of the very flat we were drinking in. We had essentially drunk the equivalent of my living room.

I had only tasted this Rousseau once since then, at The Arches, served blind by the great Harry Gill, rest his soul. A bottle came around again in the summer of 2019 when a friend flew over from Hong Kong for dinner at Noizé, one of my first outings after my operation. The tasting note was planned to be included in a forthcoming tranche of mature Burgundy, however the photograph was so easy on the eye and the wine of such sentimental importance, why not parse it out for a Cellar Favorite. 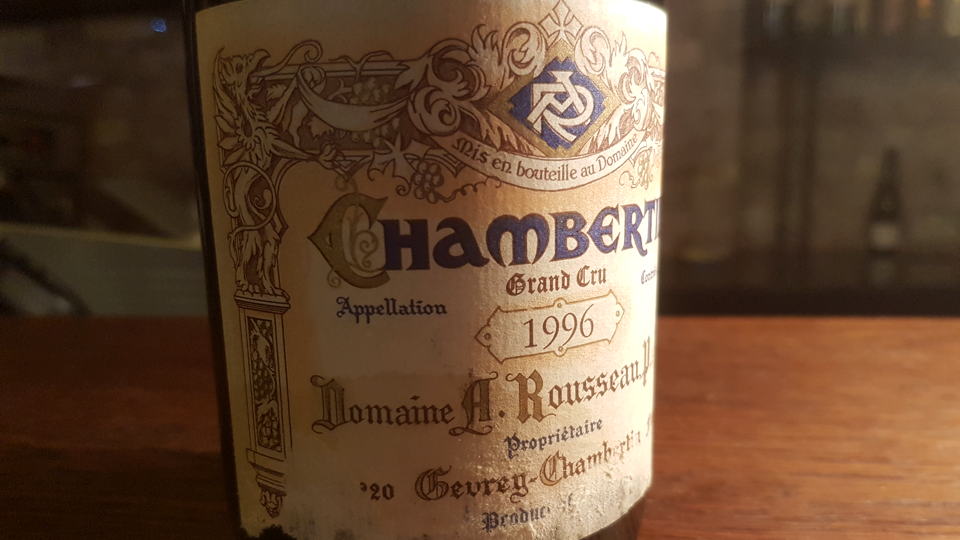 Now at 23-years of age, the 1996 Chambertin Grand Cru shows a little bricking on the rim, appropriate with its age. The nose is as fragrant as I remember: wilted iris petals gently waft from the glass, cool and reserved. Indeed, I found this bottle initially aloof and standoffish, like many Côte de Nuits this vintage, before developing more fruit intensity, mainly black rather than red laced with loam and Earl Grey. The palate is just beautifully balanced. It is a stout and swarthy Chambertin so much so that you risk overlooking what for a 1996 is its filigree tannin structure. The fruit profile becomes redder towards the finish with a kiss of sour cherry and orange rind that all feel so precise and sophisticated. This multi-faceted and cerebral Chambertin is reaching its lofty plateau. 97/Drink 2021-2040.